Houston may not be a place that comes to mind as a targeted travel destination such as Paris, a national park or beach resort. But if you’re in town for business, family visits, sports, special events like the annual rodeo, or driving through Texas on a road trip, you might want to spend a little extra time finding out what’s up in downtown when you visit Houston. Here’s what I found on my first time in Houston. 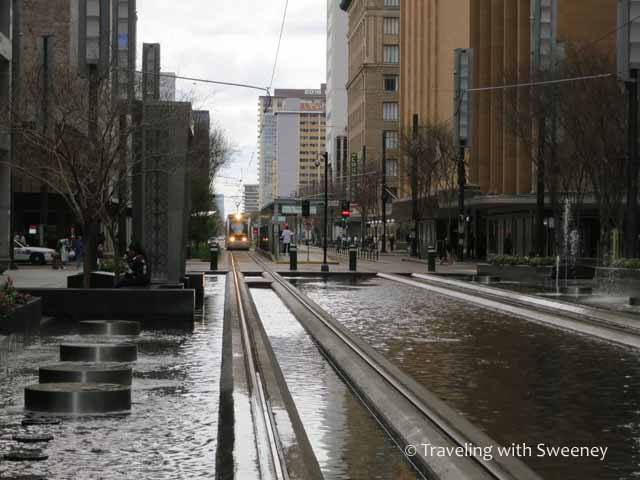 In many large cities, the downtown sidewalks are bustling with workers and shoppers while passing buses and taxis blast their horns. The streets of downtown Houston are relatively quiet and suggest a much smaller city. One of the reasons is that the city’s businesses and population aren’t concentrated here. Rather, Houston is quite spread out over 579 square miles. Another reason is Houston’s tunnel and skywalk system. (Click here for a pdf version of the tunnel system map.) 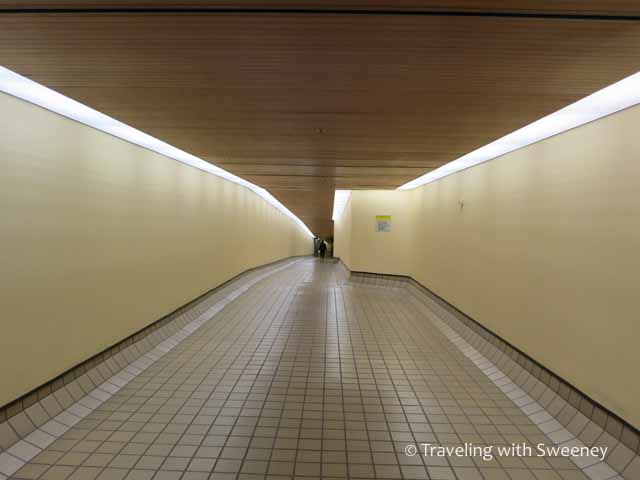 Below the streets of Houston are seven miles of underground passageways that along with several skywalks link office buildings, retail and dining establishments, hotels and theaters throughout downtown. The tunnels are open Monday through Friday between 6 a.m. to 6:30 p.m. primarily so that workers can more comfortably get around during Houston’s hot and humid summers and sometimes stormy weather conditions.

In downtown Houston, you won’t find high-end shopping like that on Chicago’s Michigan Avenue or New York’s Fifth Avenue. Houston’s upscale shopping district lies about nine miles west of downtown at The Galleria. But the tunnel system leads to many other retail stores in the Skyline District, such as The Shops of Houston Center with its impressive skylight ceiling. 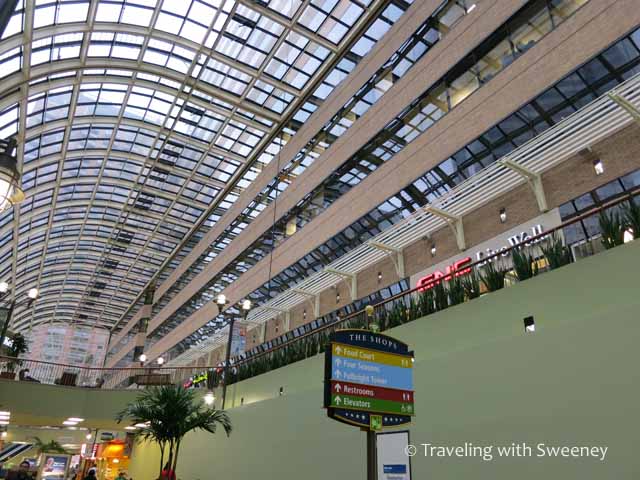 The Shops at Houston Center

North of the Skyline District is an area of several blocks that was once the center of old Houston and where many original buildings remain. Back when cotton was more important to Houston than oil, the Houston Cotton Exchange was run in this building, constructed in 1884. It now houses offices and a bar. 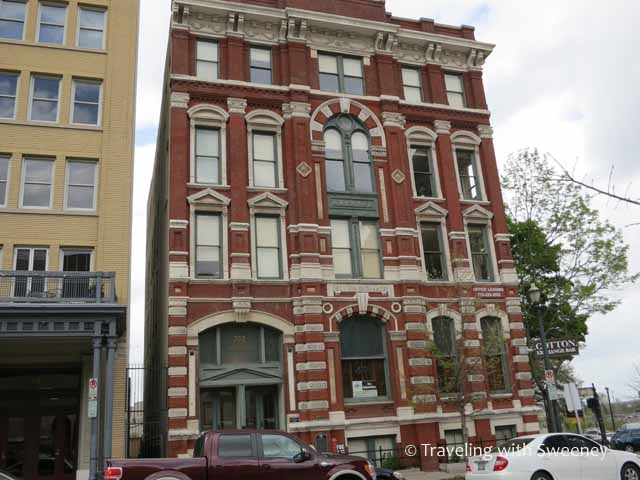 The Historic District’s Market Square Park is a popular place for lunch, strolling the grounds or running your dog at the dog park. Around the square are restaurants and cafes in buildings that date from the 1880s. There’s also a very nice memorial at the square, “Lauren’s Garden”, a tribute to Lauren Catuzzi Grandcolas, a Houston resident who died aboard United Airlines Flight 93 on September 11, 2001. 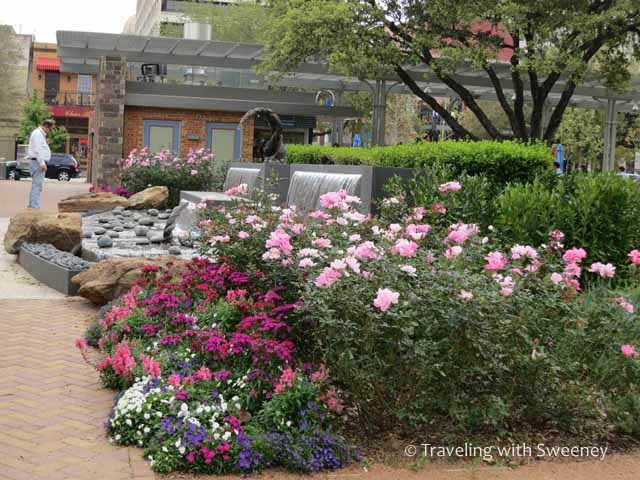 Although during the day you may notice quite a few empty retail and restaurant spaces, I’m told that the Historic District comes alive at night. There are numerous bars and clubs such as Char Bar, Sambuca, Warren’s Inn and Dean’s, a thrift clothing store turned hip bar that once a month also showcases Texas-made short films. 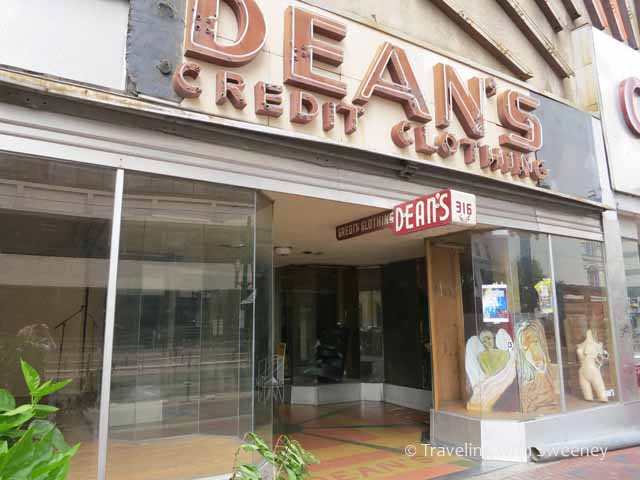 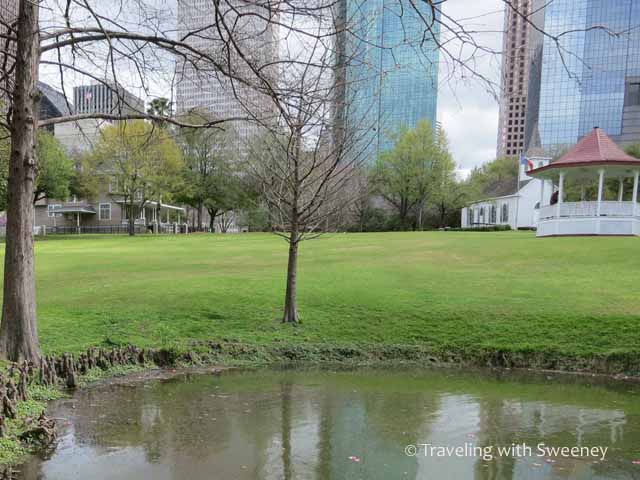 Just below the skyscrapers of Houston’s Skyline District is Sam Houston Park, a lovely area with walkways, pond, gardens, and gazebo. The Houston Heritage Society maintains several of Houston’s oldest buildings that are located in the park. Built in 1823, “The Old Place” is thought to be the oldest remaining structure in Harris County. 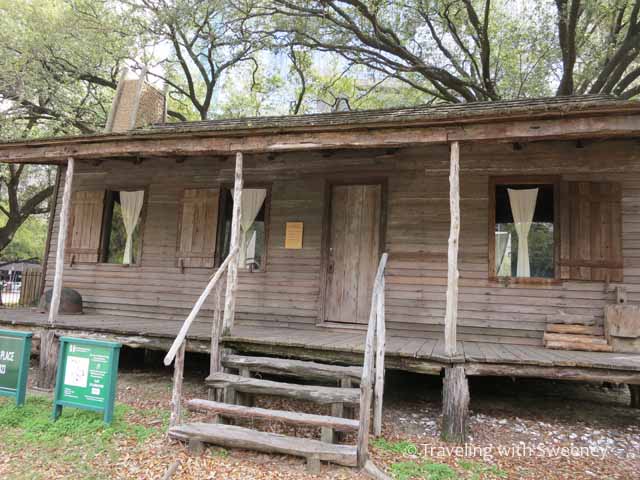 You just might see these little guys around the pond in the park. 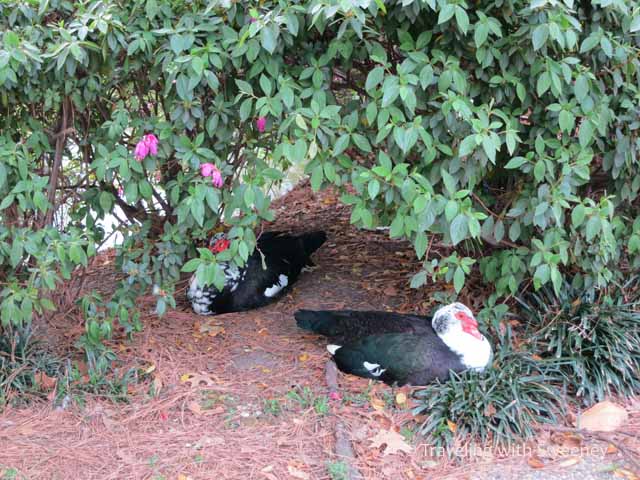 Across Interstate 45 from Sam Houston Park is Buffalo Bayou Park and the Sabine Promenade where there is hiking, biking, canoeing and kayaking on Buffalo Bayou. 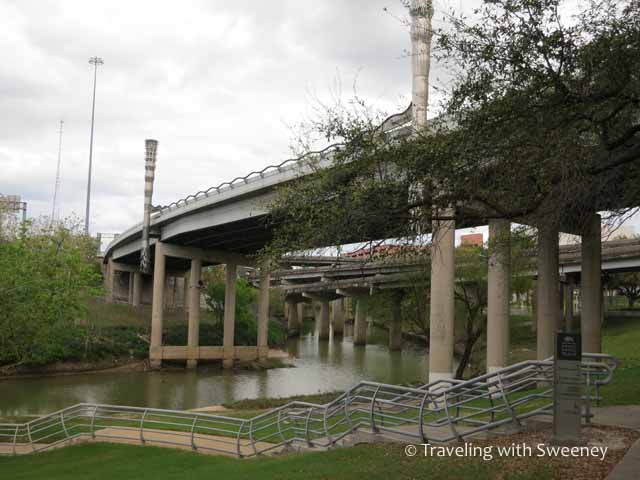 Discovery Green on the eastern edge of downtown was opened in 2008. It’s located on 12 acres directly in front of the George R. Brown Convention Center between Minute Maid Park and the Toyota Center. The park has a lake, dog runs, playgrounds and a restaurant. 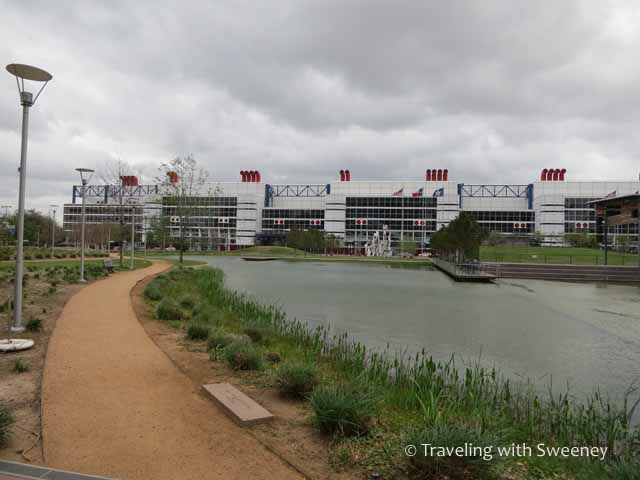 I rather like this photo I took at Kinder Lake in Discovery Green. 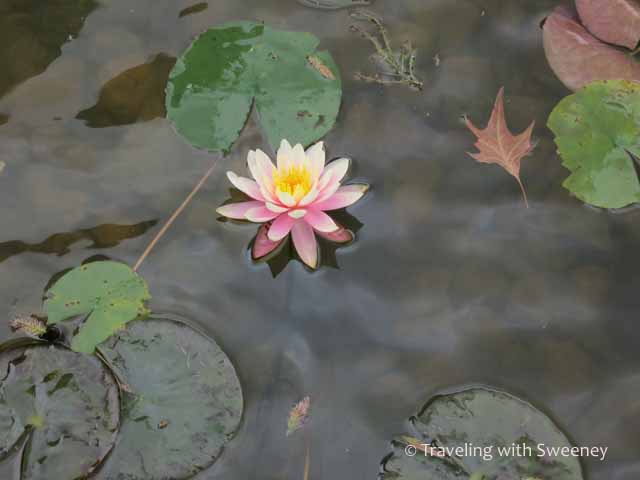 If you like a good steak, Houston won’t disappoint you. I had steak dinners two out of three nights. At Massa’s, my filet mignon was served with a large portion of au gratin potatoes and sauteed mixed vegetables. Do you think I finished it?

But don’t fret if you don’t like steaks. Houston has many other restaurant options, farmers markets and specialty foods markets. At Phoenicia Specialty Foods, I found a wide selection of gourmet food items, freshly prepared entrees, delectable desserts and fresh bread, including their award-winning pita bread. 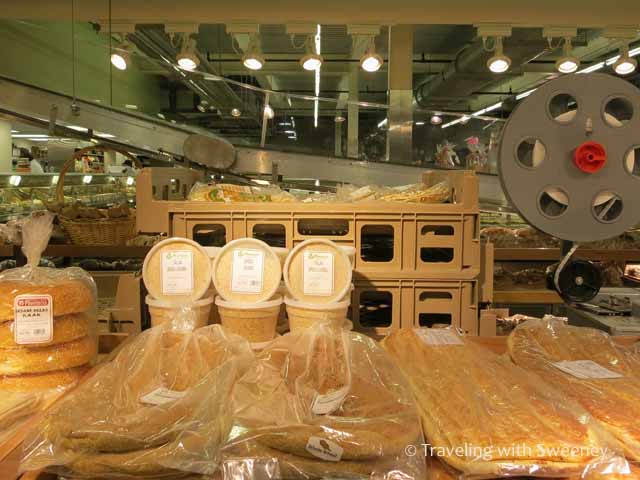 One of my favorite things to do in any city is to visit art museums and galleries. I was very impressed with Houston’s Museum District which includes the Museum of Fine Arts, Holocaust Museum Houston, Natural Science Museum, Weather Museum, and the Houston Zoo within easy access of the METRORail system. 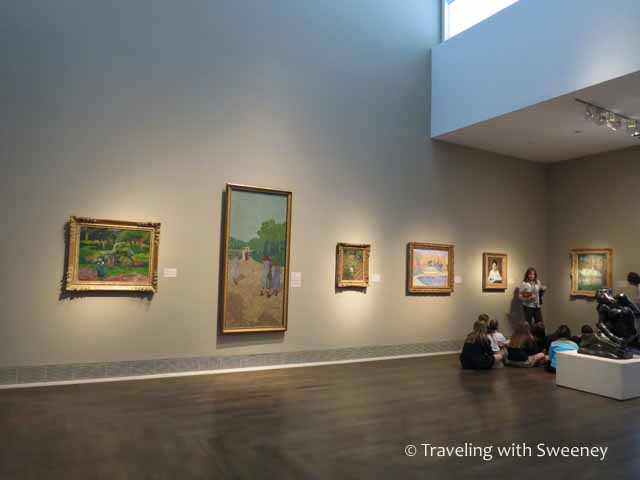 The Museum of Fine Arts consists of two buildings and a sculpture garden with over 60,000 works. I enjoyed listening to the groups of children visiting the European Art galleries as they eagerly asked their guide questions about the art they were seeing and gave their opinions.

Symbol of hope at Hermann Park

Also in the Museum District is Hermann Park which has a series of plazas containing fountains, monuments and statues. The Richard and Annette Bloch Cancer Survivors Plaza features the sculpture “Cancer…there is hope”, by sculptor Victor Salmones. It depicts patients just entering treatment and those who have successfully completed treatment exiting the maze. Hermann Park seems an appropriate location for this exhibit as the world-renowned Texas Medical Center with over 40 institutions, including 13 hospitals is nearby. 6 million patients from all over the world are cared for at Texas Medical Center each year. 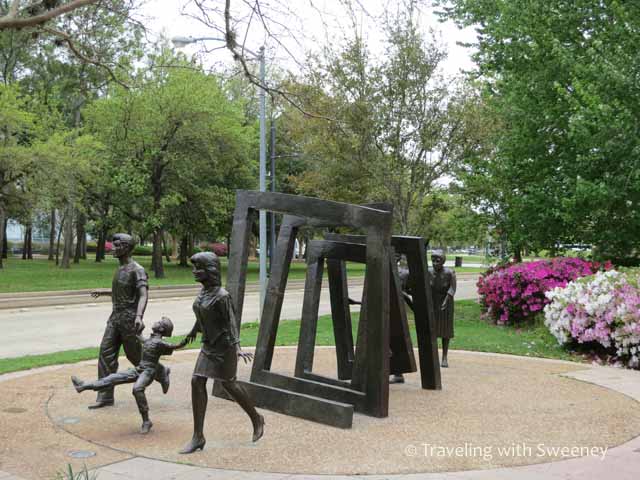 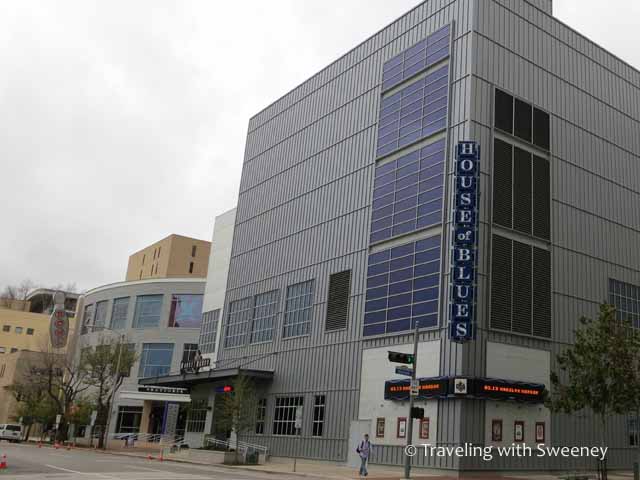 Although country music is a popular genre, it’s not the only entertainment available. It’s not surprising that one could find a blues club in Houston, but I was surprised by the sign on the House of Blues announcing Marilyn Manson’s upcoming performance in May. He’s not exactly B.B. King. 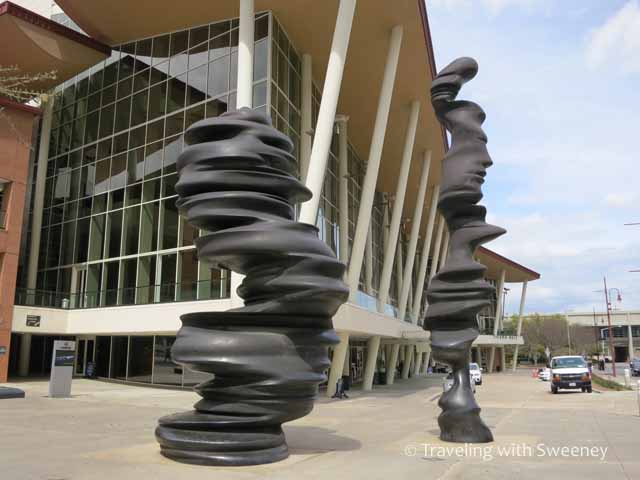 Stop and think about it 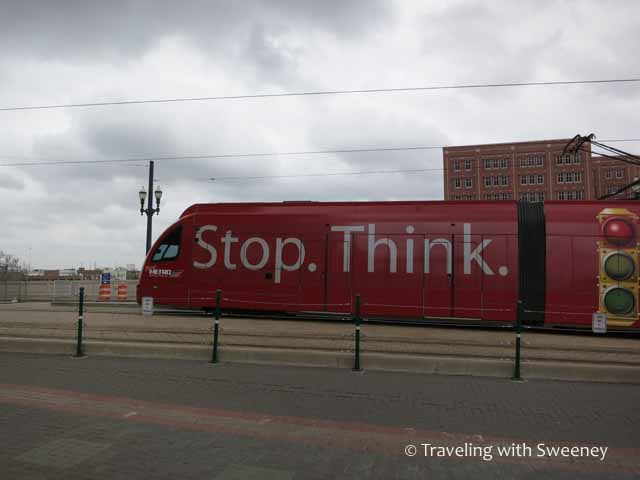 Would you consider a Houston visit?

I’d like another chance to see more museums, spend time in the parks; venture further afield to places like NASA’s Johnson Space Center and Galveston; and perhaps more importantly, I’d like to complete my mission to find the best ribs in Houston.

Downtown transportation tips: Cab rides are a flat $6.00 anywhere downtown. The program is called “Six in the City”. The METRORail trains run 7.5 miles down the Main Street Corridor from the University of Houston Downtown in the north to Reliant Park in the south.

34 thoughts on “Houston: It’s not Manhattan”