Although our stay in Venice was just a few days long, I felt that we experienced a lot of what makes this magical and romantic city so special. 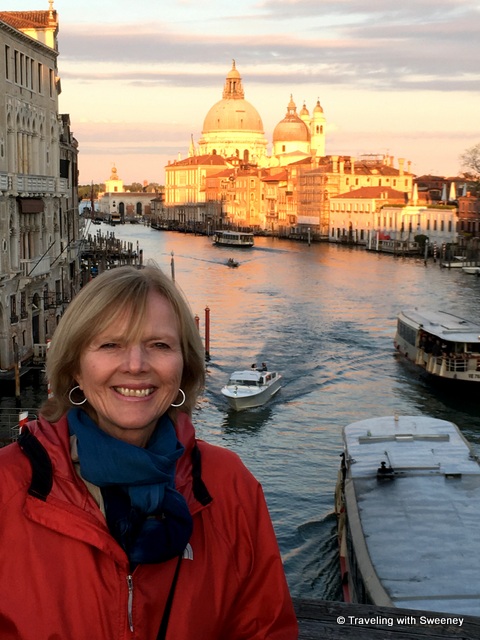 Of course, you’ve probably heard that Venice can be very crowded with tourists in any season, but a visit in the spring will beat the summer throngs. We scheduled our time in Venice to work with a previously set itinerary for visiting other destinations in the Veneto region. That meant that we were visiting during one of the busiest times of the year — the weekend of Liberation Day in April, a national holiday bringing people from all over Italy to Venice to mark the occasion. But we found that although major sites such as the Rialto Bridge and Piazza San Marco were crowded, there were better times to visit those sites (in the morning or late evening), and by veering off the main tourist areas there were many interesting and less-crowded places to stroll and enjoy.

On our cruise to Venice from Portegrandi on the Silis, a tour boat operated by Navigazione Stefanato, we cruised the lagoon admiring the colorful buildings on the island of Burano and stopped on Murano Island to see a glass blowing demonstration at the famous Murano Glass Factory. 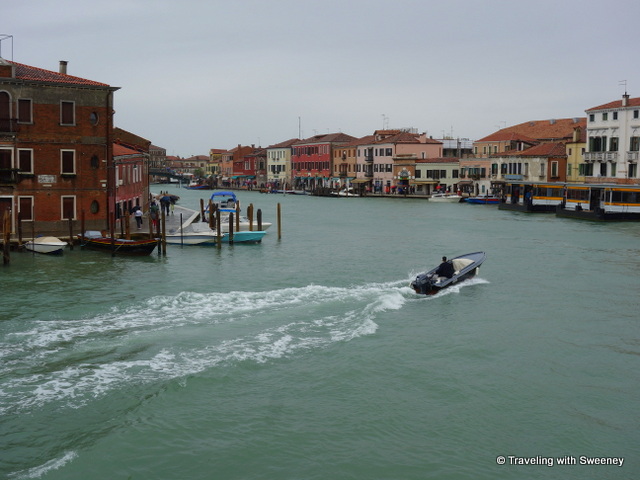 Murano Island in the Venetian Lagoon

As we left Murano to head toward Venice, the sky became grayer and the rain picked up which added to the excitement and feeling of intrigue during our slow approach. The conditions also gave a surreal look to the city. I think that the photos we took (shown below) have a look much like Medieval frescoes or scenes in old-fashioned painted postcards. 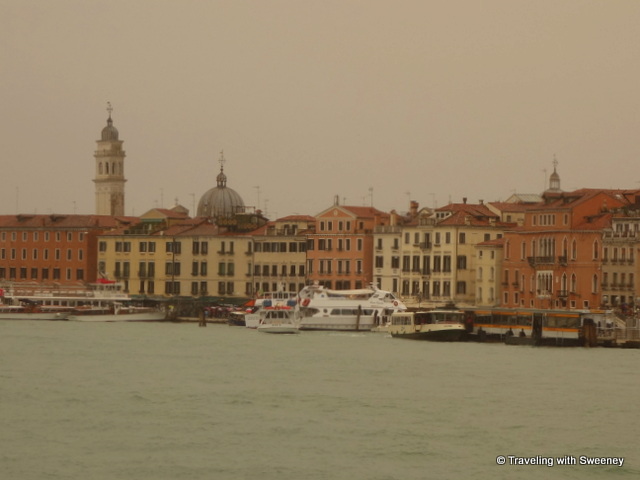 Approaching Venice in the rain

St. Mark’s bell tower and the Doge’s Palace seen from the boat as we approached 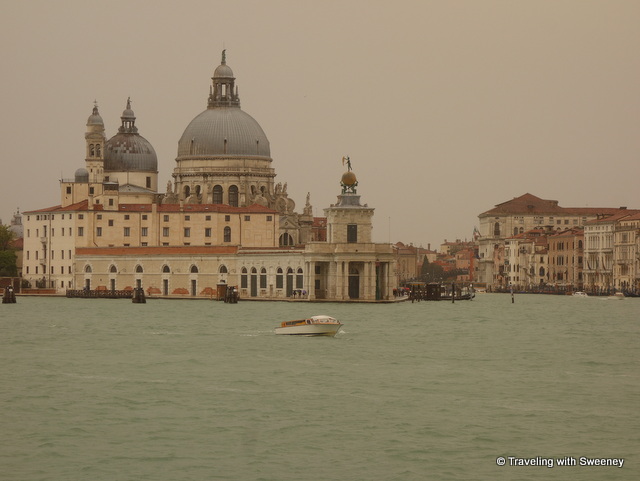 Once in Venice, the main way of getting around on the waterways is by vaporetto (water buses) and water taxi (for getting to/from Marco Polo airport). Gondolas are seen everywhere but are mainly for sightseeing and having a quintessential Venice experience, not so much for getting from place to place.

Piazza San Marco (St. Mark’s Square), one of the largest and most beautiful squares in Europe, is awe-inspiring. It seemed to always be bustling with people the numerous times we crossed the square during the visit. Its famous attractions are St. Mark’s Basilica, the adjacent clock tower and the Doge’s Palace, but there are also many shops, restaurants, and cafes. The piazza was beautiful on an overcast day, in the bright sunlight, and especially at night with the lights on all of the buildings. 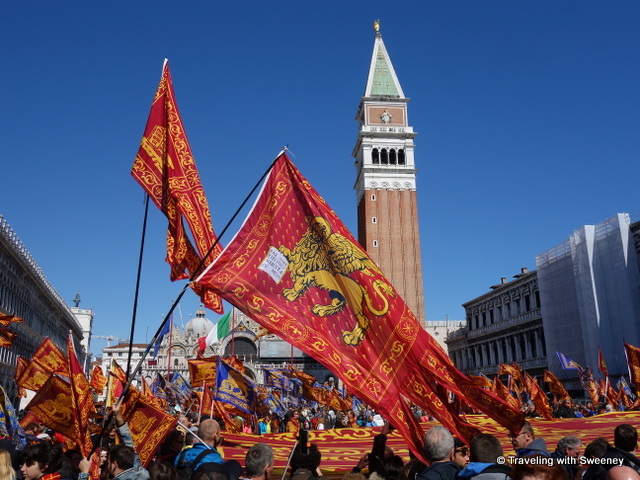 We felt fortunate to be there on April 25th, Liberation Day, which celebrates the end of Nazi occupation in World War II and also the end of the Italian Civil War. It was exhilarating to watch the planned festivities as well groups and individuals waving red Venetian flags promoting Venetian independence from Italy. 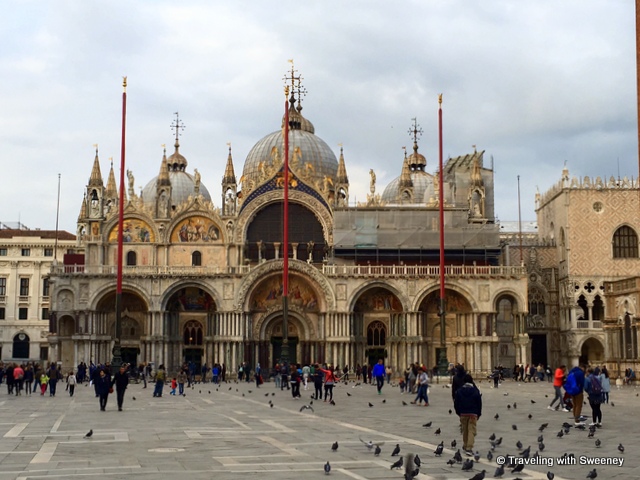 St. Mark’s Basilica is named for the patron saint of Venice, St. Mark the Evangelist. It is one of Venice’s most recognizable landmarks beneath its iconic bell tower and adjacent to the Doge’s Palace. We took a Walks of Italy VIP night tour of the basilica tour to beat the crowds and we got so much interesting and entertaining background. April 25th is the Feast of St. Mark so there were special flower arrangements on the altar and the panels in the railing were removed so that worshippers on Saint Mark’s Day could fully see the altar where Saint Mark’s remains are said to reside. 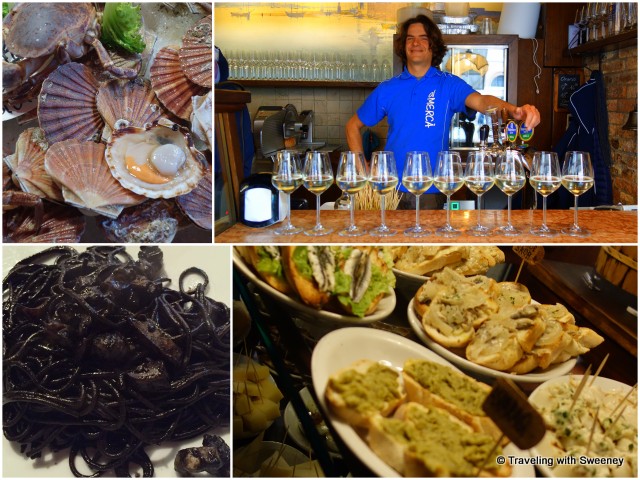 Enjoyment of food and wine accompanied with conversation is part of Venetian culture. We found a wonderful way to be introduced to eating like a Venetian and get tastes of cicchetti (small bites, snacks) and wines of the Veneto region on the Walks of Italy Venice Food Tour, The walking tour allowed us to experience two bacari (cicchetti and wine bars); squid ink pasta for lunch; and the local fish, meat, and produce markets. In late April, we were there in time to enjoy the amazing white asparagus of the Veneto region.

Many of the city’s senior residents slowly make a daily routine of making their their way from one bacaro to the next for food, wine, and meeting friends.

Walking around and getting lost

It’s very easy to get lost in Venice’s maze of narrow alleys, bridges, and squares and those times were some of the highlight of our time there. Just steps away from the main attractions, you can escape the crowds to feel that you’re alone. 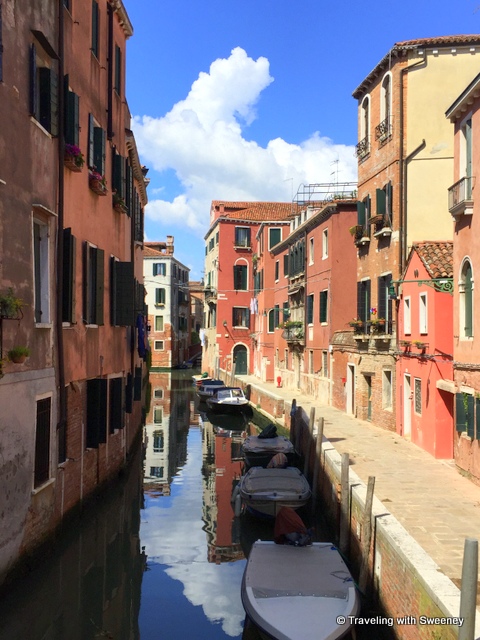 The pretty and serene places you can find strolling through Venice

While taking in the intriguing canals, bridges, gondolas and gondoliers, we came across captivating views. 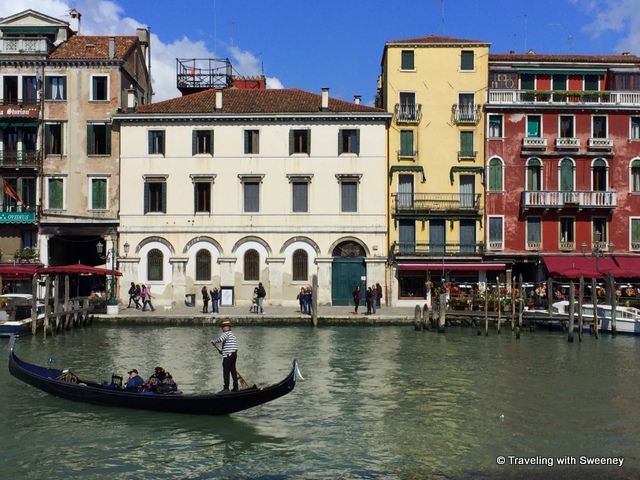 Classic Venetian scene — a gondola on the Grand Canal 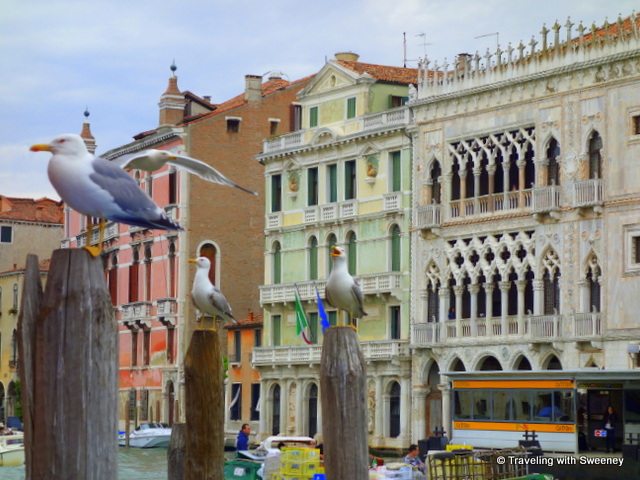 One of my favorite scenes was the one below of the Basilica di Santa Maria della Salute from the Accademia Bridge over the Grand Canal at sunset (also the location of the photo at the top of the post). 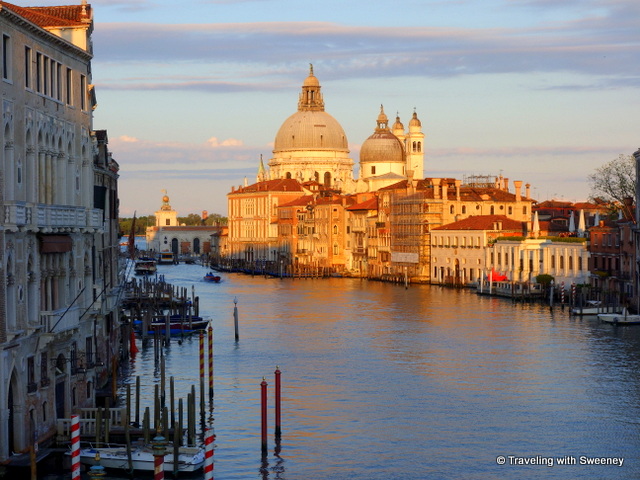 View from the Accademia Bridge

Listening to the music

I highly recommend attending a concert to further enhance the visit and immerse yourself in the music that beautifully reflects the history and romance of the city. Interpreti Veneziani holds string concerts in several venues in Venice. 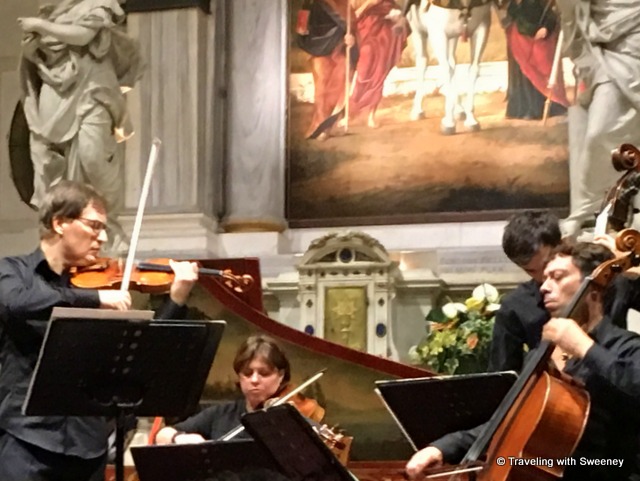 We attended an extraordinary concerto at the beautiful Church of San Vidal featuring the works of Antonio Vivaldi who was born in Venice in 1678. The musicians and acoustics were excellent. 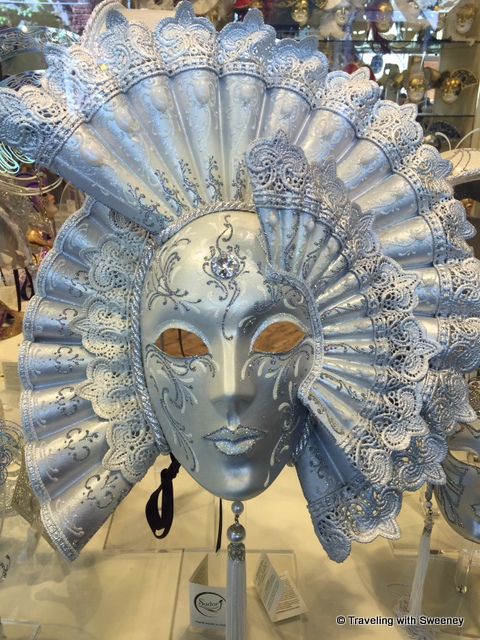 Perhaps we’ll get back to Venice for Carnevale sometime. I would love to wear this mask that we saw in a specialty costume shop. Wouldn’t you?

19 thoughts on “Venice: Our Favorite Things”