How many ways are there for getting around Budapest? 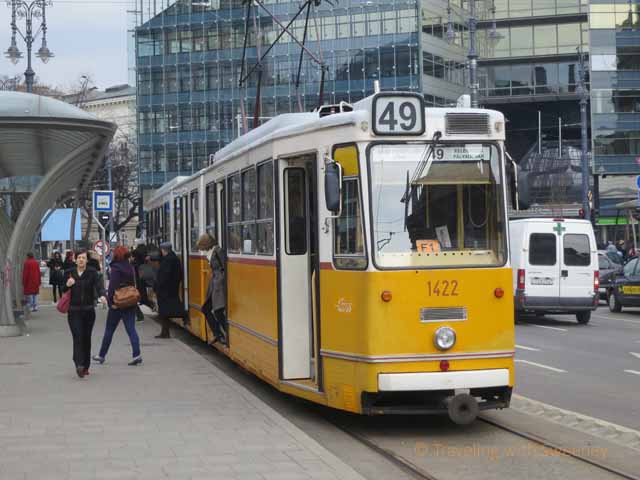 Getting around by tram in Budapest

We’ve always looked at “getting there” as part of the fun while traveling, even within a city. On our recent trip, we found Budapest to be one of the easiest cities to get around quickly. It was one of the reasons we liked Budapest so much, and we used a variety of the many modes of transportation, whatever was the most appropriate for the situation. 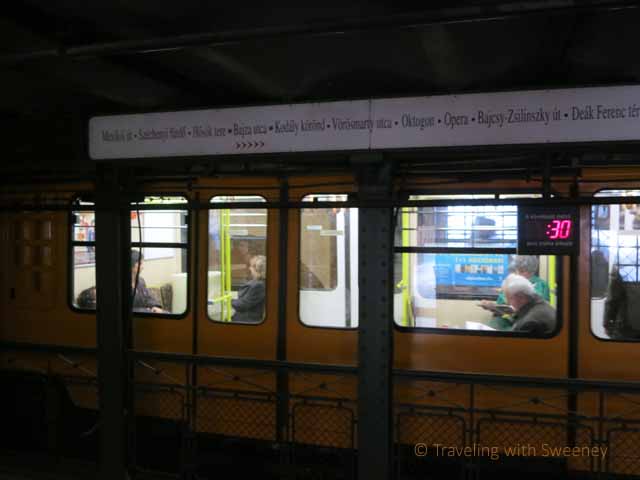 The Metro is the second oldest electricity powered underground railway in the world. It was inaugurated by Franz Joseph I, emperor of the Austro-Hungarian Empire, in 1896 as part of the millennial celebration of Hungary, commemorating the first Magyar settlement. Despite its age, we found the Metro to be reliable and comfortable and the facilities to be well-maintained. The trains and stations each have their own distinct character and edgy kind of beauty. 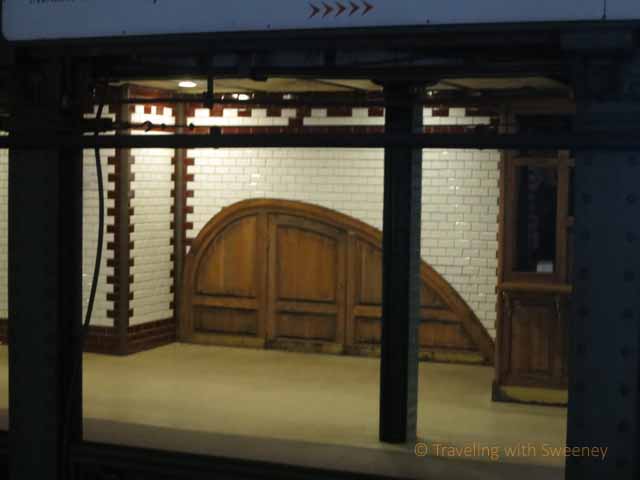 There was something fascinating about this little nook, fancy woodwork and odd door. We don’t know the answer, but this is an interesting question: Is it art or is it functional?

There were colorful murals and posters in almost every stop and station. 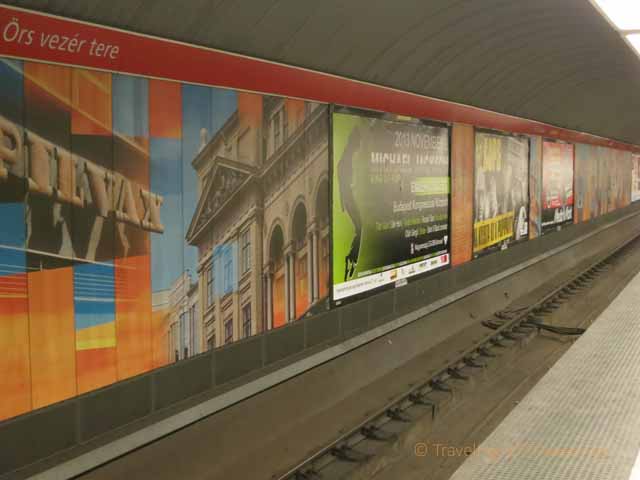 The train cars, even on some of the oldest lines, were clean and comfortable. 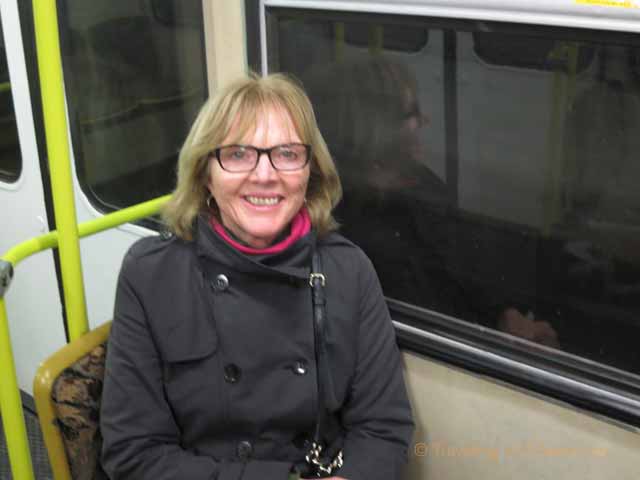 I was a happy metro rider, although this was our last metro ride in Budapest before we had to leave early the next morning. I’m always a little sad when a trip comes to an end. 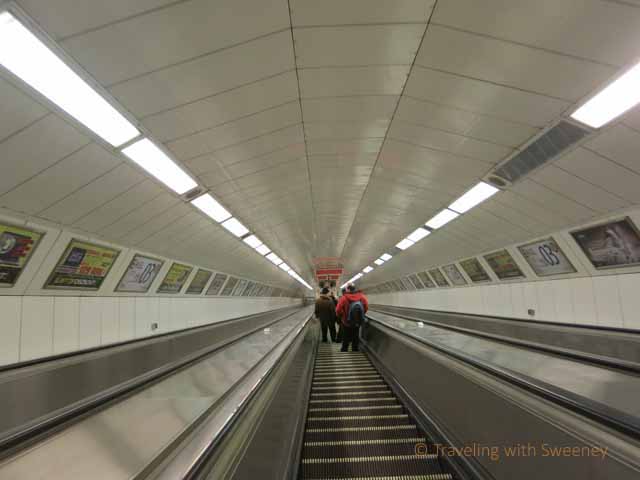 Getting to the train platforms was sometimes part of the experience. I was surprised the first time I went to get on an older escalator and realized that it was moving much more quickly than escalators I’ve experienced and some old ones were actually made of wood. This one was quite steep, but maybe not quite as steep or long as some other I’ve seen, especially in Washington DC, for example. Although I’m pretty serious about watching my step on escalators, especially fast ones, Mr. TWS actually got me to look back for this picture. 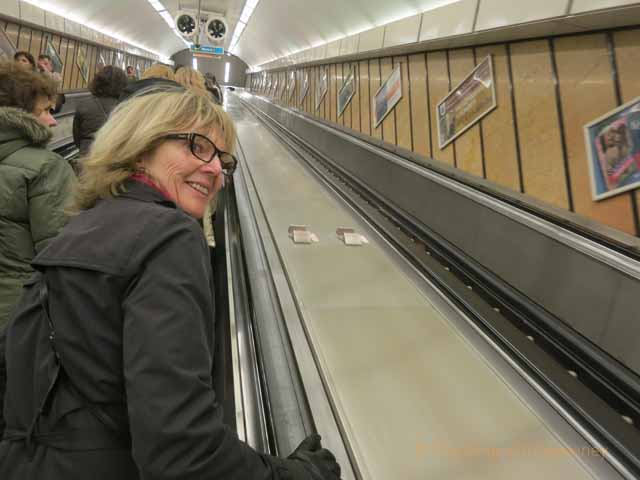 Riding the escalator at Metro station

It’s also interesting to note that the original Line 1 was named a World Heritage Site in 2002. 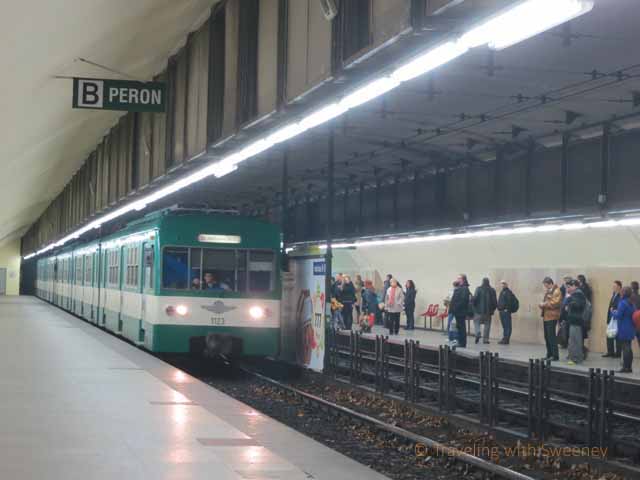 We also took the Suburban Railway (HEV) which connects to the Metro at several spots. We took it along the river north of Margaret Bridge on the Buda side of the city.

The tram system was also quite extensive, easy to use and frequent. I liked the look of the yellow cars. 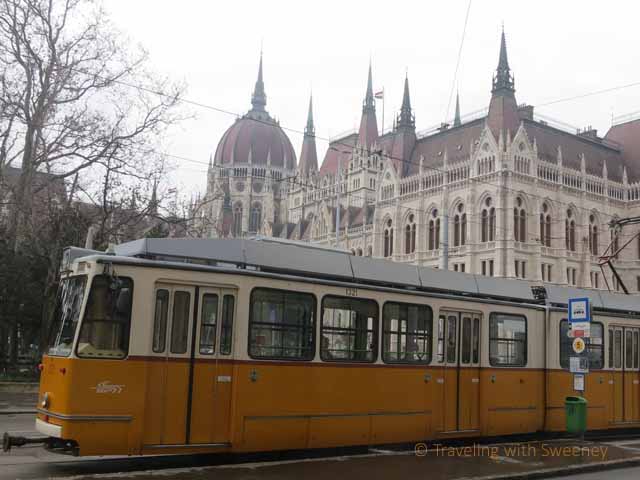 Tram with Parliament building in the background

This photo captures two iconic sights in Budapest — the street car and the Hungarian Parliament building. 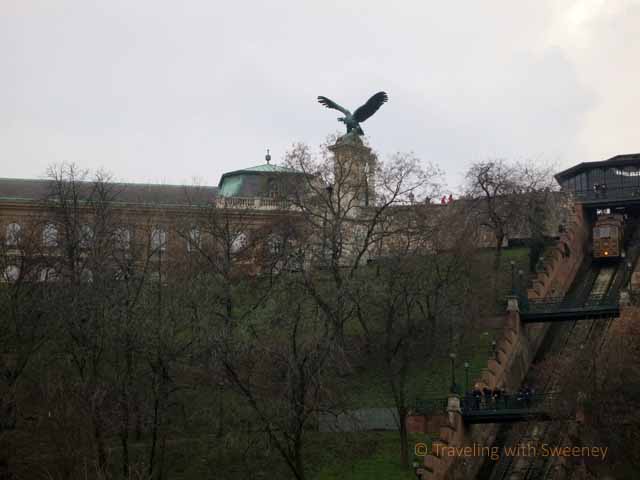 We rode the funicular several times;  it was an easy way up Castle Hill from just across the Chain Bridge on the Buda side of the Danube. In addition to the beautiful views, it provided access to the Buda Castle, Matthias Church and the Fisherman’s Bastion. I enjoy riding funiculars and cog railways in many places I travel — they’re usually short rides and there’s almost always a stunning view at the top, just as here in Budapest.

Watch this video of one of the trips we took on the ride down from Buda Castle accompanied by the music of Harvey79’s “Budapest”. (If you’re reading this in our newsletter, you’ll need to read the post on the website to see the video.)

The Danube is such an important part of Budapest’s beauty with many key sites visible along the banks. We found that taking a nighttime one hour tour boat trip was a fun way to get some unique views. It’s one of those touristy guilty pleasures I enjoy. Included in the fare was one (not very good) glass of wine, but there were million dollar sights along the way. I also have to admit that I started to doze off about half way through the ride. There’s something about boats even in beautiful places that makes me a little sleepy. (I also had an experience of sleeping on the Seine.) 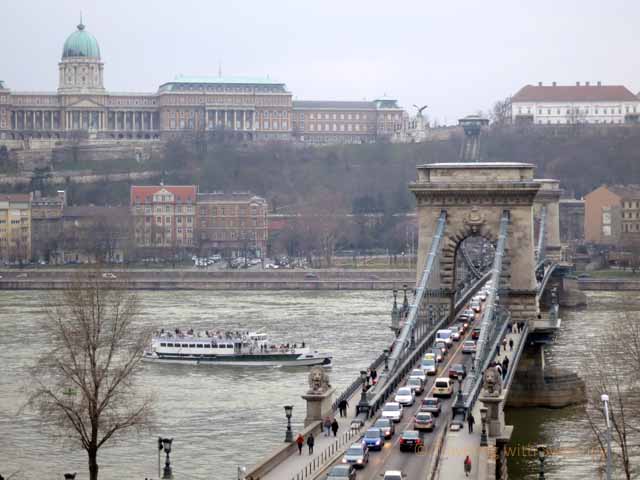 Tour boat on the Danube River

A tour boat was about to pass under the Chain Bridge when we took this photo from our room at the Four Seasons Gresham Palace.

We took taxis to and from the airport and to a restaurant on our first night by direction of our concierge. We did read a number of warnings about taxi fare problems, but didn’t encounter those because of the few controlled rides we took. However, we didn’t take this little taxi that we spotted near Parliament. I’m not sure that Mr. TWS and I would have been able to fit together. 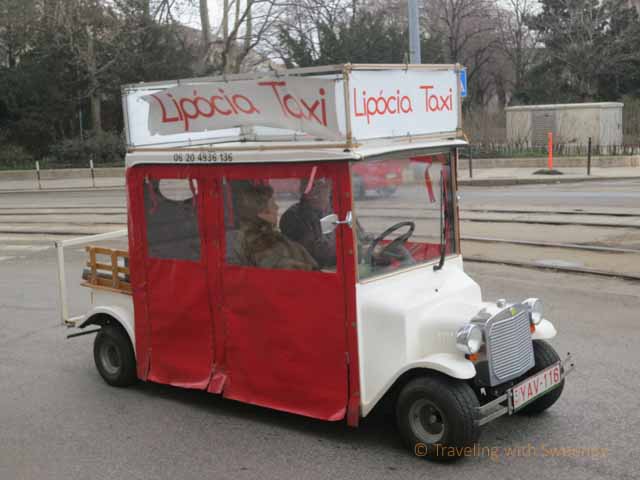 We saw a few bicyclists in the city, but it seemed a less common mode of transportation than in Berlin, for example. We saw this guy rollerblading across the beautiful Liberty Bridge. 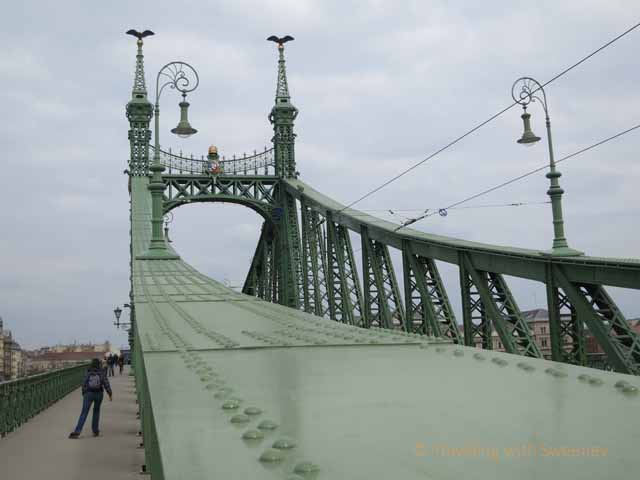 We didn’t ride scooters (or get any food delivery). 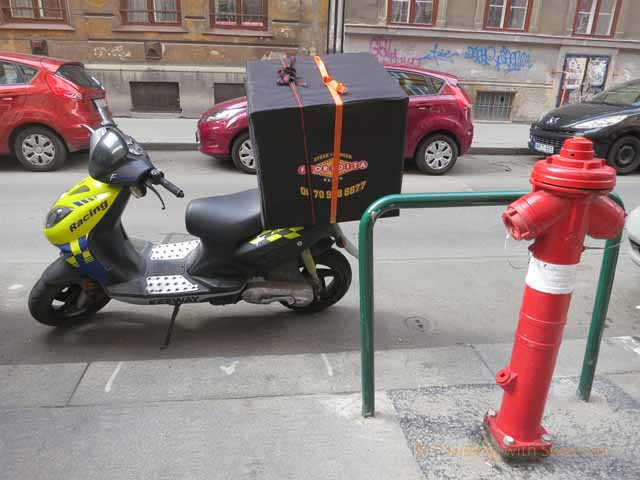 We didn’t drive any cars in Budapest. I like this photo because of the everyday life scene, the old building and the colorful signs in Hungarian. The car adds a nice touch. 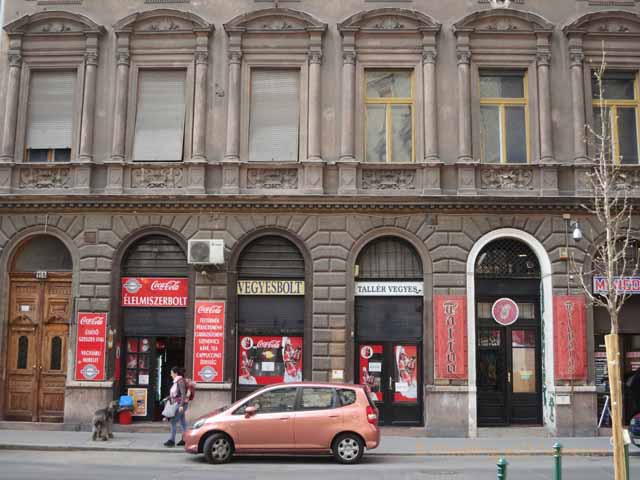 Of course, walking is our favorite mode of transportation in cities, whether it’s sunny, at night, or in a light rain as pictured below on the Chain Bridge. 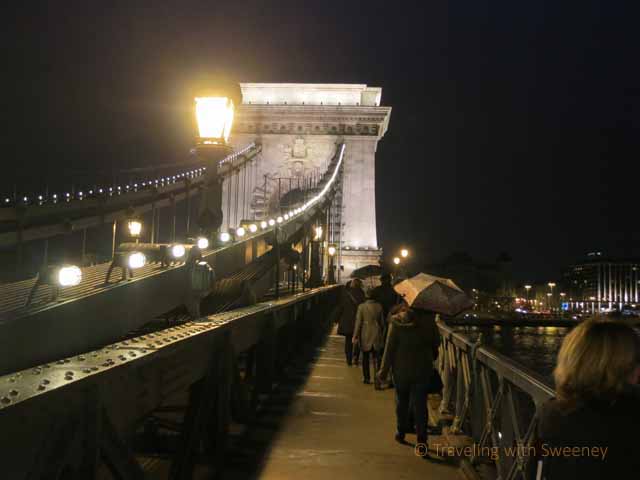 Walking across the Chain Bridge in the rain

It was nice to see this couple on a stroll along one of the narrow streets of romantic Budapest. 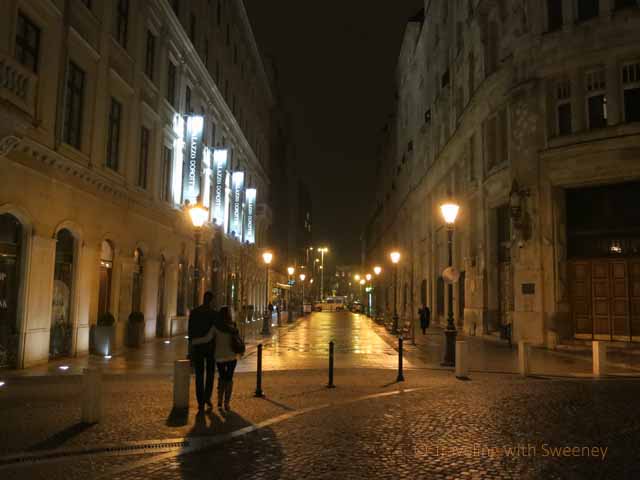 What modes of transportation do you use for getting around cities?

40 thoughts on “Getting Around Budapest”