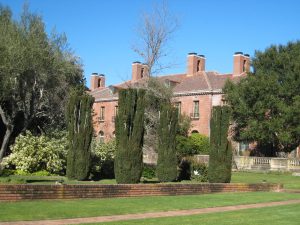 “Fight for a just cause. Love your fellow man. Live a good life.” Taking the first two letters of each part of his motto, William Bourn named his lavish country estate Filoli. Bourn indeed lived a very good life in this 36,000 sq ft mansion with its 43 rooms and 17 fireplaces. The estate was built with his gold mining money in 1917, sold to shipping magnate, William Roth, in 1937 and is now maintained by The National Trust for Historic Preservation. 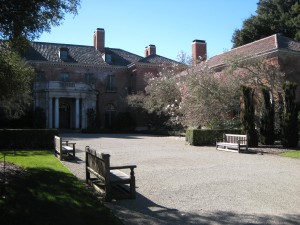 Filoli House and Gardens is located about 25 miles south of San Francisco and really “just down the road” from my house on the peninsula between the San Francisco Bay and the Pacific Ocean. Although it’s a popular attraction for locals and tourists, and only a ten minute drive away, I visited this week for the first time. 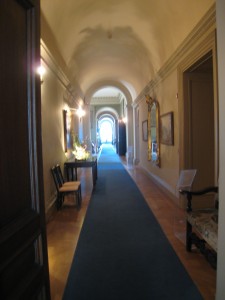 While you may not have heard of Filoli before, you may have seen it in films and on television. Warren Beatty’s Heaven Can Wait was filmed there in 1977 and spurred future filmmakers to consider it as a location. Dying Young, The Joy Luck Club, The Game, Stigmata and The Wedding Planner are a few of them. Notably, it is the mansion seen from the air during opening credits of Dynasty, a 1980s television series. I first saw Filoli as a film set in the controversial 1997 remake of Lolita with Jeremy Irons. 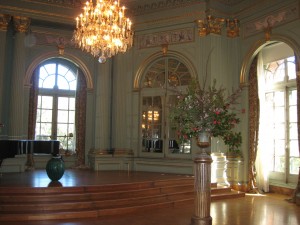 Although the second floor of the house is closed to visitors, the downstairs reception room, kitchen, drawing room, ballroom and other living areas are open. The ballroom was used by the Bourns and Roths for their elaborate parties, one of which was aptly called “The Drunks Dinner” and was held to celebrate the end of prohibition in 1933. I was told by one of the many helpful docents that flowers from the garden decorate the house throughout and are changed early every Tuesday morning. With many pieces of furniture and art donated by the Roths and other 18th-century English furnishings contributed by a collector, the house looks much like it did when the families lived there. 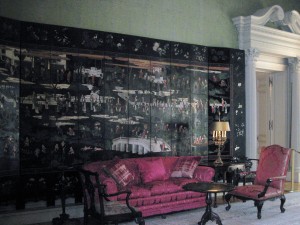 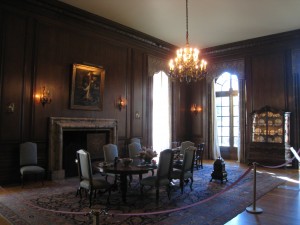 As important to Bourn as the house was the design of the formal gardens and orchards which cover much of the 645 acre estate. He chose this particular location because with its setting near Crystal Springs Lake and with a vista of the Santa Cruz Mountains, it reminded him of Muckross House in Ireland, the estate that he bought for his daughter as a wedding gift. 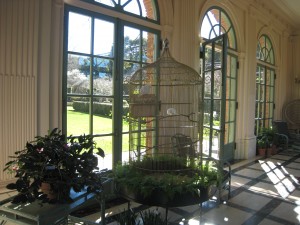 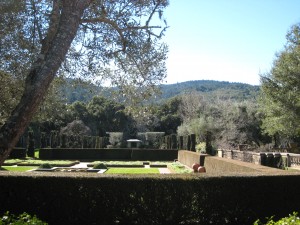 I started a tour of the grounds at the Garden House where a birdcage with two doves was on display. Other buildings on the property include the Garden Shop (which was previously a garage and carriage house), a retail nursery, and gardener’s cottage. Because it was February, only a few of the many varieties of flowers and trees were in bloom, yet it was still very impressive. In the spring and summer seasons, Filoli will be spectacular when the 242 varieties of roses and many fruit trees are in bloom. 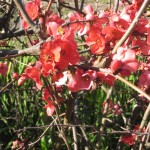 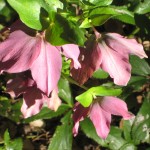 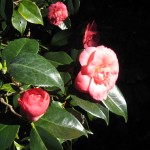 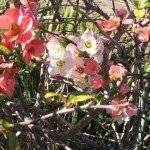 At the far south end of the estate called the High Place, I got a very good view of the gardens, the house beyond and the green hills in the distance. I was just minutes from a major highway, Interstate 280, and a heavily populated area of Northern California; yet, as the clock tower bell tolled and birds sang, I could easily imagine being at Filoli during its golden years. 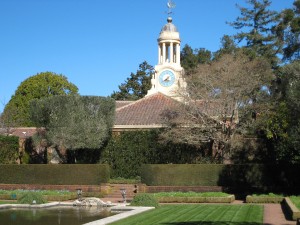 For more information and directions, visit the Filoli website.

I had lunch at the café at Filoli which has a good selection of sandwiches, quiche, soup, salads and desserts, but there are other options in the rustic, but affluent town of Woodside, just 5 miles south. Stay on Cañada Road from Filoli and you’ll be driving alongside bicyclists and occasionally passing a horse on the path next to the road. In the town, a sculpture of two horses fits the equestrian lifestyle of many of the town’s residents. Woodside Bakery and Buck’s Restaurant are favorites among Silicon Valley entrepreneurs, venture capitalists and locals. 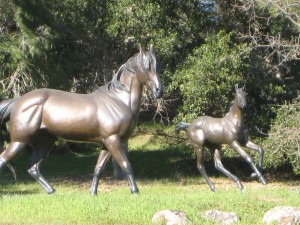 35 thoughts on “Glimpses of a Golden Age at Filoli”