Lush greenery and countless bodies of water dominated the serene view I saw as my flight descended into Halifax Stanfield International Airport, providing evident contrasts to the dryness of my drought-ridden state of California and the bustle of making a connection in Detroit. I was excited about my upcoming road trip through part of Nova Scotia, but first would be a day in this Maritime province’s capital city of Halifax — a return to a place I had only briefly visited during a family road trip as a teenager.

Crossing the Angus L. Macdonald Bridge into Halifax from Dartmouth

During my short time in Halifax before and after the road trip, I got a glimpse of the city’s history, culture, beauty, art and food … and déjà vu. Join me on a quick photo tour of my Halifax highlights. 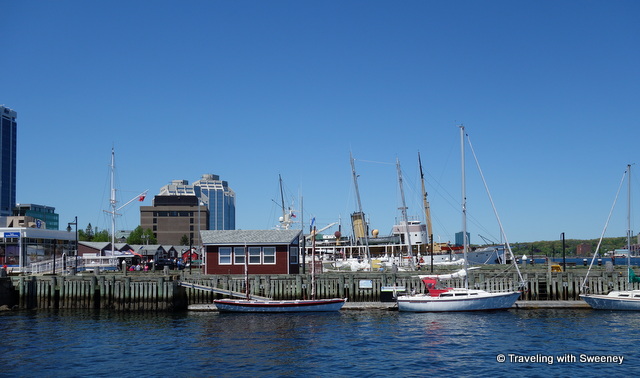 Along the Halifax waterfront on the Harbourwalk

On this warm and sunny Sunday both residents and tourists were taking advantage of the beautiful day to spend time at the waterfront. The Halifax Harbourwalk is the longest downtown boardwalk in the world and has many shops and restaurants. It’s also a great place to enjoy views of boats on the harbour or absorb some history. 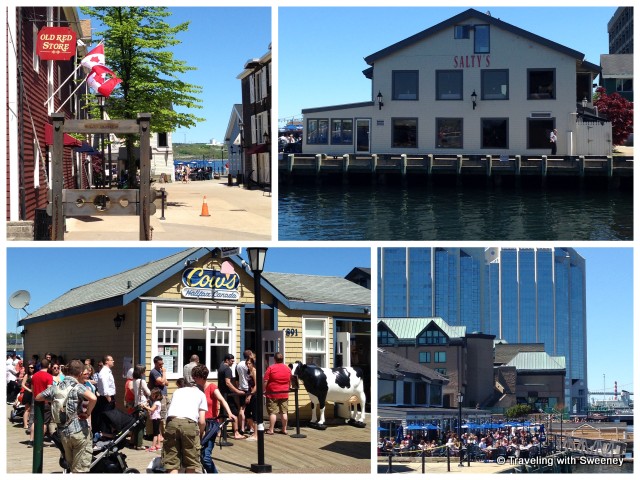 Shops and restaurants along the boardwalk on the Halifax waterfront

Cow’s Ice Cream, headquartered in Prince Edward Island, was rated by Reader’s Digest as having the best ice cream in Canada. I didn’t get to try it, but I talked to people in the long line (shown above) at the new store on the Halifax Harbourwalk and they agreed!

Historic Properties is a group of stone and wooden warehouses on the waterfront built between 1800-1875 that are now offices, shops and restaurants. The Old Red Store is located in one of the old buildings here with a heritage designation.

On the southern end of the Harbourwalk is historic Pier 21, a former ocean liner terminal that welcomed hundreds of thousands of immigrants from 1928 to 1971. Now the site of the Canadian National Immigration Museum and a place of significant importance for immigrants to Canada, it was the venue for an opening night reception for our upcoming road trip. Our group got to see some of the exhibits and experience how so many immigrants must have felt arriving at this place over the years. 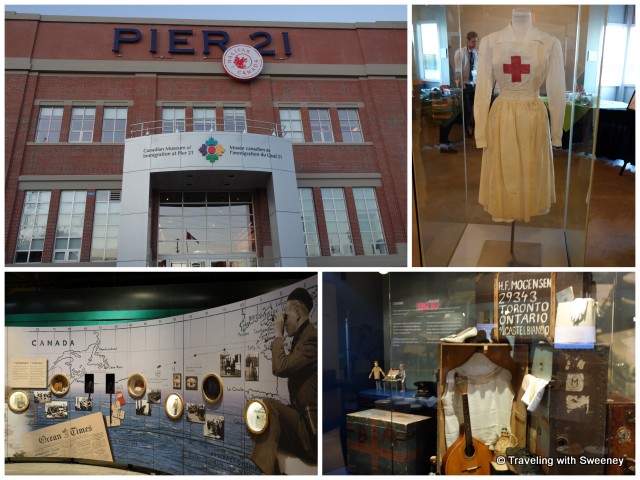 “Peace – The Exhibition” is currently featured at the museum and will run through October 19, 2014. It focuses on how peace, violence and war have been key factors in Canada’s history of immigration. Viewpoints include those of “peace activists demonstrating to prevent war, soldiers fighting to end war, and immigrants coming to Canada to escape war”. I was particularly interested in this as a person who was growing up in the United States during the Vietnam War and hearing about the “draft dodgers” who were fleeing to Canada. 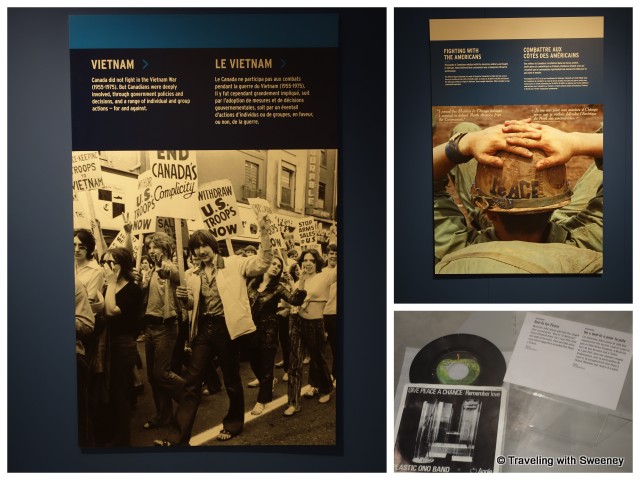 Peace – The Exhibition at Canadian Museum of Immigration

A pub, an inn, the blues and more on Barrington Street

Walking along Barrington Street, a major street in downtown Halifax, I came across a number of interesting places such as those in the photos below.  Henry House (on the right, below) was built using ironstone and granite in 1834 and was the home of William Alexander Henry who later became one of the Fathers of Canadian Confederation. It’s now a popular restaurant and pub. Waverley Inn has been a Halifax landmark since 1876. The much newer Bearly’s, a live blues bar since 1987, has an eye-catching mural that grabbed my attention. Government House, the official residence of the Lieutenant Governor of Nova Scotia, is also located on Barrington Street and there were quite a few people lining up for a tour as I walked by.

Farther along on Barrington Street at Spring Garden Road is the Old Burying Ground, registered as a National Historic Site and Provincial Heritage Property. There are only about 1,200 headstones remaining of the 12,000 people who are buried there. The oldest cemetery in Halifax, its first grave was dug on June 22, 1749, one day after English settlers arrived in Halifax. 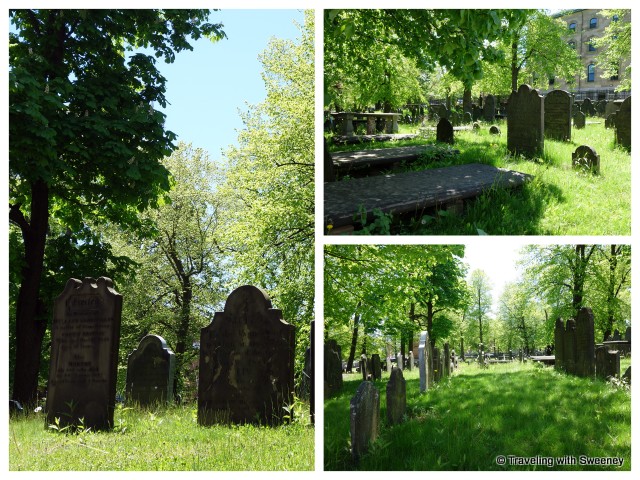 I spotted a diverse group of statues and memorials throughout my walking tour. As an admirer of Winston Churchill, I had to take the photo of this statue in front of the Halifax Public Library on Spring Garden Road honoring him. The ten-feet-high bronze statue was sculpted by Oscar Nemon and represents Churchill as seen in a photograph taken while he was strolling down Spring Garden Road on the first of two trips to Halifax during World War II. 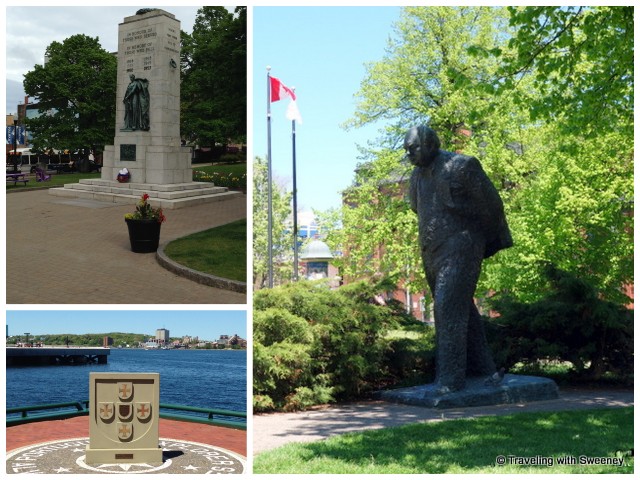 A memorial I came across on the Harbourwalk honors Joao Alvares Fagundes, a Portuguese explorer who landed in Nova Scotia about 1520 and established the first colony of Europeans. This memorial was the result of the efforts of a Portuguese-American, Edmund Dinis, who wanted to shed some light on this little-known part of history. It surprised me to learn of the significant influence of the Portuguese in Nova Scotia history.

The Halifax War Memorial in the Grand Parade Square honors those who had died in World War I, World War II, and the Korean War.

Atop a hill overlooking all of downtown Halifax and the harbor stands the Halifax Citadel. It’s easy to see why this location was chosen to fortify the town of Halifax when it was founded in 1749.  I didn’t have time to take a tour inside (where visitors can even to get to dress as and play at being a soldier), but I enjoyed the panoramic views from the hill. On the grounds below the fortress, is the iconic Old Town Clock that has been keeping time since 1803 (below, left). In the distance in the top right photo is the Angus L. Macdonald Bridge which I crossed coming into Halifax the night before. 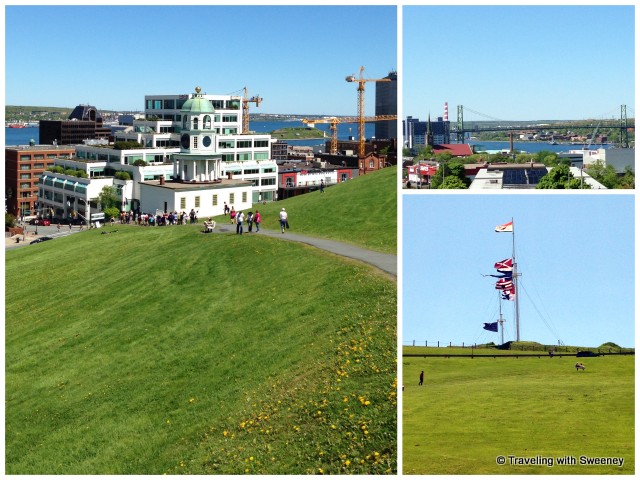 Now back in Halifax after the road trip, I enjoyed a fantastic dinner at the Five Fishermen Restaurant and Grill on Argyle Street. Here’s just a taste of that dining experience. 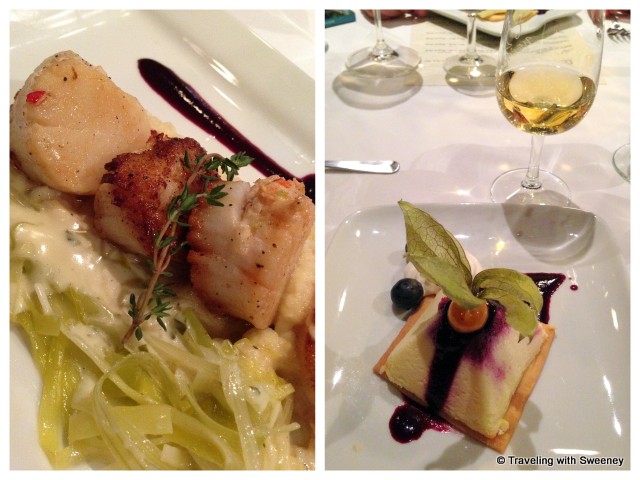 The dishes you see in the photo were delicious. The first course was a perfectly prepared Blueberry Pan Seared Halibut that I sadly neglected to photograph. But let me share the ingredients: Fennel and Annapolis Valley apple slaw, tarragon honey vinaigrette, Nova Scotia blueberry syrup and parsnip curls. It was served with a 2008 Prestige Brut from L’Acadie Vineyards. Can you picture that? Can you almost taste it?

I’ve became very fond of Nova Scotia scallops and thoroughly enjoyed the Lobster Stuffed Digby Scallops in the photo above described as “Seared Digby Scallops stuffed with lobster, served with potato parsnip puree, braised leeks, tarragon cream and blueberry.” It was served with a 2011 L’Acadie Blanc from Luckett Vineyards.

I was quite full by dessert time, but I was glad not to pass up the Blueberry Lime Cheesecake served with a 2012 Vidal Ice Wine from Domaine de Grand Pré.

But it’s not just about food at the Five Fishermen. There’s interesting history here as well. The building was originally a schoolhouse when it was built in 1817, later becoming the John Snow & Co. Funeral Home. When the RMS Titanic sunk off the coast of Newfoundland in 1912, rescuers were dispatched from Halifax and wealthy victims like John Jacob Astor were brought to this mortuary. In 1917, the mortuary was used during the devastating Halifax Explosion. The Five Fishermen opened as a restaurant in 1975 and it appears to be haunted! I didn’t personally experience any ghosts, but there are plenty of staff who have reported sightings and odd occurrences. 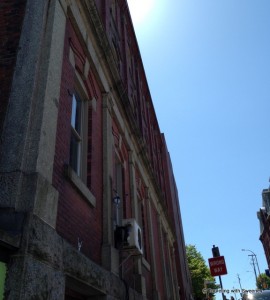 “Listen, my children, and you shall hear
Of the midnight ride of Paul Revere …”

I stopped in my tracks as I was making my way from the Citadel toward the harbor and back to the Westin Hotel. Just across the street on the corner of Sackville Street and Market Street was an old 3-storied building that took me back in time to my visit as a teenager. I remembered being in that same spot on my first visit years ago when a young woman leaned out of a top floor window and began reciting the famous poem by Henry Wadsworth Longfellow – Paul Revere’s Ride.

For some reason, that moment in time has stayed in my mind, and I sometimes wondered who she was, the significance of the poem to her, and what prompted her to recite it loudly to passersby. It seemed a little eerie at the time.

Now, knowing Longfellow’s deep association with Nova Scotia as evidenced in his poems about Evangeline and the deportation of Acadians from Nova Scotia in the 18th century, I suppose that it’s not so far-fetched. But not only did I get a strong sense of déjà vu, I was vividly reminded that the years had passed quickly between that first Nova Scotia road trip and the one I was about to take. Savor every journey!

This introduction to my Nova Scotia trip just scratched the surface of what Halifax offers as a destination. I hope to have more time to spend in the future and wonder if there will be more déjà vu experiences.

Stay tuned for my Nova Scotia Joy Ride of 2014.

Thanks to Nova Scotia Tourism Agency for making my Halifax highlights experience possible.

For more information and interesting facts:

50 Things You Don’t Know About Halifax