The small town of Hana on Maui’s northeast coast exudes serenity. Walking its few streets along Hana Bay you get a sense of old Hawaii, peaceful and distinctly different from the bustling Maui resorts on the other side of the island. Hana also embraces the culture of traditional Hawaii and we got to experience Hawaiian culture both on display and in action. 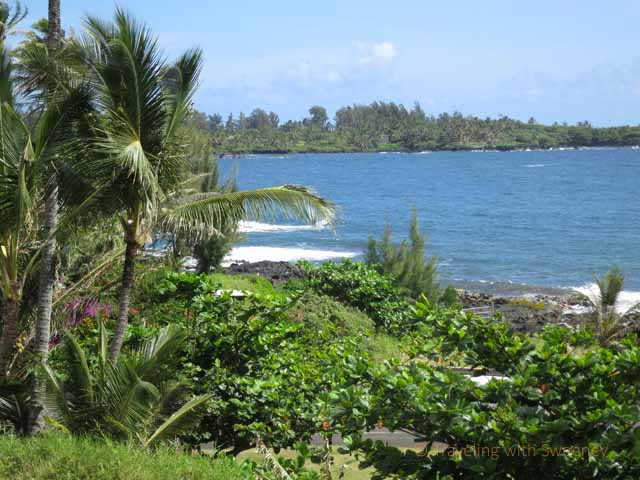 Just a short, pleasant walk from our Travaasa Hana accommodations was the Hana Cultural Center which is comprised of a small museum and a historic one-room courthouse (built in 1871) exhibiting artifacts, though it is also still used as a court. The center, also called Hale Wai Wai (Hawaiian for House of Treasures), was established in 1971 to preserve and demonstrate traditional Hana life and the culture of east Maui. 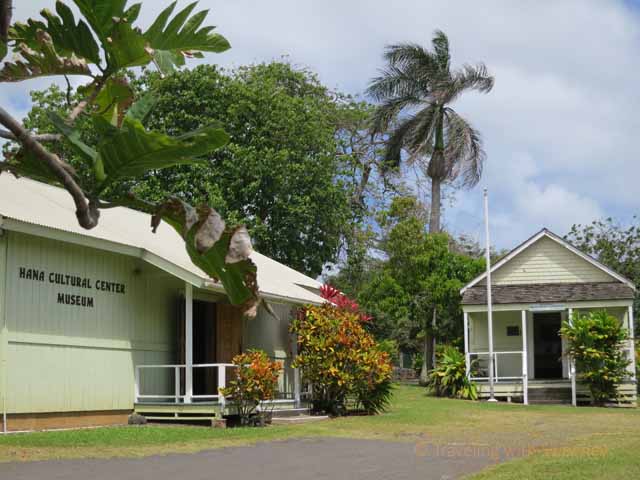 Its exhibits are simple, but rich in the history of the town and the symbolism of Hana culture. The importance of community is an important aspect of Hana culture. It is inherent in daily life and evidenced in the museum by the poster-sized photos of Hana residents, past and present.

The beautiful orange feathers pictured above caught our attention, but we were stymied for a reasonable guess as to what it was. The friendly volunteer informed us that it was a tall staff carried by a herald walking before the king’s procession because if anyone’s shadow fell upon the king, it meant a death sentence. These were life-saving warnings to alert people of royalty approaching. 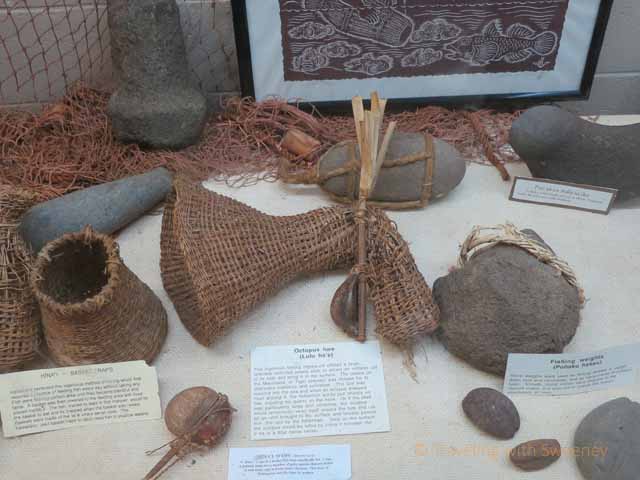 The center provided numerous displays, such as the one pictured above featuring some basic tools of early Hawaiian fishermen such as basket traps, octopus lures and fishing weights. 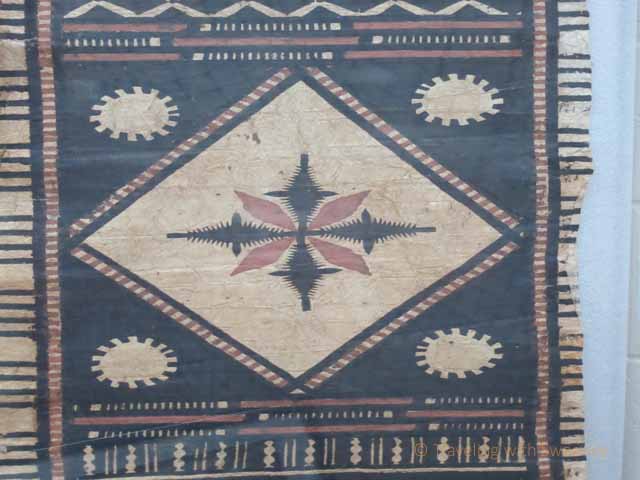 We learned about the devastating tsunami that hit shore at about 2 a.m. on April 1, 1946, killing 14 Hana residents. A 7.4 earthquake in Alaska generated massive waves that moved at 500 mph toward Hawaii. The date was an issue because some people discounted the warnings, thinking they were April Fools’ pranks. The center has newspaper accounts of the disaster as well as the stories passed along by witnesses and their descendants. 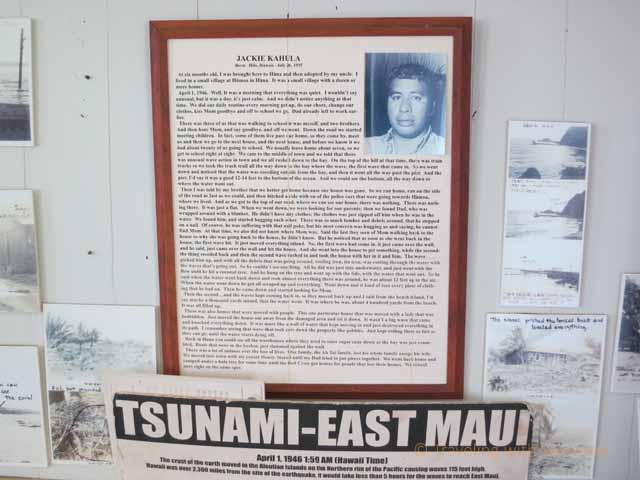 News clippings and information about the 1946 tsunami 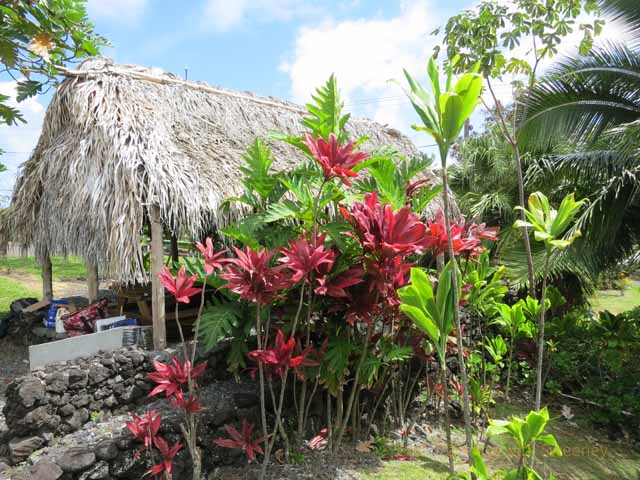 Living compounds consisted of several hales used for specific purposes, such as a hale noa (sleeping quarters for the whole family) shown below, hale wa’a (canoe house), hale mua (men’s meeting quarters), hale kuke (a general cook house) and the hale imu (the men’s cooking house for cooking foods forbidden to women). The structures were built with open ends to allow strong breezes to blow through without knocking them down. 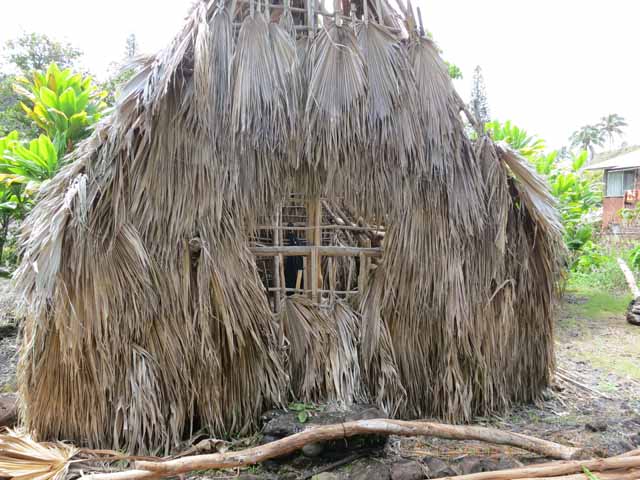 There were five teams at five different locations who had three days to complete their hale building in a competition sponsored by a benefactor seeking to promote and preserve this important part of Hawaiian culture. The winner was to be announced at the Hana Taro Festival the following weekend, which unfortunately, we would be missing. (I haven’t been able to find anything online about the results.) 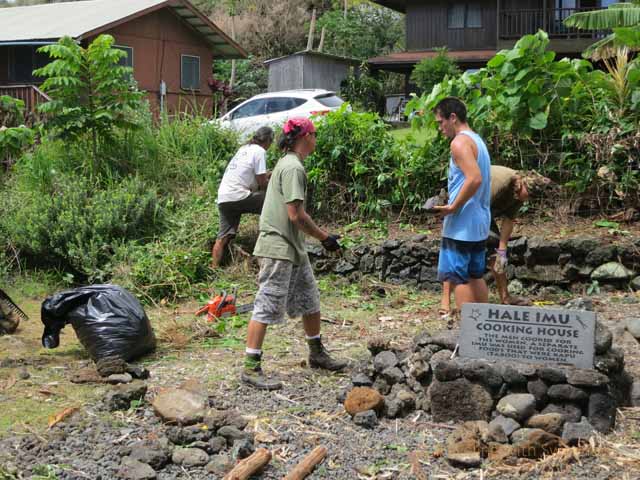 As we walked toward the work area, the team welcomed us and talked about the project. We were very impressed by the level of camaraderie and teamwork among the individuals. In fact, that was an integral part of the competition — harmony and teamwork were elements on which the teams were judged. As one of the volunteers said — they could not be working on the project with any negative feelings. 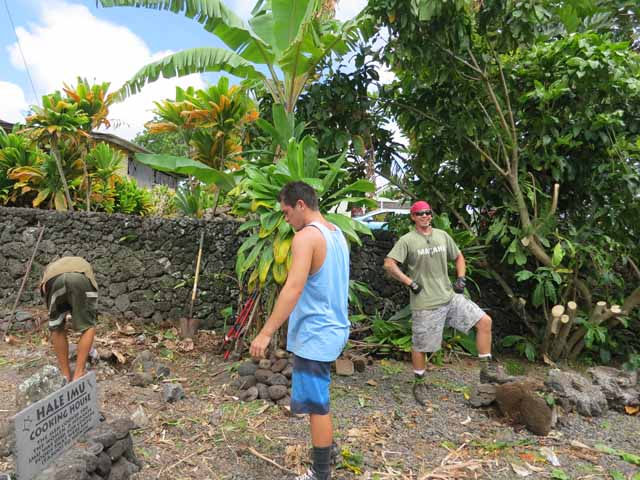 Enjoying the camaraderie of constructing the hale

The thatched roof structures were made from rocks for the platform, ironwood frames, tied together with cords  (traditionally made from plants, but now man-made materials are also acceptable) and leaves or grass (more commonly used because of the sweet smell) for the roof. 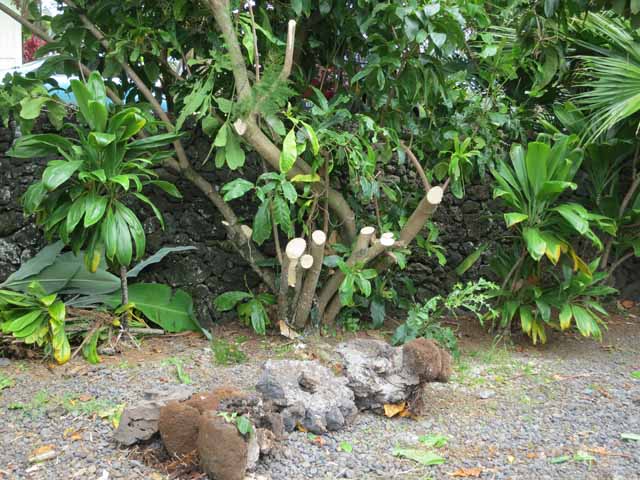 Trees cut for use in building the hale

The team was working on gathering the materials and building the platform and in-ground oven for the hale imu. They commented that it was ironic that the building nearby, the hale wa’a, had been the victim of a fire rather than the hale with an oven. 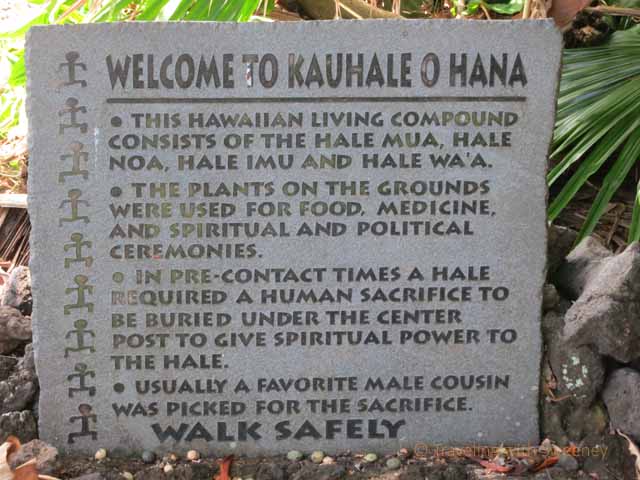 Of course, human sacrifice in ancient times is not unexpected, as mentioned on the sign at the entrance to the hale compound shown above. But I was struck by the notation that it was usually a favorite male cousin who was picked for the sacrifice. Good enough reason to avoid the relatives!

We apologized to the hale builders for interrupting their work and I said, “Sorry we didn’t think to bring you guys some cold beverages.” The foreman said, “That’s OK. You came with a smile.”

48 thoughts on “Hawaiian Culture in Hana”