Anita Breland is an avid traveler who delights in sharing her discoveries of cultural traditions around the world. She is on a never-ending quest for good food and the people who make it.

Color, Culture and Soft Adventure on a Luxury Train in India

When my husband and I visited India’s westernmost state of Maharashtra, we traveled on the Deccan Odyssey, a week-long journey filled with cultural exploration and discovery. Mumbai may be the country’s financial hub and the state capital, but Maharashtra has much more to offer. Goa and the UNESCO World Heritage sites at Ellora and Ajanta caves were especially memorable, but we also traveled to several intriguing destinations I would probably not have visited on my own. A trip on this luxury train is filled with color, culture and soft adventure.

A feast for eyes and palate

In a country known for its exuberant traditions, plenty of local color awaited us at every stop along the way. From bangles in a shop selling ONLY bangles, to temple garlands, to the celebration of Holi, there were myriad distractions for a camera buff. Musicians in traditional dress met us at every stop. Markets were bright with fresh, artfully arrayed fruits and vegetables. The cuisine, deliciously spiced, varied slightly from region to region within the state. 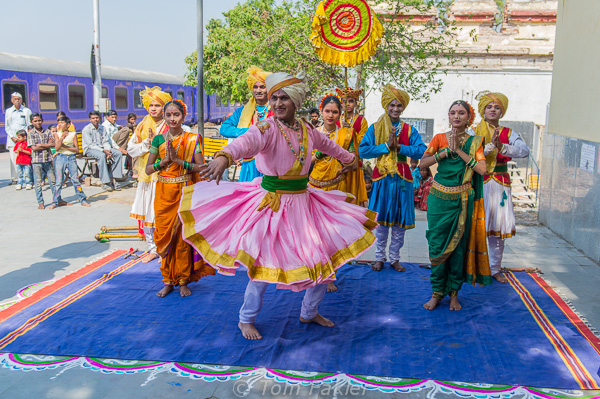 Dancers at the station in Daulatabad — Photo by Anita’s Feast

When the train pulled into Daulatabad, we were met by a troop of dancers in traditional costumes. 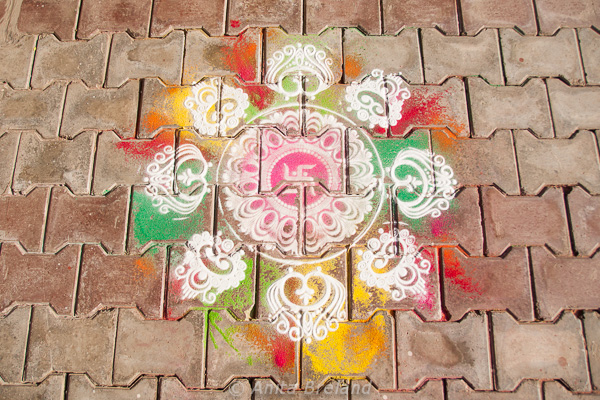 In Aurangabad, a small Indian pavement painting was at the entrance to a shop. For festivals such as Diwali, these paintings, called rangoli, are in front of just about every home. 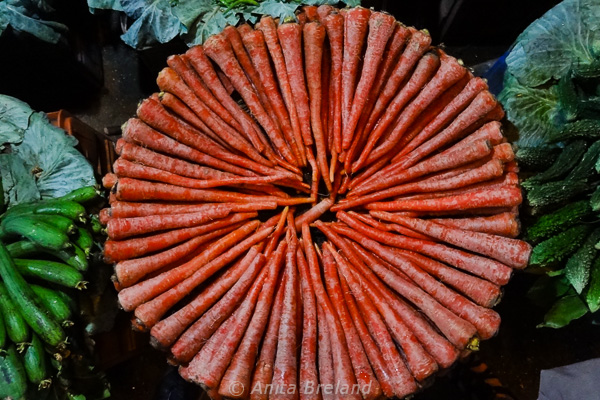 An artful display in Nashi’s night market in looked almost too good to disrupt with a sale!

Goa may be best known to many for beach life, but the vestiges of a European-dominated past are worth seeking out. Our swing through the tiny state provided a glimpse of Portugal’s legacy, and was particularly evocative during Easter week, as the faithful made their way to the Se Cathedral in Old Goa. Not far away, the ruins of the Saint Augustine church has often served as a movie set—faded blue and yellow Portuguese tiles are still visible here and there in the rubble. 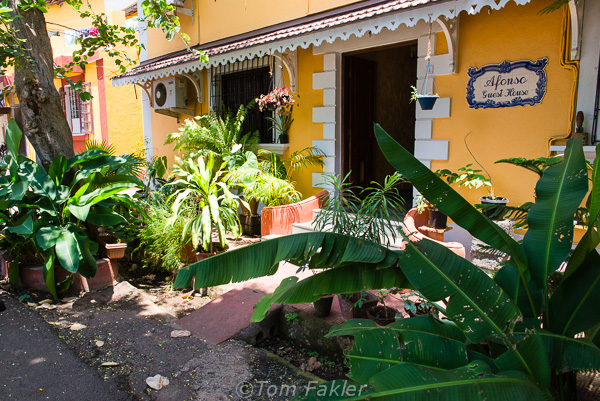 Houses in this Panjim neighborhood look as though they could have been lifted from Lisbon and given a tropical makeover. 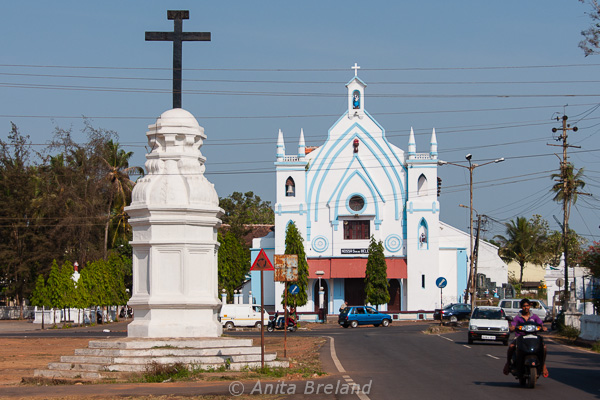 A church in Chandor reminded me of blue-trimmed buildings in Portuga’s Alentejo region.

Ellora and Ajanta caves, World Heritage for a reason

The UNESCO World Heritage Ellora and Ajanta caves, near Aurangabad, are worth a journey in themselves, and many travelers nip over to Aurangabad by air from Mumbai. Arriving by train and bus, we traveled through a landscape that seemed less peopled, less crowded than the views I associate with India. Our visits to the caves were spread over two days near the end of our trip, providing a lasting memory of these special places. 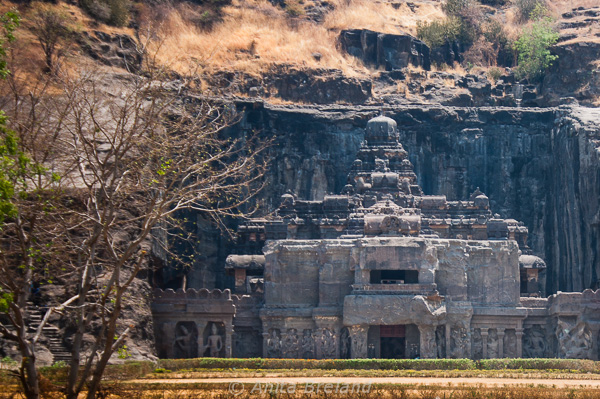 Colossal carriage of the gods — Photo by Anita’s Feast

At Ellora, we marveled at a colossal carriage of the gods, carved directly into the hillside. Carved from top to bottom and back to front, no scaffolding was used in the construction of Ellora’s sculptures and monastery caves. 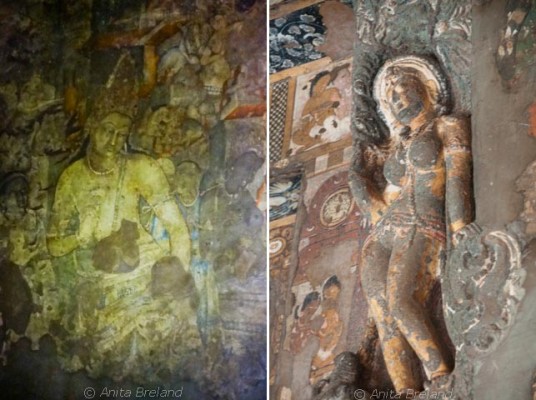 Ajanta is known for its wall paintings, its sculptures and elaborately carved and painted decorations. The Ajanta caves are older than those of Ellora, carved between 6th century BC and 6th century AD.

Off the beaten path

Before our recent trip, I had never heard of Daulatabad Fort, which for a brief period, was the capital of empire. Nor did I know the colonial capital of Kolhapur, or the pilgrimage center of Nashik. Our trip aboard the Deccan Odyssey took us within range of all three and I’m so glad to have seen these places! 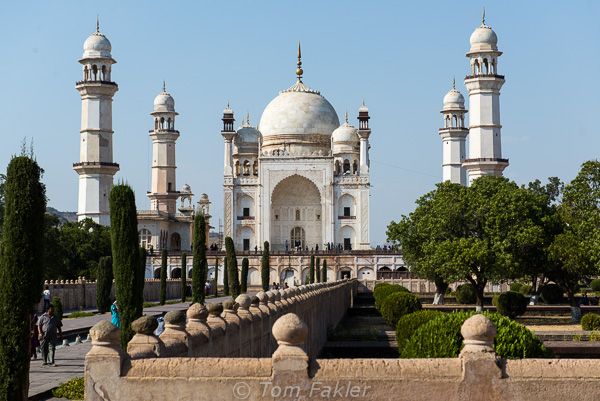 Bib-ka-Maqbar is not far from Aurangabad. Sometimes called the Taj of the Deccan, the mausoleum was commissioned by the Mughal Emperor Aurangzeb in the late 17th century. 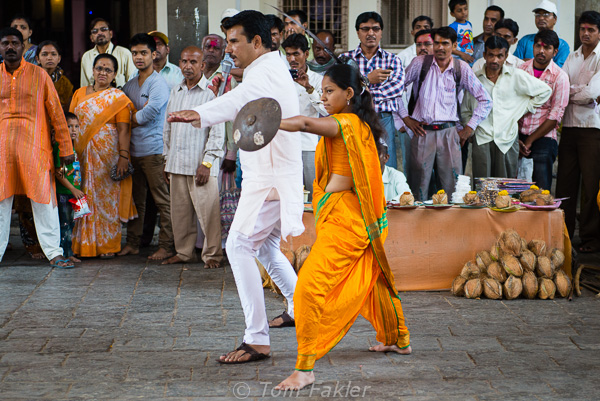 In Kolhapur, a lively demonstration of martial arts, practiced in the 17th century by the warriors of the Maratha Kingdom. 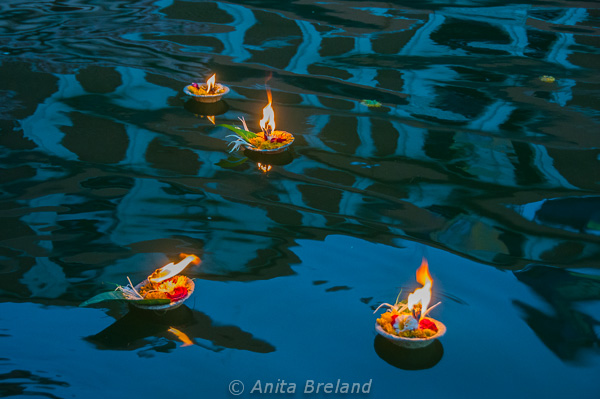 Our Indian adventure was colorful and chock-a-block with day excursions such as these. A journey through Maharashtra, travelling in style on the Deccan Odyssey offers fans of train travel a memorable way to venture into new territory.

Disclosure: Anita and her husband were guests of Maharashtra Tourism Development Corporation and India Tourism. 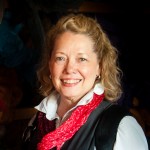