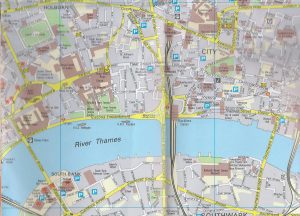 Do you have a map addiction?

I’m not a mapaholic — I can quit anytime. Really. I can file maps away and forget about them for a while. I even throw duplicate ones in the recycle bin. A real mapaholic can’t do that. They can’t throw away old, torn-up road maps or stop picking up new ones at the automobile association office, whether they’re going somewhere or not. They save the maps of tourist attractions, state parks, hiking trails and subway systems. But I sympathize. OK, I empathize, since I keep them, too.

Why I love maps

Maps not only help you plan where you are going or fantasize about places on your wish list, but they show you where you have been and give you an excuse to relive the journeys. I can look at the atlas we had when I was young and still feel the excitement of adventure; or unfold a walking tour map of London and start thinking about the next visit. 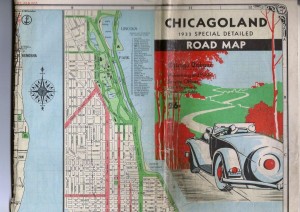 Some maps in my collection were passed on to me by my dad, also a mapaholic, and are quite old, providing a glimpse of history. These include a 1958 Touring Guide of the Pacific Coast, the 1933 Chicagoland Road Map (depicting the site of that year’s “A Century of Progress”), Longwith’s Road Map Atlas of the US and Canada (dated 1929 with an introduction that says “An ultra-modern Atlas has been built and cost ignored in making it the best”), the 1930 AAA Road Maps of the United States, and the 1893 Map of Chicago and the World’s Columbian Exposition.

How could I part with those old maps or even more contemporary ones like Michelin’s Ireland from a 2004 trip, current city maps such as those of Toronto, Chicago, Milwaukee, San Francisco (laminated Streetwise city maps are must-keeps!); state maps from Idaho, Nebraska, Nevada, and a few dozen others? What about those National Geographic insert maps? I can’t quite seem to get rid of any of these.

Some of my maps might even be worth something. But I think they are probably just worth something to me. They tell stories of the past and dreams of the future.

Get rid of them? No, can’t do it. I’m a mapaholic! Wait — maybe not, I recently tossed a NYC bicycle path map into the recycle bin. And maybe I can do without the rental car agency city and area maps. Does that help?

But if you think I’m a mapaholic, so be it. I’ll have another map, please. Straight up.

Follow along with us on Traveling with Sweeney to see where our maps are guiding us in our travels.

3 thoughts on “Mapaholics Will Get This”