If you live in or will be visiting the Phoenix Metro area, make sure to visit the Musical Instrument Museum (MIM). It’s a thoroughly enlightening musical, cultural, and geographical experience and a must-see attraction to include on any itinerary. 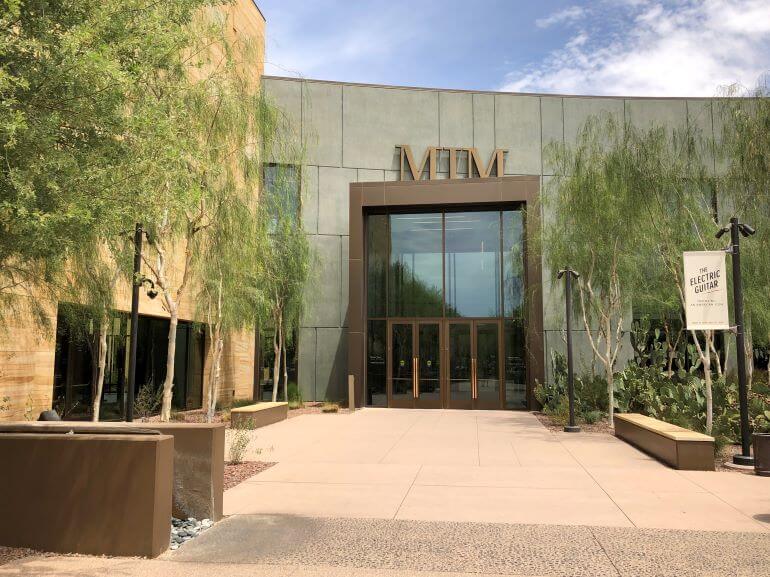 We spent about three hours at the museum and felt we were able to get a great introduction to the wide-ranging exhibits, but could well have spent several hours. I hope this post and the selected photos will give you an idea of the wide range of displays at the museum.

Showcasing the big, wonderful world of music and culture 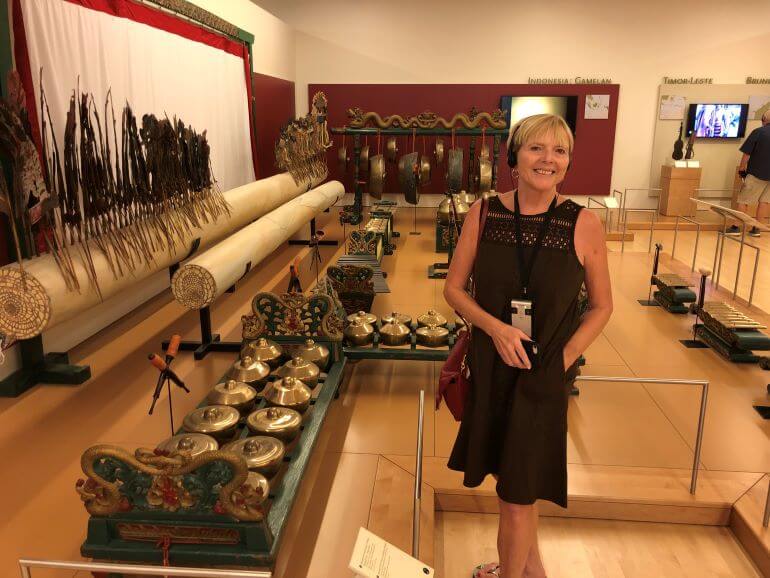 Opened in 2010, MIM allows visitors to take a virtual journey around the world with its extensive exhibits of musical instruments and cultural perspectives. As you move around the galleries, wireless headphones tune in automatically to the audio of videos of the instruments being played in cultural context at performances, rituals, and festivals of cultures around the world.

The museum’s collection includes over 13,600 instruments and artifacts, both ancient and contemporary, from more than 200 countries and territories. About 6,800 are on exhibit at any given time. The oldest instrument is a paigu goblet drum from China that is said to have been made between 5000 and 4000 BCE.

It was in these global geographic galleries that we spent the most time. From one exhibit to the other, it was like taking an immersive journey to other worlds.  The instruments are fascinating artifacts to view, and the accompanying large-scale photographs, original costumes, related art, and cultural performance videos really make the experience. I thought it was interesting to find the commonalities of some instruments across cultures as well as those that that are unique to a people or place in composition, sound, and significance. 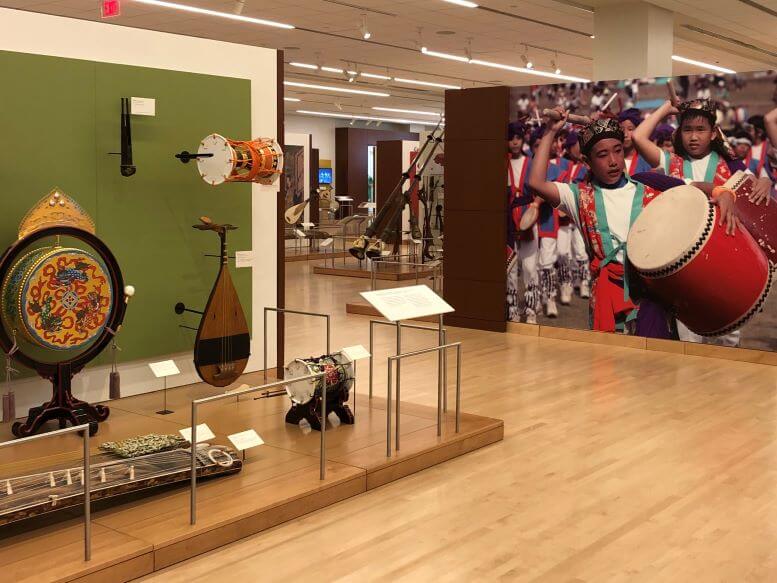 Inside the Asia Gallery 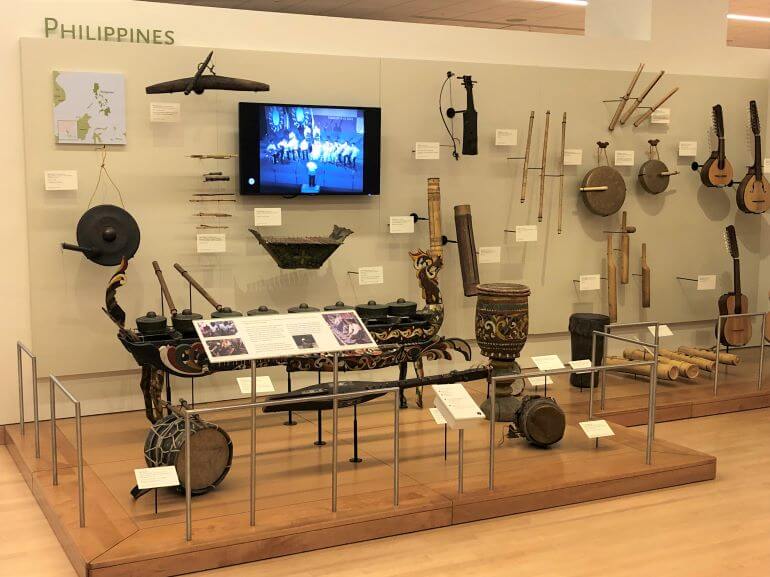 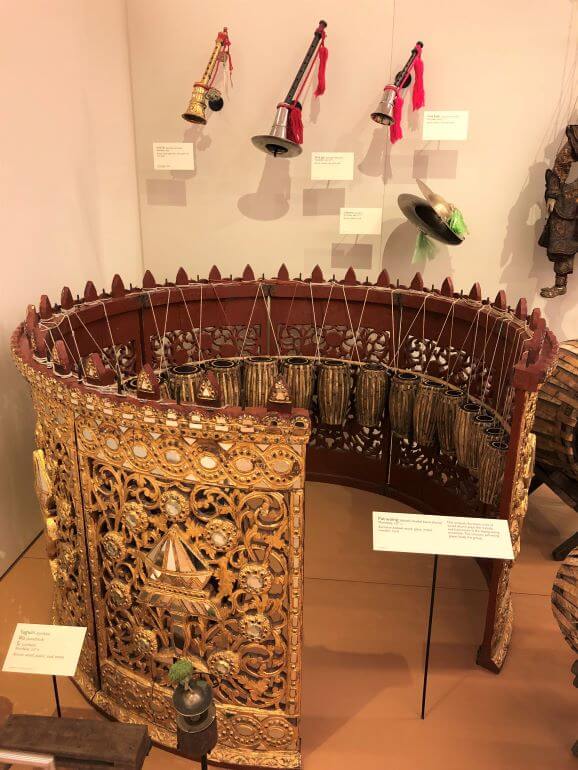 The pat waing, a traditional Burmese circle of drums 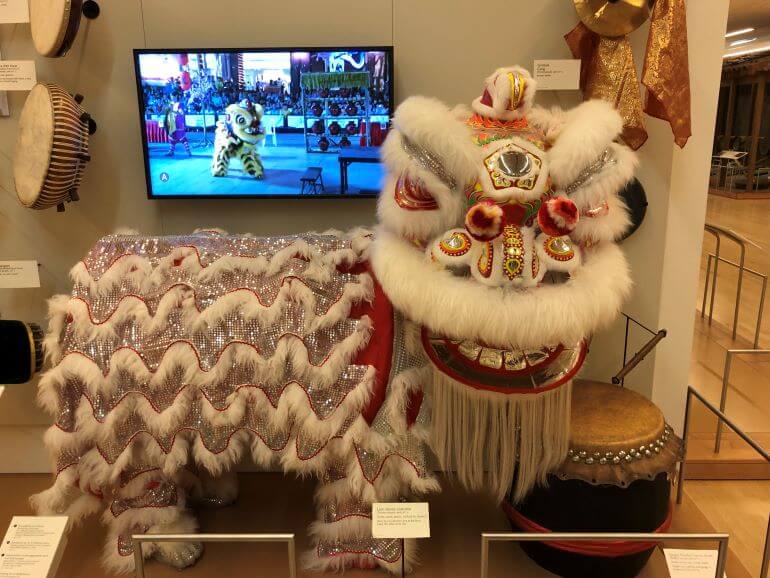 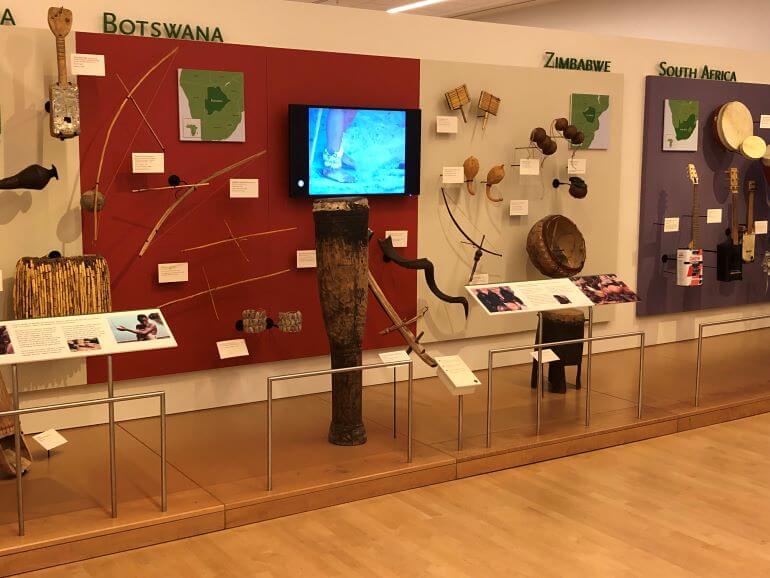 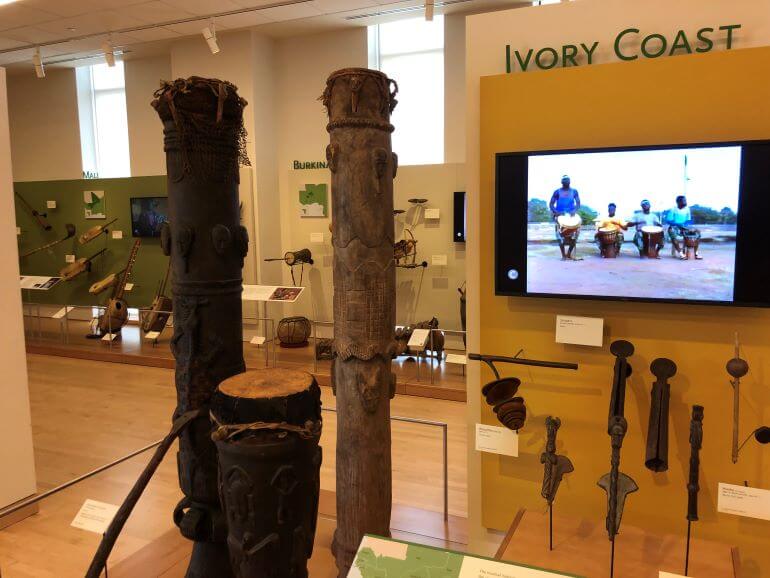 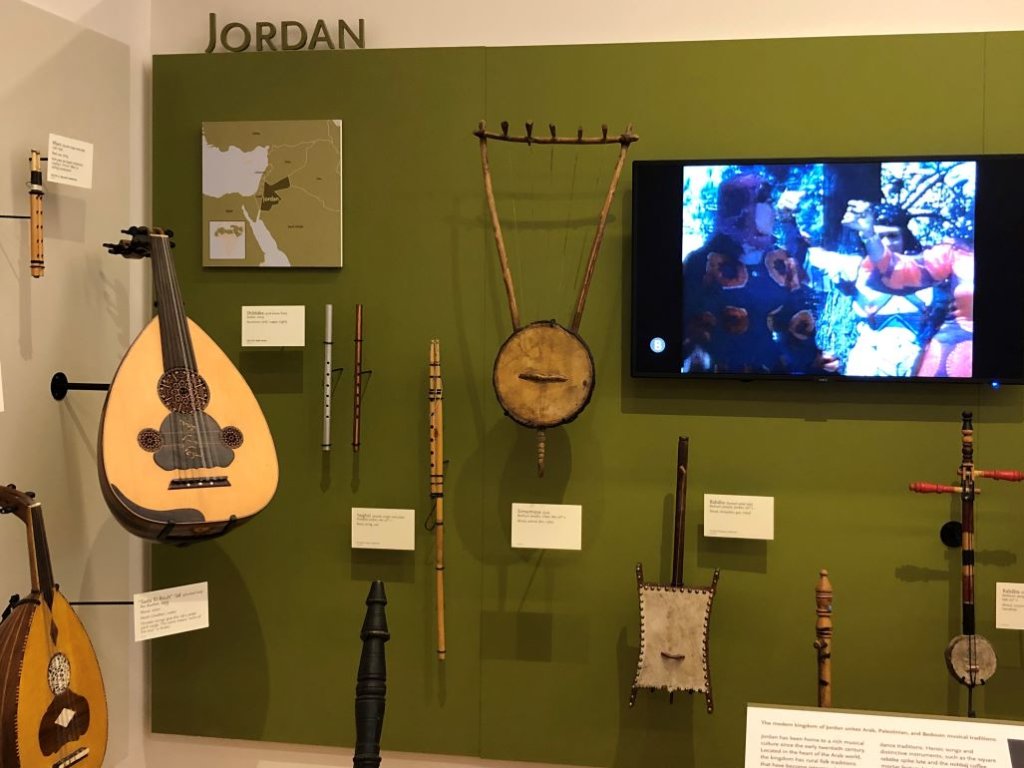 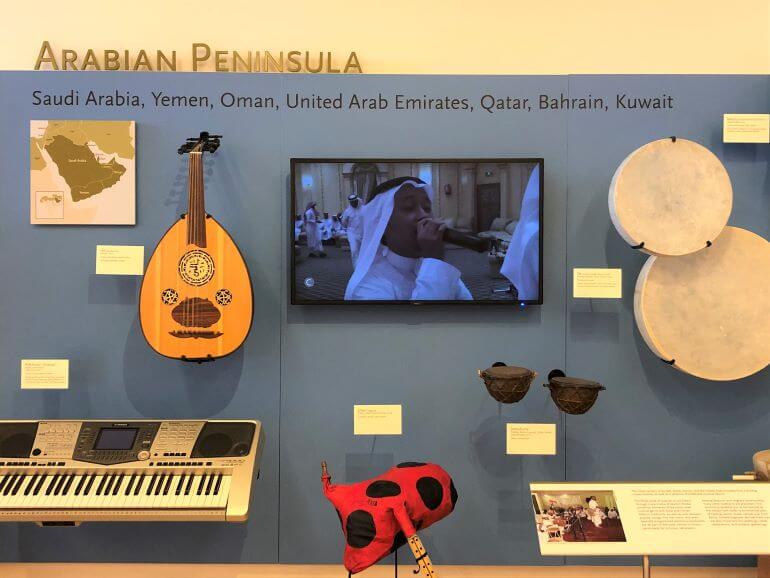 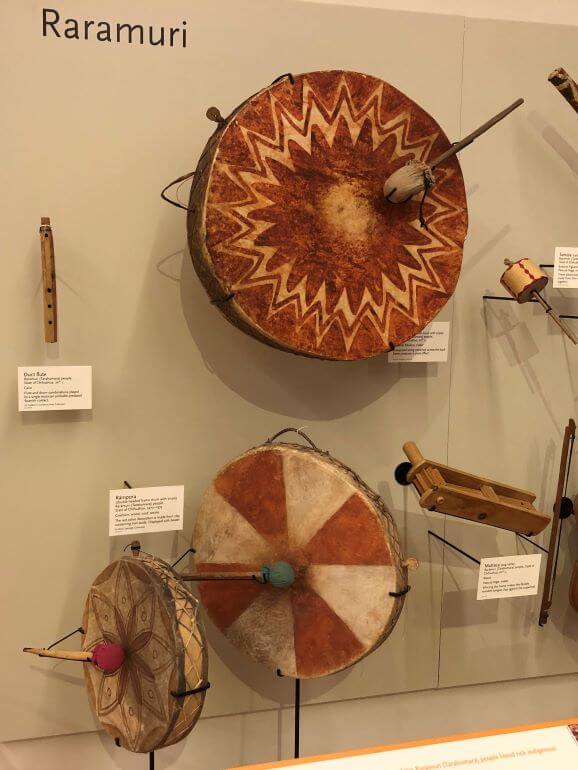 Instruments of the Rarámuri people of Mexico 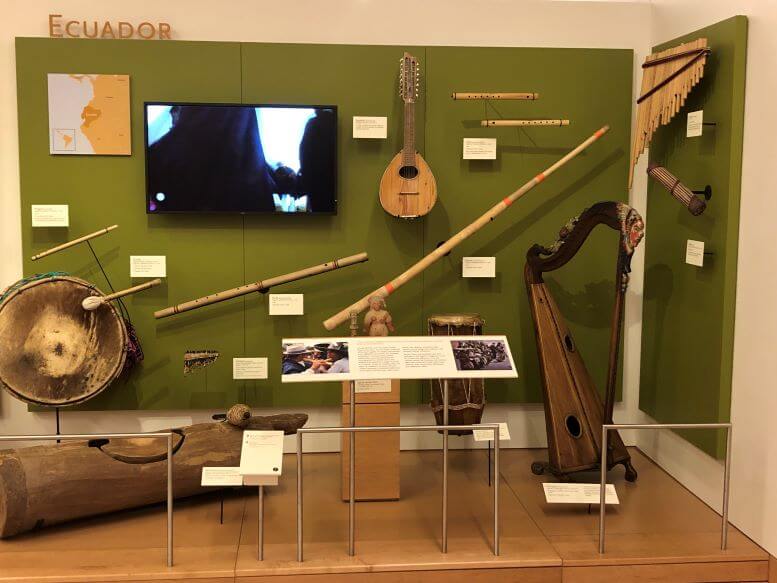 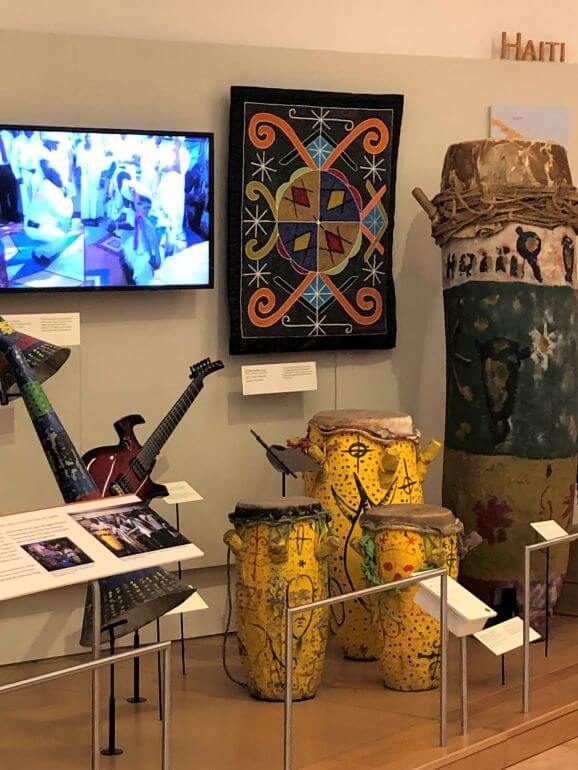 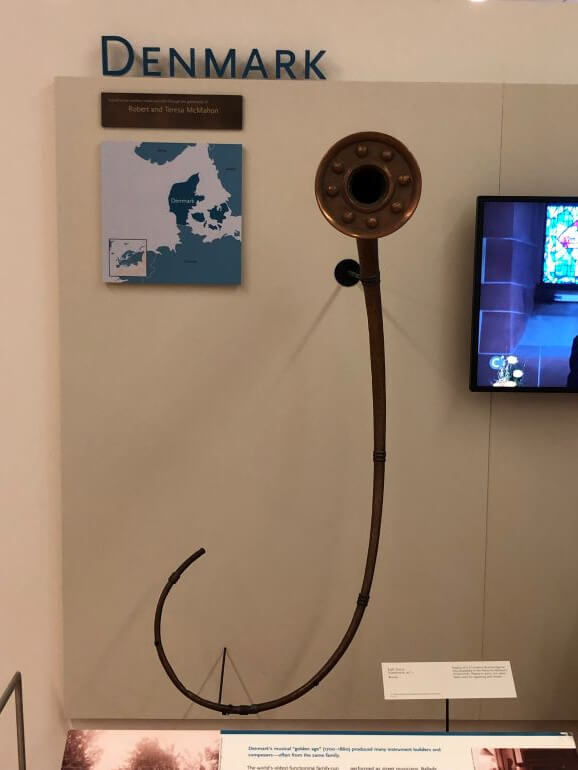 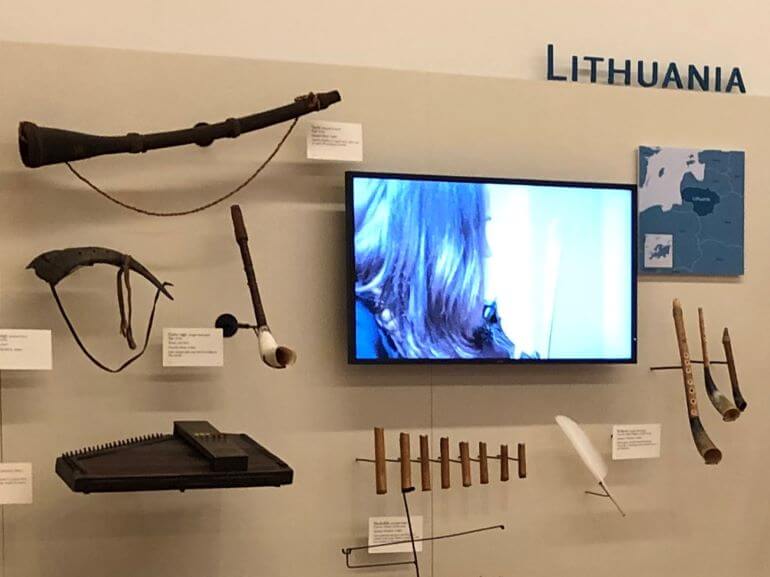 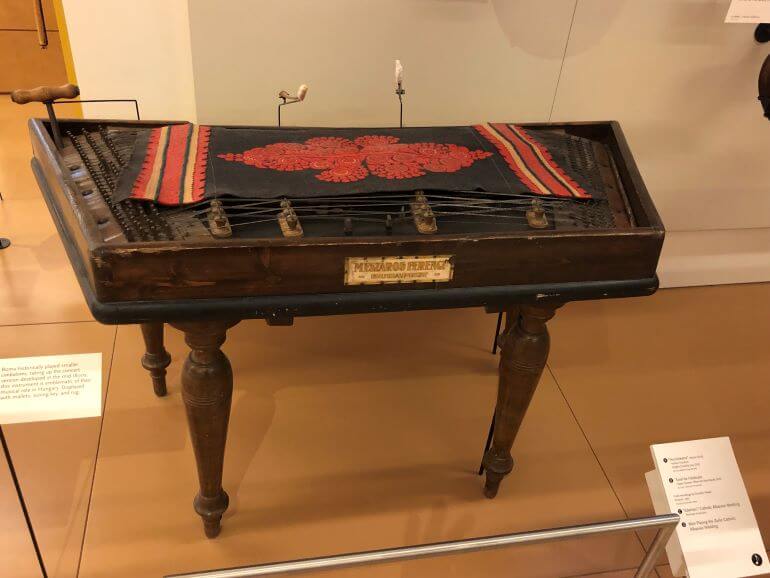 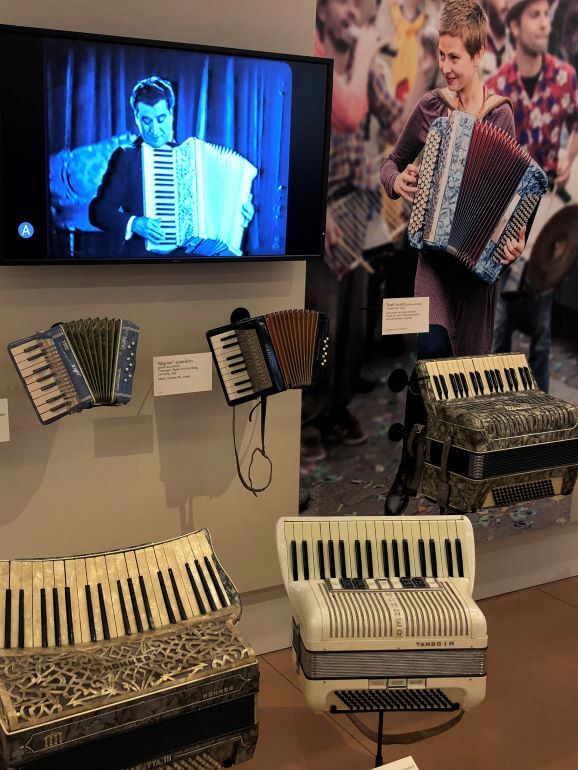 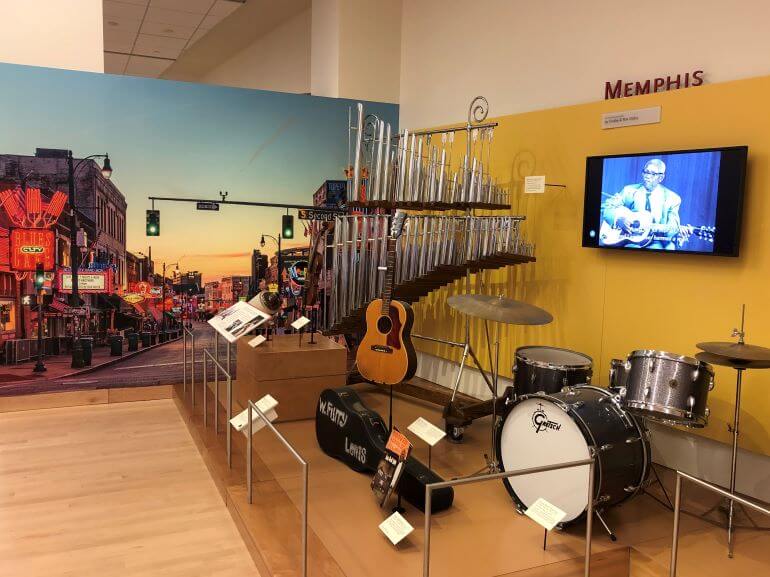 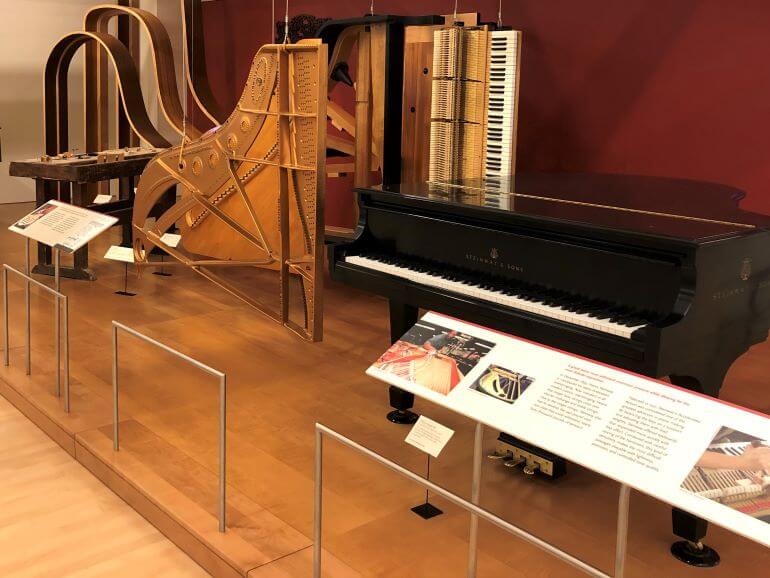 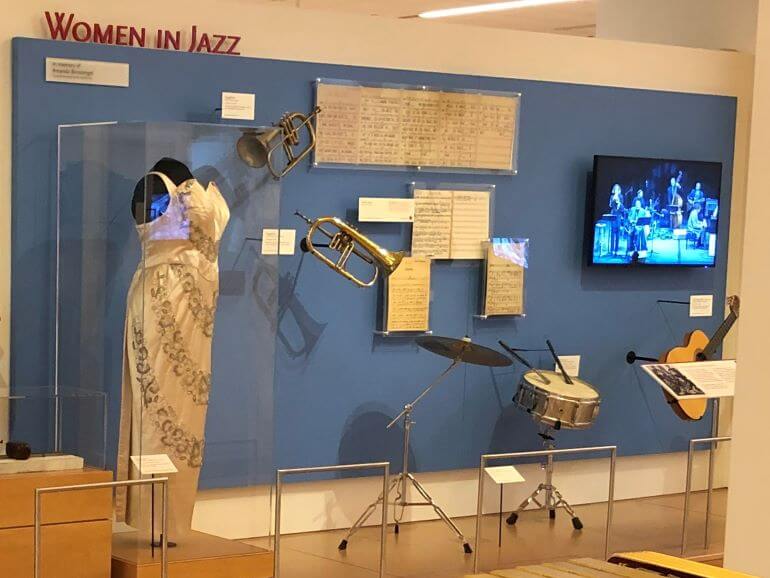 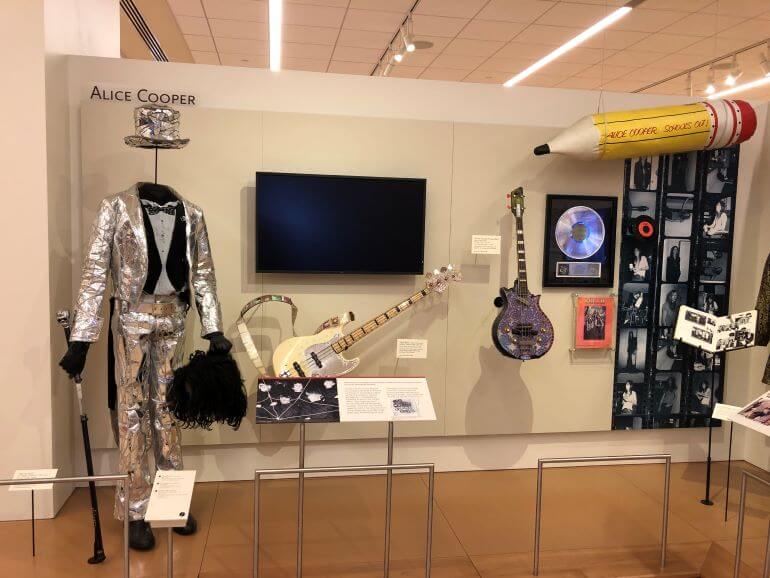 Alice Cooper exhibit (the band was formed in Phoenix) 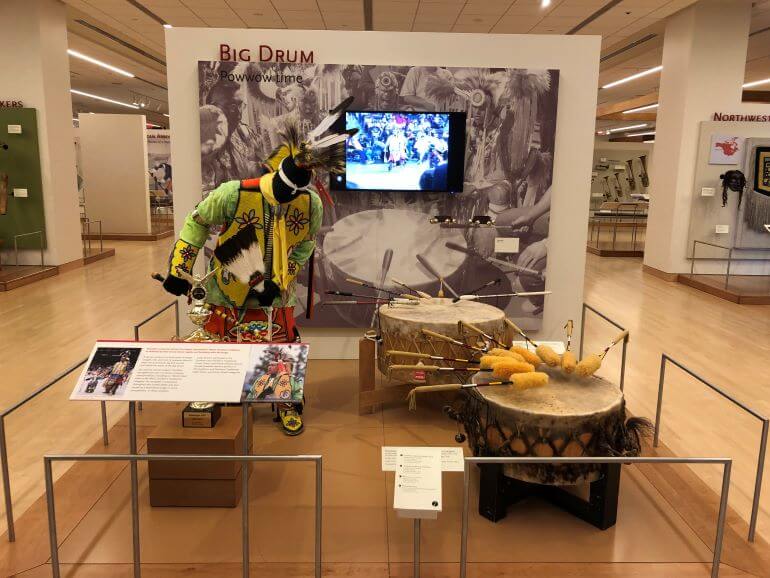 Inside the Artist Gallery you have a chance to get up close to their signature instruments and other artifacts of famous musical artists have been donated or on loan for the collections. The descriptive plaques and videos are informative and entertaining. Some of the performers you’ll recognize are Tito Puente, Maroon 5, Elvis Presley, Glen Campbell, Leonard Bernstein, Pablo Casals, Ravi Shankar, Black Eyed Peas, Buddy Rich, and Carlos Santana. 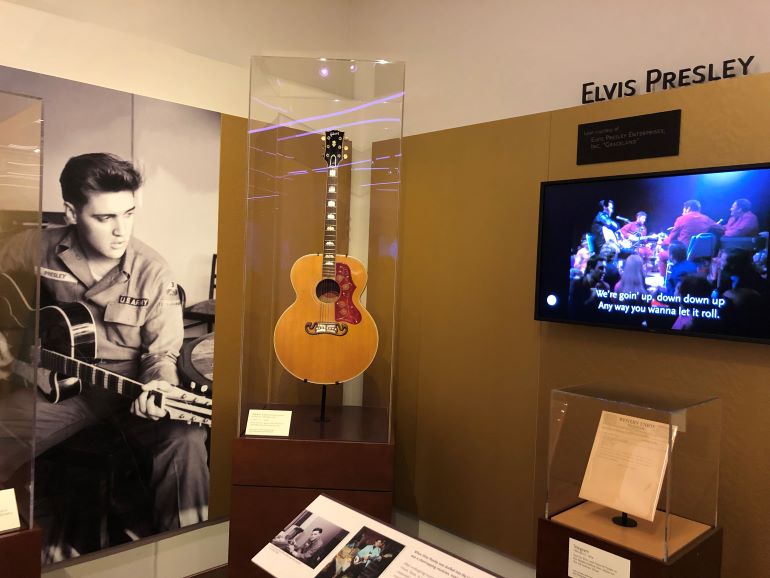 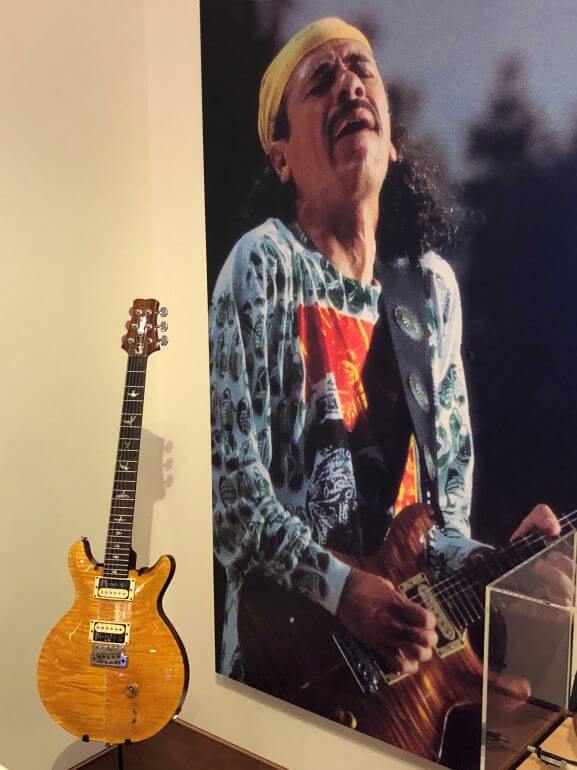 Don’t miss the Clara Rockmore exhibit with a theremin, a rather strange form of touchless instrument played by the movement of hands around the device. It was created in the early 1900s as a result of sensor research by the Soviets. Clara is the most famous of those who have played the theremin musicians.

The Mechanical Music Gallery has a fun collection of player pianos and other instruments that effectively play themselves as they are mechanically programmed on pinned cylinders or music rolls. We were lucky to be there in time for a demonstration of gallery’s highlight, Apollonia, a large dance organ, the kind that was commonly found in musical halls in Belgium and the Netherlands in the late 19th century to the 1960s. Apollonia has organ pipes, drums, accordions, saxophones, and a xylophone that appear to operate as if a musician was playing them. 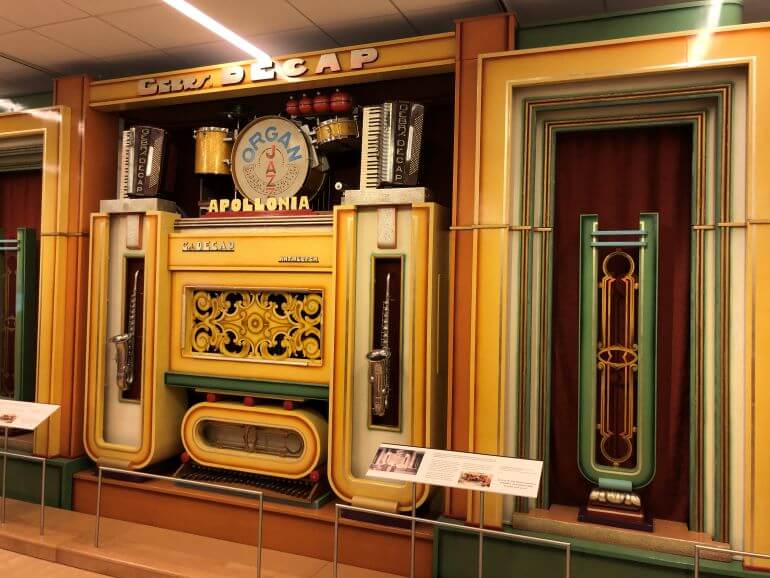 Given your time and interests, these are other places to consider seeing at MIM. They are on my list for future visits.

Food and drink tip: Food and beverages, including water, are not allowed anywhere in the museum besides the Café Allegro and the Family Center on the ground floor. So be sure to hydrate beforehand and take a café break.

Comfort tip: On the hot summer day we visited, we found the air conditioning to be turned up quite high. In case the same is true when you go to MIM, have a sweater ready to be comfortable. Of course, your preferences and circumstances may be different!

Timing tip: Although I usually find that two hours in any museum is about all I like to spend (either information overload or I just don’t have the time), I would suggest that MIM is worthy of several hours. Even then, you might want to come back again. If you can plan a full day, take a break at the café for lunch or snacks in between galleries. Living in nearby Scottsdale, I’m lucky that I’ll be able to return to be able to explore more and revisit favorite parts of the museum.

Membership tip: If you’re a local and plan on making return visits during the year, you may want to consider a membership. There are other membership benefits as well.

Have you been to MIM? Are you a music lover or a traveler who loves music and cultures around the world? MIM is for you!

15 thoughts on “Musical Journeys Around the World at MIM Phoenix”

"... for better, for worse, for richer, for poorer

The allure of going places — in this case by tra

I like taking photos of Mr. TWS when he’s not ex

Thanks, @travelingjudi, for inviting me to the #wo

It’s not often I post animal photos, but thought

Oh, for the days of walking around the old city ce

We can do this! What a great idea by Dorothée Lef

We call it the “red minute” (and often the mou

Oh, the beauty of the Sonoran Desert! And if you i

Ah, the romance! One of many reasons that I will v

Took a little drive to Fountain Hills the other da

Reflections ... Remembering our veterans and falle