Back when Mr. TWS and I first got married in September, 1991 we were given a wedding gift certificate for a ride and lunch on the Napa Valley Wine Train. At that time, the Wine Train had been in operation for only two years. We were thrilled because we’d heard so much about it as the new must-do experience in Napa wine country. So the following summer, we boarded the train in Napa for our three-hour ride and gourmet lunch. It was a great time, and we’ve often recommended the trip to others. Finally, after all these years, we had our second date on the Napa Valley Wine Train and enjoyed it just as much. In fact, with the added bit of nostalgia it was even more special. 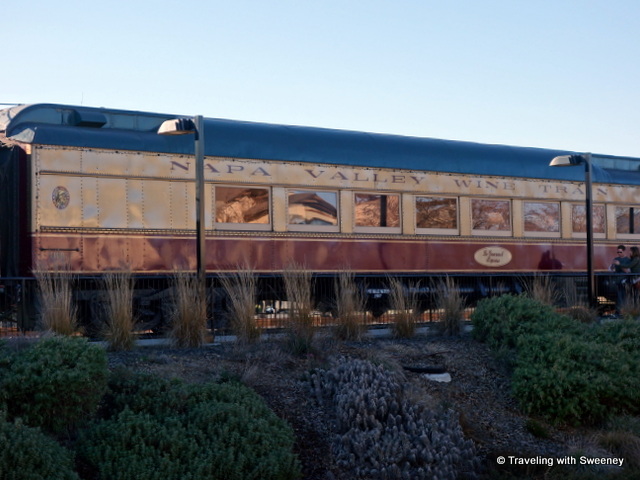 A bit of history

I think the history of the Wine Train is interesting so I’ll share a little of it here. The train travels on a rail line built in 1864 by Samuel Brannan, San Francisco’s first millionaire, for transporting visitors to his spa resort of Calistoga (the town he founded, now a popular Napa destination). It was important transportation connecting Napa Valley communities to San Francisco (via train and ferry) and in 1885 was purchased by the Southern Pacific Railroad, which later extended the line to connect with their main line in Suisun, California. Passenger service was discontinued in 1930, but the railroad continued freight service on the line until 1987. A group wanting to preserve the Napa railroad and restore passenger service with the present concept began operations (after some significant legal hurdles). The company was headed by President and CEO Vincent DeDomenico, who was the inventor of Rice-A-Roni and former owner of Ghirardelli Chocolate (brands with which you’re probably familiar). DeDomenico was CEO until his death in 2007. Members of his family are still directly involved with the Wine Train and active as investors and board members.

Aboard the Napa Valley Wine Train for a second time

Had things changed? Not that we could tell, although we toured more of the train this time and also had a different car and meal option. One thing hadn’t changed — the train is beautifully maintained and still has the same charm of days gone by that we really liked the first time. 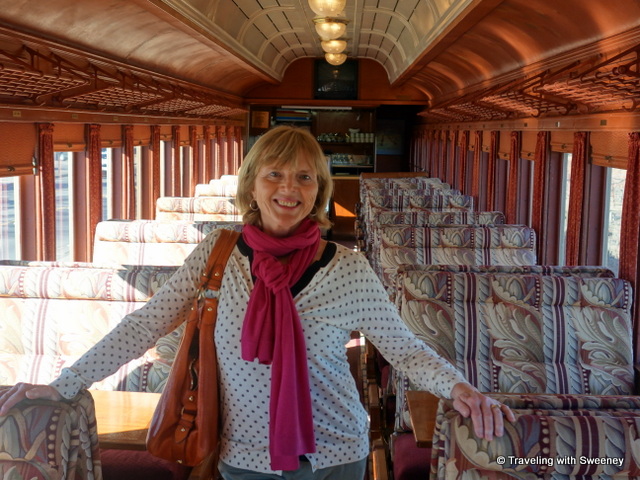 The cars that make up the Napa Valley Wine Train (some named for wines — Chardonnay, Zinfandel, Merlot and Cabernet Sauvignon) came from various sources. Two were originally built for the Southern Pacific Railroad as passenger coaches and purchased from a railroad museum in South Carolina; the Gourmet Express Dining car in the photo above was a Pullman Sleeper car built in 1917 and purchased from a private party in the late 1980s; six cars were purchased from the Denver and Rio Grande used on the Denver Ski Train which was updating its cars with modern lightweight cars; and the Dome Car, one of 10 built by the Pullman Standard in 1952, was used on various railroads before being acquired by the Wine Train. When the cars were restored for use on the Napa Valley Wine Train, the elegant coaches of luxury railroads such as the Orient Express were used as models. 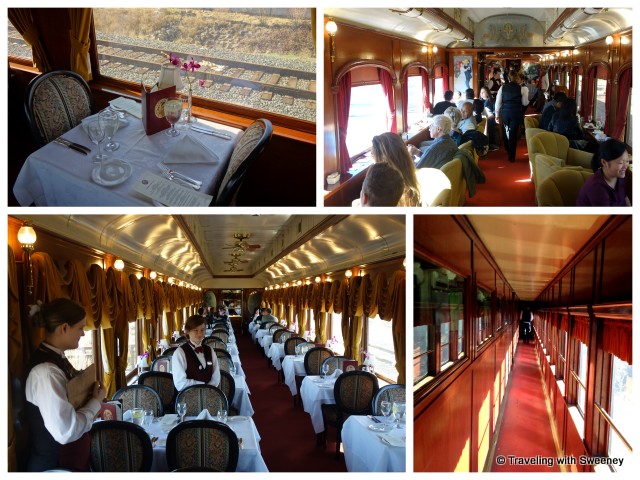 The latest addition to the wine train, the Power Car, began its first runs in June 2013, and is aptly named “Grappa” ( a strong spirit made from grapes). It ensures that there is always power on the train even during the locomotive turnaround in St. Helena where the train begins its journey back to Napa. 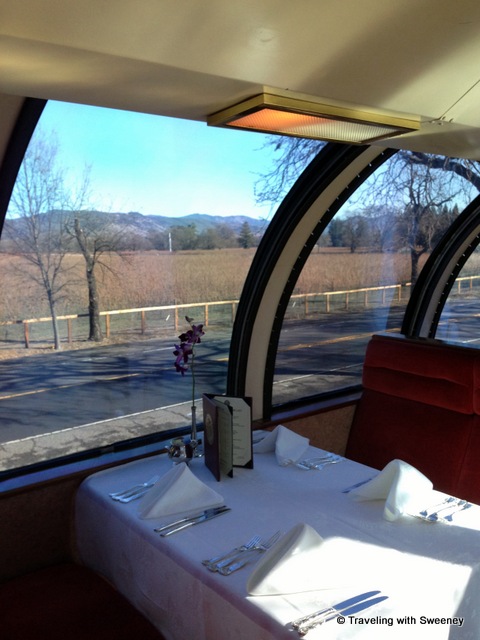 Our table in the Vista Dome car

This time, we were riding in the Vista Dome, the most private car with an elevated observation style to provide awesome scenic views while enjoying our lunch. The road between Napa and St. Helena is a pretty drive at all times of year and this was a pleasant way to see the scenery and some of our favorite wineries such as Long Meadow Ranch. The picture above shows the visibility in the car and also the train paralleling Highway 29. It also shows the setting for our delicious and romantic “second date” meal which began with a glass of Chandon sparkling wine and was followed by a selection of premium Napa Valley wines. 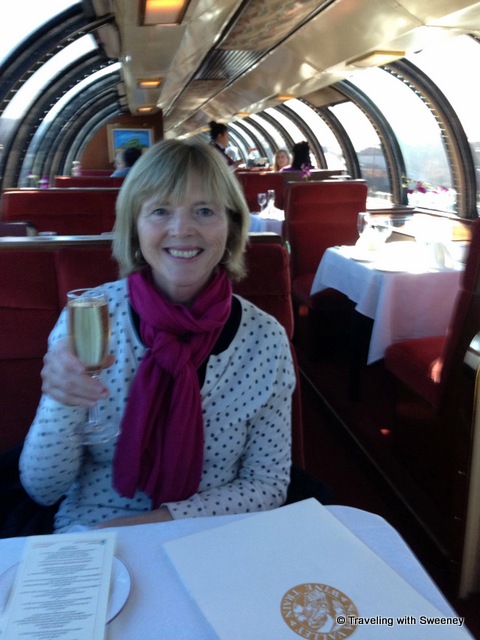 Starting the journey with a welcome glass of Chandon sparkling wine

The Wine Train’s route from Napa takes you through the towns of Yountville, Oakville, and Rutherford on its way to St. Helena. Most guests make a round trip, but those who have purchased guided winery tour packages disembark at the appropriate station along the way. 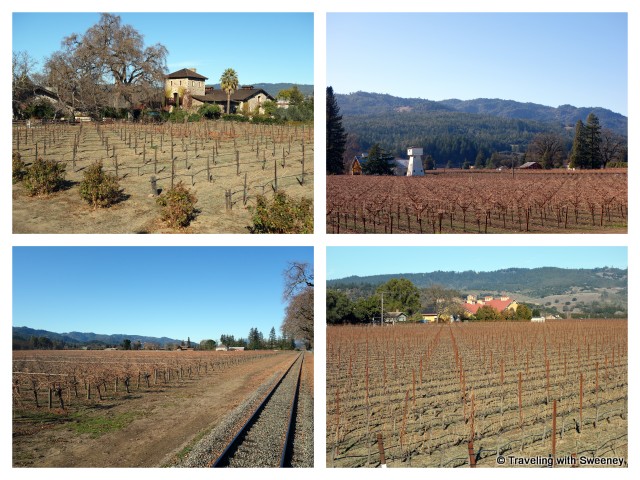 Scenery of Napa Valley from the Wine Train

We’ve spent a lot of time in Napa wine country over the years, but never get tired of the area’s beauty. In the summer, the grapevines are in full growth and full of hanging bunches of grapes. In the fall, the leaves turn to gold, giving the region a touch of autumn colors that we don’t see in many other areas of California. To me, the winter gives Napa its own special ambiance, vast areas of other types of agriculture are more visible, the hills that line the valley are normally a lush green (though not so far in our drought year), and the area is dramatically quieter and more peaceful than in peak tourist seasons.

From the on-board kitchen

Passengers are allowed to walk through the cars, including the three kitchen cars overseen by Chef Kelly Macdonald where all meals are prepared to order. We were impressed by how the cooks and other kitchen staff were working effectively and efficiently together in such close quarters preparing dishes without missing a beat as the train travels along the tracks. 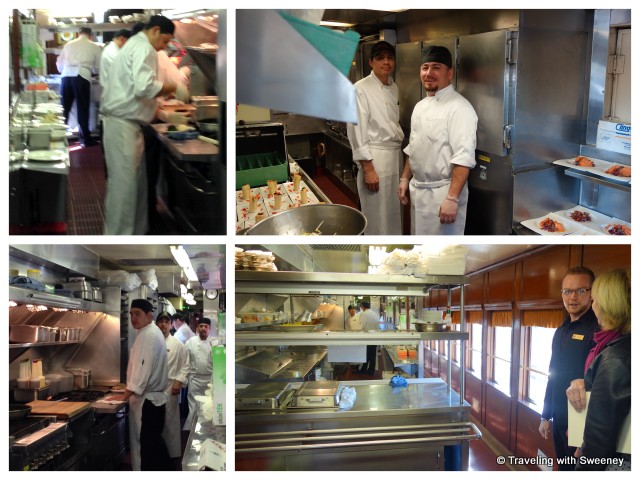 In the kitchen on board the Napa Valley Wine Train

All of the seasonal menu selections are made based on sustainability and high quality standards using locally sourced ingredients. Produce on the train comes from local farmers’ markets or is sourced from local farms.  The goat cheese is from Skyhill Farms in Napa where the Wine Train actually chooses which goat gives the milk for the cheese they buy. 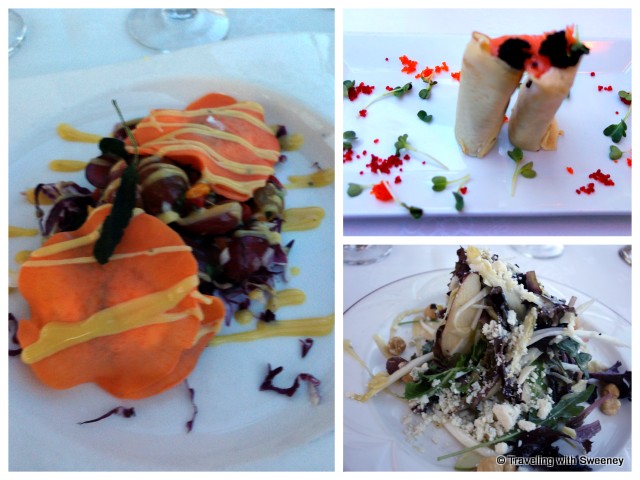 We started with hors d’oeuvres of  Flourless Yam Ravioli with the house-smoked goat cheese and Smoked Salmon Crepes with American caviar.  That was followed by the Red and Green Apple Endive Salad. 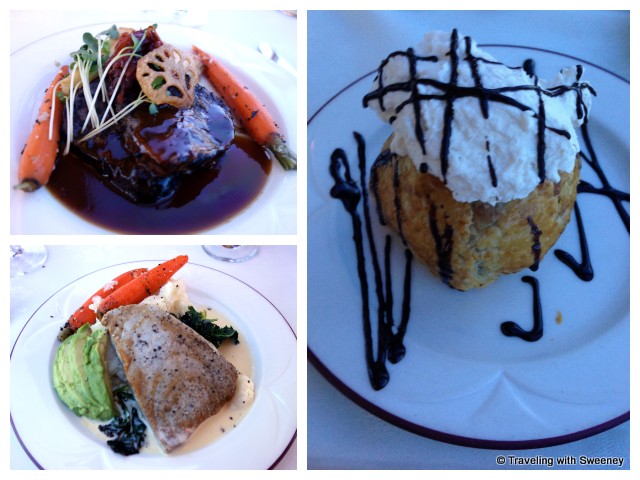 For our entrées, it was Sea Bass for Mr. TWS and Roasted Beef Tenderloin for me. The beef served on board comes from Five Dot Ranch in Napa where the cattle are raised in “low-stress” environments, 100% free of antibiotics or additional hormones. I was totally full after the main course, but I couldn’t resist the warm Chocolate Pot Pie for dessert. 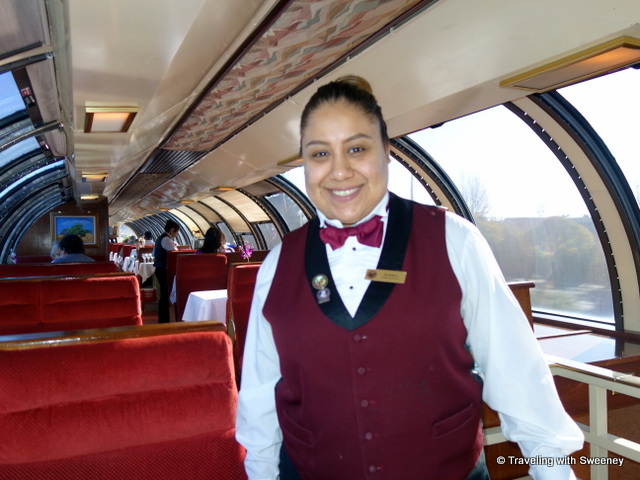 Our server Andrea in the Vista Dome dining car

Each course was pleasantly served by Andrea who has been with the Wine Train for several years. She really helped make the experience even more special. I particularly liked that she was still excited about the views she sees every day and expressed a sentiment consistent with ours — that these scenes are captivating in all kinds of weather, not just on warm, sunny days like this one. She mentioned that the previous day was cold and rainy, but the passing scenery was still beautiful in her eyes.

It was interesting to meet several staff members who have been with the train for many years. For some, working with the Wine Train runs in the family. Such is the case with Nicholas Giaccio, a Wine Train marketing representative who gave us a tour of the train before we left the station at Napa. His father, Anthony Giaccio, started with the train when it first started running, and is currently CEO. Nick showed a clear enthusiasm for his work and the history of the train. He enjoys telling the story of the train to others, saying, “It’s so much fun to talk about it.” We saw that same enthusiasm with others such as the conductor and customer service people we met when we boarded, during the ride, and as we disembarked. 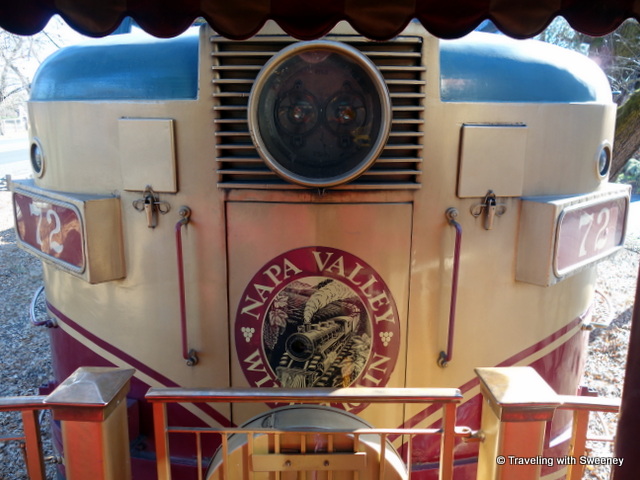 When we reached St. Helena between the main course and dessert, we took a stroll through the other compartments. From the observation deck at the back of the train, we breathed in the fresh air of Napa Valley and enjoyed the sunshine on our faces. It’s in St. Helena where they switch the locomotive from one end to the other. So Mr. TWS took a walk to the front of the train to catch the shot above. What had been the last car on the train was now the first and the locomotive was facing the platform.

Who are these people? 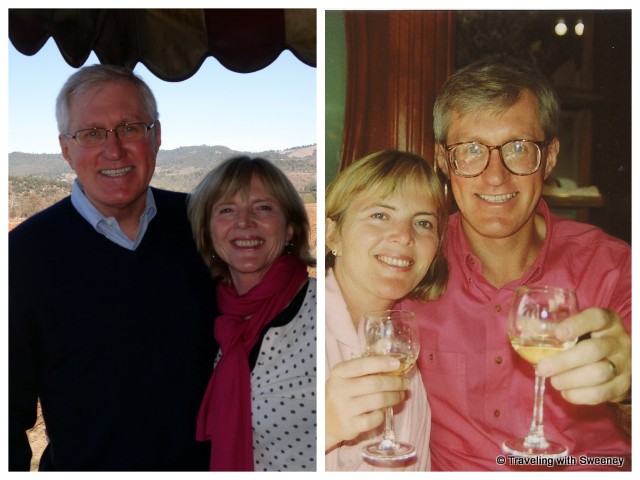 If you are visiting the Napa Valley for the first time or a return visitor, this is an experience that you should consider including on your itinerary. If you live in the San Francisco Bay Area, the Wine Train offers a unique dining experience on a Napa getaway. As we’ll attest, it’s also an alternative for a romantic date or special event.  It is a scenic, easy-going tour along Napa’s vineyards that for three hours takes you back in time amid the ambiance of a golden age when luxury trains like the Orient Express were the main ways to get to far away places.

Disclosure: Our second date was hosted by the Napa Valley Wine Train, but our opinions and perspectives are totally our own — as always.

64 thoughts on “Second Date on the Napa Valley Wine Train”