On Molokai, they mean it. 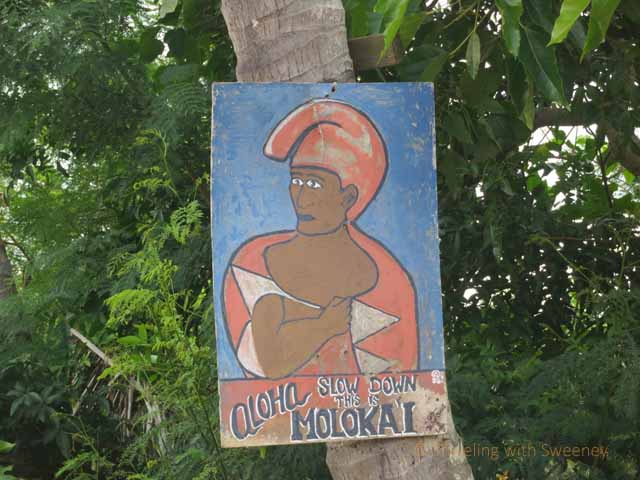 Whenever we mentioned to someone that we would be spending two nights on the island of Molokai, we got common responses. “Oh, it’s very peaceful there.”, “There is only one grocery store.”, or “There’s nothing to do.” Yet others said that Molokai was their favorite island.

What do I think now that I’ve been there? Although I wouldn’t say that it’s my favorite island, it is certainly worth a visit and I’d like to go back!

This sign we saw on a palm tree above really emphasized a slowed down way of life that we felt almost instantly.

Molokai is not a major tourist destination and the residents would like to keep it that way, generally resisting commercial development. For a visitor, it’s a refreshing contrast from the over-developed places we’ve all come across at some point in our travels. But it also means your sightseeing options are limited. It’s not that the people of Molokai aren’t welcoming to visitors – they are. They just don’t change their lifestyles and traditions to accommodate tourists.

If you are looking to visit the few sites open to tourists, do some shopping in the little town of Kaunakakai, or find a lot of dining options, don’t visit on a Sunday (unlike us) when most of Molokai’s businesses are closed. However, I can recommend Molokai Pizza which presented a pretty tasty dinner option (even on Sunday). We had take-out pizza from there both nights. 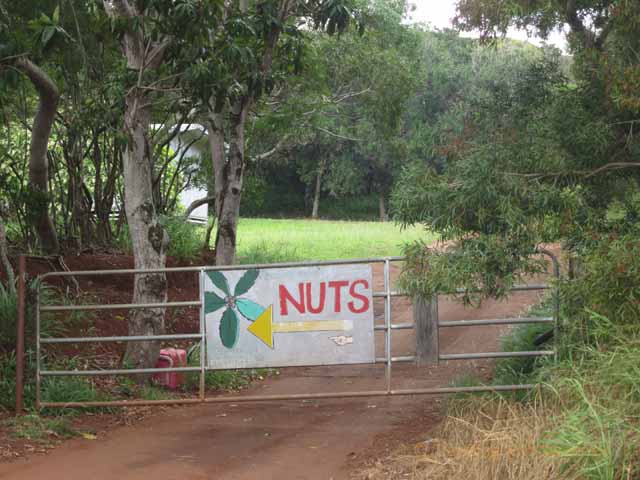 This way to the Macadamia Nut Farm

We were eager to take a tour of the Macadamia Nut Farm when we saw this sign pointing us in the right direction.

However, we were disappointed to find it closed, despite what the guide book said about its hours for tours. We later found out that the owner is somewhat eccentric and is driven more by his mood than the schedule.

There were a few more misses ahead for us. We stopped by the coffee plantation, but found out that they had stopped offering tours a few years earlier, although there is a gift shop and sandwich shop on the premises. We also didn’t have any luck when we tried twice to experience what Lonely Planet called “the island’s best food” at Kualapu’u Cookhouse — each time we were told that they had just closed for the day, although we were there during the hours listed in the guide book.

Sadly, because our only full day on the island was a Sunday, we were not able to visit Kalaupapa National Historical Park on the northern coast of Molokai, a key part of Molokai’s history, because it can only reached by mule tour (Monday – Saturday) or hiking (for which you need a permit).

The Kalaupapa Peninsula pictured below from the overlook in Pala’au State Park, is the location where people afflicted with Hansen’s Disease (leprosy) were banished beginning in the early 19th century after being removed from their homes throughout the islands by the order of King Kamehameha V. It was really seen as the only solution to control the epidemic after exposure to the disease from visitors to Hawaii. Although the law to do this was abolished in 1969, there are still a few remaining elderly patients who have chosen to stay there, since it has become their home. 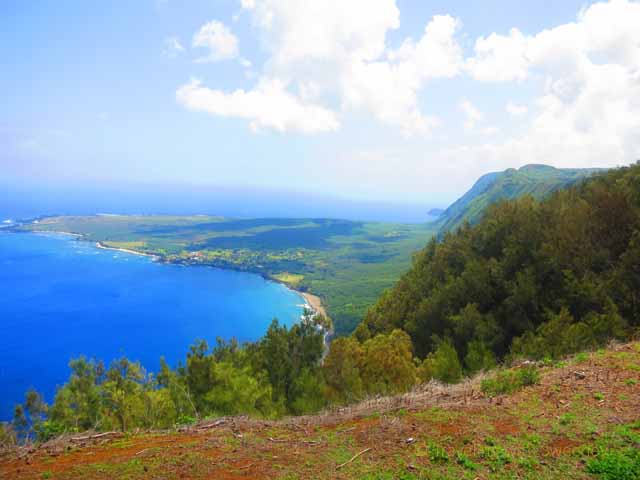 The view from the overlook was awesome and I can imagine the steep path down the cliff on mule or by foot and the sights from the peninsula below would have been beautiful. The tour is one of the things for which I would make certain to plan better, should I make it back to Molokai. Whether descending on foot or horseback the round trip including the tour below takes 7 hours. We would not have had time to return our rental car and get to the ferry in time on Monday. Based on our experience, I recommend diligent attention to scheduling so you can visit the site. 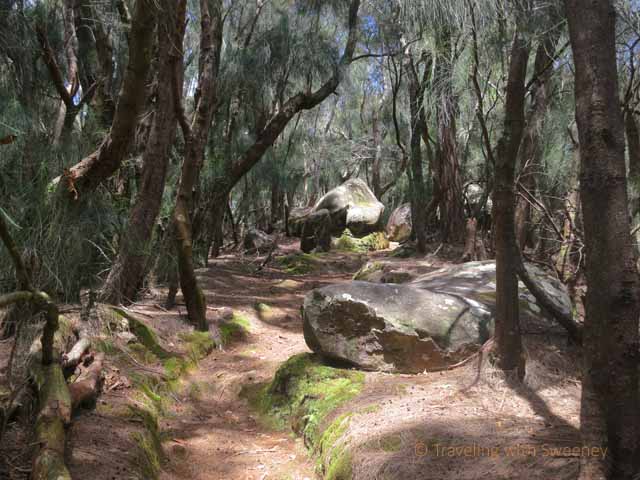 Besides the overlook at Pala’au State Park there is a short path through the woods to the legendary Kauleonanahoa (“Phallic Rock”) pictured below. From the picture I think you can understand the origin of the nickname. The rock appears to be a natural formation and legend has it that a woman bringing offerings and spending the night there would become pregnant. 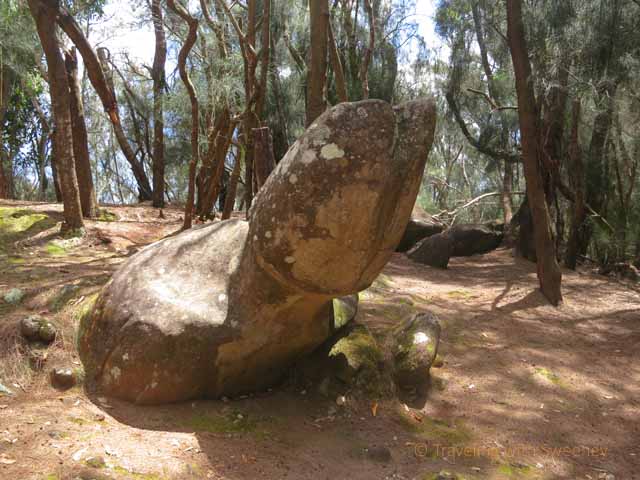 For those who might show disrespect for the rock, at the site is the sign shown below. 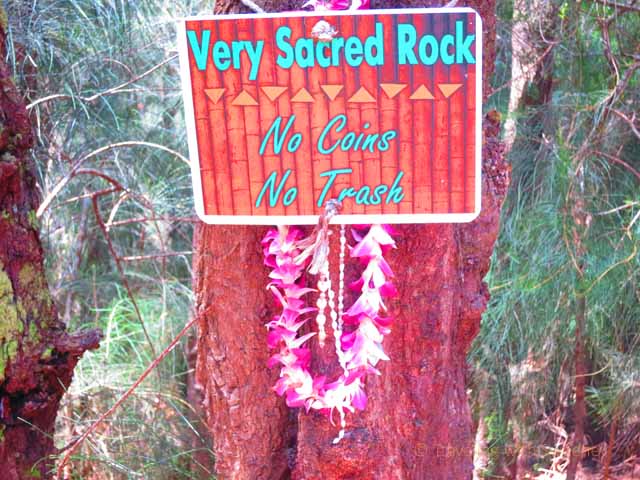 Also on the drive to the east side was one of the churches that Father Damien had built on Molokai. St. Joseph’s Church was beautiful in its modesty. Father Damien was a Belgian priest who came to Molokai in 1873 to help the patients of the leper colony. He was there until his death from Hansen’s Disease in 1889. He was made a saint in the Catholic church for his kindness and sacrifice. 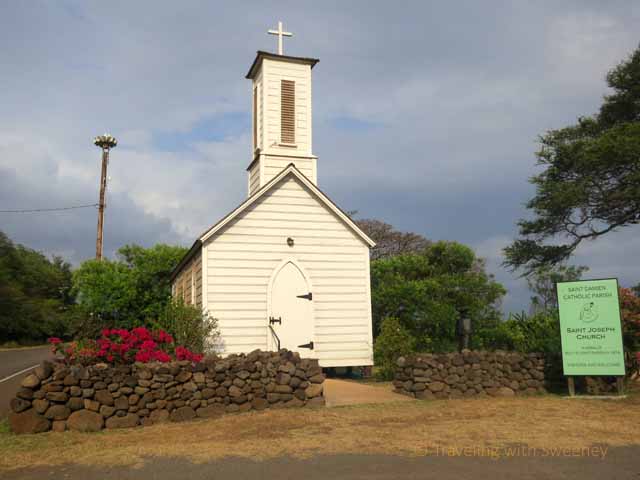 As advertised, the Molokai Museum and Cultural Center actually was open on Monday, so we got to visit before heading back to Maui. The museum was well worth the time. It offered examples of local art, historical and cultural artifacts, and information about the colony on Kalaupapa. There also were the restored rustic buildings that were once part of a family-run sugar mill. 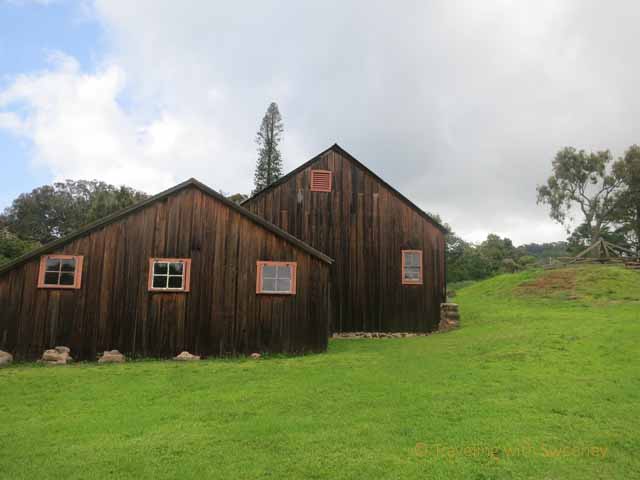 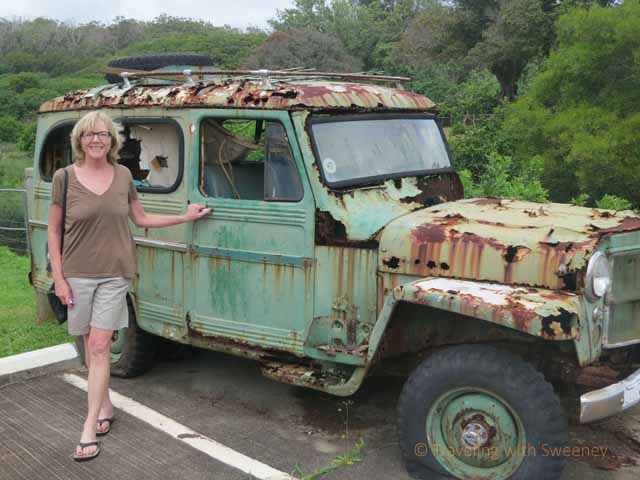 This dilapidated old jeep, known as “The Green Hornet” is kept in the parking lot of the museum, donated by the family of the former land owner who used it to drive around his property.

A drive around the island 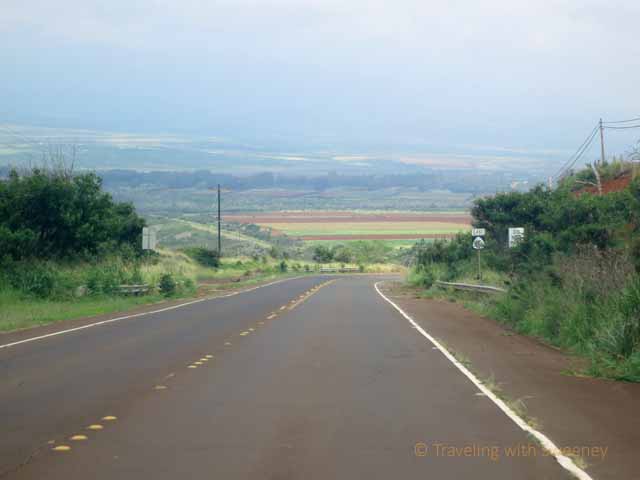 Molokai road trip on the west side of the island

In order to get around Molokai you really need to rent a car. We rented from Alamo who has a location at the airport. Since we arrived by ferry, they picked us up at the docks. The driver and representatives were friendly and helpful. 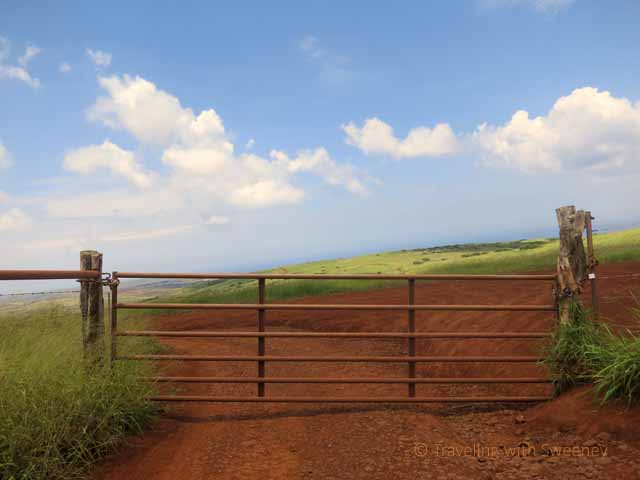 The landscape is lush and beautiful with roads running through rolling hills and along the coastline. Open the windows and enjoy the peaceful ride.

On the east side of the island the main road (Kamehameha V Highway) gets pretty hairy. It’s only one lane wide with twists and turns that makes seeing oncoming traffic impossible, so use the horn before entering a turn. We took this road past Twenty Mile Beach, but turned around before it started uphill right on the cliff’s edge though we had been hoping to get to the waterfall overlook near the end of the road. 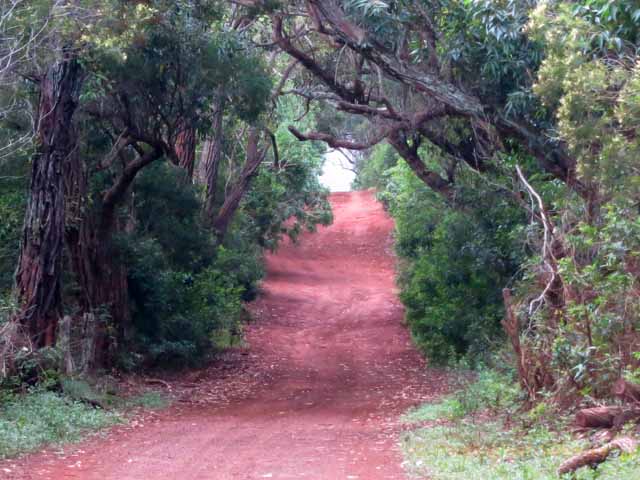 While on a drive, we spotted a sign pointing to the Ironwood Hills Golf Course. Now we thought we’d see where the action was on Molokai. Mr. TWS was skeptical there was anything there; it seemed so remote a location. The driveway past the sign was very long, tree-lined and deeply rutted. At its end, there was indeed a 9-hole golf course – but no golfers in sight. We spoke to the owner for a bit and it was tempting to spend some time on such a quiet course where we wouldn’t have to worry about looking like beginners. But our time was now running short. We also spoke with the local artist who was painting a mural on the trailer that serves as the golf shop. 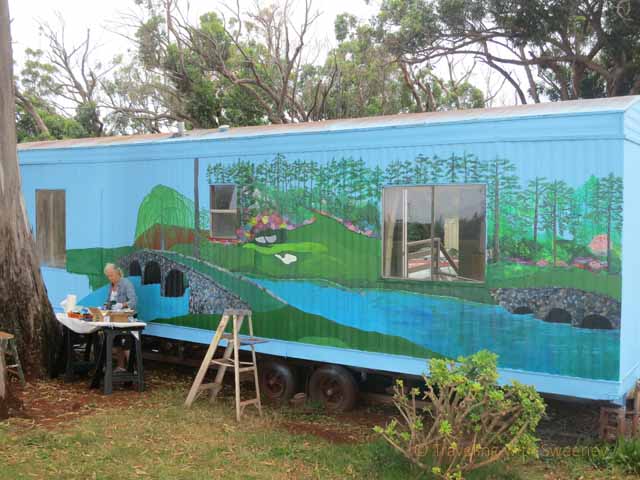 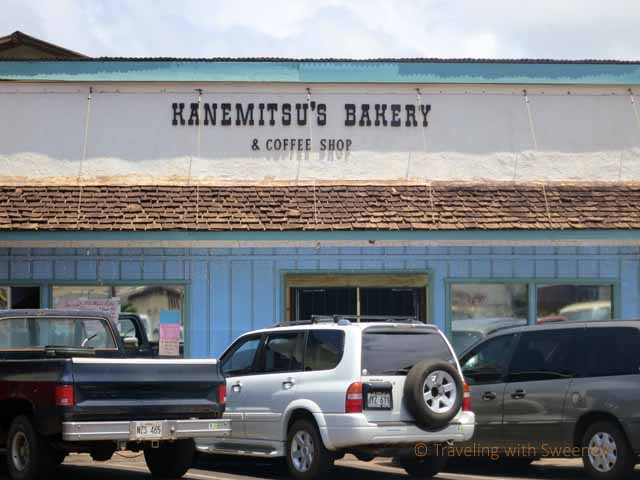 People were right about limited shopping in the town of Kaunakakai, but there was one place we definitely wanted to see.

Before we left Maui, people were telling us about Molokai bread. Kanemitsu Bakery is the place where you can buy it and other bakery treats. Apparently, there are certain days after closing when you can show up at the back of the bakery and buy freshly-baked Molokai bread right out of the oven. At least that’s what we heard. We passed on the full loaves because they were very large, but sampled a few smaller bread rolls which were delicious. 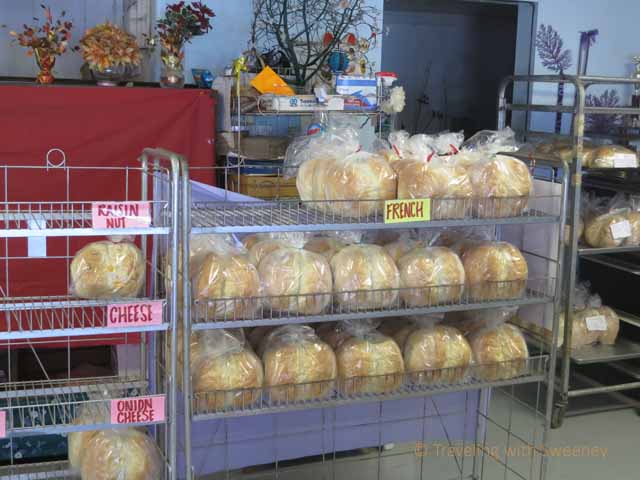 The best of Molokai — head to the beach!, 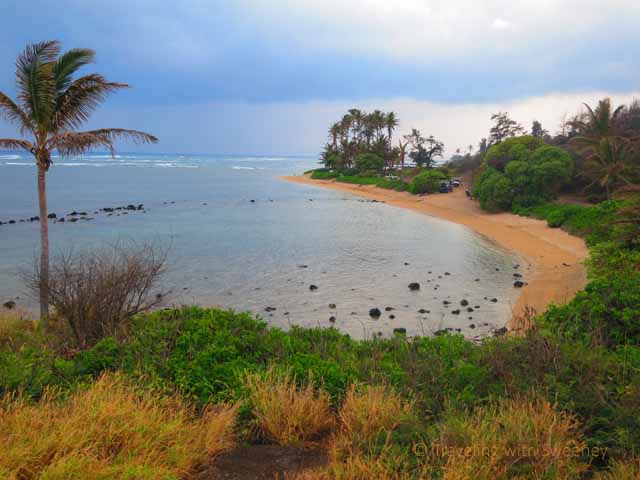 The Lonely Planet book and local brochures highlighted some great beaches on the island. Mr. TWS loves to be in the water and had a great time swimming and snorkeling in the beaches on the east side of the island like Twenty Mile Beach, which is appropriately located at the 20-mile marker along the highway. The beach is pictured from an overlook in the photo above and at closer range with Mr. TWS snorkeling in the water. 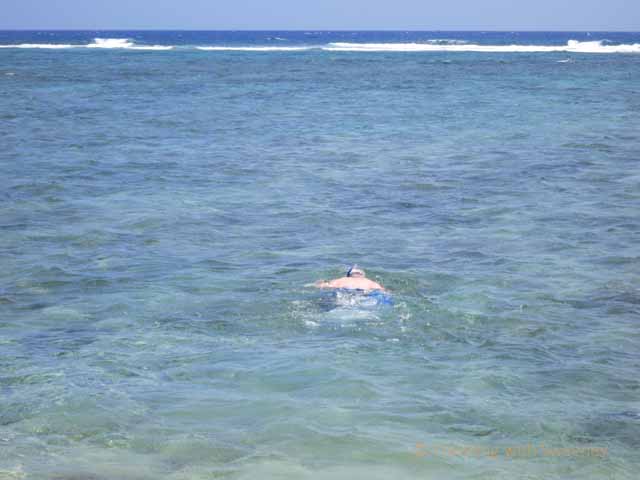 The water for the snorkeling was very shallow all the way to the reef and three were many rocks and coral and lots of fish. The water was a bit rough on this day but Mr. TWS entered and exited with big smiles. 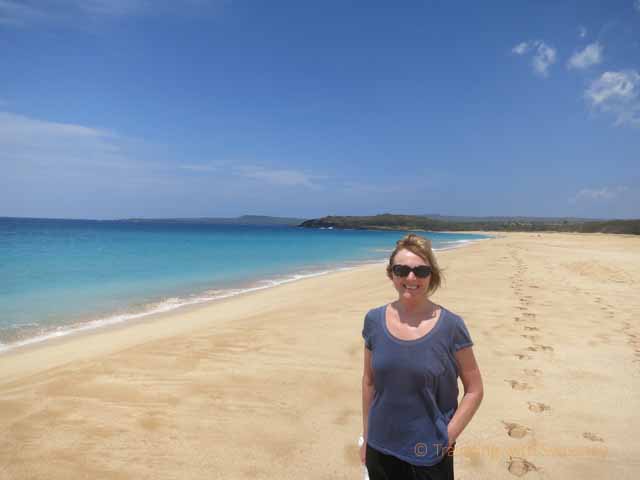 Papohaku, my own private beach

There are also several inviting beaches on the west side of the island including Papohaku Beach (Three Mile Beach) pictured below. It was a spectacular stretch of ocean and white sand all the more dramatic since we were the only people in sight. It was not a good swimming area because of dangerous currents. But located further west we saw the beach that was a popular spot for locals who were picnicking and swimming.

Getting there and back to Maui 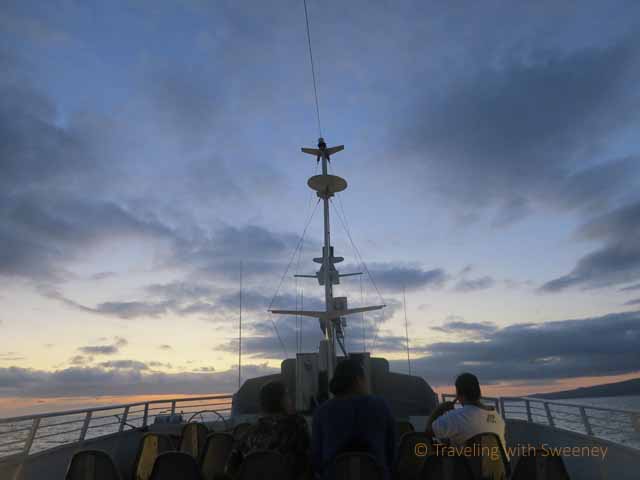 On the Maui to Molokai ferry

We were a bit apprehensive about the trip there and back because we were cautioned by several people about the rough currents between Maui and Molokai. It was recommended the we fly there instead, but ultimately we decided to brave the sea. We were lucky to have fairly calm waters both ways, but took Dramamine and had a glass of wine before boarding for preventative measures.

I would consider flying next time and make sure to coordinate the schedule with the mule ride. But we were glad we took the ferry this time because we watched a beautiful sunset, saw some whales and had a chance to talk with a few Molokai residents on board. 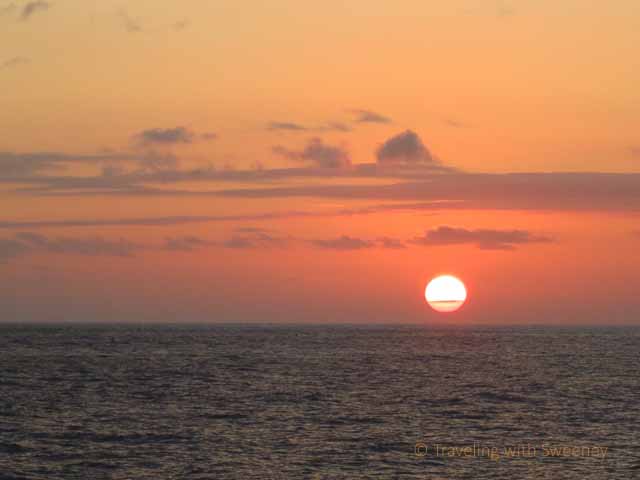 Maybe we should take Molokai advice more often and just slow down.

22 thoughts on “Slow Down: This is Molokai”