Sweeney and I love to go to Lake Tahoe, usually to ski or enjoy a summer break. Since it’s only a bit more than three hours’ drive from our home in the San Francisco Bay Area, we’ve been there many times. Driving to and around the lake is part of the fun. There are spectacular mountain vistas and the deep blue of the lake against clear blue skies works from almost any angle or elevation. 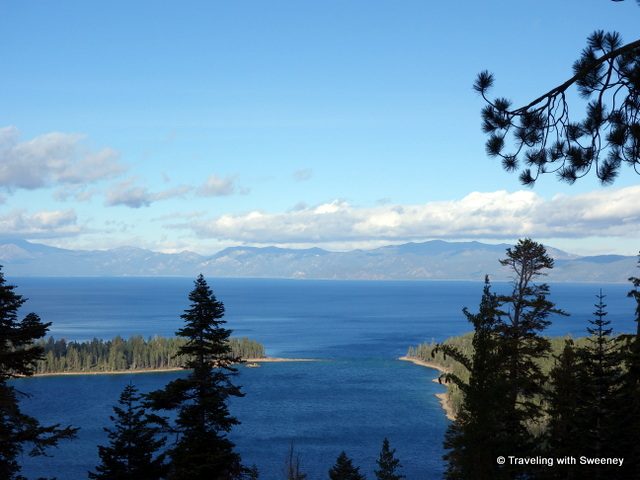 However, our recent trip to South Lake Tahoe was our first time ever in November, and we experienced some firsts for us that we highly recommend. As we headed over the mountain from Carson Valley, Nevada (a different direction than usual as we continued a three-day getaway), it appeared that we were going to have a spectacular day starting with a boat ride on Lake Tahoe.

In all of the times we’ve visited Lake Tahoe, we’ve never actually been on the lake, so a cruise on the M.S. Dixie II provided us with our first experience. 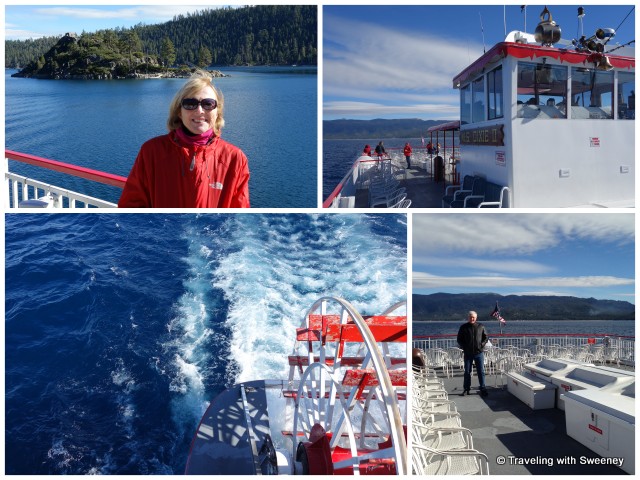 Aboard the M.S. DIxie II on Lake Tahoe

The “Scenic Emerald Bay” cruise, one of several tours available through Lake Tahoe Cruises on either on the M.S. Dixie II or Tahoe Queen, held the promise of getting views that could only be seen from the water and it didn’t disappoint.

The ship accommodates 520 passengers, but there were far fewer than that on this mid-November day. There was plenty of seating inside and out on three decks; I can imagine it being full during the summer but also that the trip would be worthwhile from any seat. On this brisk morning, many people were indoors but with the sun and our warm clothes we comfortably enjoyed most of the two-hour ride outside. Whether seated indoors or out, the views were the stars of the trip, though the PA narrative of lake history, points of interest, and Lake Tahoe stories and mysteries was good accompaniment. For instance, did you know that Lake Tahoe has its own Loch Ness Monster, Tessie? 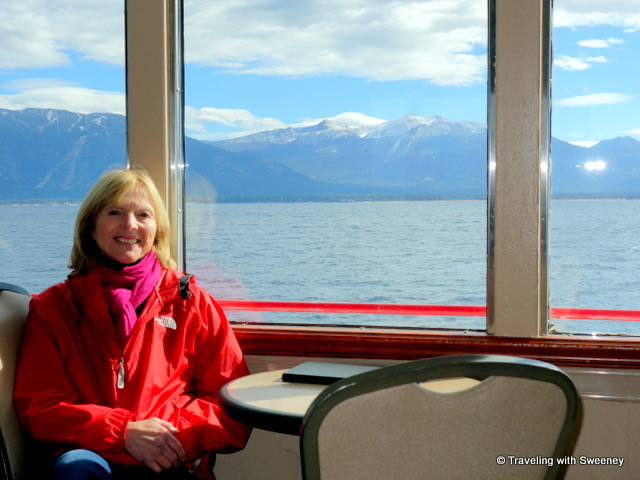 View from inside the M.S. Dixie II on our Lake Tahoe cruise

Starting from the harbor at Zephyr Cove, Nevada, we headed west across the southern end of the lake toward Emerald Bay on the California side. 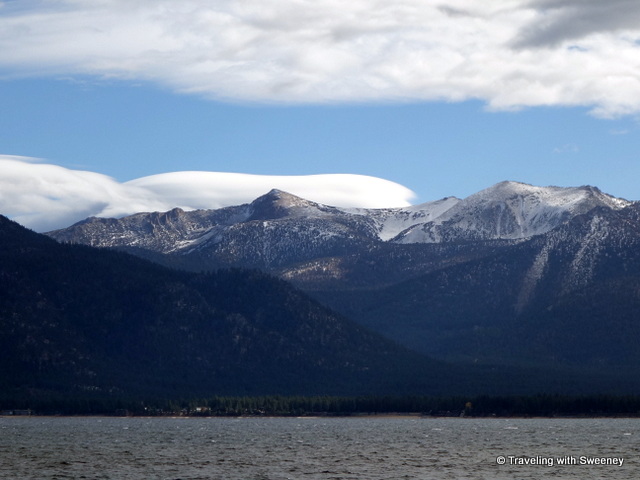 In every direction we saw the surrounding mountains and hills (some already had snow) beneath diverse and interesting clouds. 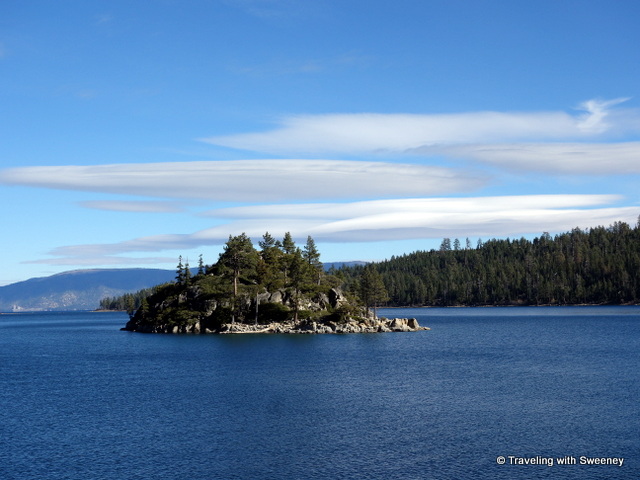 When we reached Emerald Bay, we did a slow circuit around Fannette Island, the only island in Lake Tahoe. We’d seen it before from lookouts on the road above and from the beach, but this was another interesting perspective and the steep cliffs were higher than they appear from above. 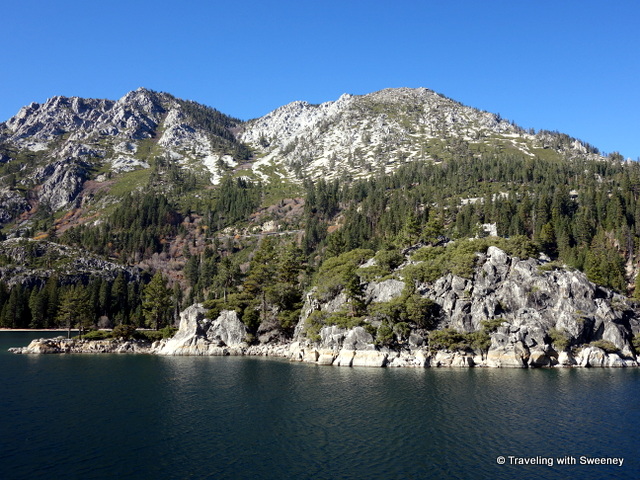 It was here that the PA narrative gave accounts of interesting aspects of this area of the lake, such as Vikingsholm, the “summer home” (38-room mansion which can be toured) of Mrs. Lora Josephine Knight on the shore of Emerald Bay; the tea house (slightly visible on top of the island in the photo above) she had built on Fannette Island; or the odd tales of the Hermit of Emerald Bay, 10-year (1863 to 1873) inhabitant of the island, Captain Dick Barter (and his ghost).

In the shallow water, we both commented on how clear and clean the water was. The clarity of the lake with its depth (1,645 feet at its deepest) are responsible for its unique deep-blue appearance. The shore line is 75 miles. I mention these statistics because people who haven’t had the good fortune of visiting are often surprised at the lake’s size. The cruise was something we hadn’t done previously because it seemed to be such a tourist activity, but we were happy we had and would highly recommend it to anyone, including experienced Lake Tahoe visitors. 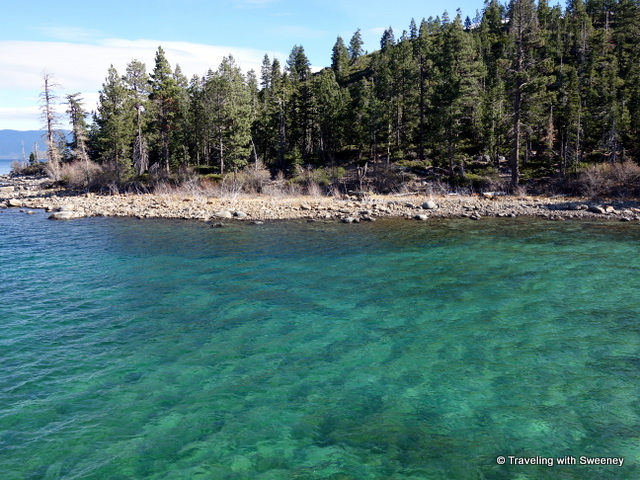 After the boat cruise, we had a short time for a scenic drive on Highway 89 which brought us to the top of the cliff that we had just seen from below in Emerald Bay. 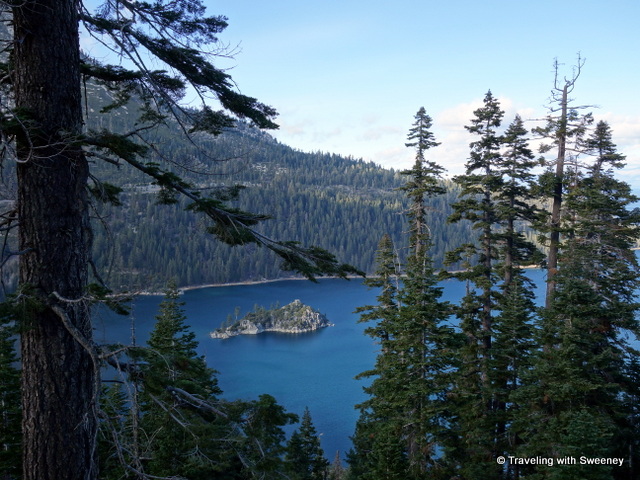 The road is scenic, fun, and even exciting at some points with hairpin curves and steep drop-offs (some without guard rails). 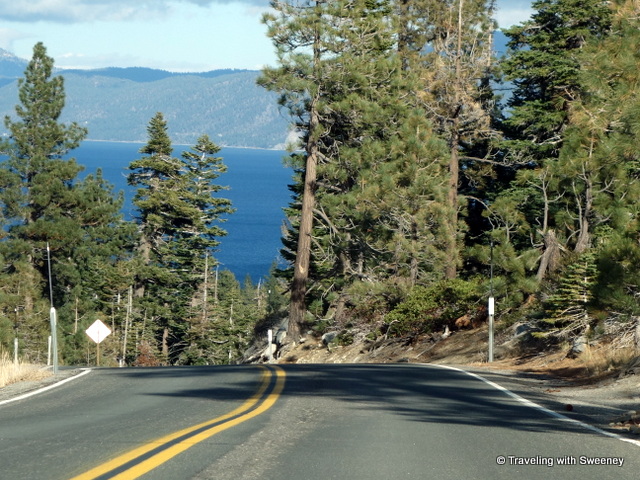 My first spa treatment ever at Tahoe Lakeshore Lodge and Spa was a highlight of our short and busy stay. 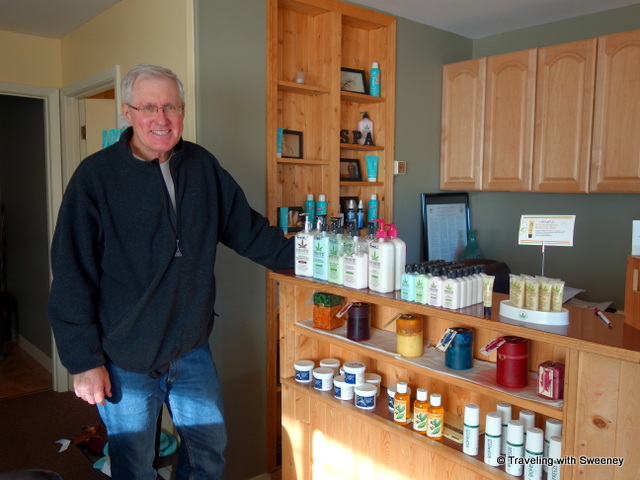 Arriving for my first-ever spa treatment at Elements Spa

Sweeney has tried to get me to join her in spa treatments during our many trips but I previously had no interest. I guess I don’t like to sit in one place for too long, particularly with someone attending to me. To add background, I’ve chosen the person who cuts my hair not because of the end result but because she does it the fastest. I’m not sure what changed my mind this time. Perhaps it was just to try something new or because I’d had a busy, tiring few months and had a few extra aches and pains. So the idea of doing something relaxing seemed to fit. Not only am I glad that I made this decision but now regret that I had been so foolish to turn down opportunities so many times before. This proved to be a very good choice for my initiation. The facility was just right, not pretentious – more casual and relaxed. I liked the idea that it would be a couple’s massage; Sweeney would be there to help me avoid any breaches of spa-treatment etiquette.

Our two masseuses met us in the lobby and walked us to a couples massage room, nicely appointed with calming scents and sounds. Very soon, I was deeply relaxed and into my own thoughts. The masseuse, Casey, was friendly and her technique was very firm. I was amazed at her endurance; I know my hands would have been tired after 10 minutes, let alone an hour. Sweeney was also very pleased with her massage by Angela.

It would have been nice to relax afterward because second to how much I enjoyed the massage, was my surprise at how relaxed, limp, and virtually drained it left me. But our agenda was so tight that afterwards we only had time to check-in before rushing to our dinner reservation. 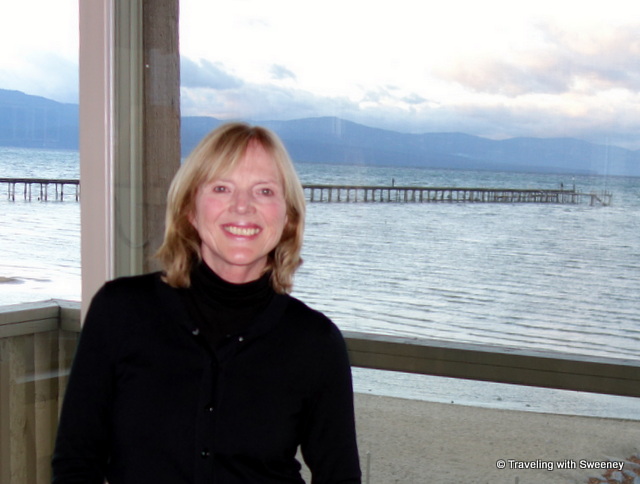 Directly on the south shore of the lake and convenient to area restaurants and nightlife, Tahoe Lakeshore Lodge & Spa has an ideal location. Our Corner View Room was spacious (with a full kitchen) and yet cozy with a fireplace, and it had an awesome lake view. 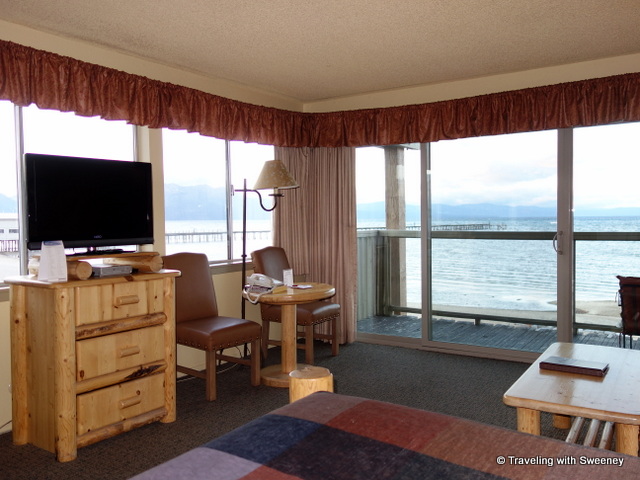 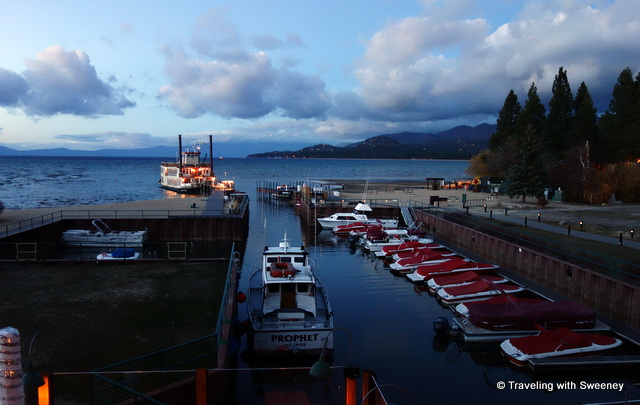 Dining with a view at Riva Grill

Our dinner at Riva Grill (just a short drive from the lodge) afforded more lovely views of the lake as we enjoyed a delicious meal. 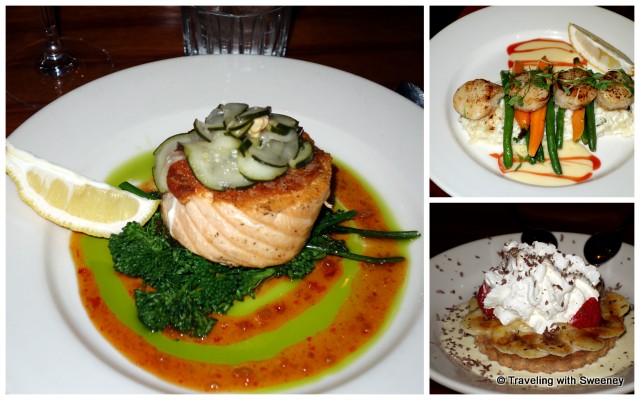 Sweeney and I shared the House Salad which we were still raving about the next day — fresh spring greens with roasted red pepper vinaigrette, feta cheese and sugar crisp walnuts.

It was Pan-seared Wild King Salmon for me and Seared Diver Scallops for Sweeney. Thumbs up from both of us on our entrees. The Banana Cream Pie was unlike any other I’ve had, especially because of the graham cracker shortbread crust.

But our night wasn’t over yet.

Take in a show

There was more in store continuing a short way down Lake Tahoe Boulevard across the state line to the aptly named, Stateline, Nevada, for a show at Harrah’s Lake Tahoe. 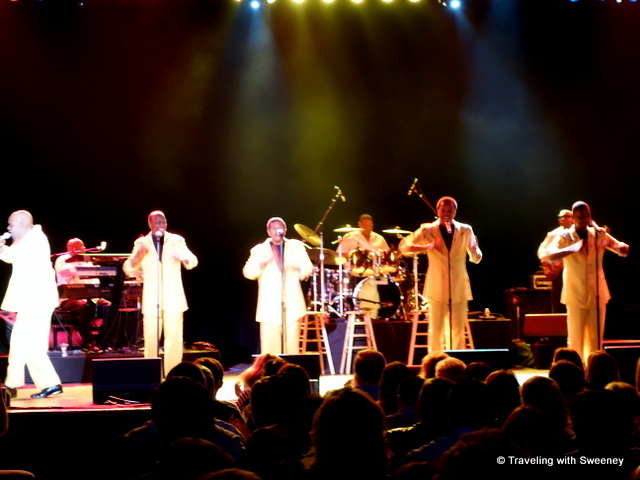 Harrah’s, a big name in hotels and casinos, has a lot going on for everyone. Although we typically enjoy a bit of gambling on the slot machines or roulette table, this time we passed them right by to get to our show venue, the South Shore Room.

It was a good theater for a show; all the seats appeared to provide a good vantage and there was a small service bar on either side of the room. Our tickets were for The Spinners, the popular 1970s group that is a favorite of Sweeney’s. She especially loves the song “I’ll Be Around”. One of the group, Henry Fambrough, is an original member and was key in getting the current group together. Another member is the son of an original Spinner. I really enjoyed the show though Sweeney was far more familiar with the group. She says they sounded as good as ever. I was surprised at the number of hits they had and the notable talent of the performers – their voices were amazing and their showmanship and dancing was impressive. It was a very entertaining performance even if you never heard of the group or any of their songs.

And then it was time to call it a night and head back to the lodge, where we awoke to this serene sunrise view. 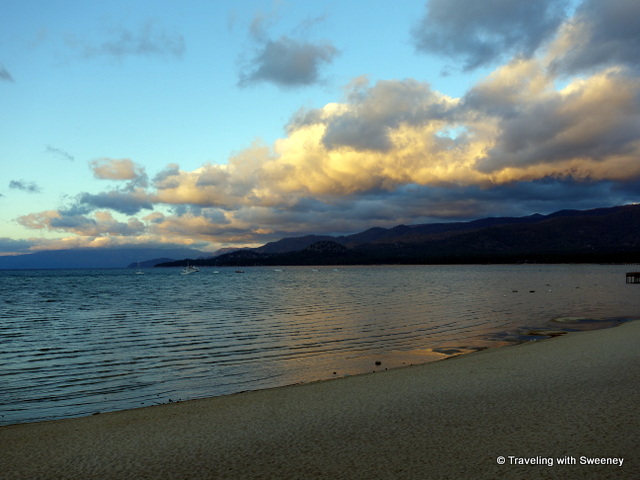 Head for the hills

These are the highlights from the second part of our getaway weekend at South Lake Tahoe. It was time to keep heading west for the next stop of our 3-day getaway, but not before stopping for breakfast at the Getaway Café. It’s in a lovely wooded setting outside of town with a cozy ambiance and great American, Italian, and Mexican dishes. We eagerly devoured omelets and French Toast. 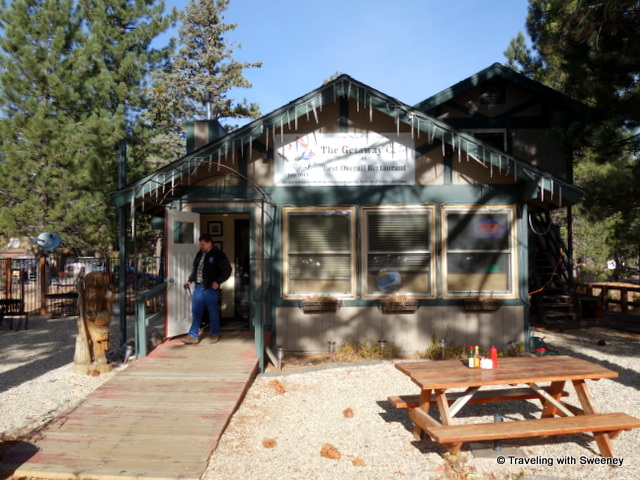 Then we were on our way across the Sierra Nevada to El Dorado County — an area that was full of surprises for Sweeney and me. Stay tuned. 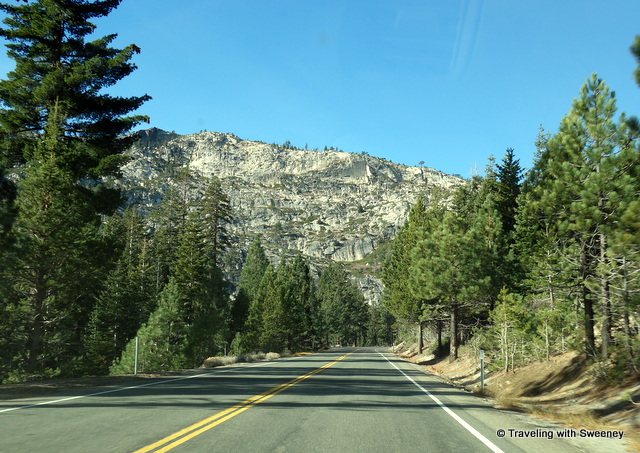 Our thanks to the Lake Tahoe Visitors Authority for hosting our South Lake Tahoe experience.

I Left My Heart in Northern California
Note: This post may contain affiliate links. If you make a purchase through these links, I will earn a commission at no extra cost to you. Thanks!