Now I can say that truthfully.

Yee-haw! I happened to be in Houston during the annual Houston Livestock Show and Rodeo (RodeoHouston) last week, so I made it a priority to experience my first rodeo. 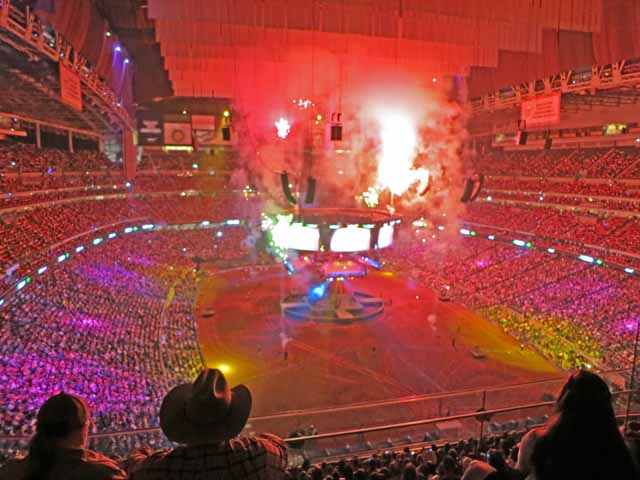 Cowboys and Fireworks at RodeoHouston

Whenever I’ve imagined a rodeo, I’ve thought of a dusty, small town arena surrounded by a weather-beaten wooden fence and parking lot full of pickups with local cowboys riding in the show. Held in the huge Reliant Stadium, with top competitors and ending the night with performances by famous country music stars, RodeoHouston is a totally different experience. (But it’s still very dusty.) So with eager anticipation and a couple of cold beers, Mr. TWS and I sat in the nosebleed seats and watched a fast-paced series of rodeo competitions. 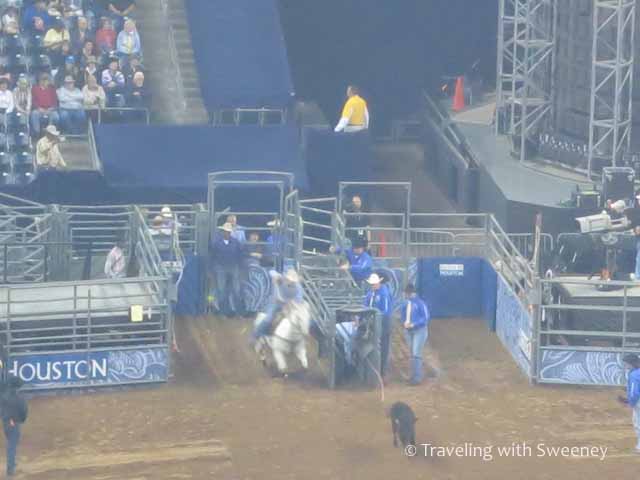 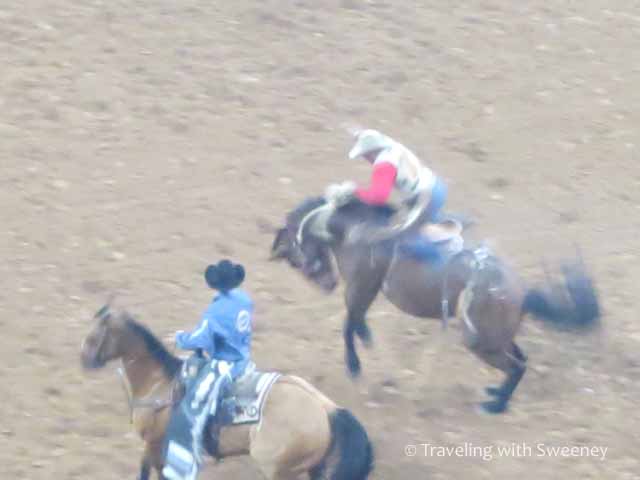 Most people are familiar with the saddle bronc riding event where the object of the cowboy is to stay on a bucking horse that is trying to throw him off. I always thought it was called a bucking bronco event, but I’m not a cowgirl. Next up was Steer Wrestling and then … 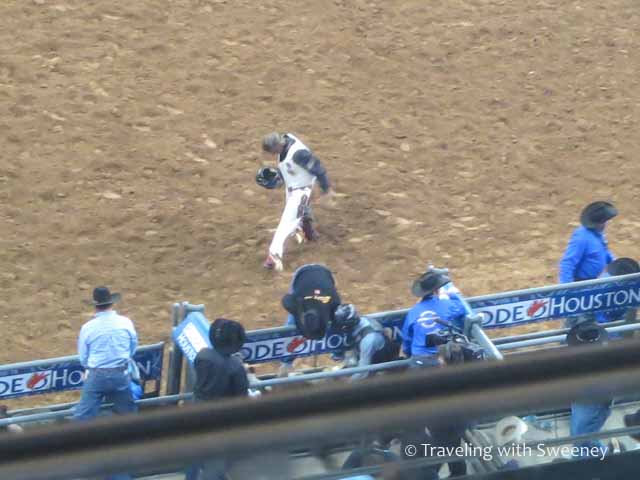 Thrown from the bull

It seems to me that all of these rodeo cowboys take some risks with their physical well-being, but riding a bull looks like a really dangerous occupation. The bull rider’s goal is to get an eight second ride before getting thrown. This cowboy had just had his short time on the bull. In this case, the bull was easily enticed back into the pen, but others wanted to chase the rider and rodeo clown around a bit. 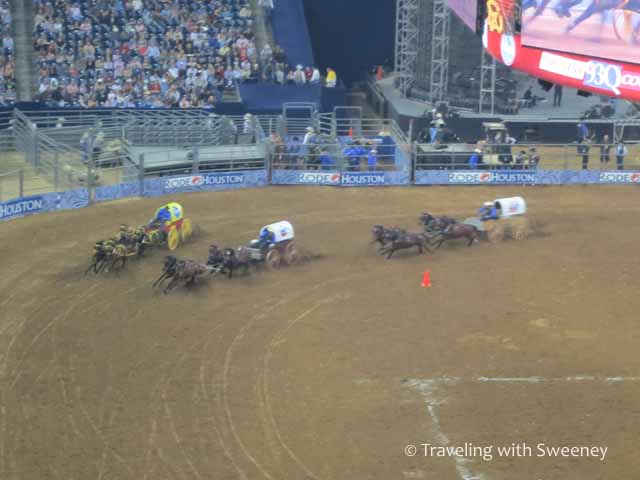 I liked the fast and fun chuck wagon races where you hear the pounding of the horses’ hooves as they maneuver tight turns around the track. 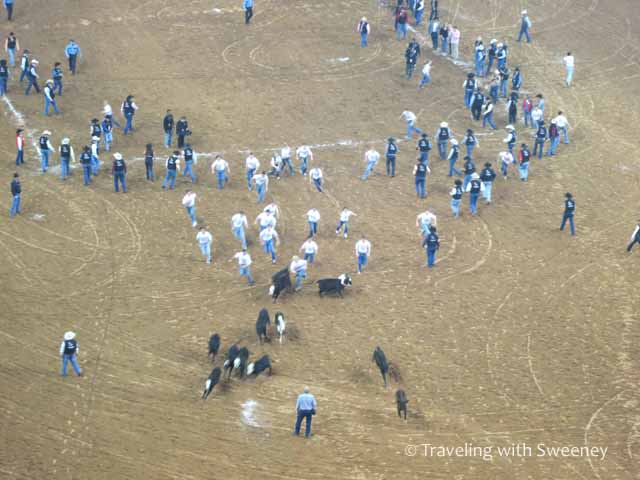 Good question. It just looks like a lot of kids and calves running amok, doesn’t it? We had a few good laughs watching this event as Texas 4-H and FFA (Future Farmers of America) members were trying to catch uncooperative calves in the Calf Scramble. It wasn’t clear what the rules or strategies were — or if there even are any. It ended when all the calves had been downed, roped and pulled back to the center.

There was another kids events called mutton bustin’ where 5 and 6 year olds see who can ride a lamb the longest.

My First Rodeo and My First Country Music Show 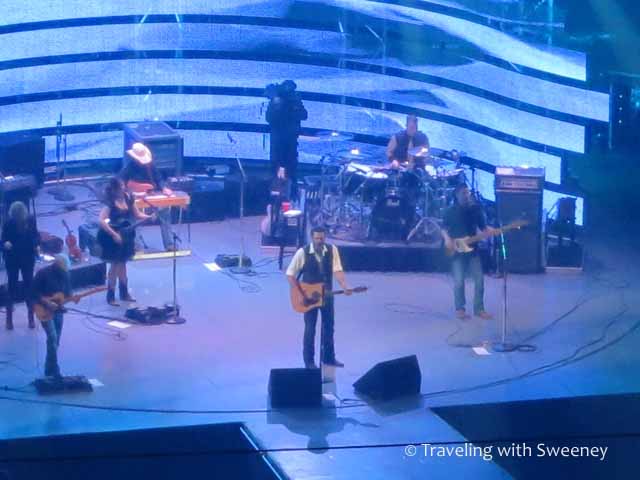 After the rodeo events, a performance by country star, Blake Shelton, followed. Country isn’t my favorite genre of music, but live concerts are always exciting and Blake puts on a good show. There was lots of energy on the rotating stage and in the audience.

Food vendors at RodeoHouston are well-known for serving up hefty portions of beef, ribs, and turkey legs.

Cooking up sirloin at the Texas Skillet

But if that’s not your thing 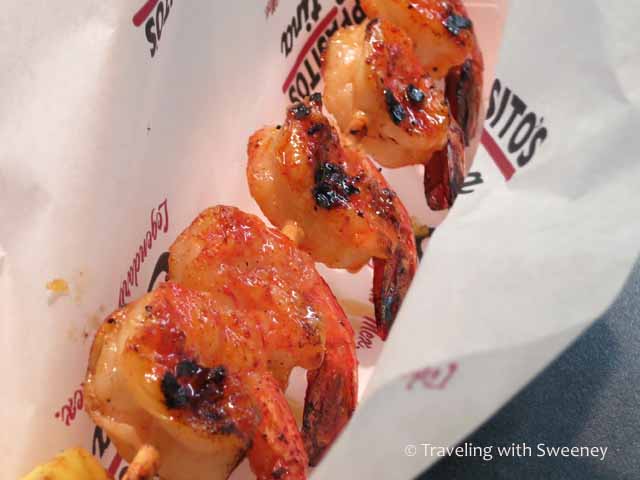 Word of warning — if you’ve got a hankering for BBQ ribs, don’t wait to get them at the end of the night. I got the last slab at a booth that was getting ready to close. The ribs were meaty, but lukewarm and rather disappointing. 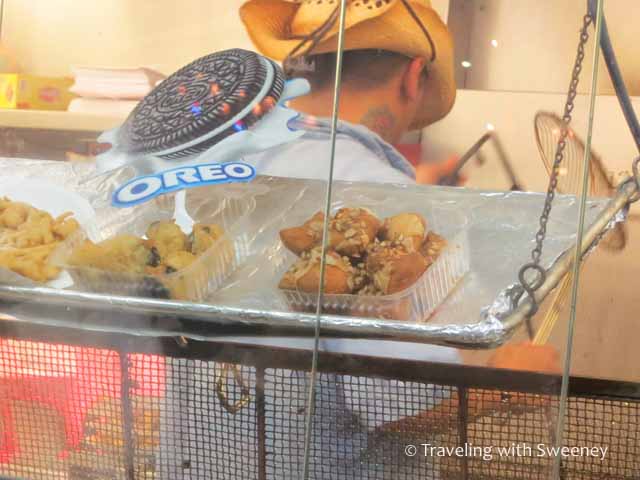 I’d heard a lot about the fried dessert options I’d find at the rodeo. My choice was fried Oreos. It doesn’t sound good, does it? You get a bag of about 6 of them all covered in powdered sugar, much of which ended up on my black sweater. I thought that they would be made like a fried chicken crust around the cookie, but it’s fried in beignet batter, making it more like a small beignet with a melted Oreo inside. They are delicious!

The grounds surrounding the building were filled with food vendors, game booths, and carnival rides. I’m not one for going on a lot of rides, especially those that spin in endless circles, I certainly wasn’t going to do it after indulging in fried Oreos and a couple of beers.

The Houston Livestock Show and Rodeo ends on March 18th.

Can you honestly say, “This isn’t my first rodeo”?

Or is a rodeo just not your kind of thing?

46 thoughts on “This Isn’t My First Rodeo”