When you arrive in Dublin by plane, you see the bright green billboards promoting The Gathering as you walk through the terminal. The slogans are enticing and welcoming —  “Everyone’s invited” and “Excited to get you home”. But what exactly is The Gathering? 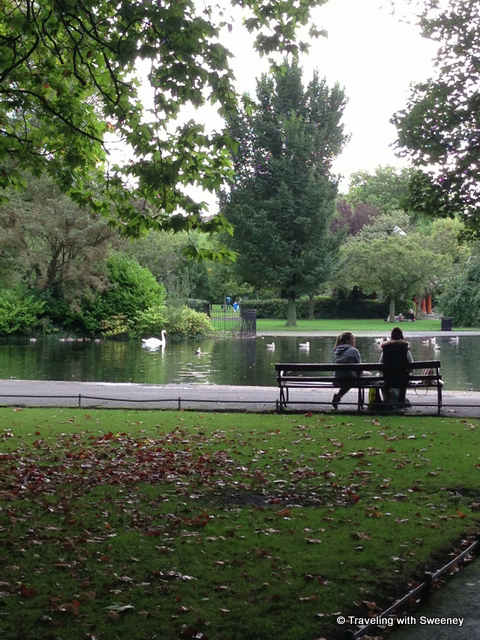 The Gathering Ireland 2013 is a program launched last New Year’s Eve in Dublin to encourage Irish friends and family around the world to visit this beautiful country and experience its vibrant culture. Throughout 2013, gatherings from large public events to small family reunions are being celebrated and showcased via The Gathering website and other media outlets. It’s a “welcome home” campaign — whether you’ve lived in Ireland, have Irish roots, or just have a love of the Irish spirit. 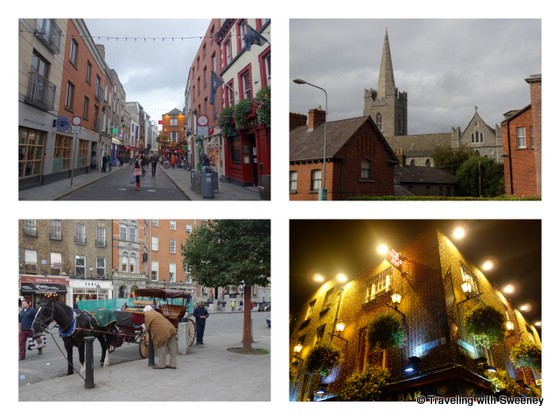 A few scenes of Dublin

My father was 100% Irish, but I wasn’t in Dublin for a family gathering. I was there to attend another sort of gathering  – with my fellow travel bloggers and travel industry sponsors at TBEX Dublin, where bloggers from around the world were convening for education, entertainment and networking. The conference gave me my extra incentive to visit the land of my paternal ancestors, a return trip I’ve been longing for since Mr. TWS and I visited in 2004.  This recent trip was only for a few days, but I relished it all — making new friends, visiting sites old and new, indulging in Irish food and drink, and enjoying Irish music while luxuriating in the comfort of the Four Seasons Hotel Dublin as my home base.

Update 2/3/2015: Please note that as of December 31, 2014, this hotel is no longer managed by Four Seasons Hotels and Resorts. The hotel is now operated as InterContinental Dublin. My opinions and perspectives are based upon my experience with the hotel under the management of the Four Seasons.

The Irish have a saying that truly represents the hospitable nature of the people — Céad míle fáilte, meaning “A thousand welcomes”.  That’s exactly the kind of welcome I got checking into the Four Seasons Dublin for my stay during TBEX Dublin. 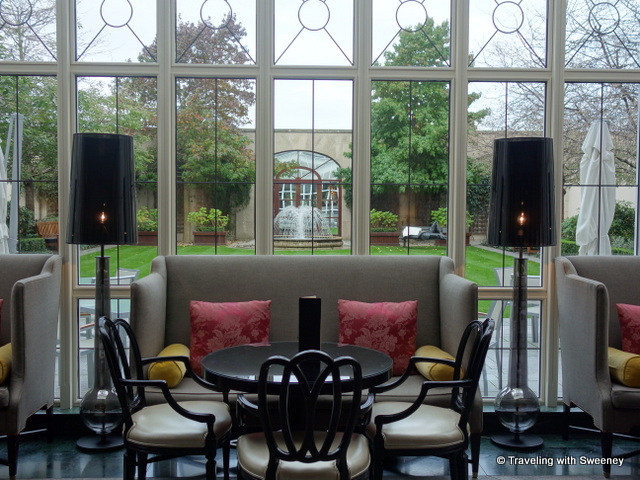 Lobby Lounge with view of the courtyard

Located on quiet Simmonscourt Road in Ballsbridge, an upscale residential area of the city, the hotel has warm, inviting décor and helpful, smiling staff accompanied with first-class service and luxury accommodations. Rory, who greeted me at the front desk, escorted me to my Deluxe Suite while we chatted about traveling and he offered his assistance with local information. 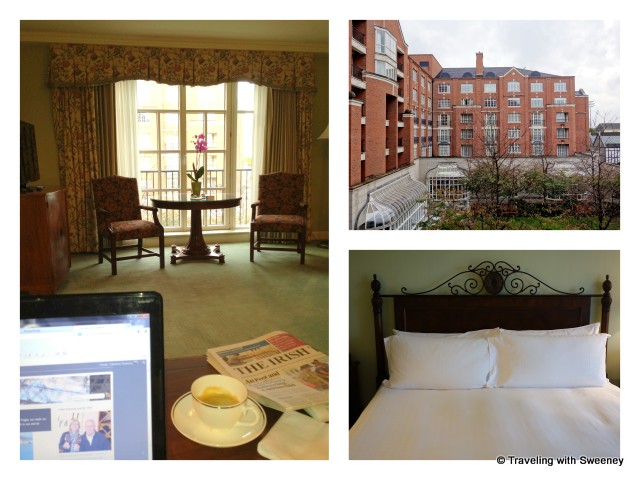 With the Four Seasons fine touches, I enjoyed some time catching up on business at my desk while nibbling on caramel corn and nuts, appreciating the quiet, relaxing atmosphere after a busy travel blog project and a day of travel from Bologna, Italy.

In my experience, the enjoyment of a business conference can be directly affected by the quality of one’s accommodations. The Four Seasons Hotel Dublin was ideal for me and it was a convenient 5 – 10 minute taxi ride (depending upon traffic) to the conference center, certainly in walking distance when weather and time permits.

A light rain was falling and autumn leaves were rustling on the tree branches above me as I took a late afternoon walk in the hotel courtyard with camera and umbrella in hand.  I loved breathing in the refreshing and misty air. 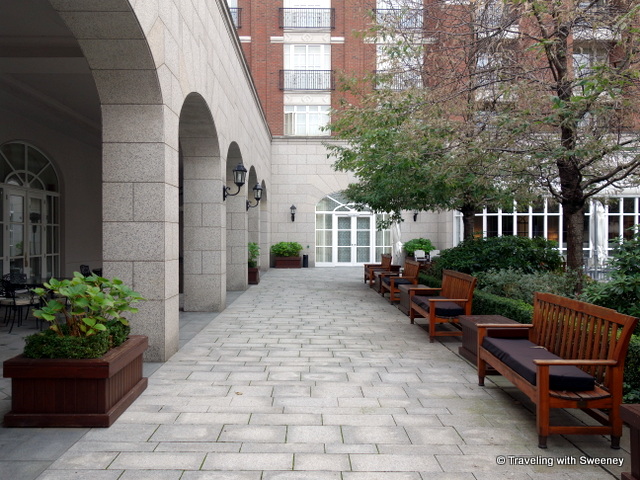 Starting the day at Seasons restaurant 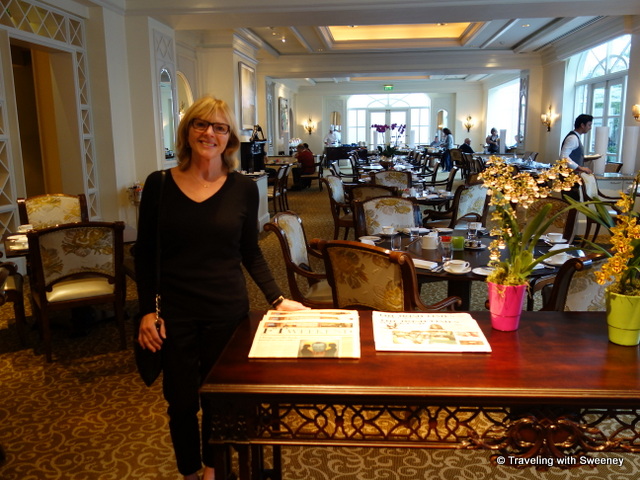 The full Irish breakfast and friendly service of staff (such as Reka seen in the photo below) in a lovely light-filled room looking out on the courtyard made Seasons restaurant a great place to start my day. 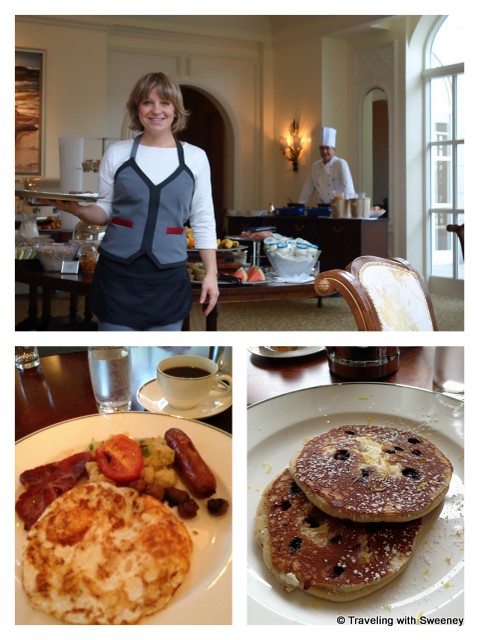 The dishes served in Seasons restaurant are created with locally sourced produce, meats and seafood from specially selected  butchers, artisans and growers.

Out and about in Dublin

There was no shortage of entertainment provided by the conference sponsors — opening night party at the Guinness Storehouse, cocktails at the stylish Odeon bar ( located in the former Harcourt Street railway station),  and tickets to the premier of Heartbeat of Home, a wonderful music and dance performance by the producers of Riverdance fame. 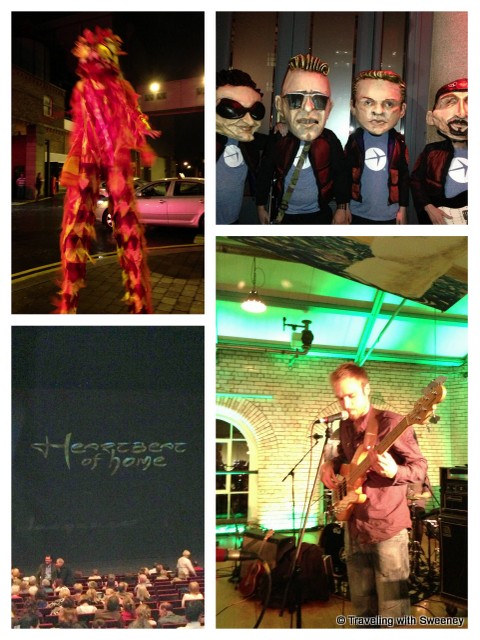 From top left: Guinness Storehouse performers, U2 characters at the Odeon, Come On Live Long band at Guinness, and Bord Bais Energy Theatre

A short taxi ride to the conference facilities and other venues gave me an opportunity to speak with the drivers who I found to be quick with smiles and the craic (Irish term for fun conversation and banter). They seemed to enjoy sharing their perspectives and helpful tips. As evidenced during one of my taxi rides, the Irish are very serious about political issues and  exercising their voting rights. On my way to the conference with a companion, the driver was telling us about a vote taking place on a referendum that day and he shared his viewpoints. His eagerness to place his vote and have his voice heard was inspiring. While having chats with this gentleman as well as other drivers during my stay, I found that the rides seemed short and I often wished I could spend more time learning about the Irish and enjoying the conversation.

The time at TBEX events, restaurants, the theater and just strolling around Dublin was great, but it was nice to end the busy days in luxurious comfort — perhaps with a little hot tea and peanut brittle or pizza and wine from room service. 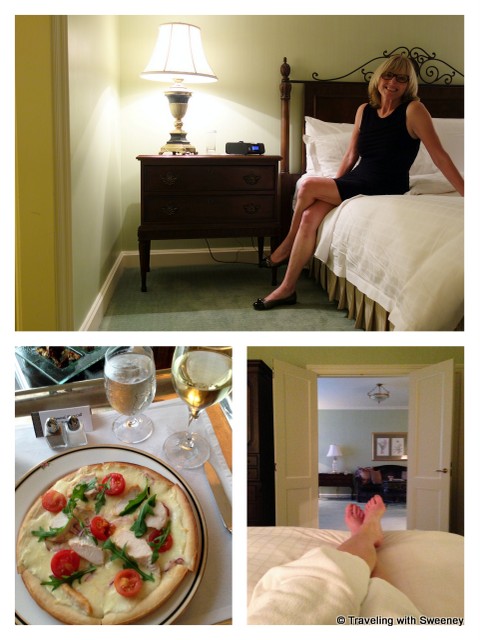 Touches of art and flowers are tastefully displayed throughout the hotel. 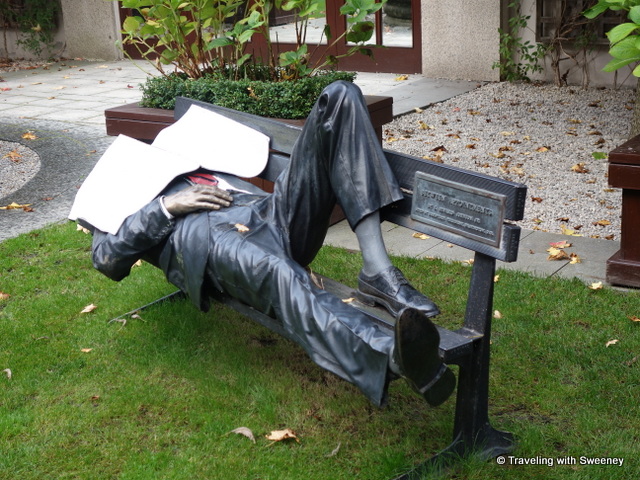 I loved this lifelike sculpture I came across in the courtyard. In keeping with the intent of the sculptor, Between Appointments took me by surprise and made me smile. I recognized the name of the artist, J. Seward Johnson with whose work I was familiar. You may have seen my post about a large piece of his public art that I also came about by surprise in National Harbor, Maryland called The Awakening which evokes a much different reaction than this more ordinary scene in the courtyard.

In keeping with the hotel’s artistic flair, an art exhibition of Irish sculpture will be presented throughout the hotel from November 5, 2013 until January 2014 and the art will be available for purchase. There are sneak peeks of the exhibition at Sculpture In Context At Four Seasons Hotel Dublin.

The hotel’s florist, Catherine Forrest does a wonderful job with the arrangements from the Flower Room such as the exceptional orchid that was in my room, the colorful carnation bouquets in the lobby lounge, and the single white rose on my breakfast table. 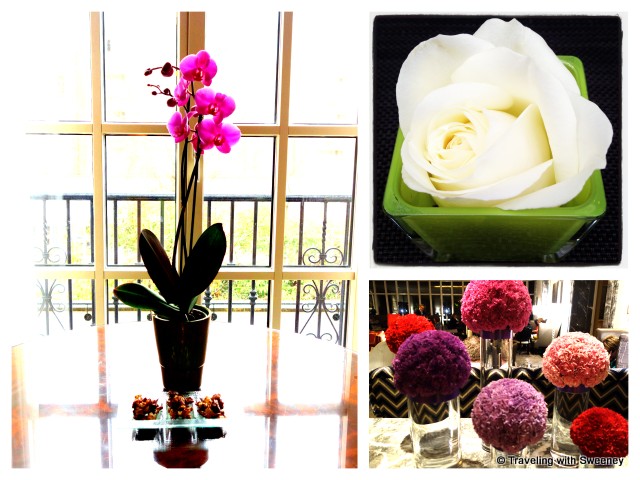 From the Flower Room at the Four Seasons Dublin

When I think of those few short days, the most vivid memories are of the warmth, hospitality, smiles and vibrant spirit of the people I met. 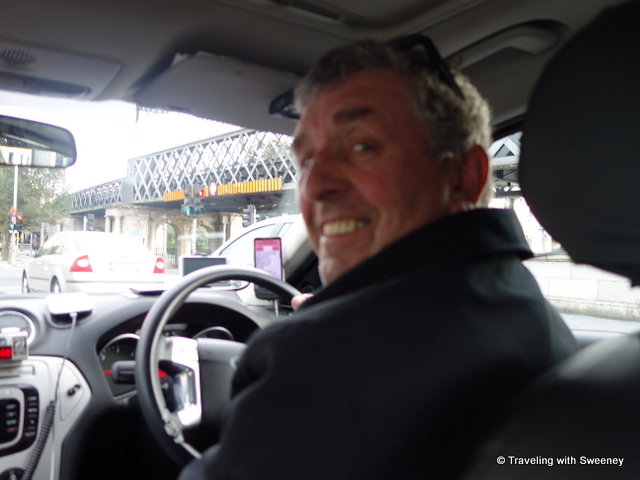 On the way to the airport — going home

During the taxi ride to the airport, my driver and I talked about many subjects, including the lifelong friends he had made on a visit to New York City many years ago. We talked about the late Irish journalist Veronica Guerin, who is a hero in Ireland for her part in bringing to justice the drug lords of Dublin, at the cost of her life. We also talked about the negotiations to end “the Troubles”, the violence in Northern Ireland that had continued for decades. George put it very simply — the government and politicians put the agreements into place, but it was the people themselves who made the difference by presenting a strong public front to say that they weren’t going to stand for the violence any longer.

I mentioned that I was impressed that in these days of economic struggles in Ireland, the people seem to have such positive outlooks. He said, “Oh, we’ll always keep smiling. You have to be optimistic!”

I’m optimistic about more opportunities to return to Dublin.

Disclosure: My accommodations in Dublin were hosted by Four Seasons Hotel Dublin.

28 thoughts on “Home for the Gathering in Dublin”