Four days, ten things to do in Valencia

What can you do in Valencia in four days on a first visit? Mr. TWS and I found that we could get a wonderful glimpse of this city, Spain’s third largest, on the Costa Blanca. Valencia was the first stop on our recent Spain trip and we quickly decided it’s a place we want to return to sometime. It’s a welcoming and very livable city with plenty of cultural features, great food, recreational activities, lovely parks, and (especially appealing to Mr. TWS) beautiful beaches. Besides seeing landmarks and major sites, we enjoyed just walking around and feeling Valencia’s Mediterranean vibe.

Top things to do — Valencia highlights

Based on our short trip, we’ve got these recommendations for top things to do in Valencia — in no particular order.

Like all of the cathedrals of Europe we’ve visited (and there are many), Valencia Cathedral is a bit overwhelming with ornate decorations, plentiful statues, frescoes, art, relics, and symbolism. The various architectural styles of the cathedral (Baroque, Gothic, and Romanesque), its numerous chapels, and its magnificent altarpieces make it worth a visit. And there’s the history. Before the building of the cathedral began in 1262, the site had been home to a mosque, Visigoth cathedral and a Roman temple. The cathedral is also one of several other locations in the world that claim to have the Holy Grail. In the cathedral, it’s said to be housed in one of the chapels, the Capilla del Santo Caliz. 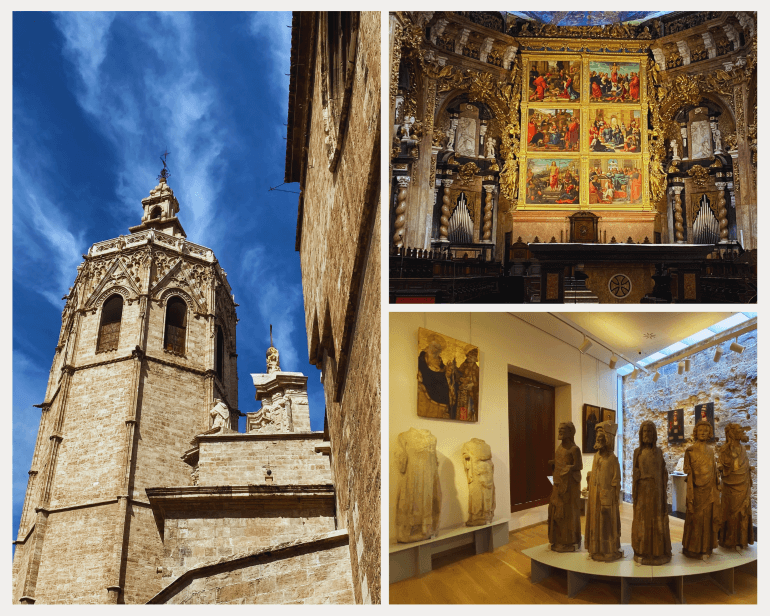 We also recommend a visit to the cathedral’s museum with an impressive collection of religious art and artifacts. Very interesting to note that during restoration of the museum roman ruins were found and you can take a walkway to see some of them. 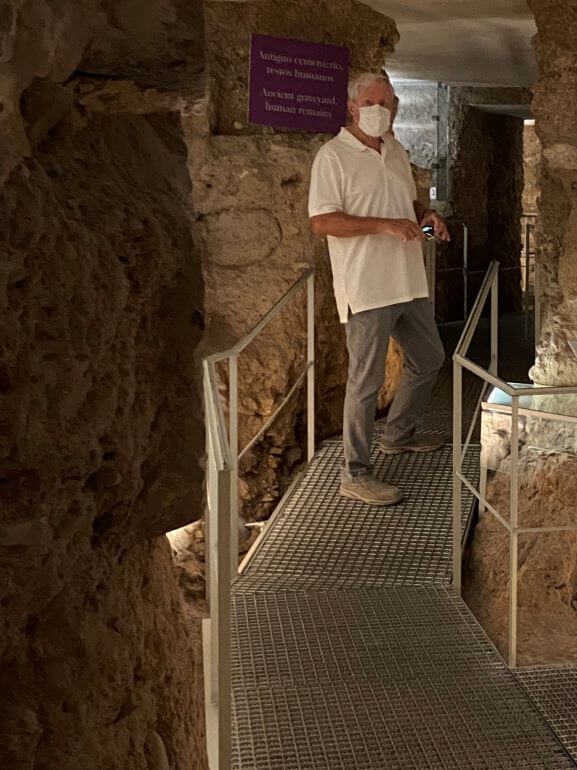 Mr. TWS walking among the Roman ruins at Valencia Cathedral

“Built between 1482 and 1533, this group of buildings was originally used for trading in silk (hence its name, the Silk Exchange) and it has always been a centre for commerce. It is a masterpiece of late Gothic architecture. The grandiose Sala de Contratación (Contract or Trading Hall), in particular, illustrates the power and wealth of a major Mediterranean mercantile city in the 15th and 16th centuries.” — UNESCO 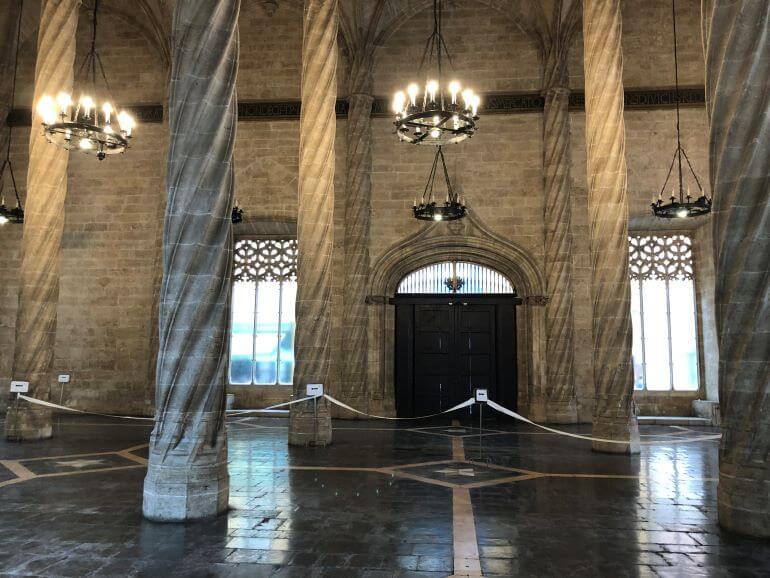 There are many architectural features in La Longa de la Sada such as beautiful coffered and vaulted ceilings, spiraled columns, a black marble floor, and gargoyles on the exterior. Common in Valencia, you’ll also find orange trees in the aptly-named courtyard, Patio de los Naranjos (Courtyard of the Orange Trees). 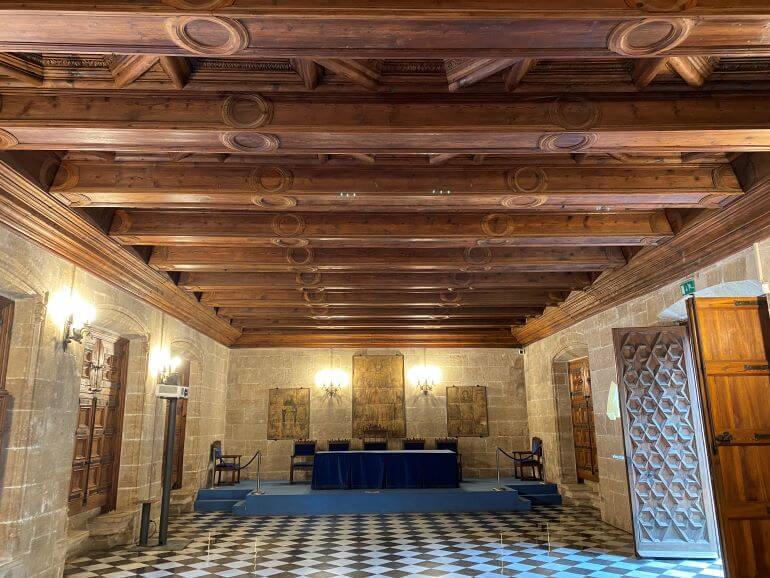 The Museo de Bellas Artes has over 2,000 works of significant Spanish painters like El Greco, Francisco de Goya, and Joaquin Sorolla in several first-class galleries. The museum is located adjacent to the Jardin del Turia in a 17th century building which was once the San Pio V Seminary College, but now has a quite modern interior.  A large part of the collection consists of religious art and altarpieces of the 14th – 17th centuries as well as regional Valencian art. 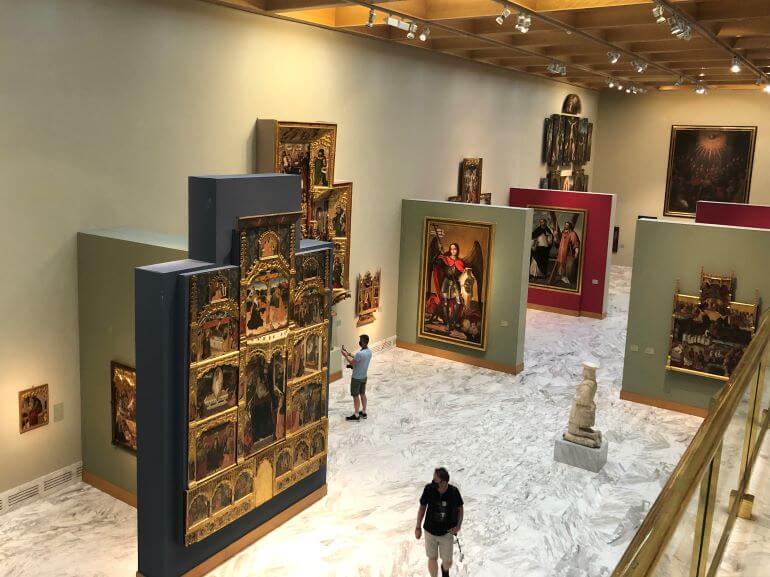 Valencia’s central market is Europe’s largest covered market and has an incredibly broad selection of produce, seafood, meat, sweets, nuts, and more. It was bustling with locals and tourists when we visited. The rows of vendors selling fresh seafood is particularly impressive and enticing for fish lovers like Mr. TWS. For me, not so much. 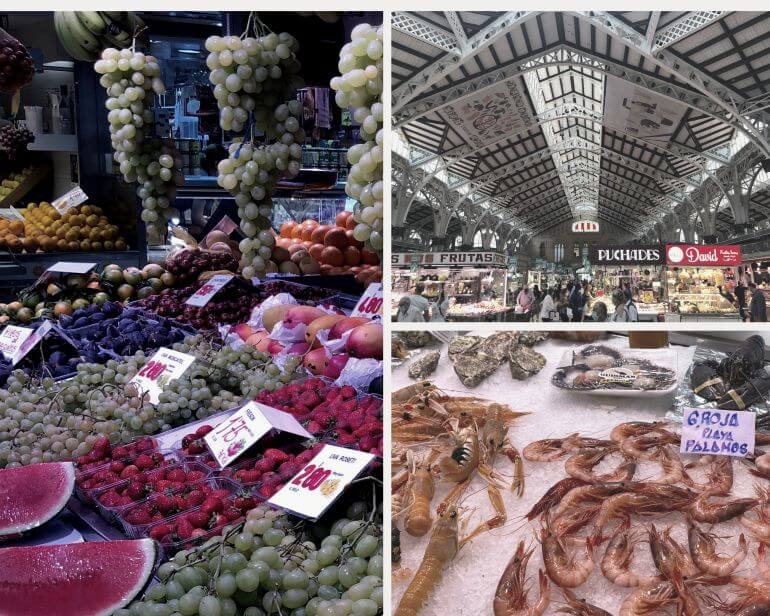 Mr. TWS loves the water. If there is a way for him to take a swim in a lake, river, or ocean when we travel, it is a highlight of the trip — as it was for our time in Valencia on the Mediterranean. He enjoyed a swim at the very wide and deep Las Arenas Beach, easily accessed (in our case, by taxi) from the city center. I didn’t go into the water (about 77°F), cold by our Scottsdale, Arizona pool standards, but did enjoy the beach experience and walking along the promenade with many bars and restaurants. 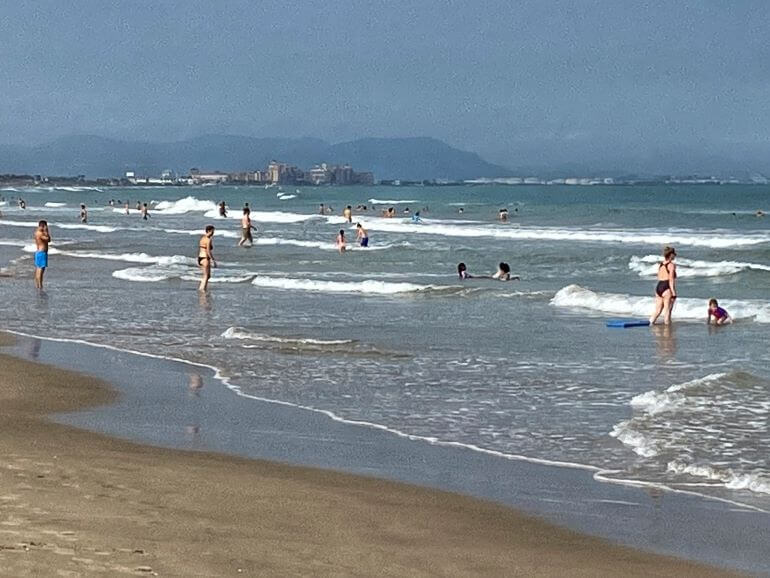 The old districts of European cities are among my favorite places to walk around when I travel. From the Calle de Guillem de Castro we walked through the archway of the 15th century Torres de Quart, part of the old city wall, to enter the Barrio del Carmen, the oldest neighborhood in Valencia’s historic center. Those gouges in the walls were made by French cannons during the Peninsular War of the early 1800s. 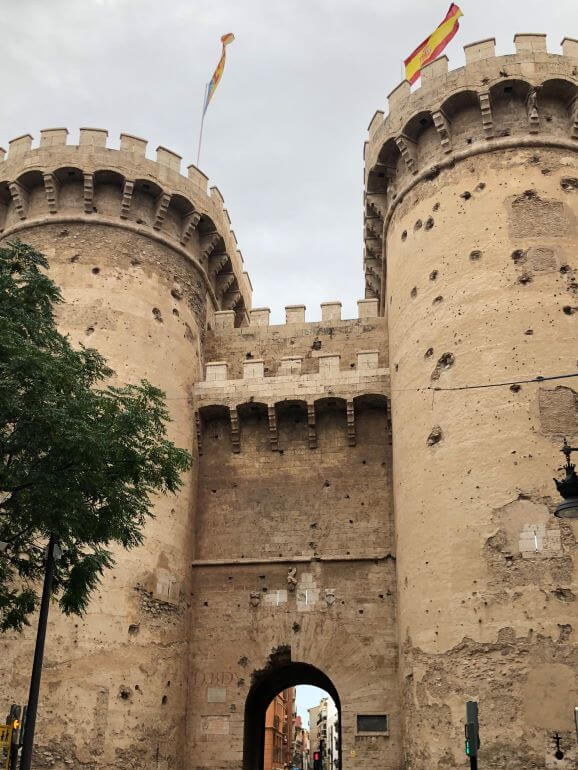 We enjoyed a quiet stroll through the area during the day, but we’re told that the district really comes alive at night when the bars and clubs open. 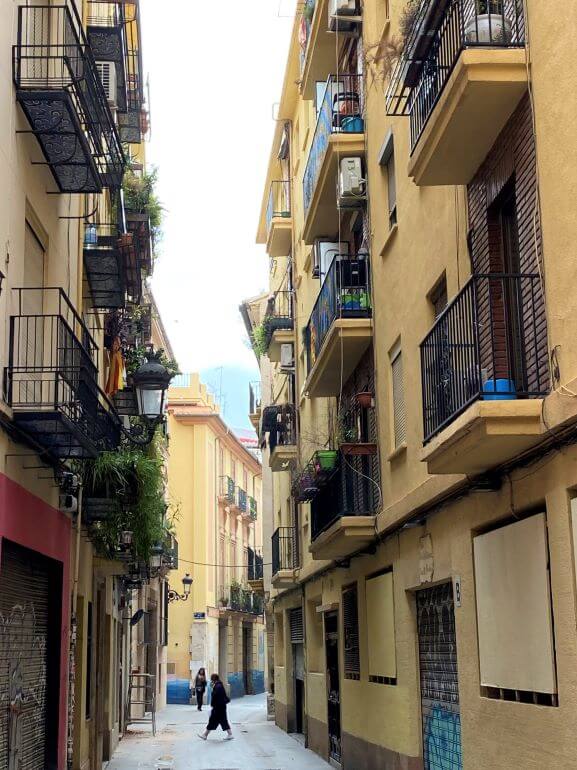 The Church of San Nicolás de Bari and San Pedro Mártir is tucked away along a street in the Barrio del Carmen. It’s known as Valencia’s “Sistine Chapel” because of the spectacular frescos uncovered during renovations. 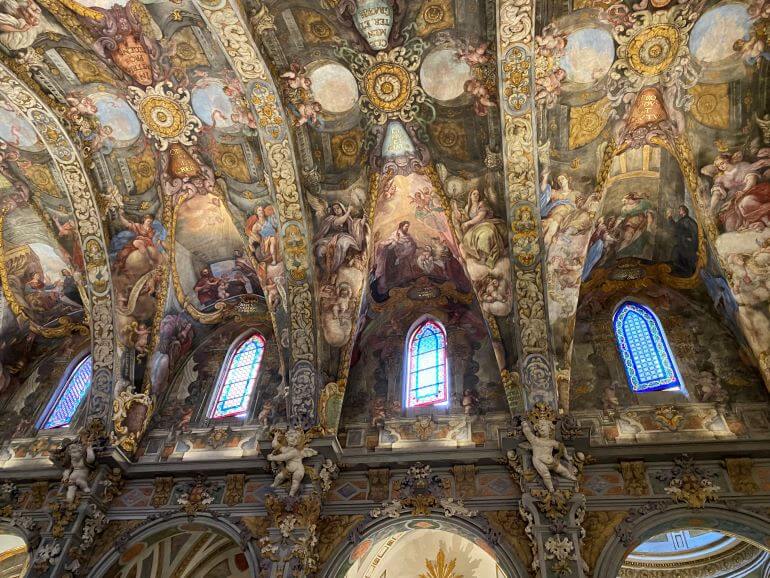 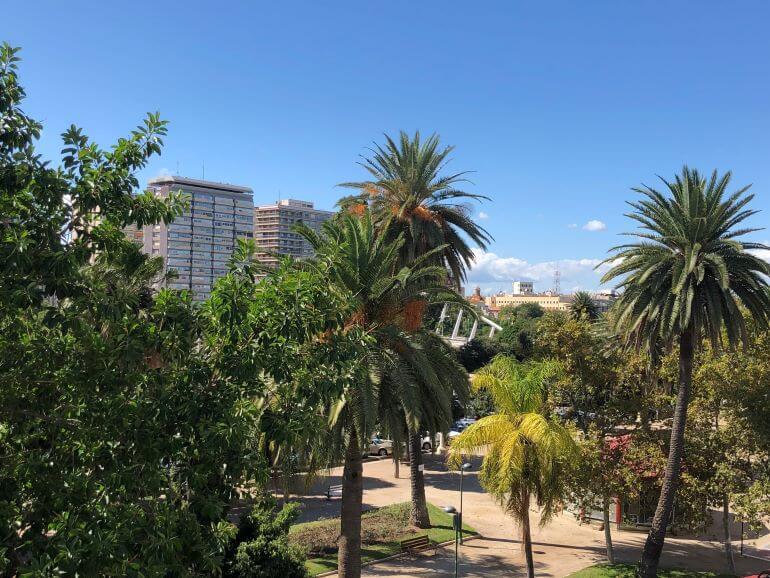 We loved walking through (and often along) this gorgeous park at every opportunity. The park was created on the former riverbed of the Turia River which was diverted in 1957 to prevent more flooding. Now there are gardens and tree-lined paths for walkers, joggers and cyclists. Even at the end of September, there were many blooms to enjoy as we walked. 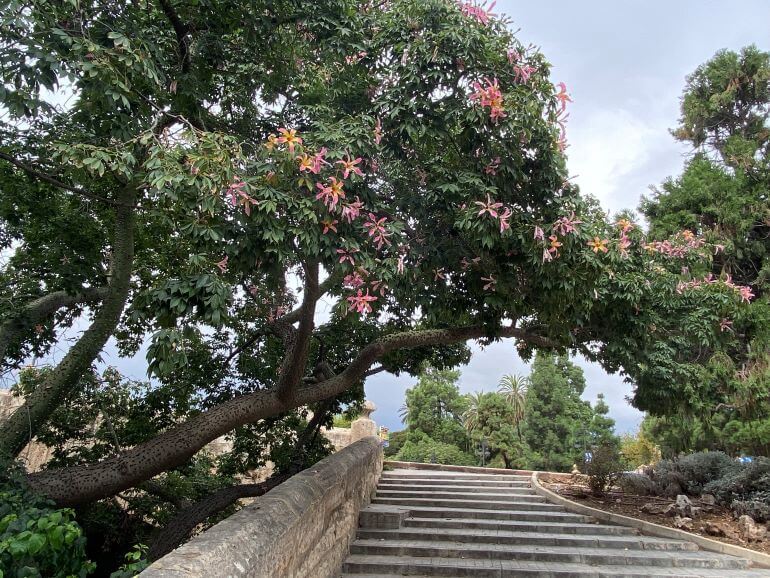 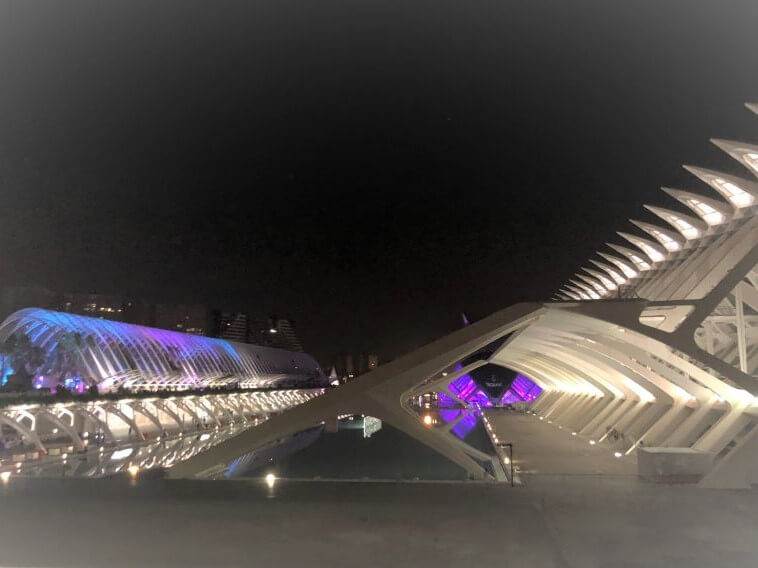 Although we didn’t actually have time to visit this major attraction of Valencia, we made a point to go by one evening to see its striking design and lights. The photo above shows just a small part of the multi-building complex to give you an idea of the beauty of architect Santiago Calatrava’s design. (Calatrava is also known for other key works such as the Milwaukee Art Museum.) The City of Arts and Sciences has several specific and multi-purpose venues including Europe’s largest aquarium, a planetarium,  an opera house, and a nightclub in its seven buildings.

Relax in the plazas

Plaza del Ayuntamiento is a major plaza of the city named for the town hall (ayuntamiento in Spanish). It is a lovely place to relax around the fountain and palms while taking in the neo-classical architecture of the city’s main post office and other buildings surrounding it. 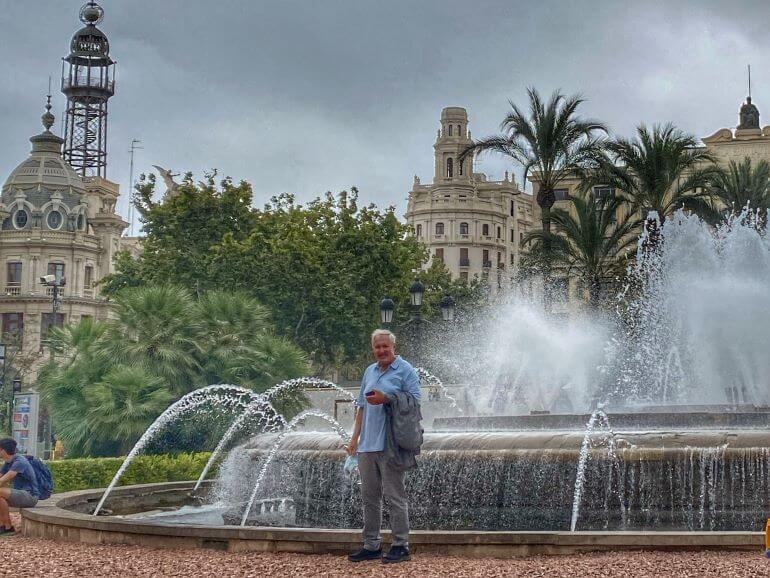 Another of the many appealing plazas of Valencia is Plaza de la Virgen, located near Valencia Cathedral. The Basilica de la Virgen de los Desamparados is the pink church in the photo. It’s a nice place to take a break at an outside café during a day of sightseeing. 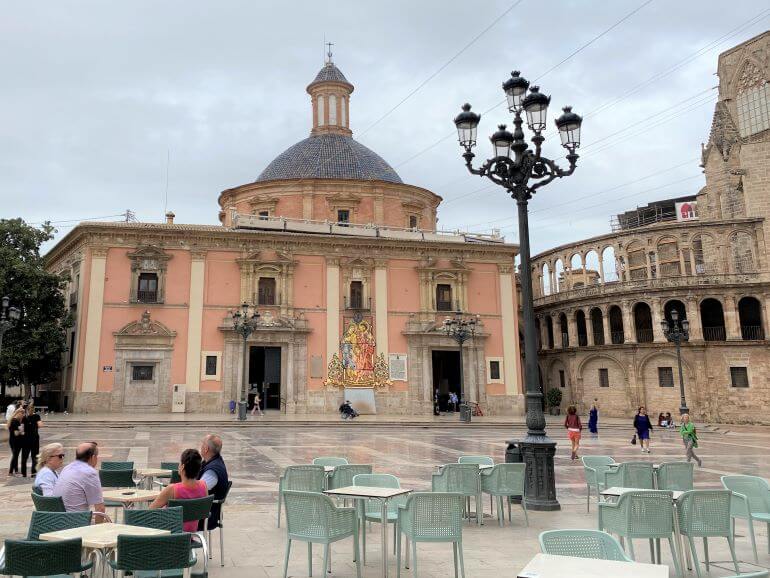 Paella tip: Valencia is where paella originated so make sure you enjoy it at least once while you’re there. La Algeria de la Huerta, a restaurant on Malvarrosa Beach, was highly recommended to us by locals, but we were too late trying to get reservations for lunch. However, we did have a delicious lobster paella in a lovely marina setting at Azul Sunset Point at Marina Real Juan Carlos I. The Sunday vibe hanging out with the locals at the marina was quite enjoyable, but next time we’ll get reservations early for La Algeria de la Huerta since it was so highly regarded. 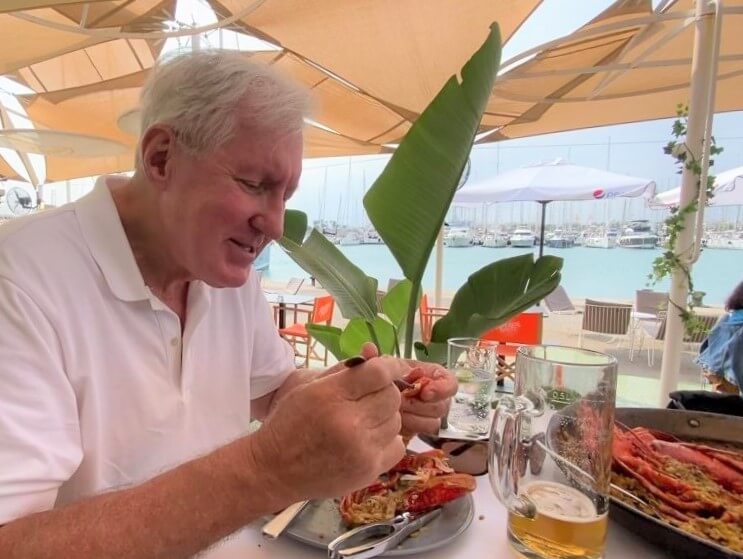 “I didn’t expect to see this” tip: On our first day of sightseeing, we came across Jardins de la Glorieta, a small park with sculptures, benches, and this enormous 200 year old Ficus tree (shown below). There’s a plaque on the tree designating it as a “monumental tree”. Monumental, indeed! Look for it when you’re in this area of central Valencia. 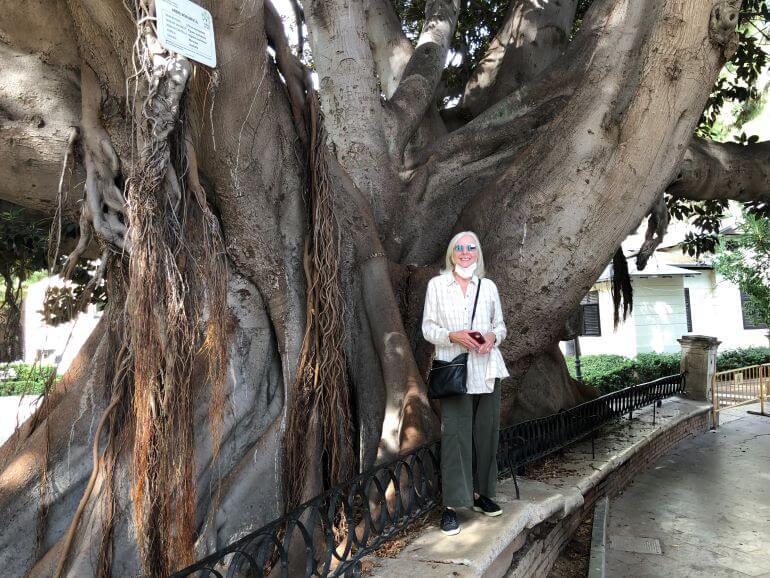 Romance tip: Embrace the romance of Valencia. Maybe it was the balmy weather, tree-lined boulevards, the Mediterranean vibe, and our lovely hotel (Hotel Hospes Palau de la Mar) that made Valencia feel so romantic to us, especially since we were still celebrating our 30th wedding anniversary. Panorama Restaurant (seen below during a daytime visit) at Las Arenas Beach was a great place for feeling amor while having dinner on the terrace with a view of the sea. At our table right above the water, we enjoyed the sounds of the waves crashing on the rocks below, a romantic moonrise, and the lights of the bars, restaurants, and resorts along the coastline. 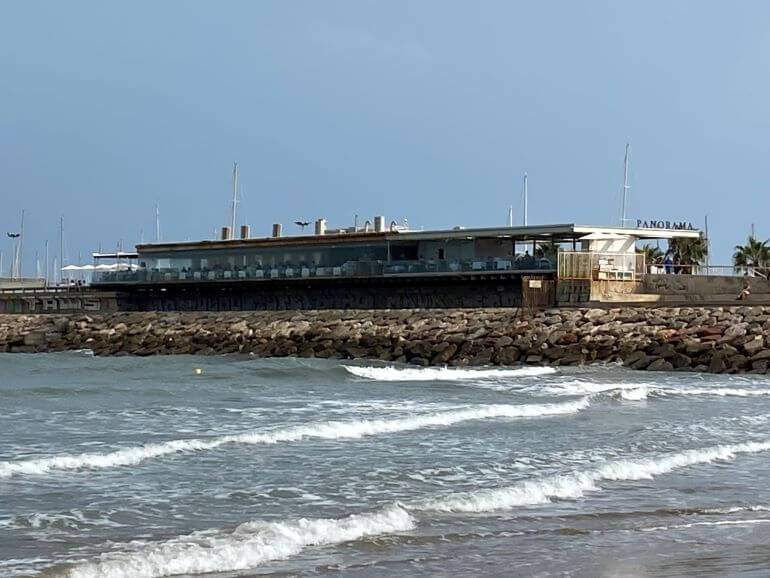 Next time tip: We’re very pleased with what we experienced on a first time trip, but we’d like to go deeper into other areas inside and outside of the city on a return trip. To the north and south, there are popular beach and resort communities like Benidorm, Alicante, and Calpe; recreation areas and nature parks like Parque Natural de la Albufera; and historic landmarks such as the castle high above the town of Xàtiva.

So much more to see and do.

Do you have any recommendations for first time or return visitors to Valencia?

PIN IT FOR LATER! 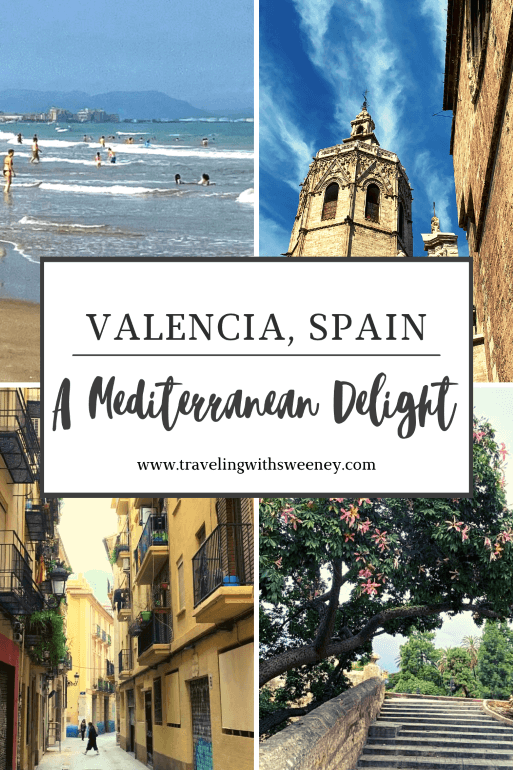 4 thoughts on “Valencia, A Mediterranean Delight”