There’s always something to capture your attention on a walk in New York! 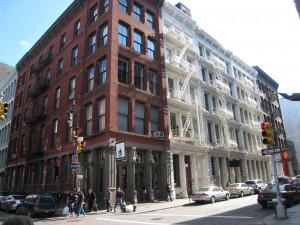 On a recent walk in New York City, I followed in the footsteps of immigrants, celebrities, and George Washington by taking a fun, educational and free walking tour provided by NYC by Foot. Their “Historic District” tour began at Spring Street and 6th Avenue, conveniently across from the subway station. The two hour walk covered about 1.2 miles of Soho, Chinatown and Little Italy — an area that includes part of the historic Five Points District. Our tour guide was Garrett Shore, an enthusiastic native New Yorker, and our group consisted of 11 people from Brazil, Seattle, New Jersey, and California.

We took a route that included artistic, historical, cultural, culinary and entertainment highlights. Our first point of interest was right where we were standing — a spot known as Richmond Hill. It was once George Washington’s headquarters during the American Revolution and later the residence of Vice President John Adams when the nation’s capital was New York City. Spring and 6th is also the starting point for New York’s Village Halloween Parade, the largest in the world. 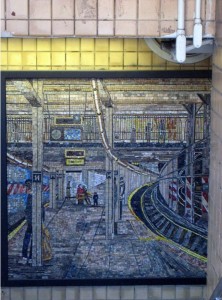 The streets of Soho are often seen in movies, on television and in magazines. Just starting off on the tour we passed Ben’s Pizza on Spring Street, a location familiar to Sex in the City and Men in Black fans. A little further along the route, we came across a live fashion photo shoot on Broome Street. Throughout Soho, there are high-end flagship stores and boutiques. The shops on W. Broadway are on the itinerary of the annual Fashion’s Night Out event in the city. Soho has been well-known as a haven for artists for decades. Today, there are still many galleries and on Sundays artists set up shop along W. Broadway. 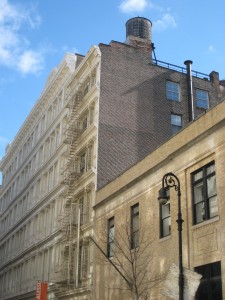 In Soho’s Cast Iron District there are many notable buildings that can take you back in time. The cast iron façade style of that period allowed for larger windows because fewer columns were needed. Another feature that you see on many of the old buildings in New York City is the still functional water tower.

Although I didn’t notice any celebrities and supermodels on the walk, Garrett said that many have apartments in the area: Cindy Crawford, Alec Baldwin, Naomi Campbell to name a few. On Broome Street, we saw the building where Heath Ledger lived in a 4th floor loft and where he died in January of 2008. The beaux-arts style old police headquarters at 240 Centre Street are now luxury apartments where wealthy celebrities and executives live. 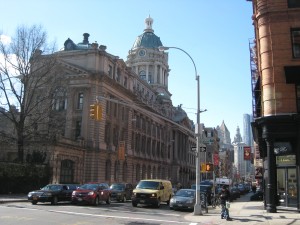 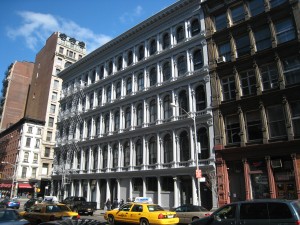 At 488 Broadway is the Haughwout Building where Elisha Otis installed the first commercial passenger elevator in 1856. A Bebe flagship store is now located in the building.

The famous Little Italy section of New York has been shrinking over the years, but there are still a few Italian culinary landmarks. Of course, New York is famous for pizza. Our tour took us past Lombardi’s, noted for being the first American pizzeria, opened in 1905. However, the original location is a block away. Alleva Dairy on Grand Street has been run by the same family since 1892. We stepped into the store to experience the delicious aromas of the many cheeses, meats and olives. Another family-owned business since 1892 is the Ferrara Bakery across the street where a wide selection of gelato was displayed in front. Passing by Umberto’s Clam House on Mulberry Street, Garrett told us about the infamous mobster, Joey Gallo, who was murdered at the restaurant in 1972. 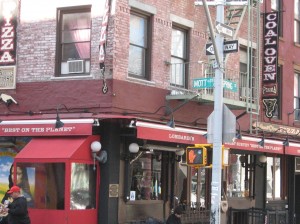 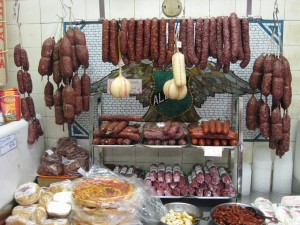 As Little Italy is getting smaller, Chinatown is expanding. There is a section of Mott Street where you can feel transported to another world with the sights, sounds and smells of the markets and shops. 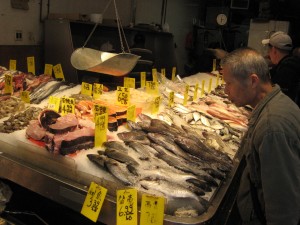 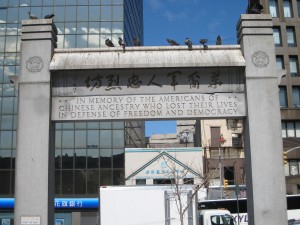 At Chatham Square, a statue of Lin Ze Xu (“Pioneer in the War Against Drugs”) stands in the center. The Kim Lau Memorial Arch reads, “In memory of the Americans of Chinese ancestry who lost their lives in defense of freedom and democracy.” 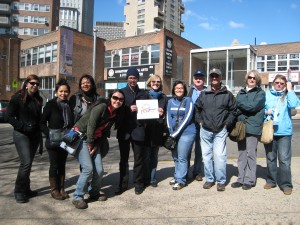 This only covers some of the highlights of the “Historic District” walk. NYC by Foot has several other free walking tour options in the city. There is no fee for the tours, but tips are appreciated. Check out the NYC by Foot website for more information.

31 thoughts on “Walking the Walk in New York City”