Milwaukee, Wisconsin holds a special place in my heart because of the five years I lived there long ago. After all, that’s the city where I met Mr. TWS. But sentimentality aside, would I recommend a visit to this city of about 598,000 located 90 miles north of Chicago? 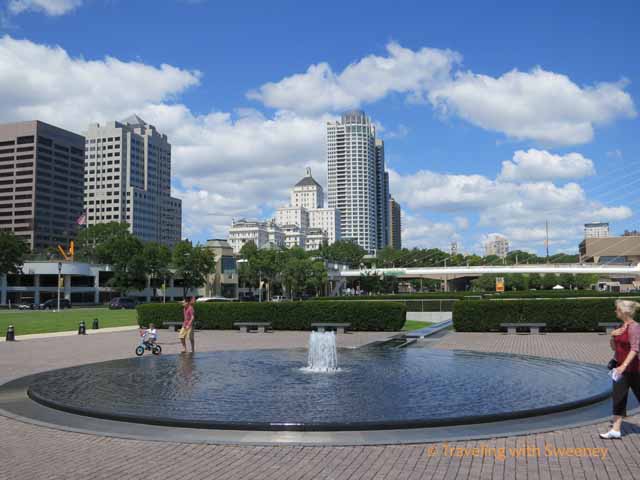 There are many reasons that Milwaukee can be called “A Great Place on a Great Lake”, a slogan that was popular in the past. Many things have changed in Milwaukee since the time I called it home, but from I’ve seen recently those changes are for the better. Here are just a few of my favorite things to do in Milwaukee with photos taken during a short visit last weekend.

Situated on the western shoreline of Lake Michigan, there are many outdoor recreational venues and parks along the waterfront. In the spring, summer & fall, the lakefront path is ideal for bicyclists, joggers and skaters on rollerblades. Even in winter, I like to walk along the lakefront in the snow and blustery winds. But that’s just me. 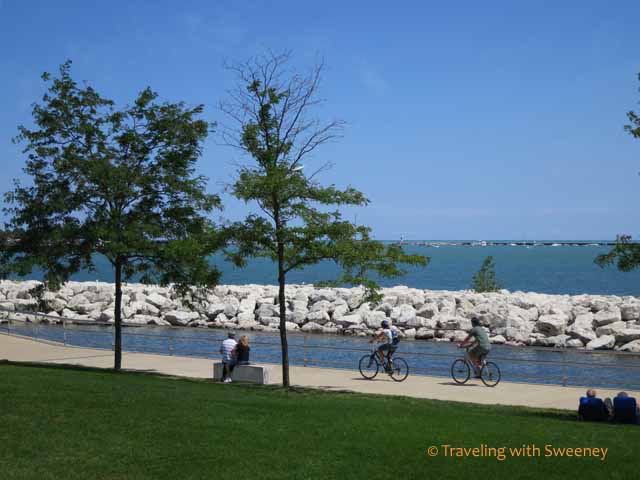 Paddleboats, skates and bikes can be rented at Veterans Park near McKinley Marina where you’ll also see colorful kites flying on breezy days. Get some exercise or just enjoy the people-watching from a blanket on the grass in the park. 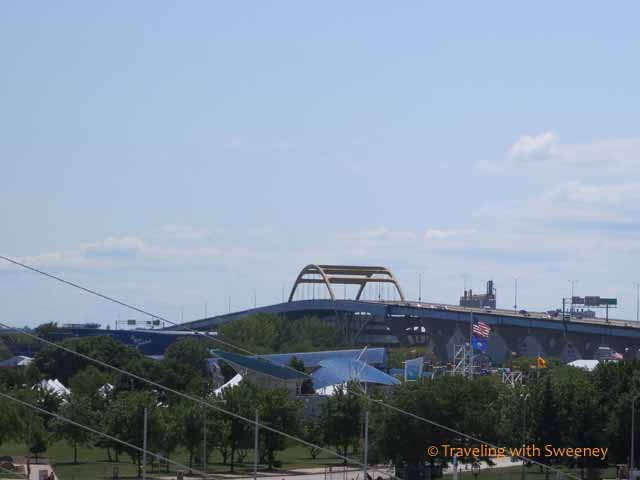 The summer sizzles at Henry W. Maier Festival Park with Summerfest and several ethnic festivals, such as Festa Italiana. Summerfest attracts rock, pop, jazz and country music headliners as well as up and comers on several stages in the park. Dozens of food vendors serve up tasty treats like mozzarella sticks from Saz’s, a Milwaukee favorite. It’s fun to sample different foods while hearing the music change as you walk past the stages. There’s still time to catch the world’s largest Irish festival, Irish Fest (August 16 – 19), and Mexican Fiesta (August 24-26).

Planes and Parachutist at Milwaukee Air and Water Show

Last weekend, we caught some of the Milwaukee Air and Water Show, featuring awesome performances by U.S. Navy and Air Force flying aces as well as other stunt pilots. As we walked around town, we often spotted the planes overhead as they circled back for their maneuvers in front of Bradford Beach. These residents have a good vantage point for watching the planes and boats on a hill at Juneau Park. The park is named after Solomon Juneau, a French Canadian who was one of the founders of Milwaukee. 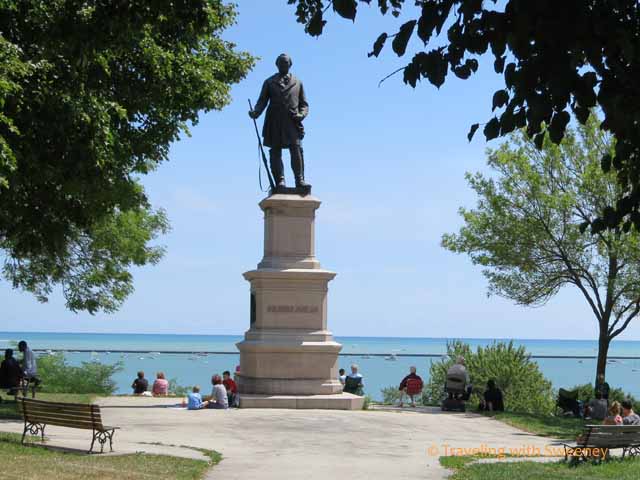 Happening this weekend is the Milwaukee Domes Art Festival from August 17 – 19. The venue is the grounds of Mitchell Park Horticultural Conservatory (“The Domes”) with plein air painters, music performances, and an art auction. But The Domes are open year-round, so if you can’t make it there for the art festival, be sure to visit another time. The three beehive-shaped glass domes are a great escape in the winter when you’ve just about had it with cold weather. The Desert Dome and the Tropical Dome offer a respite from Milwaukee’s frigid winter weather. A third dome changes for historical, cultural and seasonal exhibitions. 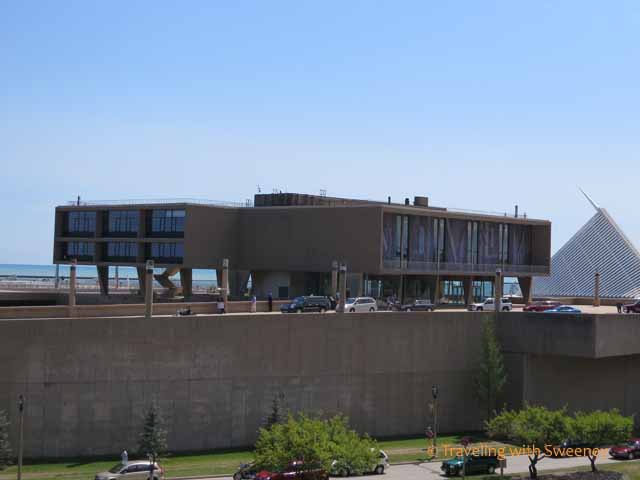 The Milwaukee Art Museum with over 25,000 works in its collection consists of two buildings designed by renowned architects. The modernist War Memorial Center, built in 1957 to honor the war dead of World War II, was designed by Eero Saarinen. 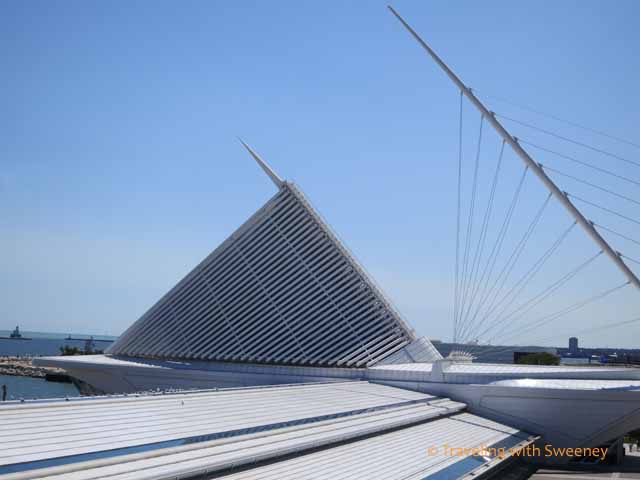 Next to the War Memorial Center is the newer Quadracci Pavilion that was designed by Spanish architect Santiago Calatrava and completed in 2001. This impressive structure has a vaulted 90-foot high glass ceiling and moveable sunscreen with a 217-foot wingspan, the Burke Brise Soleil, that unfolds and folds twice per day.

The Historic Third Ward,  two blocks south of downtown, has changed much since the time I lived in Milwaukee. Once neglected buildings and warehouses along the Milwaukee River have been renovated into art galleries, restaurants, retail shops, businesses and condos. The Milwaukee Public Market opened in October 2005 with wide selections of fresh produce, ethnic foods, fine wines, meats, and other artisan products.

As you may know, I love to eat. Although there are many newer places that I haven’t tried yet, here are three classics that I highly recommend in Milwaukee. 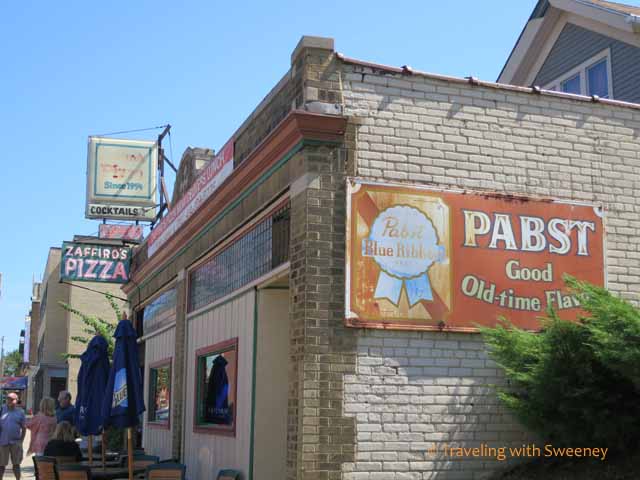 If you like pizza with extra, extra thin crust and traditional toppings (sausage, cheese and green peppers are my choice), head to Zaffiro’s on Farwell. It looks a little worse for wear on the outside and it’s not fancy on the inside, but the pizza is always a winner. The chianti is so-so, but with pizza like theirs — who cares?

Hands down, the best place I’ve been for a good, old-fashioned breakfast in Milwaukee is Ma Fischer’s also on Farwell. 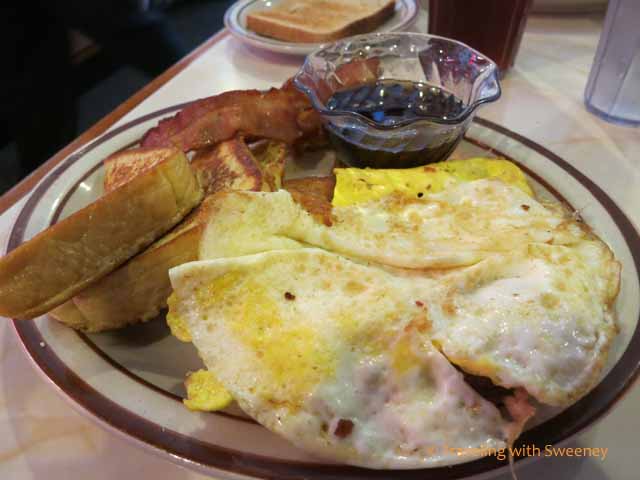 For lunch, dinner or just cocktails, I like the food and ambiance of Elsa’s on the Park on Jackson Square. I usually order either the Burger Alfredo (a burger with tomatoes, fresh spinach and a sauce of parmesan cheese, butter and spices) or the All American Grilled Cheese (with bacon and tomato). You won’t go wrong with either. 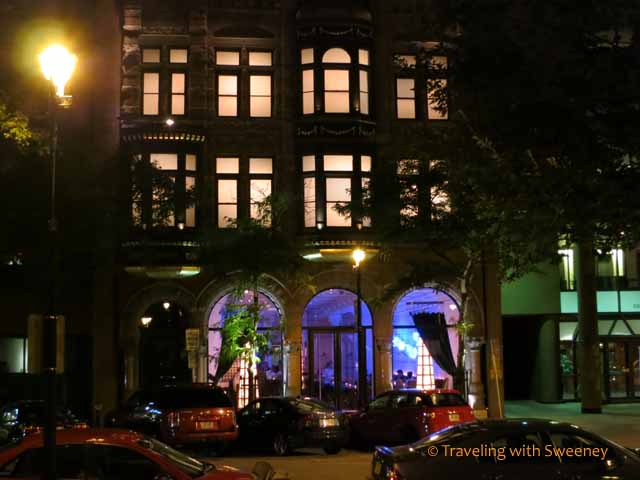 Elsa’s on the Park

After these indulgences, take a little time to cross to the other side of Jackson Square to admire the Cathedral of St. John the Evangelist and reflect. 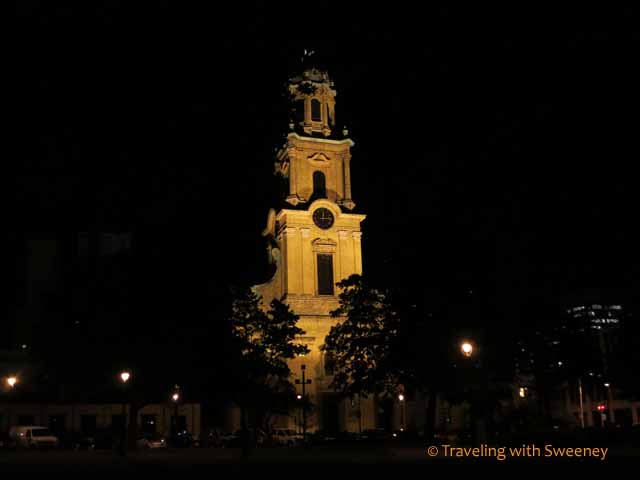 The Riverwalk extends three miles beside the Milwaukee River from the Third Ward through downtown with cafes, brew pubs, water taxi docks, and parks along the way. 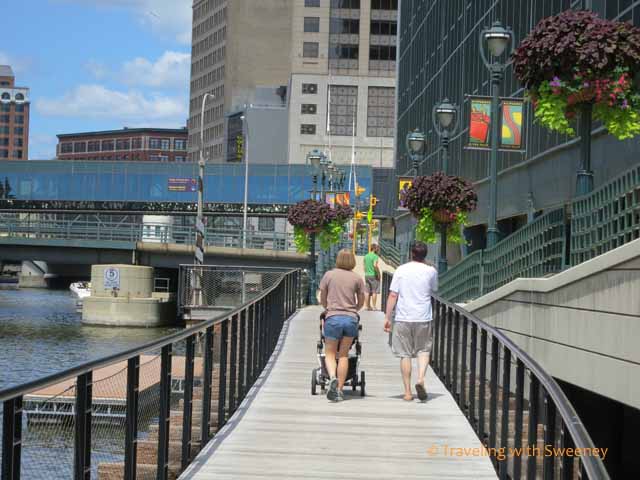 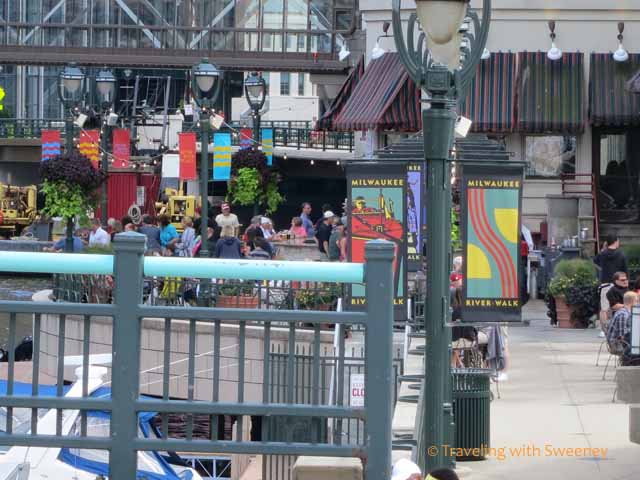 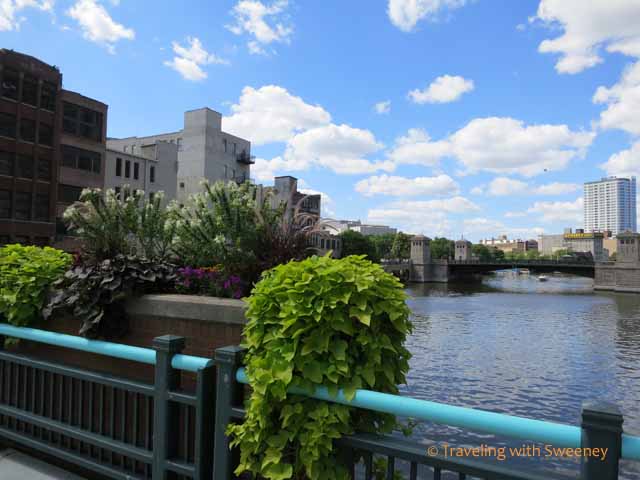 Have you ever been to Milwaukee? I’d love to hear about your recommendations for a visit to this great place on a great lake!

51 thoughts on “Milwaukee: A Great Place on a Great Lake”