Visiting the Washington D.C. area, you’re constantly reminded of early American history while wandering through the stomping grounds of founding fathers and historical figures. One of the most famous figures, of course, is President George Washington. It was interesting to hear many people I met refer to him affectionately as “George”. Just a 30 minute water taxi ride on the Potomac River took me from National Harbor, Maryland to Old Town Alexandria, Virginia, where I spent an afternoon walking in the footsteps of George. 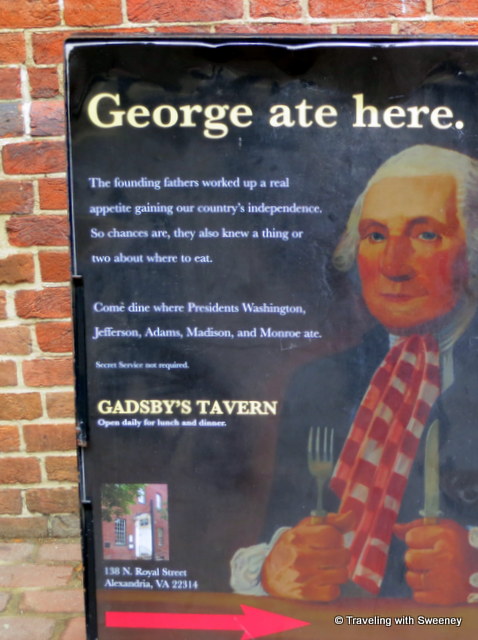 While in Alexandria, I met travel blogger, Whitney O’Halek, who talked about her city with enthusiasm and pride. Her suggestions of what to see in Old Town Alexandria helped me to make the most of the short time I had to spend there. Whitney was very kind to contribute her insights to accompany my photos in this article. 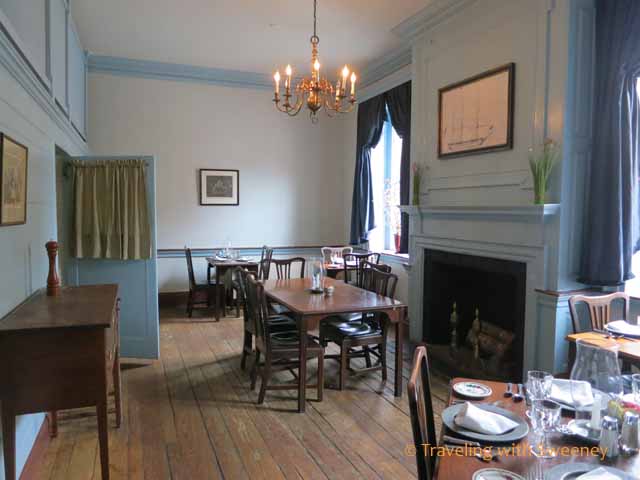 Whitney: Just like the sign says, George did in fact eat here at Gadsby’s Tavern — often! The roast duck was his favorite. The door you walk through is the same one George opened and closed himself. He actually gave his last military command from the front steps! One of the hidden gems of the Tavern is in the smallest of the three dining rooms shown in the photo. At the far window, overlooking Cameron Street, is the place where our hometown boy, George, ate his last public meal in November of 1799.

And that delicious picture you see there — that’s Martha Washington’s recipe for Cock-a-Leekie Pie! It’s a Colonial version of chicken potpie that includes chicken, leeks, other veggies, and plums. 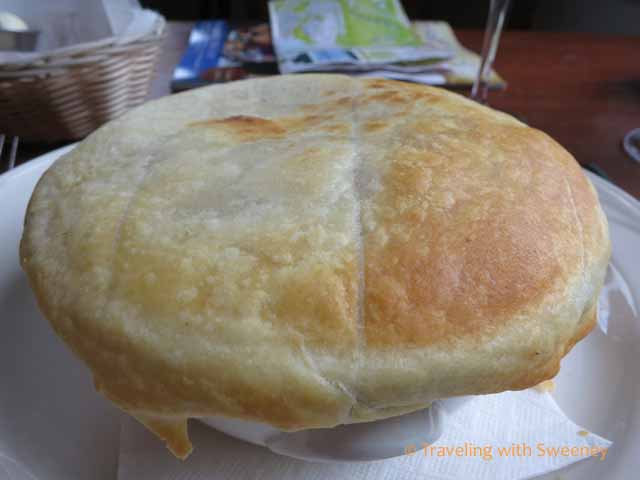 The house that George built 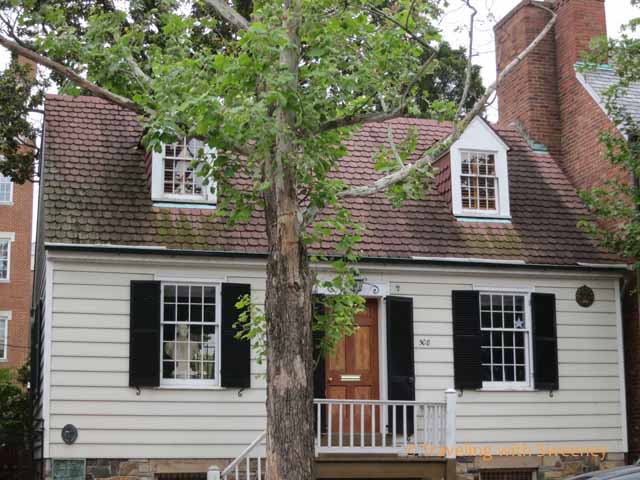 Whitney: George designed and built the house on this site in 1769 for himself and Martha. They needed to come up to Alexandria very often (for political reasons, to visit friends, to attend services at Christ Church, among other things), but the 10-mile journey from Mount Vernon to Alexandria took nearly half the day by horse.

The house stayed in the family for a few generations, but in the 1850s, the original house burned down. It was finally reconstructed in the 1960s using the same foundation stones that George himself used. They were able to recreate the outside of the house because one of George and Martha’s 8-year-old neighbor girls had drawn a picture of the house for them, and George had kept it with his diaries.

Whitney: There are many old homes in Old Town, but there are certain criteria to be awarded a plaque signifying that a house is registered with the Historic Alexandria Foundation. If you see an oval-shaped plaque on a house that says it’s part of the Historic Alexandria Foundation, you can be certain that the house is at least 100 years old, and that it looks the same as it did when it was originally built.

Whitney: The Ramsay House (also the Alexandria Visitors Center) is the oldest house in Alexandria. William Ramsay, a Scotsman and friend of George Washington who helped found Alexandria, built the house in 1724 in Dumfries, Va. then later moved the house — by barge! –from Dumfries to Alexandria. 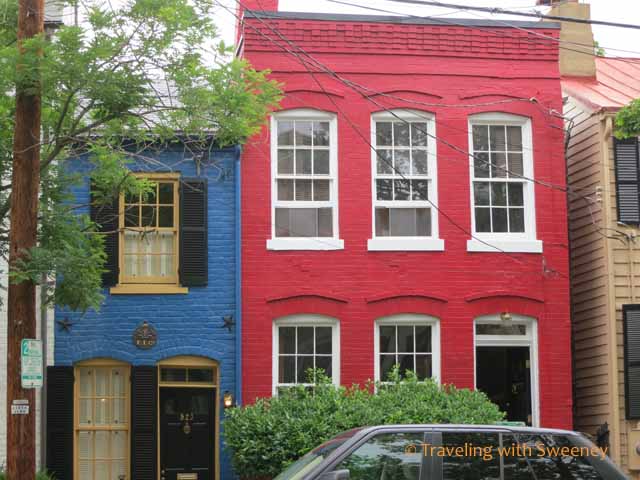 Whitney: The tiny blue house (the “Spite House”) was built in 1830. The space used to be an alley between the two houses on either side. One of the men who owned one of the houses liked parking his carriage in the alley, but the wheels would scratch the side of the other house. The guy with the scratched house of course didn’t like that one bit. He asked his neighbor to stop, but the neighbor of course did not. So, the guy with the scratched house decided his daughters needed a playhouse — so he built a house in the alley out of spite! And today we have the narrowest house in the United States of America, right here in Old Town Alexandria! 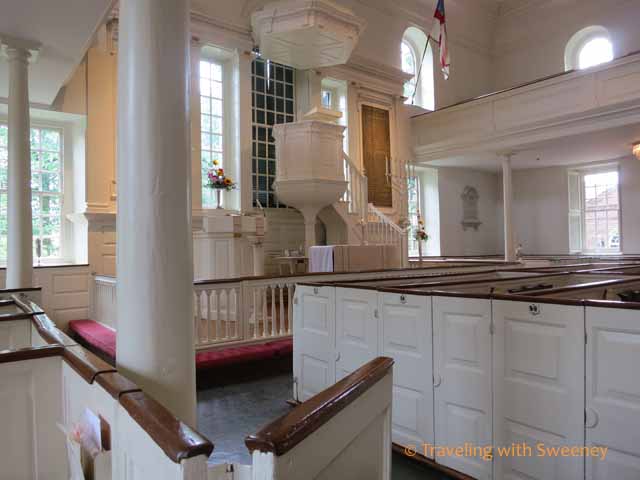 Whitney: Yes indeed, this was George’s church! He and Martha are not the only famous worshippers, however. Robert E. Lee and his family worshipped here as well. It was completed in 1773 and has withstood every war since the Revolution. During the Civil War, Union troops used the graveyard behind the church as a campground. While the churchyard is about one-half acre, there are over 1000 people buried there. 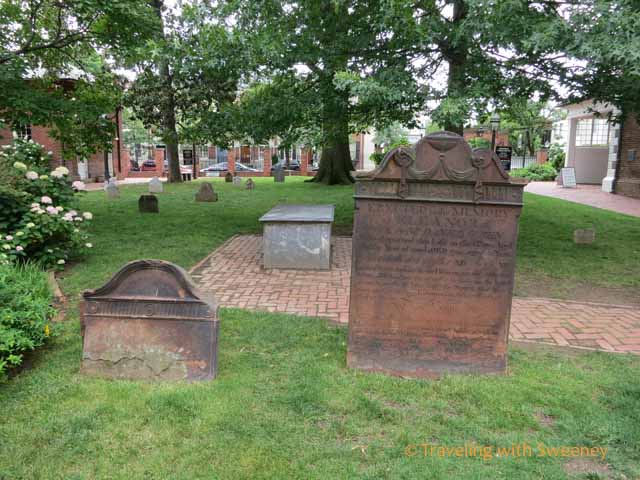 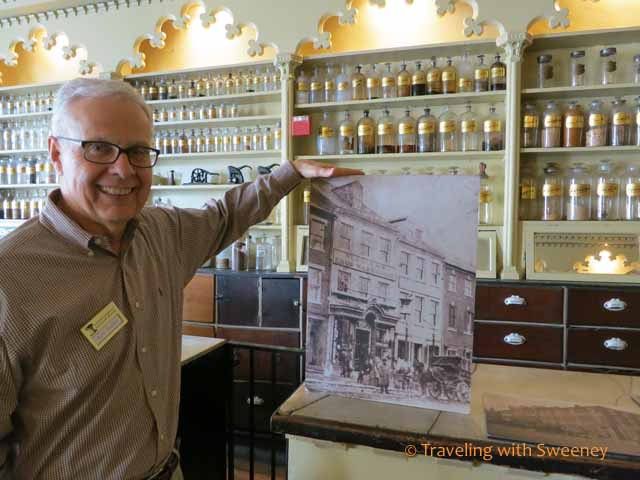 Whitney: If the walls of the Stabler-Leadbeater Apothecary Museum could talk, there would surely be a lot fewer secrets and mysteries around Old Town! This apothecary was fully functional from its opening in 1792 until it closed in 1933. We know that the Washingtons came here for their pharmaceutical needs because we have a note signed by Martha about picking up a prescription.

The apothecary was forced to close its doors during the Great Depression, but was re-opened six years later as a museum with everything still in its place, as it remains today.

Back to the present

Returning on the water taxi to National Harbor, I watched Alexandria fade in the distance. There will be more of Alexandria to explore another time. 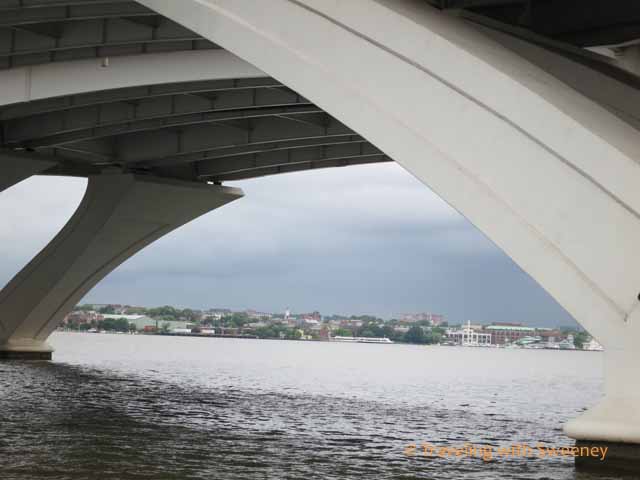 What should I put on the agenda for my next trip to Old Town Alexandria, Whitney?

Whitney: Make time for a Ghost Tour. Be sure to make time for Mount Vernon (and go by water taxi if you can), and definitely hit up the George Washington Masonic Temple just behind the King Street Metro. 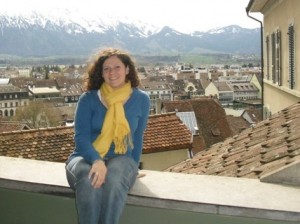