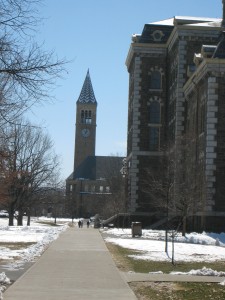 Did I ever mention that I went to Harvard, Northwestern, Stanford, Oxford and other prestigious universities? However, it was only to visit; not to study. Strolling on campuses in places I travel is a hobby of mine. I like the university atmosphere, energy and knowing that future leaders, scientists, doctors, lawyers (and high-profile defendants) are all around me. One of the few souvenirs I collect nowadays is a university t-shirt. I’ve also managed to sneak into a few empty classrooms and imagine being a professor. 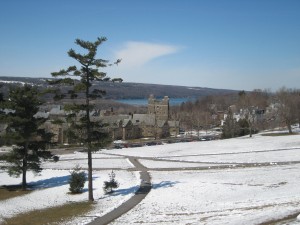 My visit to the Ivy League’s Cornell University in Ithaca, New York was more special. My husband is a Cornell alumnus and for years has told me about his time there and the beauty of the campus and surrounding area. I’m always proud to point out that he played football at Cornell, too. This was the first time he had been back since he graduated. 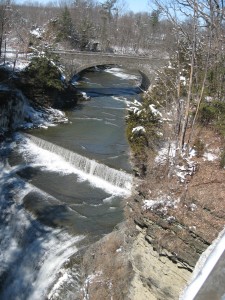 Ithaca is located in the Finger Lakes area of western New York State about 220 miles northwest of New York City and 250 miles southeast of Toronto. We drove from Toronto, where we had been on business, spending the night in Niagara Falls along the way (more to come on that in another post). The closest sizeable cities are Syracuse and Rochester. The small town of Ithaca has many restaurants, shops and galleries. It also boasts being the place where the ice cream sundae was created. 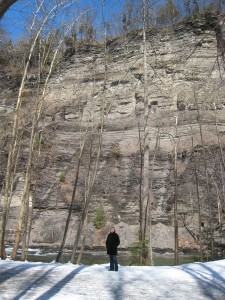 When I visited, there was fresh snow on the ground and it was quite cold. In many ways, that added to the scenes. Although I haven’t personally been there in other seasons, the photos I’ve seen show spectacular trees in bloom in spring and glorious fall colors. In the early 20th century, Ithaca was an important location for silent films because of the area’s natural beauty. 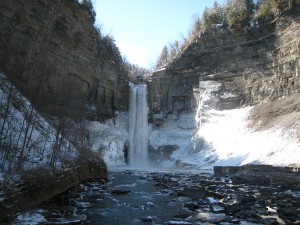 Built on a hill, there are views of Lake Cayuga, the longest of the Finger Lakes. Numerous gorges and waterfalls created by ancient glaciers are on campus and the surrounding areas. We hiked at nearby Taughannock Falls. We also drove to Watkins Glen State Park, about 30 miles from town, but could only walk in a short distance because the path beyond the gorge entrance was closed.

Cornell offers a wide range of undergraduate and graduate programs. Travelers may be interested to know that many professionals in the hospitality industry have studied at Cornell University which has the United States’ first college dedicated to hotel administration. The on-campus Hotel Statler is staffed by students in the hotel administration program. There is an impressive list of famous people who have graduated from Cornell in all fields. A university alumnus in the news recently is David Seidler who just won the Academy Award for Original Screenplay for The King’s Speech. Significantly, Cornell was the first Ivy League school to admit female students. 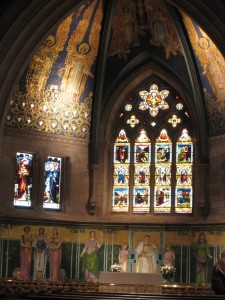 I could see why my husband had been so enthusiastic about taking me to see his alma mater and nature’s many gifts to this part of New York State. He enjoyed showing me around this place that had been an important part of his life. But with the passage of time, to him it was much like visiting many other places. It was a beautiful setting with interesting history, but there was no longer a strong attachment.

Have you gone “back to school” for a visit? How did you feel? 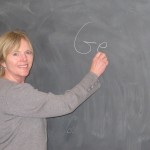 32 thoughts on “Back to School”