The Beatles Museum in Hamburg 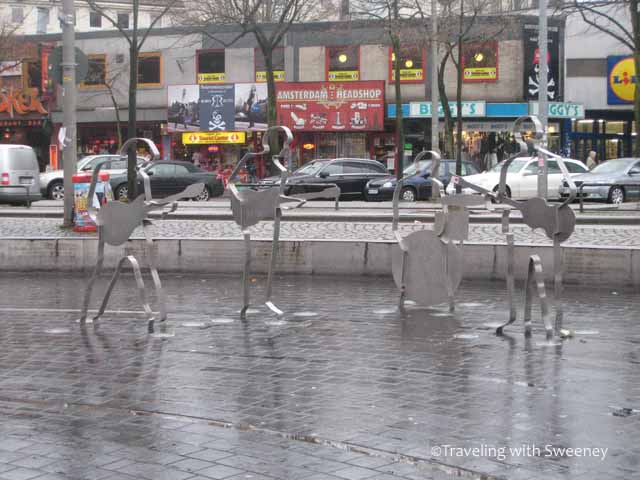 A DAY IN THE LIFE of a travel blogger. 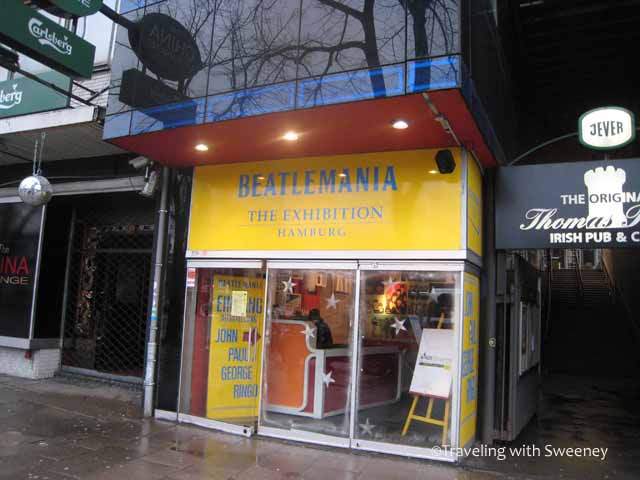 On this particular day in Hamburg, Germany, I started out by hopping on the U-Bahn and heading to the St. Pauli district to visit Beatlemania, located at the aptly named Beatlesplatz on Reeperbahn at Große Freiheit.

Beatlemania, opened on May 28, 2009, is a museum dedicated to celebrating the Beatles from their time in Hamburg in the early 1960s until their break up (officially announced in 1970). Their Hamburg experience, playing gigs on the Reeperbahn (the city’s famous red light district) while living in rather seedy conditions, really launched the band.

The Reeperbahn is not PENNY LANE.

The Star Club, Indra Club and Kaiserkeller, were a few of the clubs where the Beatles performed in the early 1960s. They were located along Große Freiheit, among the sex theaters and brothels. 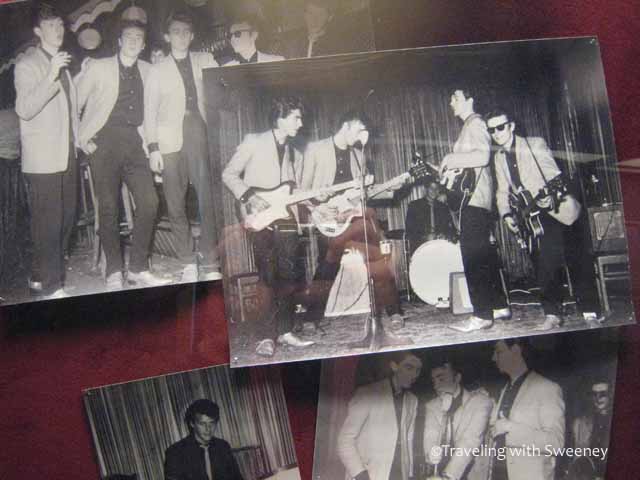 Performing in Hamburg, Photos at Beatlemania

When the band first came to Hamburg, it consisted of John Lennon, Paul McCartney, Geroge Harrison, and the lesser known Stuart Sutcliffe and Pete Best. Sutcliffe left the group in 1961 and Ringo Starr replaced Best in 1962. 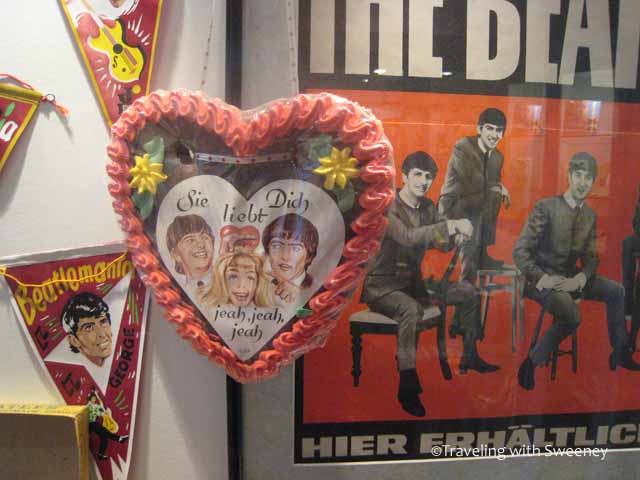 Sie Liebt Dich (She Loves You)

Beatlemania’s exhibits are on five floors with videos, photographs, interactive displays, news clippings, reproductions of places the Beatles lived and performed, and artifacts from that time period. There are also original documents, letters, autographs, news clippings, some of Stuart Sutcliffe’s artwork and postcards that Ringo sent his grandmother from Hamburg. 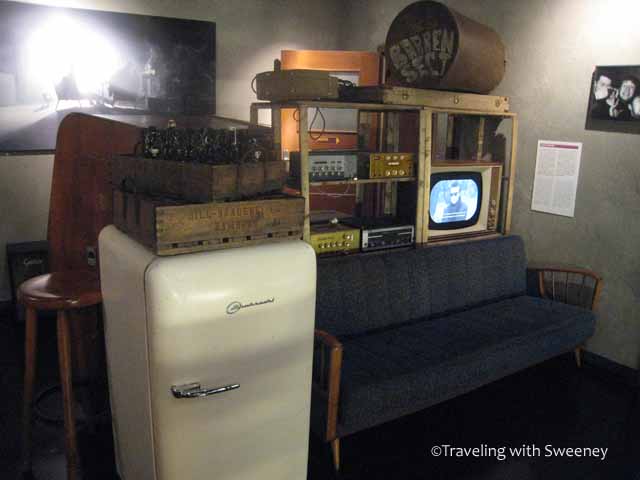 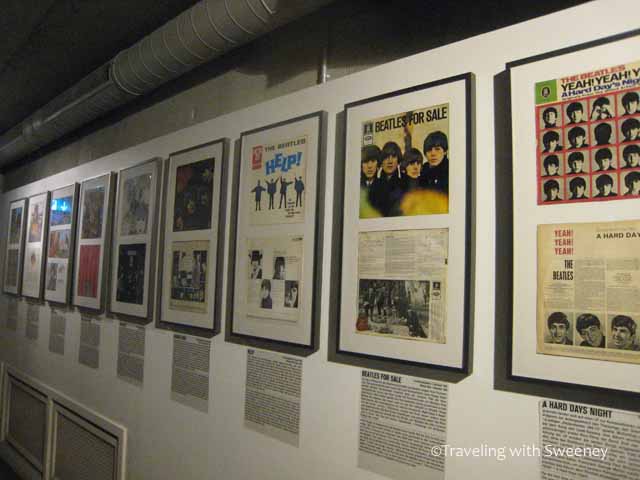 In the Abbey Road Studios exhibit, you can sing along with the Beatles and make your own recording, but I didn’t do it. If I had been with someone else, I might have been tempted to record one of my favorites, but I was by myself and a little self-conscious. 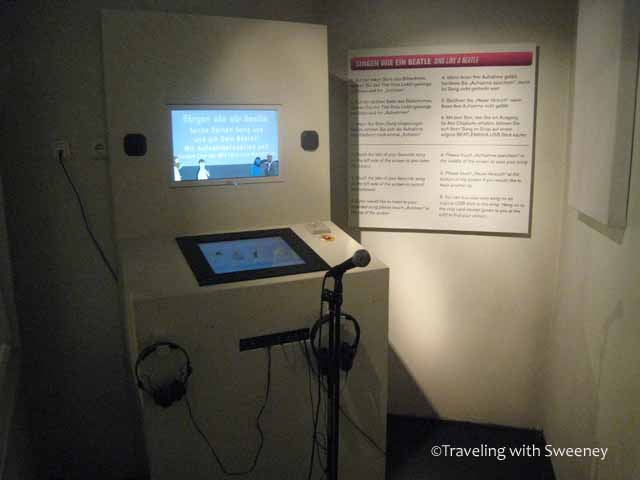 I don’t think I’d want to live in a YELLOW SUBMARINE. 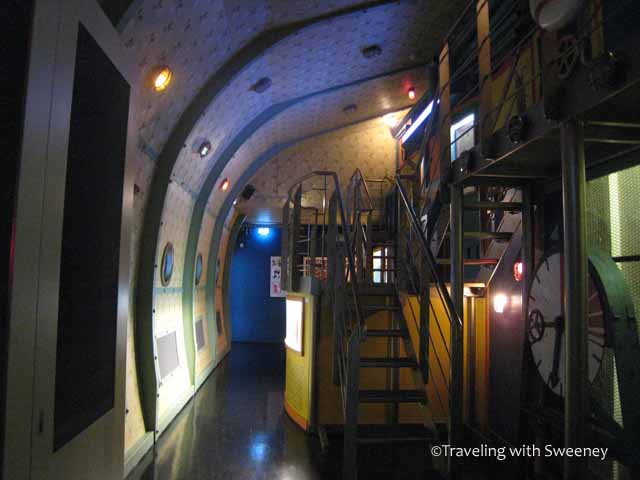 This exhibit puts you inside the “Yellow Submarine”. It was a rainy weekend morning in December, which may be why there were so few visitors to the museum that day.

SHE’S A WOMAN who was very important to the Beatles 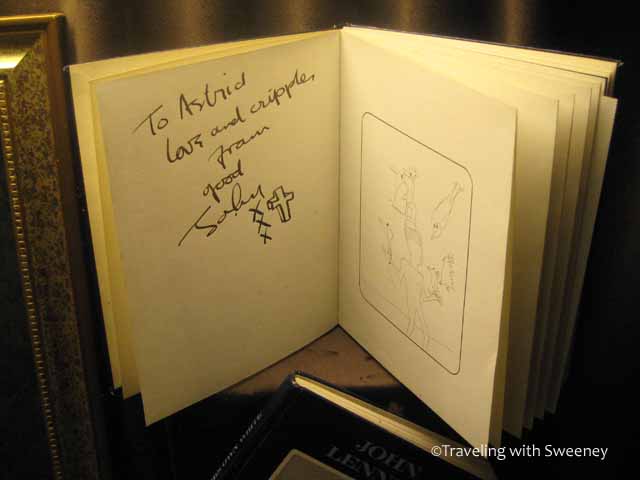 The above display is of an autographed copy of Lennon’s book, In His Own Write, given to Astrid Kirchherr. Kirchherr first met the Beatles at the Kaiserkeller. She was a close friend of each of them, but was eventually engaged to Stuart. In 1962, Stuart died of cerebral hemorrhage. Baby’s in Black was written about her mourning after Stuart’s death.

DO YOU WANT TO KNOW A SECRET? 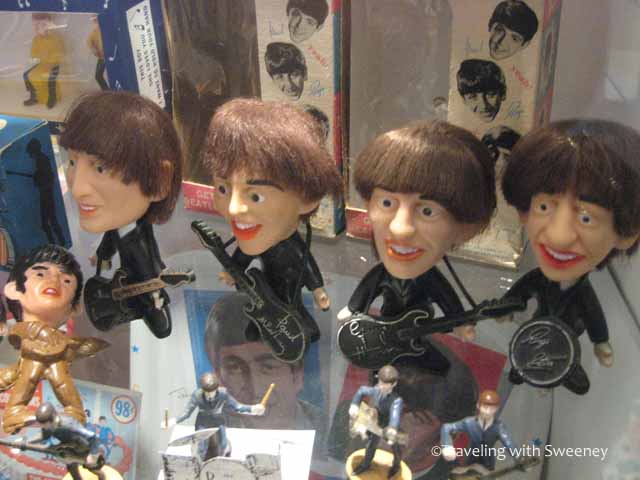 During the famous British Invasion of the Fab Four to the United States, Beatles items such as albums, magazines, school supplies, bubble gum and clothing were in huge demand. I’ll disclose here that I actually had one of these dolls — Paul. He was my favorite. I have no idea what happened to that doll. Maybe that’s mine in the case. 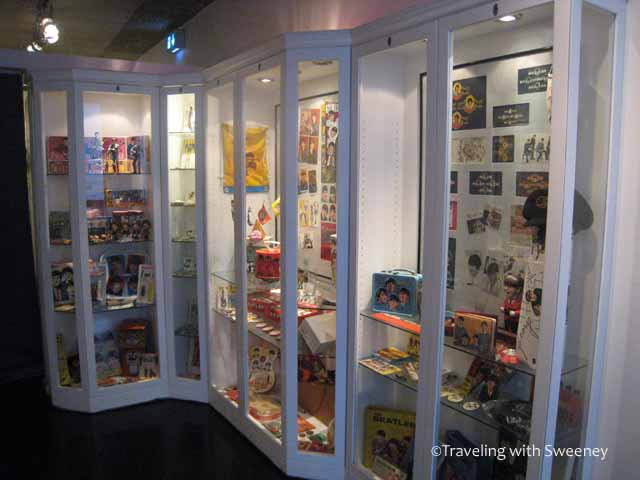 There’s SOMETHING about Yoko …. 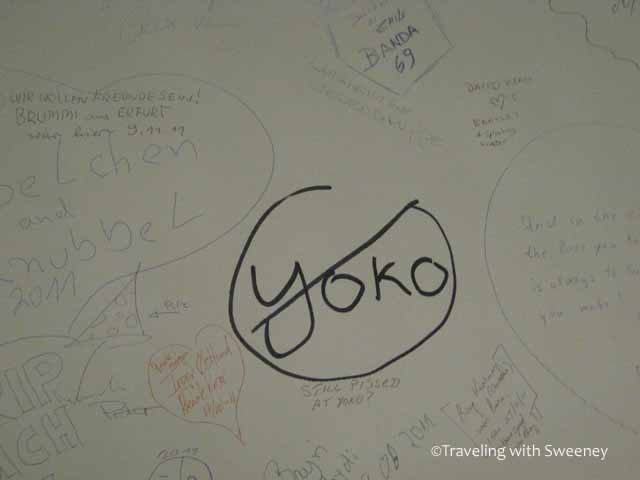 “Still Pissed at Yoko?” – graffiti on wall at Beatlemania

The walls of the Abbey Road Studios exhibit are filled with visitors’ graffiti, much like that on the wall around the real Abbey Road Studio in London. As evidenced here, many people blame Yoko Ono, who John met in 1967 and married him in 1969, for the breakup of the Beatles. Where do you fall on the issue?

My opinion: LET IT BE

HELP! by sharing your comments about the Beatles below.

30 thoughts on “Beatles on the Reeperbahn”