Cassis, France — a charming village by the sea

“He who has seen Paris and who has not seen Cassis can say … I have seen nothing.” Frédéric Mistral (1830 – 1914), beloved Provençal poet and Nobel Prize laureate

How could anyone make such a bold statement about Cassis, France, a medieval village in Provence?

After just a few hours in this village on the Mediterranean coast, I began to understand. 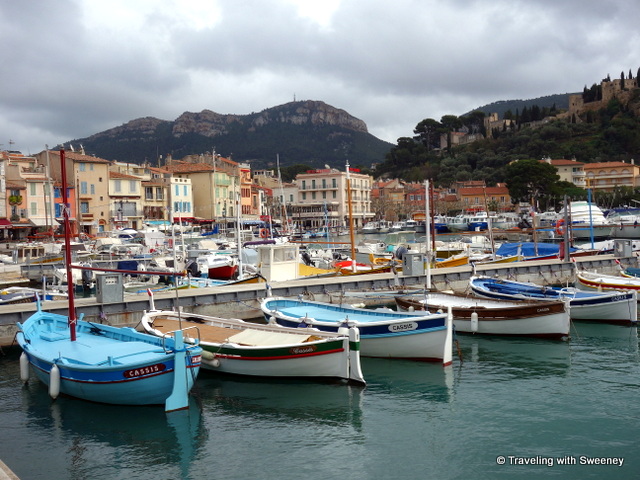 Quai Barthélemy — Boats in the harbor of Cassis

I always feel a bit sad on the last day of a trip. I think about how quickly the time has passed and often feel that I’ve been so busy I didn’t really get to embrace each moment enough. The morning of our last full day in Provence was no different. I would liked to have spent a little more time in our lovely accommodations at Hotel Plage Saint-Jean and walk again along the promenade of La Ciotat and gaze at the Mediterranean in its wild and wintry beauty. But we had plans for the day and what wonderful plans they turned out to be.

I enjoyed the luscious landscapes and vineyards as we steered the turns on the 13 kilometer drive from La Ciotat. Then I caught sight of Cassis tucked inside the surrounding cliffs and hills by the harbor with the blue Mediterranean beyond. On Sunday morning, the village was quiet as we slowly navigated the streets heading toward the port.

This seaside village of 8,000 residents was one of the highlights of our Provence trip. In the summer, especially during August, the population of Cassis jumps to over 40,000 as it’s an extremely popular summer resort, particularly for French and other European vacationers. It’s the kind of place where you feel you belong when you first arrive. The beautiful location in the Parc National des Calanques, the picturesque waterfront, and the Mediterranean ambiance are captivating. Although spring and summer would bring many for the sunshine and beaches, even this cool, overcast day in December there had a rather balmy feeling.

Let’s go for a walk 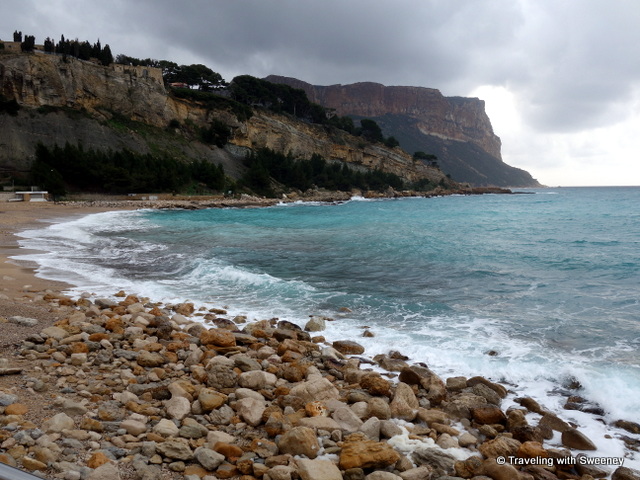 We had only about 4 hours to spend in town which, like many Provençal villages, is best explored by foot. Starting our tour, we stood on the esplanade gazing at the beauty of the Mediterranean coastline bordered by one of the tallest sea cliffs in Europe, Cap Canaille.

The amphitheater of hills and cascading buildings surrounding the harbor with its bobbing fishing boats created a picturesque scene. 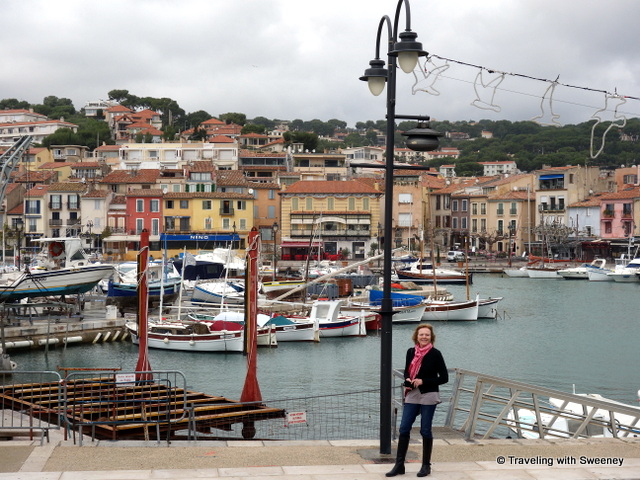 On most mornings, fishermen set up stalls along the quai to sell their fresh catches of the morning.  Depending upon the season, they offer sea bream, red mullet,  sole, turbot, squid, sea perch, conger eels, and monkfish (the last two being key ingredients of traditional Bouillabaisse for which the area is famous).

Château de Cassis on the cliffs above Cassis, France

It wasn’t long before we got our first look at Château de Cassis, once a fortress protecting the town from invading forces. Set high on a cliff above the port, it dates from the 13th century and remained a military fortress until the late 1800s. It’s now a privately-owned 5-star hotel and an imposing presence from many vantage points in and around Cassis. 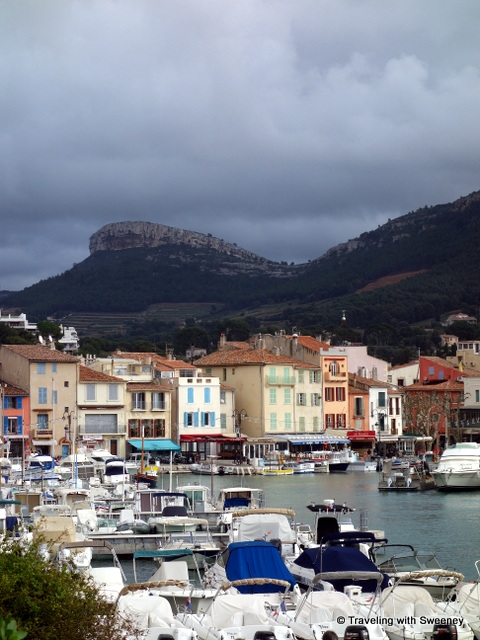 The town gets its name from the Roman “Carsicis Portus”, which means “crowned port”, referring to the striking stone peak that looks very much like a crown north of the village. It’s called Couronne de Charlemagne (the crown of Charlemagne). 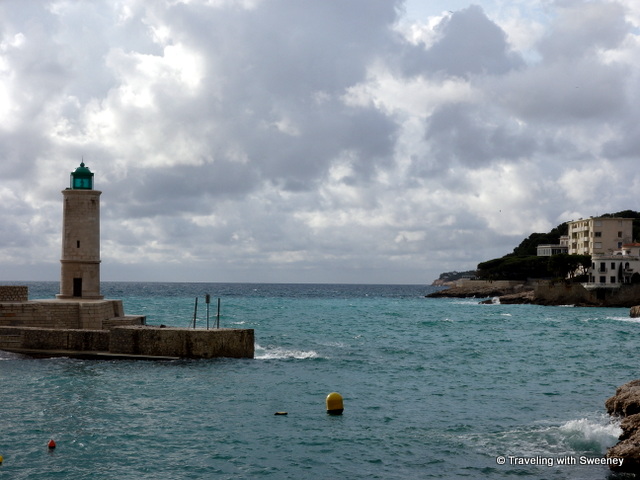 During our time in Provence, a highlight in each place was strolling around the old town districts, each with their own character and history. I loved the narrow lanes of Cassis that went uphill from the harbor, some with shops and restaurants, others with the homes of the fishermen. I’d be happy getting lost in this maze of streets for hours. 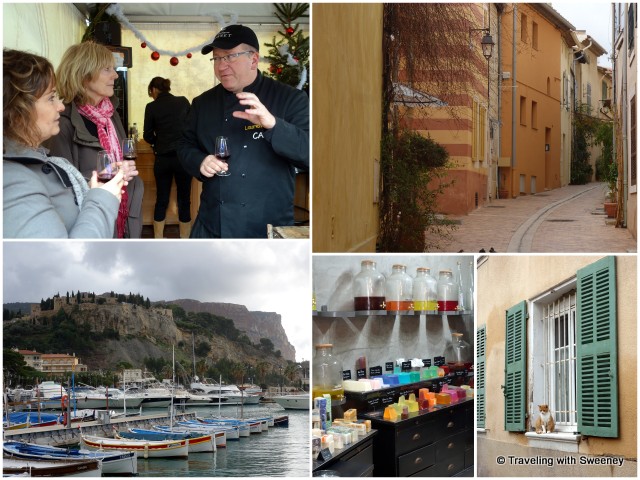 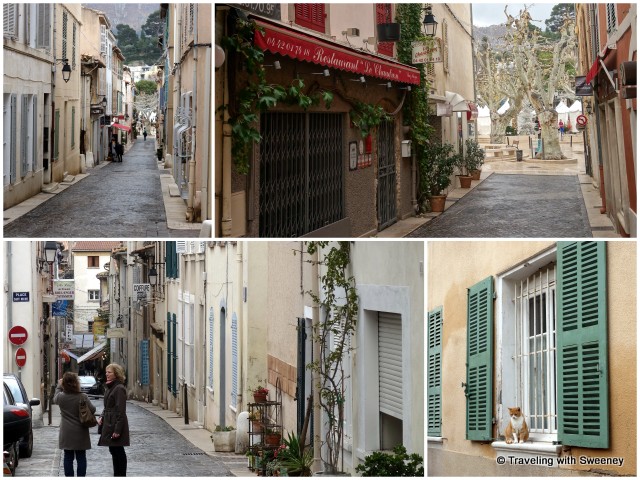 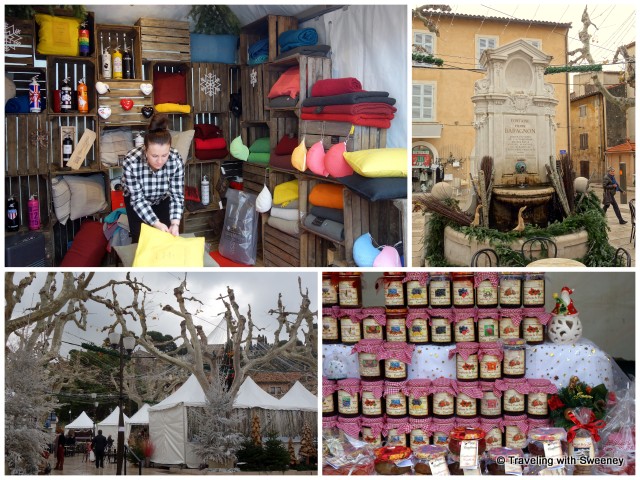 The squares of the village are lovely gathering places as well as the location of some of the town’s markets, special events, and monuments. At Place Baragnon are twice weekly (Wednesday and Friday mornings) markets offering items including food, flowers, clothing and jewelry. This Sunday was the final day of the annual Christmas market held on the square, and our final day of experiencing the Christmas traditions of Provence. The fountain Baragnon is an appropriate honor to the man that brought water from the Marseille channel to Cassis at the beginning of the 20th century. Water no longer had to be brought in from distant springs. You might also notice the gnarly-branched, leafless trees in some photos, such as the one bottom left, above. They are plane trees which are very common in Provence and are pruned dramtically for winter. 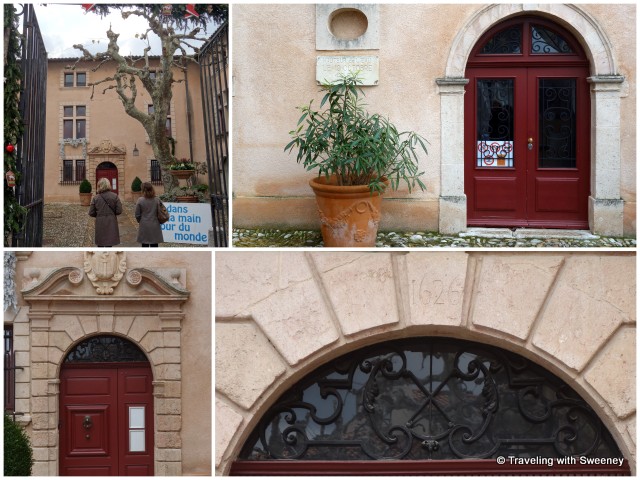 Historic Hôtel de Ville and offices of the mayor in Cassis

Adjacent to Place Baragnon is a public garden where the Mairie (Hôtel de Ville or Town Hall shown above) is located. It’s a listed historic monument built in 1626 which houses the offices of the mayor. We didn’t go inside, but enjoyed the exterior that has a plaque (just above the plant in the top right photo) on one of the walls to show the high water level of the devastating flood in 1858 that swamped the lower levels of Cassis up to two meters.

Rue du Général Bonaparte — Napolean slept here! In 1794 the general briefly stayed in Cassis during an inspection of his Provence troops.

I love coming across points of interest like this one — a building where Napoleon stayed briefly when inspecting his troops in Provence. The occasion is marked by a plaque and the street is named in his honor — Rue du General Bonaparte.

A scent of Cassis

Sometimes you just have to stop and smell the …. perfume. And we did exactly that at L’eau de Cassis Parfumeur Créateur, boutique and museum, a family-owned business creating fragrances since 1851.

They have two boutiques in Cassis (one which is also the museum), one in Marseille, and one in Grasse. The fragrances are created from the fresh flowers of Provence, including lavender for which the region is famous, but they also have many diverse and lovely perfumes, including Escapade a Cassis with a version for men. Mr. TWS doesn’t like to wear cologne, but he acknowledged that this one was quite nice. The ground coffee in the bottom right photo below is used to clear the nose between sniffs of the various perfumes, much like clearing the palate with crackers between tastes of wines. 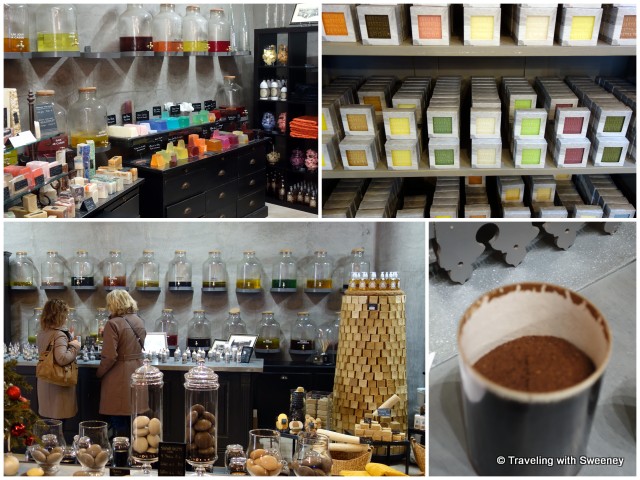 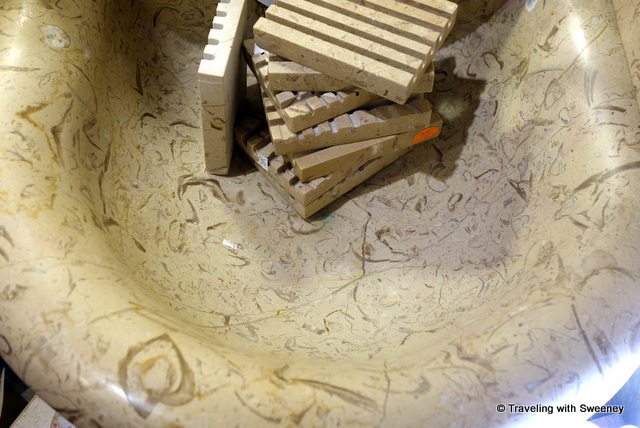 Stopping in another shop, we saw some of the gorgeous Cassis white stone, a unique hard limestone (from local quarries first opened in 1753). I loved looking at the beautiful products, mostly sinks and decorative objects. The stone is often used in constructing buildings and monuments. I found it interesting that the base of the Statue of Liberty in New York, a gift to the United States from France, is made with Cassis stone. Other examples of its use are the docks of Marseille (and other Mediterranean ports) and the Church of St. Michel in Cassis.

A taste of Cassis 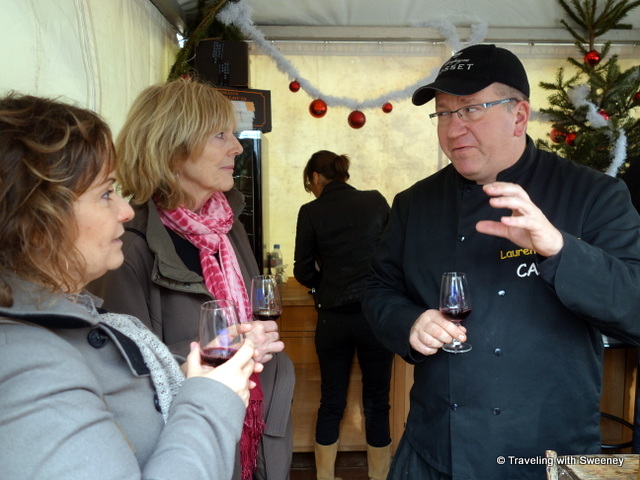 There are 12 wine estates in Cassis and we passed a few of the terraced vineyards sheltered by Cap Canaille on limestone hillsides during our morning drive from La Ciotat. The Cassis AOC ( Appellations d’Origine Controlee) created in 1936,was one of the first in France. Our introduction to the area’s red wines was by Laurent Jayne, proprietor of Domaine St. Louis Jayne, a family wine-making operation since 1893. At the Christmas market at Place Baragnon, Laurent was showcasing his 2013 Les Oratoires red wine (produced in very small quantities on the estate’s old vines) at the vineyard’s booth (as well as frying up sausages at another).

Although the reds and rosés of Cassis are known for excellence, its white wine is the real star of the region and accounts for 67% of Cassis wine production. It’s a crisp, light, elegant white wine that we enjoyed at lunch at La Vielle Auberge on the waterfront. Distribution is limited outside of Cassis, so be sure to enjoy it while visiting.

An interesting bit of Provence wine history is that in 1865,  phylloxera (a grapevine pest) wiped out the grape growing in the region. Fortunately, mainly due to vine grafts provided by the United States, the region was able to recover.

Wine and food event tip: Les Vendanges Étoilées is a gourmet event during the harvest of September where wine growers, chefs, and enthusiasts come together for cooking demonstrations, wine tasting, and live entertainment. 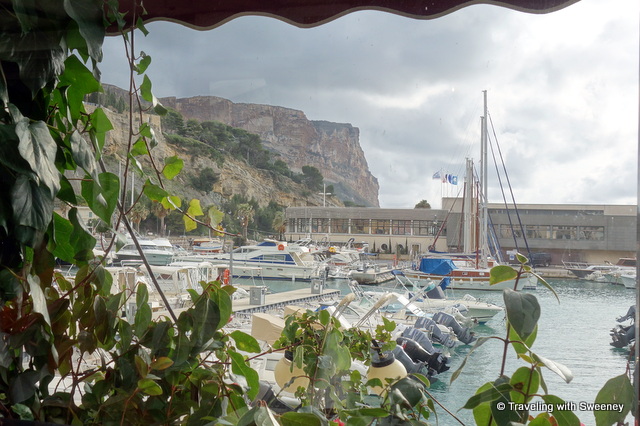 View from my seat at La Vielle Auberge

The view couldn’t have been better from our table by a window overlooking the harbor at La Vielle Auberge on the Quai Barthélemy.

We loved the warm, comfortable ambiance and the hearty and delicious authentic regional food. A nice touch was the customary welcoming glass of Rosé we were served as soon as we were seated. Our entrees were accompanied by a lovely light Cassis white wine (paired with the moules gratinées below). Our lunch included soupe de poisson which was prepared at the table; fresh sea bass for two enjoyed by Mr. TWS and our companion (I had duck breast); and for dessert, delectable chocolate cake and hot apples with ice cream. The food, the wine, the view, and the service were excellent. 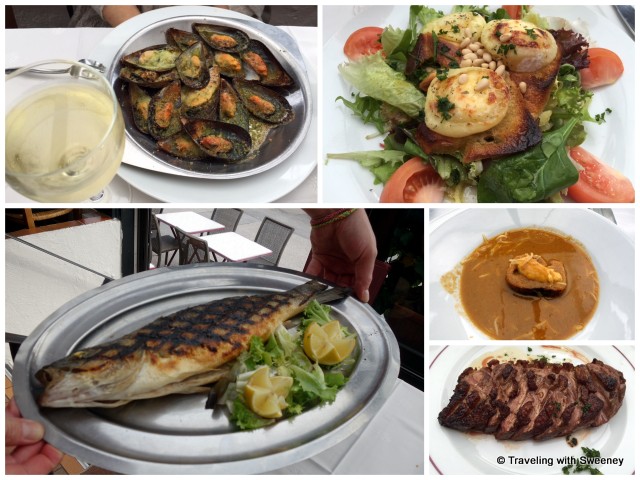 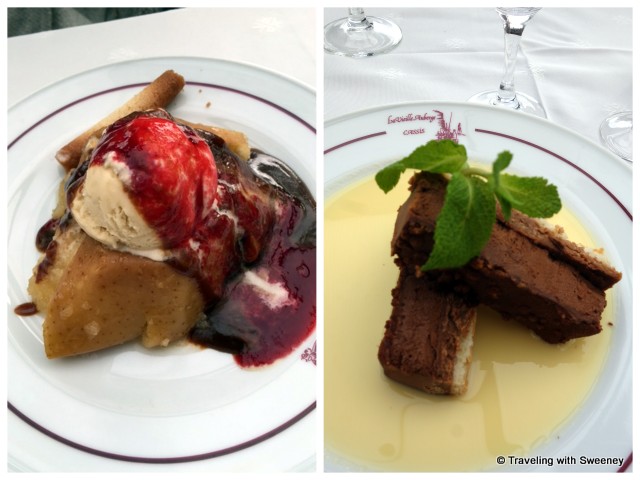 Our meal was a wonderful part of our introduction to Cassis, but soon it was time to make our way toward Marseille where we spent our final evening in Provence. 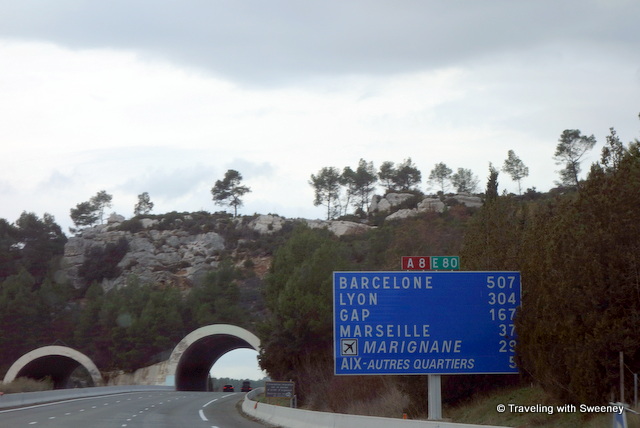 Next time in Cassis, France

Although I couldn’t possibly say that I’ve got in-depth knowledge about Cassis after such a short time, I can say that I know enough to want to return. These are among the things we’ll make an effort to do on a future visit. 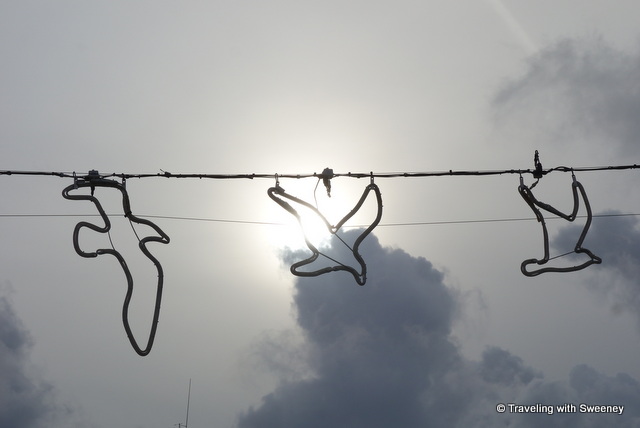 For more information: Tourist and Convention Office of Cassis

Stay tuned for more posts about our time in the cities and villages of Provence.

Disclosure: Our lovely time in Cassis was made possible by the Cassis Office de Tourisme and Bouches-du-Rhône Tourisme, but our opinions and perspectives are our own — as always.

48 thoughts on “Cassis by the Sea”