After a morning of sightseeing, visiting museums or walking miles around a city, I enjoy stopping for lunch. It’s a simple pleasure that I don’t like to miss. The location, ambiance and a seat by the window or on the patio are main ingredients for a pleasurable experience. It’s a chance to think about where I’ve been and where I want to go next. Of course, it’s also about the food. 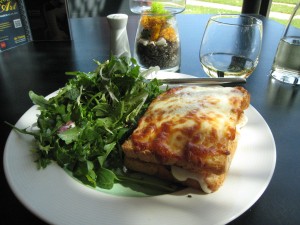 Although I’m an avid follower of several food and travel blogs that highlight exotic dishes from around the world with mouth-watering photographs, my culinary experiences are fairly simple. And I do tend to order familiar foods that I know I like. In the case of Croque Monsieur, I may be addicted.

Croque Monsieur (which roughly translates to “crunchy mister”) is a sandwich that I crave served in bistros and cafés. There are many variations of the sandwich, but it’s basically toasted ham, cheese (usually Gruyere or Swiss) and a sauce (either mornay or béchamel) and may be baked or broiled. I’m more often than not likely to order it over any other lunchtime entrée, whether I’m in France or the United States. I’ll always look at a restaurant’s menu, but my choice is usually made before I walk into the place. 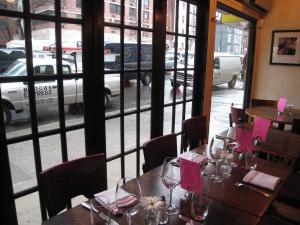 On a recent afternoon in New York I had Croque Monsieur at Matisse, a café at 924 Second Avenue, while seated by the windows watching the busy traffic outside. I love this very international part of Midtown East called Turtle Bay near the United National headquarters. I could hear French being spoken by several customers.

Café de la Presse at 352 Grant Street in San Francisco served a very good Croque Monsieur. The friendly service and my table with a view of the Bush and Grant Street entrance to Chinatown made it an especially nice lunch. 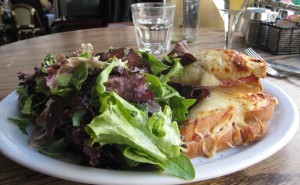 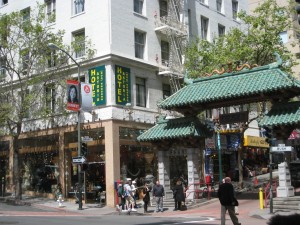 But I don’t always go to places that have Croque Monsieur on the menu. Here are a few recent experiences. 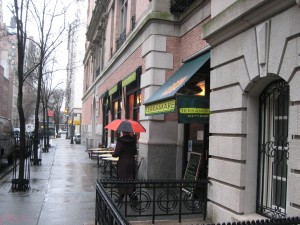 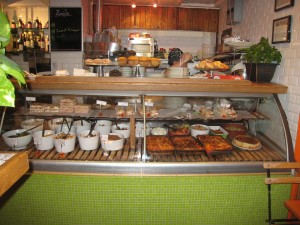 Another café that I like in New York for lunch is Terramare at 22 East 65th Street on the Upper East Side. There I had a turkey panini and a bowl of lentil soup. It was perfect comfort food for a cold and rainy day. 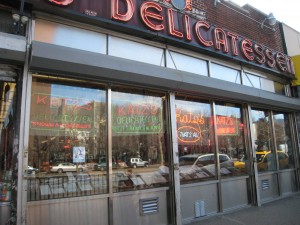 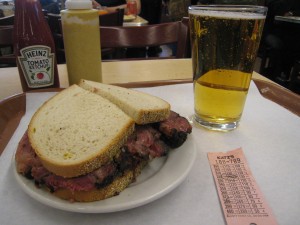 Katz’s Deli at 205 East Houston on New York’s Lower East Side, established in 1888 by a Russian immigrant family, is famous for its massive sandwiches, soups and personality. I had the best pastrami on rye I’ve ever had, but it was way more food than I needed or could finish.

After lunch, I’m off exploring again while keeping an eye open for a place to indulge in dessert. 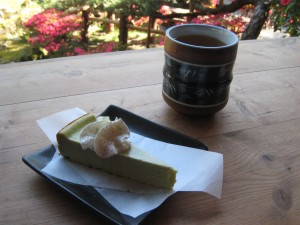 The Japanese Tea Garden at Golden Gate Park in San Francisco is a peaceful and beautiful place for enjoying Green Tea Cheesecake and Jasmine Tea. 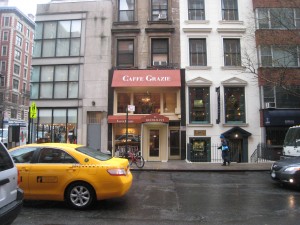 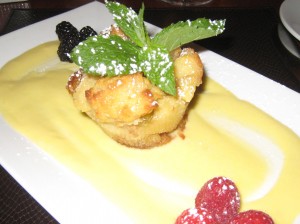 Working up an appetite walking around on New York’s Upper East Side, I stopped at Caffe Grazie at 26 East 84th Street for Italian bread pudding and coffee. 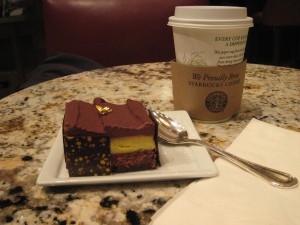 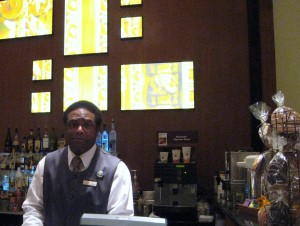 Following an afternoon at San Francisco’s Union Square, I visited the historic Westin St. Francis on Powell Street for a treat at Caruso’s, right off the lobby. I enjoyed the pleasant service and conversation of the nice gentleman in the photo and the delicious chocolate mousse dessert with orange filling. 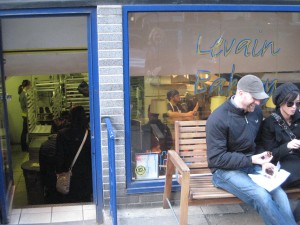 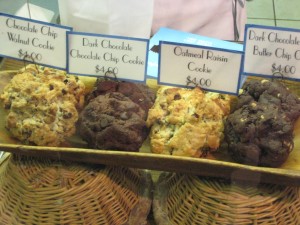 What could be a more basic dessert option than cookies? But the cookies at Levain Bakery at 167 West 74th St in New York are quite extraordinary at 6 ounces each and made with a few secret ingredients. The Chocolate Chip Walnut Cookie is a big favorite there and the one that I tried. Delicious!

So I’ve made my confession about my addiction to Croque Monsieur and shared a few other simple pleasures. What about you? Do you have a food confession?