My introduction to Hemingway came about with a set of three novels I’d received from a mail order book club I belonged to in my late teens. I opened the first of those, The Sun Also Rises, and became absorbed with the characters, drama, romance, and European locations. When I finished, I quickly went on to read and love the other two — A Farewell to Arms and For Whom the Bell Tolls. I think I’ve read all of his novels since then. Are you a Hemingway fan?

Based on his body of work and life experiences, many associate places such as Havana, Key West, Paris, and Spain with Hemingway. We also think of Ketchum, Idaho, where he tragically took his own life on July 2, 1961. But the story of Ernest Hemingway actually began in the Chicago suburb of Oak Park, about 10 miles west of downtown. 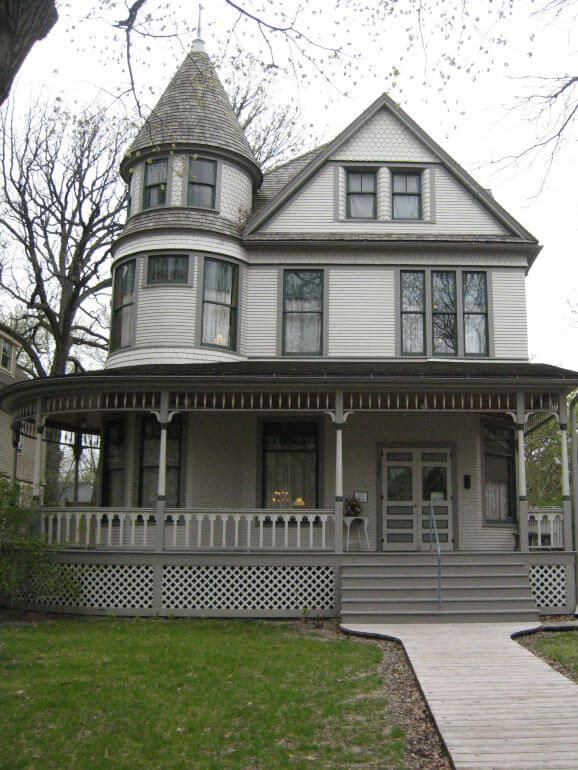 Ernest Miller Hemingway was born on July 21, 1899 on the second floor of this Queen Anne Victorian home in what is now designated as the Hemingway District of Oak Park. He lived there with his parents, siblings, grandparents, and uncle until he was six years old when the family moved to a newly-built home a short distance away at 905 Kenilworth Avenue (a private residence, not open to the public). Hemingway remained in Oak Park through his high school years. 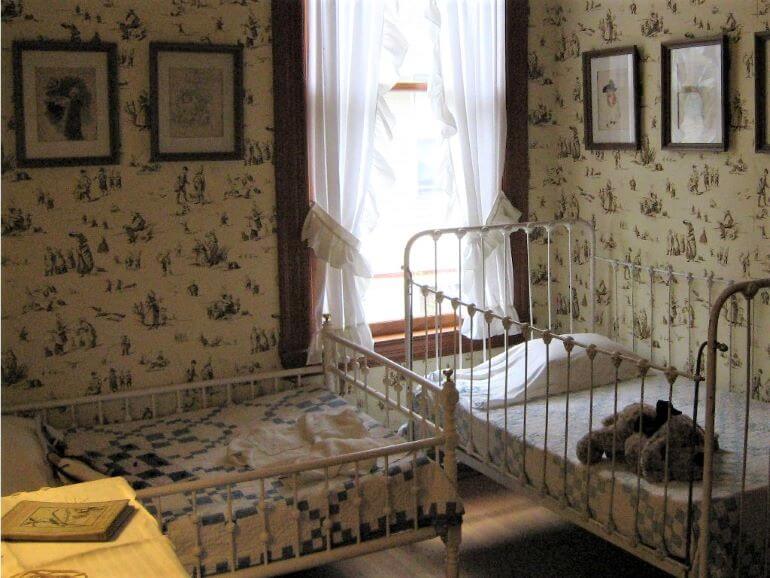 A guided tour of about 45 minutes takes visitors through the home, including living areas, kitchen, bedrooms and the nursery where Ernest slept. Thanks to photos of the house taken by Ernest’s father, the house was restored in the 1990s to the way it looked during the Hemingway years. Most of the furnishings are not original to the house, but a red ribbon indicates pieces (like the chair in the photo below) that belonged to the family. 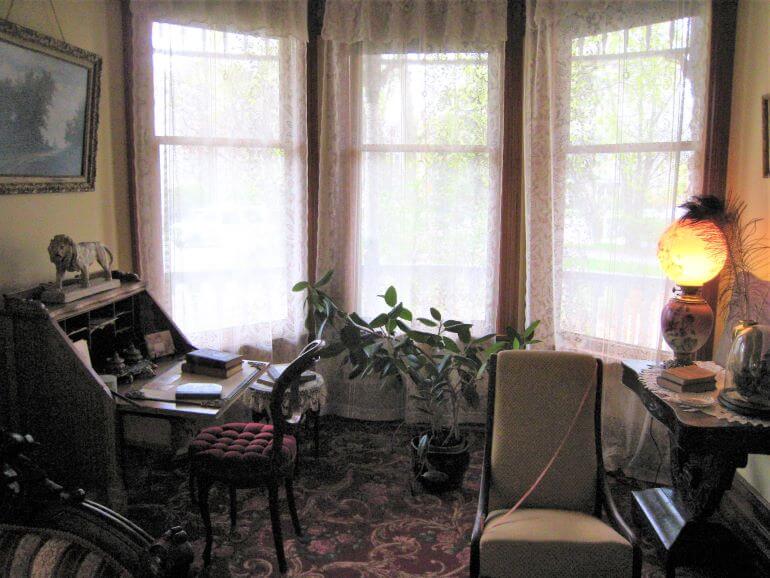 Red ribbon across the chair marks it as original 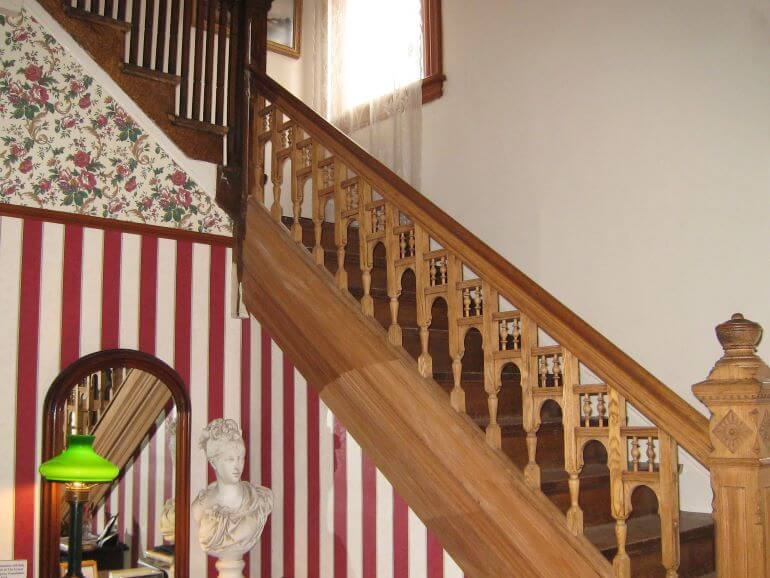 Adding to the experience of a visit to Hemingway’s first home and getting a glimpse of late 19th century life, guides share interesting anecdotes and information about the family members and their influence on young Ernest. Dr. Clarence Hemingway, his father, instilled an appreciation of nature in Ernest and even had a collection of wildlife specimens on the top floor of the house. 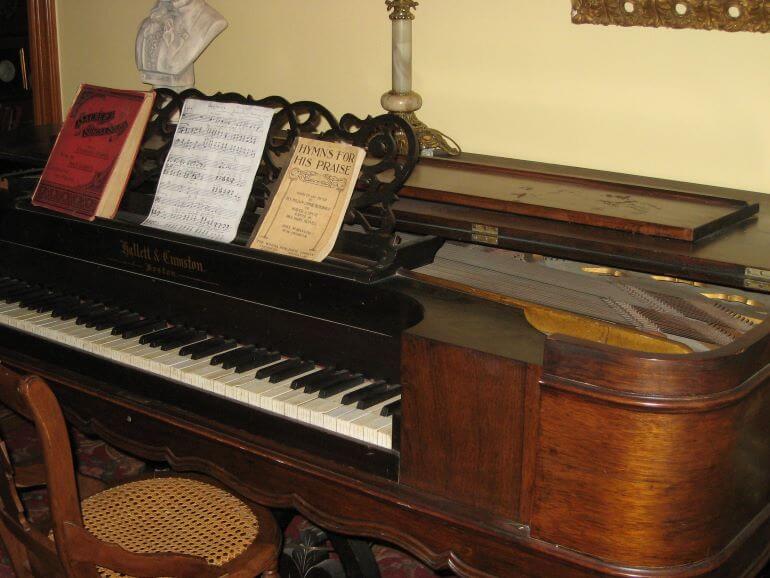 Grace, his mother, was a strong cultural influence. She was an opera singer and talented musician and ensured that Ernest had exposure to the arts by taking him to museums and the opera in downtown Chicago. Ernest was also intrigued by the travel stories of Uncle Tyley, a very colorful character and engaging storyteller.

The influences of each certainly contributed to the life and writings of the adult Ernest Hemingway.

Have you visited Hemingway Birthplace Museum or other Hemingway landmarks?

Lunch tip: There are many restaurants to choose from in and near the city’s Hemingway District (part of the larger Frank Lloyd Wright Historical District). Just down the block at 211 N Oak Park Ave is Hemmingway’s Bistro in the Write Inn, a lovely place to stop for lunch when you visit Hemingway’s Birthplace Museum. The extra “m” in the name isn’t a typo.

Oak Park visit tips: Even is you’re not a Hemingway fan, there are plenty of other reasons to visit Oak Park. Don’t miss visiting touring the Frank Lloyd Wright Historic District to Frank Lloyd Wright Home and Studio, tour the district to immerse yourself in the architecture of over 20 homes and Unity Temple designed by Wright. The city also has pleasant parks like Scoville Park to relax and stroll, specialty shops to satisfy the shopper in you, and art galleries and public art to enjoy.