Editor’s Note: On July 7, 2019, eight Frank Lloyd Wright landmark sites in the United States were collectively inscribed on UNESCO’s World Heritage List as “The 20th-Century Architecture of Frank Lloyd Wright”. Unity Temple in Oak Park, Illinois, is one of them. Other sites included on the list are Taliesin West, the Frederick C. Robie House, Taliesin, Hollyhock House, Fallingwater, the Herbert and Katherine Jacobs House, and the Solomon R. Guggenheim Museum.

I’ve admired the work of architect Frank Lloyd Wright for many years and have seen several of the homes he designed, including Robie House and the Rookery Building in Chicago, Taliesin in Wisconsin and his own home and studio in Oak Park, a Chicago suburb. 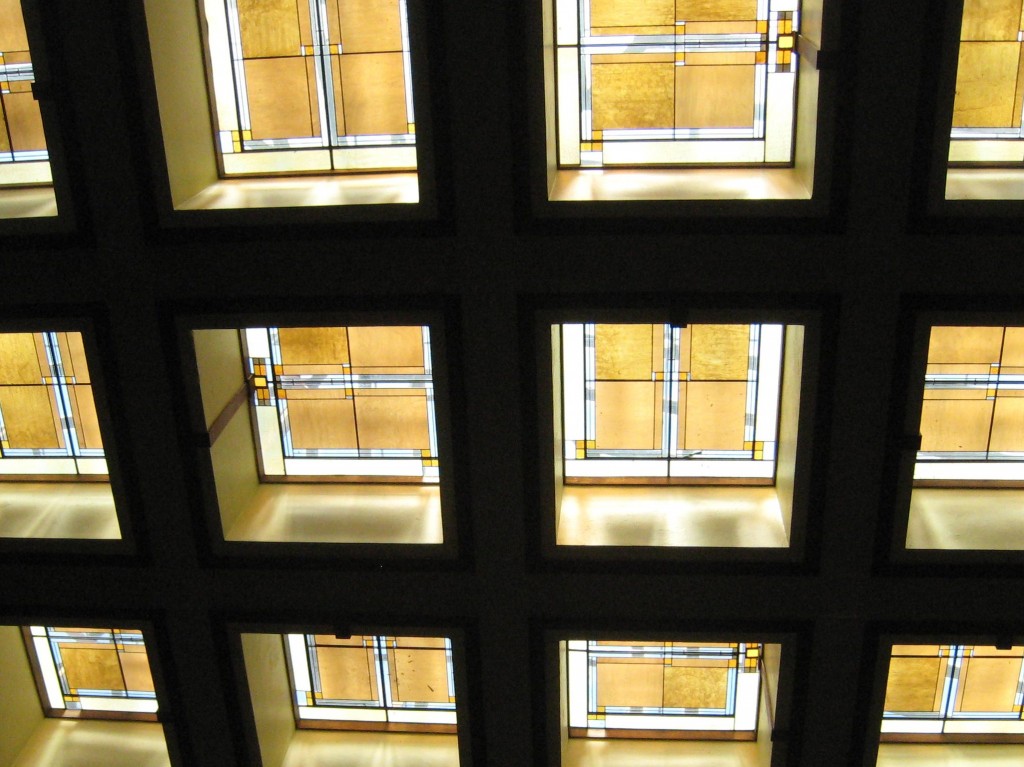 I’m neither a design expert nor a student of architecture. I just know that I like Wright’s distinctive “prairie style” and geometric shapes, lines and patterns. I like the comfortable interiors of the homes with their fireplaces, woodwork, natural lighting and use of livable space. 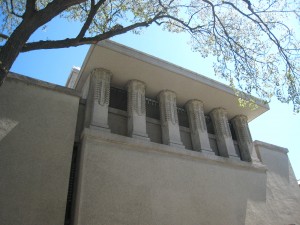 Wright also designed significant public buildings in his career and on a recent trip to Chicago I visited one that is considered by many to be a stunning example of 20th century modern architecture.

A beautiful gem in the collection of Frank Lloyd Wright designs is Unity Temple in Oak Park which was built between 1906 and 1908. A ticket for the self-guided tour is $9.00 and allows you to roam freely through most areas of the building.

The exterior of the building itself is impressive, designed in Wright’s trademark “prairie style” design and influenced by the simplicity of ancient temples. 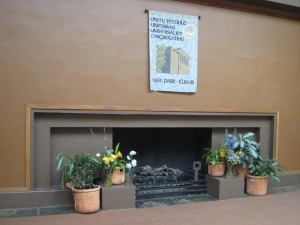 When you enter the foyer, you see glass doors ahead of you leading to a courtyard, to the right are social areas and classrooms, and to the left are the halls leading to the main area where services are held. Just as the hearth is a key feature in Wright’s home designs, it figures prominently in the social center of the temple.

As in all of the Wright buildings I’ve seen, there are interesting lighting and space transitions from one area to the next. The hallway and cloisters on either side of the main temple are dimly lit with low ceilings.

But as you turn to enter the sanctuary, you’re struck by the high ceiling, warm tones and natural light from windows and skylights.

There are elements of Japanese-influenced design in features such as the light fixtures. 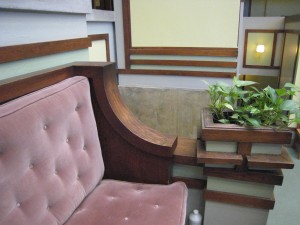 Whether or not you are a religious person, the temple is a place you may want to spend a few minutes in contemplation as you sit in one of the pews. 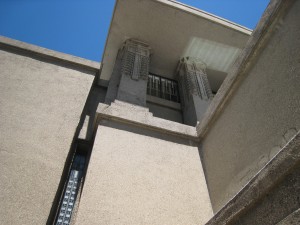 The National Trust for Historic Preservation put Unity Temple on their 2009 list of the 11 Most Endangered Historic Places in America. Although some projects are underway, funds are still needed for much more restoration and maintenance.