October, 2020 Update: After closing its doors in March, 2020 due to the COVID-19 pandemic, Frank Lloyd Wright’s Taliesin West reopened to the public on October 15, 2020.  For more information on tours (including a new self-guided audio tour) and newly-implemented safety measures, visit the Frank Lloyd Wright Foundation website.

Long a fan of architect Frank Lloyd Wright, I’ve visited several of his homes and landmark sites like the Rookery Building and Robie House in Chicago, Unity Temple in the Chicago suburb of Oak Park, and Taliesin in Spring Green, Wisconsin. Now that I live in Scottsdale, Arizona, I have to admit I think it’s pretty cool that I’ve relocated to a city where a major thoroughfare is called Frank Lloyd Wright Boulevard which leads to Taliesin West, Wright’s winter home and architecture school. 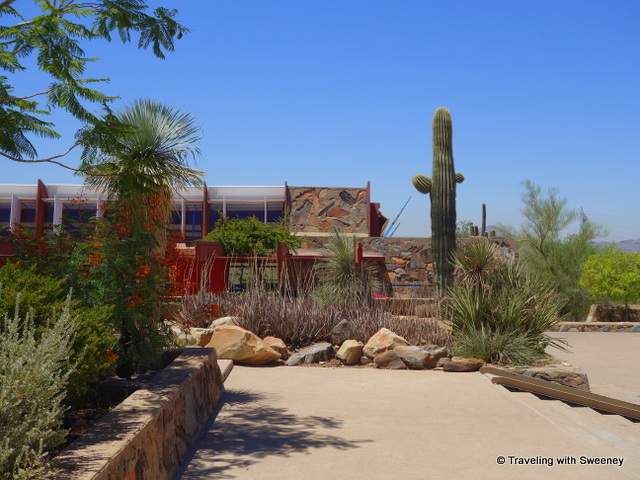 Highlights of a tour of Taliesin West

Architecture is man’s great sense of himself embodied in a world of this own making. It may rise as high in quality only as its source because Great Art is Great Life!” — Frank Lloyd Wright

On my visit to Frank Lloyd Wright’s Taliesin West, I took the  1-1/2 hour “Insights Tour”. It is a great introduction to the famous architect and his design philosophy with commentary and anecdotes added by the expert guides.

Frank Lloyd Wright is considered by many to be the greatest architect of the 20th century and the greatest American architect of all time. It may surprise you that he did not have a formal architecture education to reach his outstanding accomplishments and fame. Rather, he learned by doing, a key element of his philosophy that the aspiring architects of the Frank Lloyd School of Architecture at Taliesin are still following.

Frank Lloyd Wright was not a humble man. Our tour guide told us about a time in a court of law when Wright was asked to state his occupation. He responded that he was “the world’s greatest architect.” Explaining to his wife later, he said, “I had no choice, Olgivanna. I was under oath.”

His level of self-confidence and arrogance was also seen in his surprise inspections of homes he had designed to see what the owners had done to his houses and insist upon changes that met with his approval.

A look over the rim of the world! Just imagine what it would be like at sunrise or at sunset with cloudless sky in outlines ever devised, neither let or hindrance to imagination — nothing to imagine beyond the reach of the finite mind.” — Frank Lloyd Wright to his wife Olgivanna Lloyd Wright in 1936 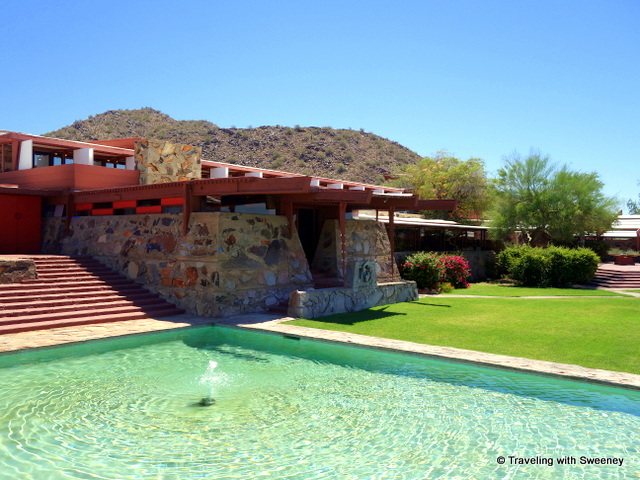 Wright coined the term “organic architecture” to characterize the harmony between design and nature. That philosophy is evident in Taliesin West’s design where the buildings, grounds, and decorative touches are part of the rocky Sonoran Desert landscape. 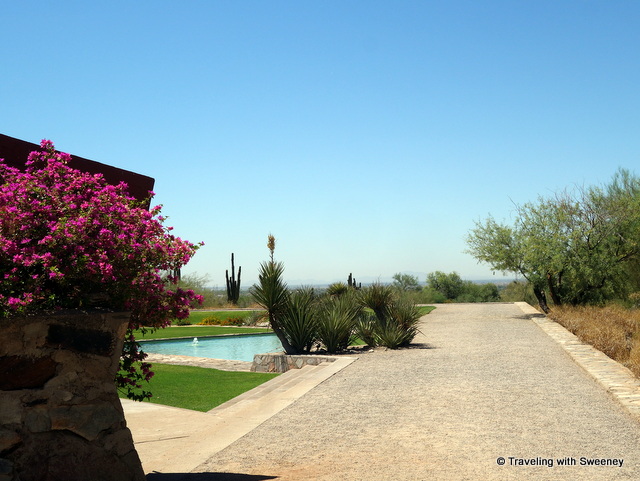 Prow of the ship landscape design at Taliesin West

Wright described the desert as being like the bottom of the ocean and so designed the front of the property overlooking the valley to be like the prow of ship. 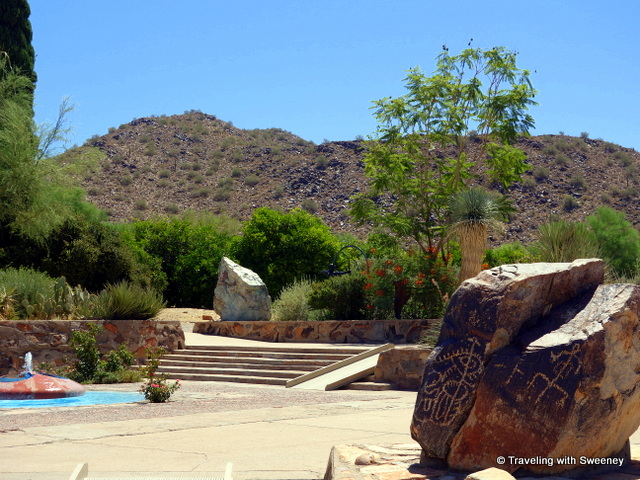 Petroglyphs are found throughout Taliesin West

Consistent with other Frank Lloyd Wright sites I’ve visited, there are many interesting surprises to be discovered in addition to the signature design elements in the private living quarters and on the grounds of Taliesin West. Wright was fascinated by the petroglyphs (shown in the photo above) of the area and positioned several of them throughout the property. 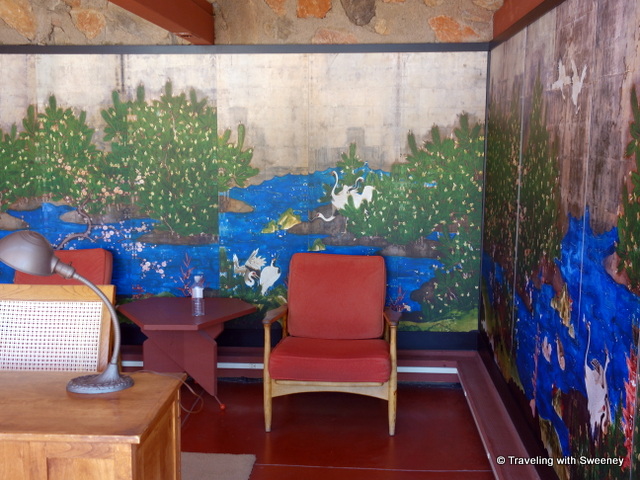 Wright also had an affection for Japanese prints and Chinese ceramics which are seen throughout Taliesin West. 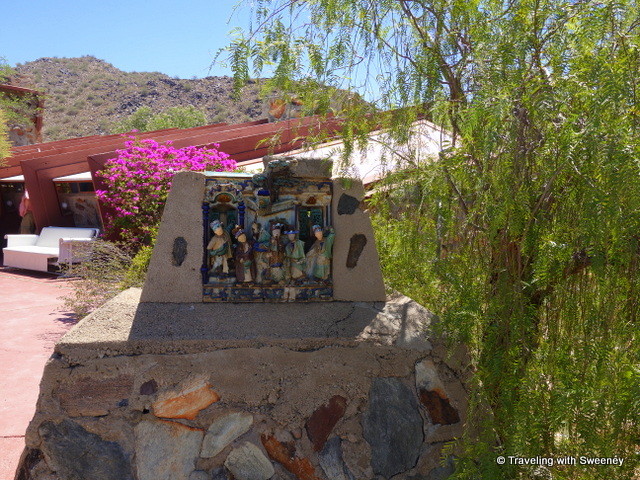 Asian ceramics at Taliesin West are placed throughout the property

Inside of Frank Lloyd Wright homes, I’ve always felt that I was in a unique work of art. My favorite part of Taliesin West’s interior was the Garden Room, a large gathering place for Wright, his wife, and their guests with views of the spectacular desert scenery through the windows. 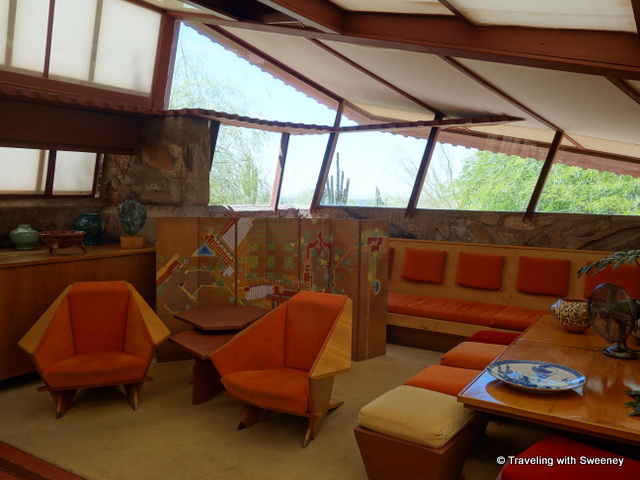 South end of the Garden Room at Taliesin West

I was fascinated to learn about Wright’s deep interest in music and his belief in the synergy between music and architecture. In fact, Wright was influenced by Beethoven in how he approached his designs seeing the same innovative talents to be necessary for creating great music or architecture.

It is in the music pavilion of Taliesin West where Wright’s apprentices were required to do weekly musical performances to express their artistic skills, learn social skills and gain self-confidence. 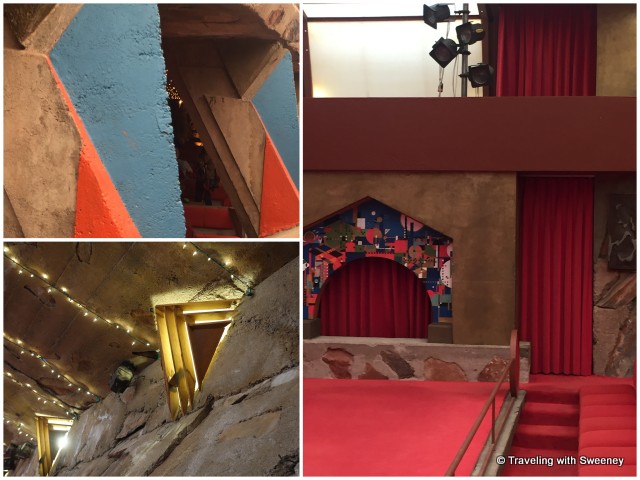 Left: Exterior and interior walls and ceiling of the cabaret — Right: Inside the Music Pavilion

Influenced by European cabarets, Wright designed his own cabaret theater at Taliesin West. Due to the room’s hexagonal shape and rock and concrete materials used to build it, the acoustics in this entertainment venue are said to be 95% acoustically perfect.

The longer I live the more beautiful life becomes. If you foolishly ignore beauty, you will soon find yourself without it. Your life will be impoverished. But if you invest in beauty, it will remain with you all the days of your life.” — Frank Lloyd Wright

On July 7, 2019, eight Frank Lloyd Wright landmark sites in the United States were collectively inscribed on UNESCO’s World Heritage List as “The 20th-Century Architecture of Frank Lloyd Wright”. Taliesin West in Scottsdale, Arizona, is one of them. Other sites included on the list are Unity Temple, the Frederick C. Robie House, Taliesin, Hollyhock House, Fallingwater, the Herbert and Katherine Jacobs House, and the Solomon R. Guggenheim Museum. 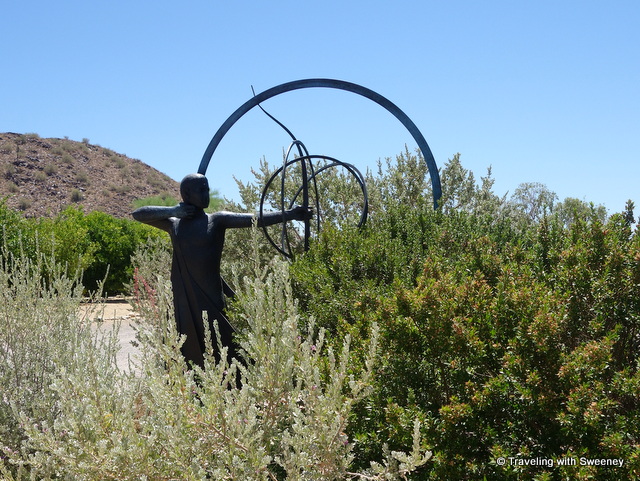 Sculptures on the grounds of Taliesin West

26 thoughts on “Nature and Architecture in Harmony at Taliesin West”