Arizona’s Sonoran Desert has long been a source of inspiration for artists, architects, writers, and dreamers. One of the most famous of  desert dwellers was Paolo Soleri (1919 – 2013), the renowned Italian-born architect, artist, and urban planning visionary. On a recent visit to Cosanti in Paradise Valley, Mr. TWS and I had a mini immersion into the innovative world of Soleri. It is here that he designed, constructed, and experimented with techniques counter to the norms of established architectural and community planning philosophies. Today, the artisans of Cosanti carry on his design and production of ceramic and bronze bells, a passion Soleri developed during a five-year architectural project in Italy.

Soleri — A free spirit “against things”

The name “Cosanti” comes from the combination of the Italian words cosa and anti which translate as “against things” in English and describes quite well the forward-thinking spirit of Soleri. Cosanti is listed as a cultural site on the Arizona Registry of Historic Places for its unusual earth-casted structures with barrel shaped roofs on the property. These structures comprised Soleri’s sculpture studio and home as well as the communal living quarters of his apprentices. Soleri’s designs were constructed with simple materials and construction techniques in keeping with his philosophy of “arcology”, blending architecture and ecology.

Arcology, architecture and ecology as one integral process, is capable of demonstrating positive response to the many problems of urban civilization, population, pollution, energy and natural resource depletion, food scarcity and quality of life. Arcology recognizes the necessity of the radical reorganization of the sprawling urban landscape into dense, integrated, three-dimensional cities in order to support the complex activities that sustain human culture. The city is the necessary instrument for the evolution of humankind.”   —Paolo Soleri

A visit to Cosanti

Perhaps you’ve seen the gorgeous bronze wind bells like those shown in the photos below when you’ve visited the Phoenix Metro area. We often see Soleri bells of various sizes dangling from trees in front of homes, on prominent display at resorts, and in public art spaces. Each of these works of art and skilled craftmanship is one of a kind treasure. 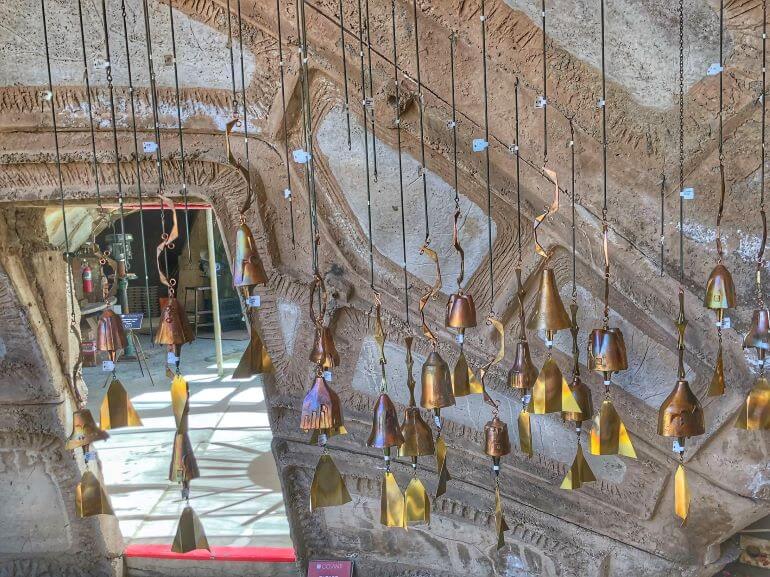 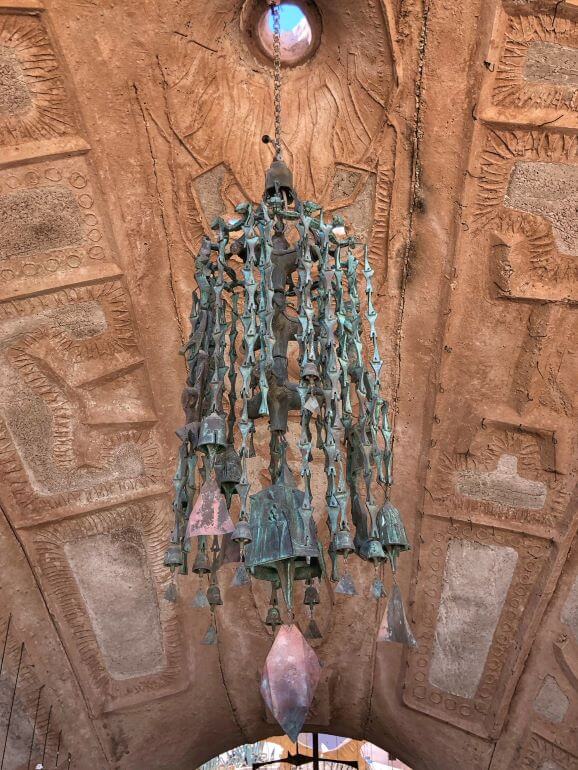 Shown in the photos above and below are two amazing bell assemblies. They are examples of the larger works produced at Cosanti. 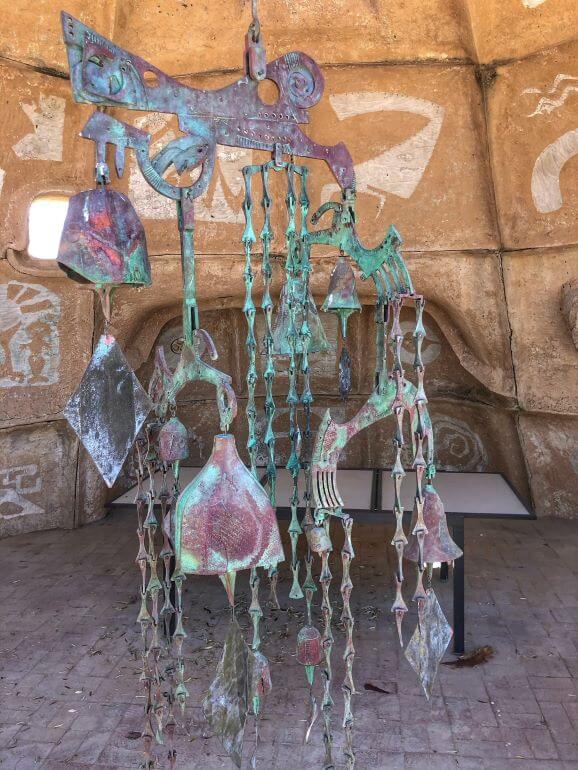 The structures of Cosanti served as his experiments with passive solar heating and cooling techniques. The tunnel shown below, for example, provides a natural cooling breeze as one walks through it. 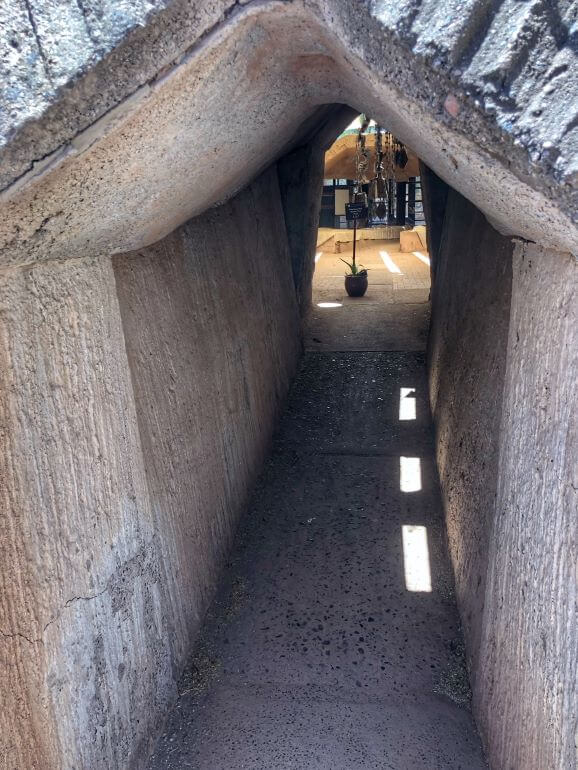 Entrance to Cosanti’s indoor and outdoor galleries and gift shop is free, but to walk around the property and see the bronze casting exhibit, you need to join a tour which we felt was very worthwhile. The one hour tour is enough time to explore the structures, foundry, artisans studio, and former living quarters. It’s a great way to learn about Paolo Soleri, see artisans in action as they work in the studio and mold the bells, and see the finished products. 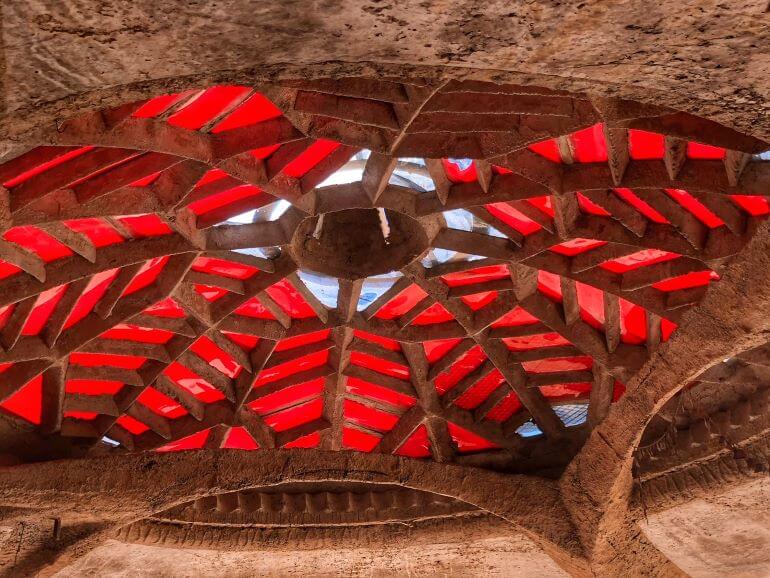 Tour tip:  There are currently two tours daily at 10:00am and 11:15am (weekdays) and 11:30am and 1pm (weekends). At the time of our tour, reservations could be taken by phone on the day of the tour. I called at 9:00 a.m. when Cosanti opens to make sure we could get a spot on one of the tours as capacity was limited to 12 people due to COVID safety measures. Check with Cosanti directly to find out about current requirements. 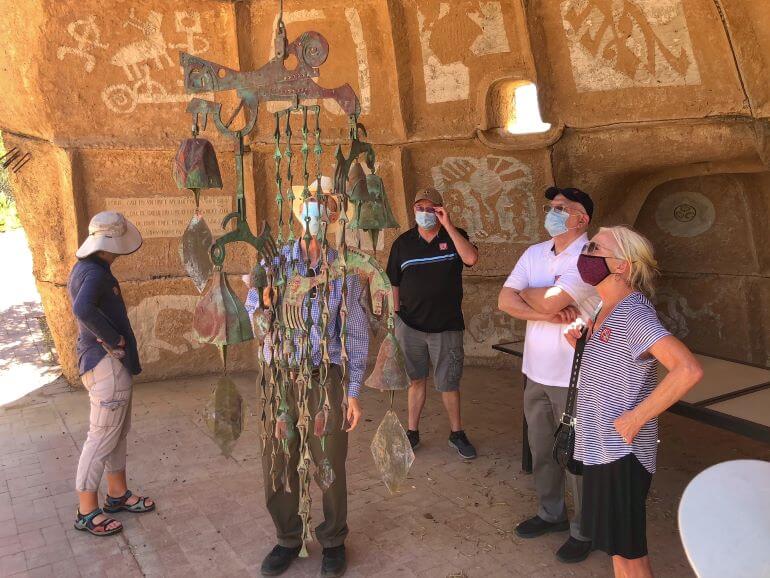 On our small group tour at Cosanti 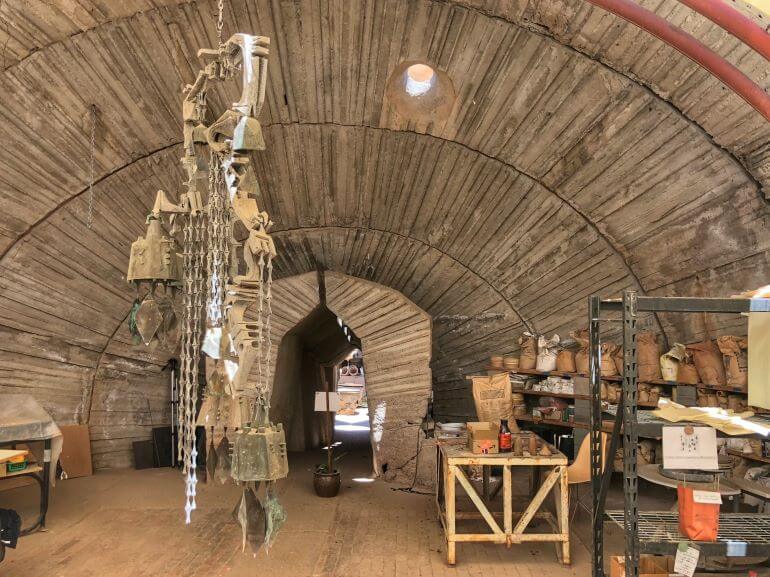 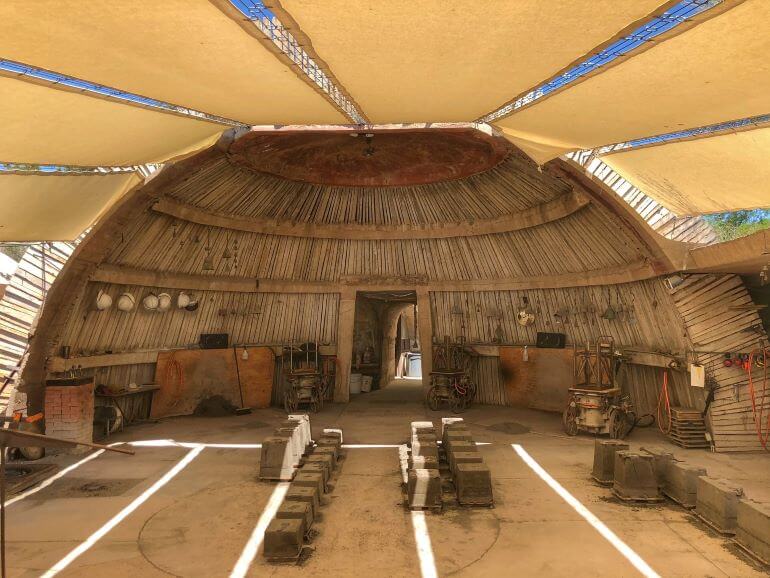 A highlight of the tour is an exhibition in the foundry where we watched the artisans pour molten bronze into the bell molds. They wear heavy coats, pants, boots, helmets and face shields while doing this hot work. I asked if they do this work throughout the extreme heat of the summer. I expected a “no”, but, indeed, they do this work all year round because of the high demand for the bells. 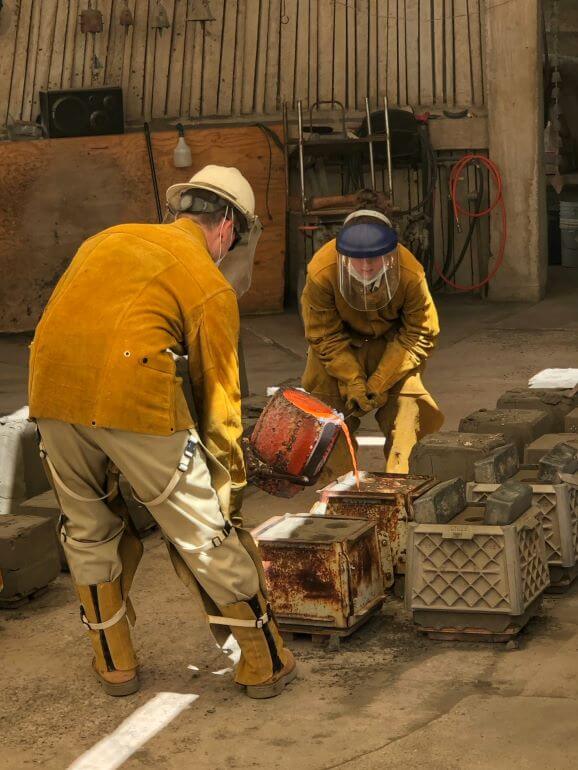 Molten bronze being poured in molds in the foundry

The former communal living quarters look a little rough these days, but it was easy to imagine a colorful hippie lifestyle when the apprentice program first started in the 1960s and young, enthusiastic apprentices were immersed in Soleri’s mentorship. As you might expect, there were reportedly some wild parties going on along with the dedicated work. 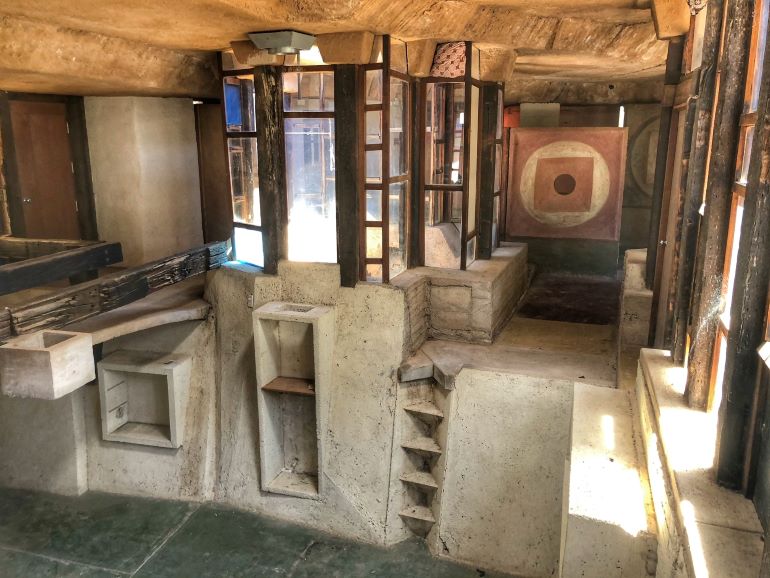 Soleri loved the Sonoran Desert and all of its sunshine. He was most often seen in shorts (very short shorts as we saw in photos on the tour) and sandals. Beneath the cement canopy in the photo below is a free form swimming pool which got much use in the heat of the desert summers. I can also picture Soleri, with apprentices gathered around, relaxing on the bench in front of the pool and discussing projects and new ideas. 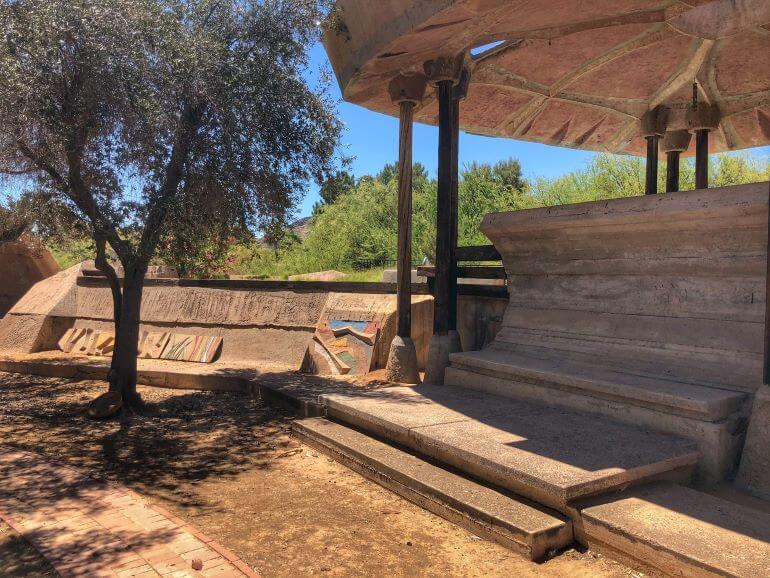 Before and after the tour, we spent some time browsing the beautiful bells and jewelry in the gift shop (shown below). A Cosanti bell is a great souvenir of a visit to the Phoenix/Scottsdale area and there are items of all sizes available. 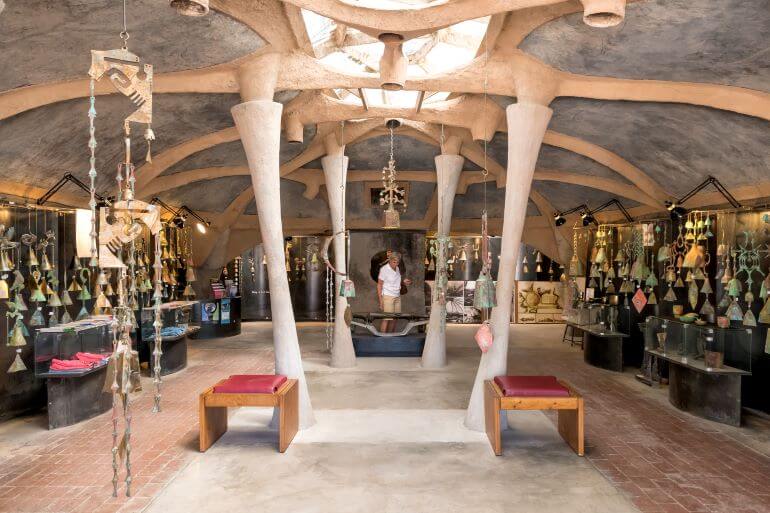 Soleri fist came to the United States in 1946 to be an apprentice with Frank Lloyd Wright at Taliesin West in Scottsdale. Although both believed in the importance of designing with nature and architecture in harmony, the two architects had philosophical differences causing Soleri to leave his apprenticeship. Wright’s focus was on designing single family homes in suburban settings, while Soleri envisioned urban life in compact communities built upward.

There are various stories about the rift between the two architects. I asked our guide if the two ever restored a relationship considering both were leaders in art and architecture in the same small (at the time) desert community. He said that after Wright realized that Soleri didn’t intend to take his apprentices away, the two got along just fine. But there are other impressions I’ve gotten that make the split seem more lasting and severe.

After leaving Taliesin West, he eventually took on a job to build a dome home in Cave Creek. It was while working on this project that he met his wife, the client’s daughter. They bought the property that became known as Cosanti in the 1950s and created the Cosanti Foundation.

Soleri never really thrived as a commercial architect. Rather, his passion and skills took him to pursue his urban planning ideals and sustainable ways of living in harmony with nature, influencing and educating followers worldwide. Soleri continued to live and work at Cosanti until his death in 2013.

Location tip: Cosanti is located at Doubletree Ranch Road and 64th Street, one mile west of Scottsdale Road, in the town of Paradise Valley, a lovely affluent residential and resort area between Scottsdale and Phoenix. It is quite hidden from view, so watch closely for the non-descript entrance among the trees.

Lunch tip: There are plenty of dining options near Cosanti, especially about a mile east of the property on Scottsdale Road. But for a great meal with great views, and a chance to see a large assembly Soleri bell, try elements (that is meant to be a small “e”), the restaurant at Sanctuary Camelback Mountain Resort about six miles away in Paradise Valley. The bell installation is outside the resort’s main entrance.

Mr. TWS and I have not yet visited Acrosanti, Soleri’s large self-sustaining alternative community north of Phoenix, but it is high on our list — especially after visiting Cosanti where Soleri planned for its construction.

The Soleri Bridge is a pedestrian bridge across the Arizona Canal in the popular Scottsdale Waterfront area. At the south end of the bridge, Soleri Plaza, hangs the Goldwater Bell cast by Soleri in 1969. 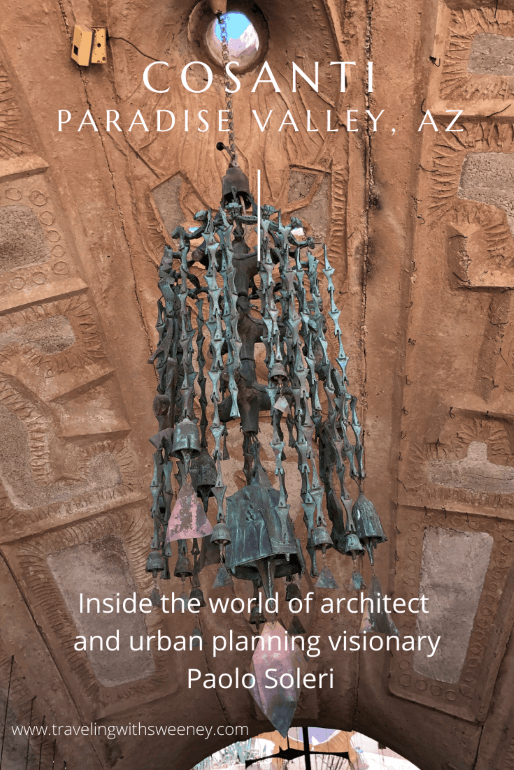 4 thoughts on “Cosanti: The “Against Things” Spirit of Soleri”