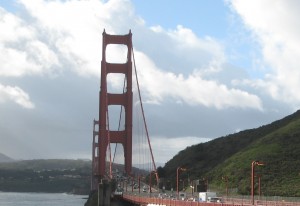 I’ve driven north from San Francisco to Santa Rosa hundreds of times. It’s a place that is very special to me ever since I first visited from Illinois when I was nine. Later, my parents lived there for many years and their home was the scene of countless celebrations of holidays and special occasions. My trips to Santa Rosa are now infrequent, but last week I hit the road to meet my niece for lunch to celebrate her birthday.

Santa Rosa is about 55 miles north of San Francisco on Highway 101. Although it’s a busy freeway, the drive includes long sections of pretty rural scenery. Every stretch of the road is familiar to me, but I try not to take for granted the sights along the way, starting with the beautiful Golden Gate Bridge, from where you’ll often see cargo ships and sailboats below on the bay. Once, I was stopped in traffic in the middle of the span just as the U.S. Navy’s Blue Angels were flying over San Francisco Bay performing their amazing stunts during Fleet Week. It was quite a thrill. 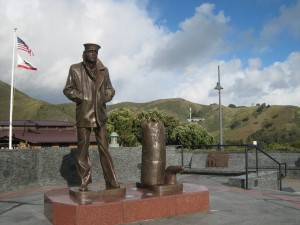 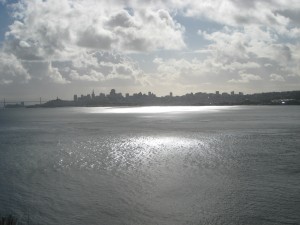 I stopped at Vista Point on the north end of the bridge for views of the Golden Gate and Pacific Ocean to the right; and the city, Oakland Bay Bridge and Alcatraz to the left. I like the Lone Sailor Memorial located there. Its plaque reads, “Here the sailor feels the first long roll of the sea, the beginning of the endless horizon that leads to the far Pacific.” 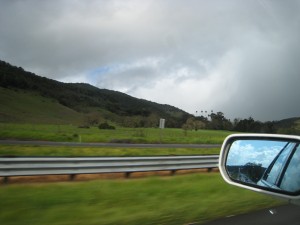 Up the hill from Vista Point is the Waldo Tunnel (known as the Rainbow Tunnel because of the multi-colored rainbow design above the entrance). The rest of the drive takes you through Marin County and winds through the hills of Sonoma County, a luscious green this time of year, passing dairy farms and ranches for much of way to Santa Rosa. As you get closer, you start to see vineyards on the hillsides. Santa Rosa is the gateway to Sonoma County wine country with vineyards to the west, north and east of the city. 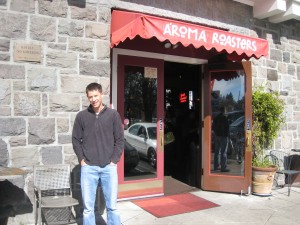 In Santa Rosa, I met travel writer friend, Dave Thompson of Dave’s Travel Corner, a lifelong resident of the area. We met at A’Roma Roasters Coffee and Tea, the oldest roastery in Sonoma County, in Santa Rosa’s historic Railroad Square. I always enjoy hearing about his latest adventures. He had just returned from a three-month excursion that took him to Thailand, Japan, China, Sri Lanka, the Maldives and Brunei. He’s been to Thailand many times and actually met his wife in a small village there 11 years ago. Dave started his travel website in 1996 when he wrote about his harrowing mountain climbing experience in Nepal. The experience inspired his passion for international travel and he has a particular love for adventure and mountain climbing. 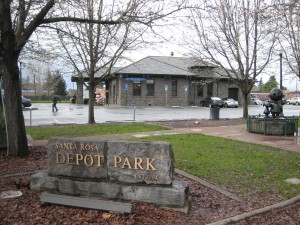 The café is located in what used to be the Railway Express Agency building, constructed in 1915, and is next to the train depot. Trains have not run through Santa Rosa for many years, but I learned from Dave the great news that SMART rail service from San Rafael to Santa Rosa is in the works and should be completed by 2014. I walked around the square noticing the many eclectic shops and restaurants. It was very quiet this morning in the rain, but it would soon be busy with the lunch crowd. Across Wilson Street from the station is Hotel La Rose which is listed with the National Trust Historic Hotels of America. It was built in 1907 by Italian stonemasons when the area was known as “Little Italy”. 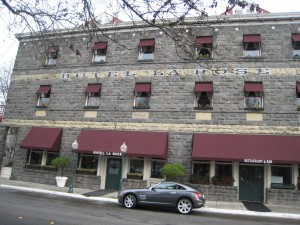 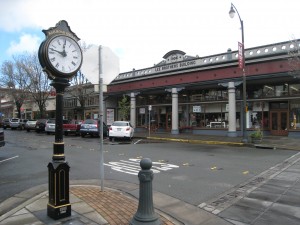 My niece and I had lunch at Monti’s in Montgomery Village. If you go there, try the crème brûlée for dessert. It’s near Sonoma Highway, which takes you east to some of Sonoma County’s finest under the radar and famous vineyards. Afterwards, we visited the Charles M. Schulz Museum. Schulz was the creator of the “Peanuts” comic strips and lived in Santa Rosa for 40 years. The museum opened in 2002 near Schulz’s art studio and his Redwood Empire Ice Arena (also known as “Snoopy’s Home Ice”) that opened in 1969. Charles Schulz would often spend time in the café at the arena and I saw him once while I was skating there. 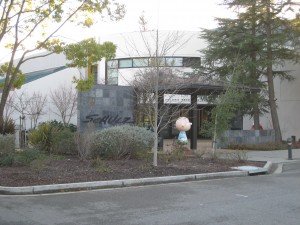 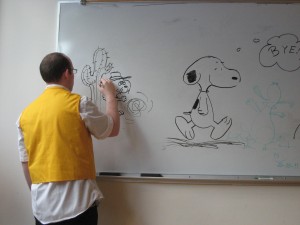 The museum’s collection has thousands of Schulz’s original “Peanuts” cartoon drawings dating back to 1950 up to his final ones created shortly before his death in 2000. There is an education center that has cartooning classes and a lot of activities for kids. We watched as an instructor drew Snoopy, Charlie Brown, Linus and Spike for us on the board. There are also many of Schulz’s personal artifacts, awards, and photographs on display. I particularly liked the replica of his office that includes his desk, drawing board, globe and shelves with books and memorabilia. 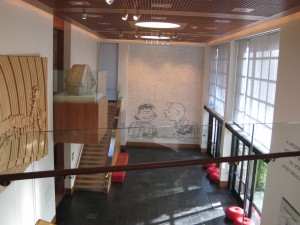 Driving south towards home in the late afternoon and exiting the Rainbow Tunnel, I got my first glimpse of the Golden Gate Bridge and the city. Beneath the bridge, a huge cruise ship was headed out to sea.

29 thoughts on “Family, Friends and Snoopy”

It’s music to our ears! The Musical Instrument M

Although St. Petersburg, #Russia is actually a ver

With cooler temps now here in the desert, we’re

A sentimental journey through the past — In my n

Good news for visitors and residents of the Phoeni

"... for better, for worse, for richer, for poorer

The allure of going places — in this case by tra

I like taking photos of Mr. TWS when he’s not ex

Thanks, @travelingjudi, for inviting me to the #wo

It’s not often I post animal photos, but thought

Oh, for the days of walking around the old city ce

We can do this! What a great idea by Dorothée Lef

We call it the “red minute” (and often the mou

Oh, the beauty of the Sonoran Desert! And if you i

Ah, the romance! One of many reasons that I will v

Took a little drive to Fountain Hills the other da

Reflections ... Remembering our veterans and falle