There are three things that I remember from my 4th grade Chicago history class: Mrs. O’Leary’s cow started the Great Chicago Fire, I got an A+++ on my Fort Dearborn model, and “Chicago” was a Native American word for “bad smell”. In 4th grade, that was pretty funny. However, I’ve since learned that the Native American word is actually “Checagou” and more closely translates to “wild onions”. It’s also debatable about Mrs. O’Leary’s cow. But I really did deserve the A+++ on the Fort Dearborn project. OK, my parents helped me… a lot. On my last trip to Chicago, I decided to see how much more I could learn at the Chicago History Museum. 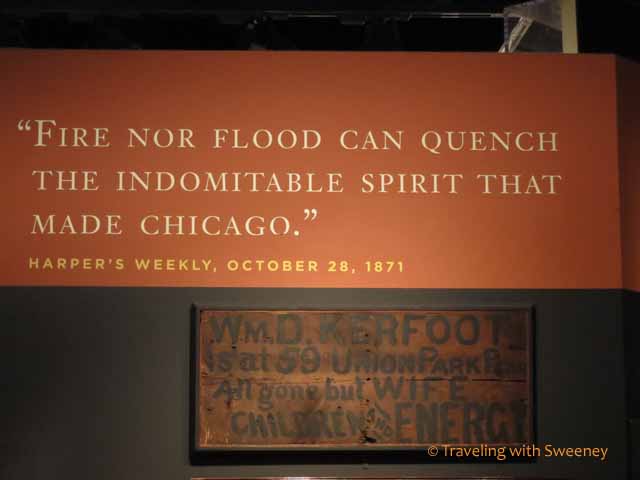 Chicago has a rich history that goes beyond my faded 4th grade memories, one that tells of a range of events and cultural influences that are tragic, uplifting, ground-breaking, controversial and even very cool. The Chicago History Museum (until 2006 known as the Chicago Historical Society, founded in 1856) takes you back in time through the city’s early days to the present as it experienced disasters, crises, achievements and growth.

The museum has much detail available in exhibits with interactive displays, audio and video presentations, artifacts, and educational materials. It wouldn’t be possible in this post to adequately describe the permanent and special exhibitions or the people and events that shaped the city in any detail. Hopefully, these few highlights will give you an idea of what to expect in a visit to the museum, which is something I highly recommend when you’re in Chicago.

Was Mrs. O’Leary’s Cow to Blame? 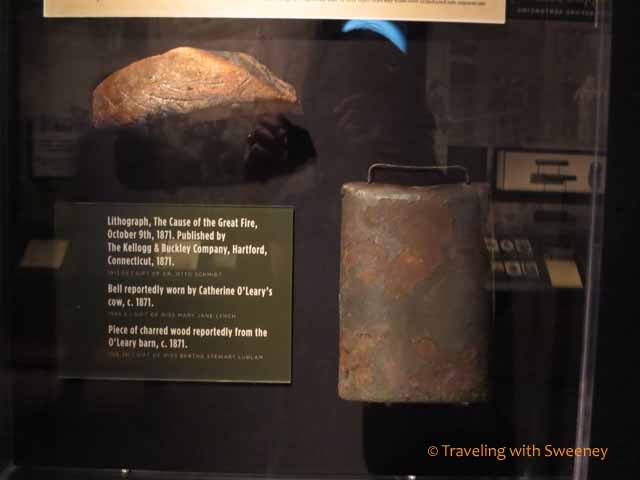 Is it true that the Great Chicago Fire of 1871 was started by Mrs. O’Leary’s cow kicking over a lantern in the barn? Investigations afterwards proved that the fire did start at O’Leary’s farm, but historians are not so sure that the cow was to blame. Whether it’s true or just urban legend, it has made for a good story all of these years. Ironically, the O’Leary home was spared from the devastation of the fire. Also interesting is something I learned from my Chicago fireman father — the current Chicago Fire Academy is located on the site where the O’Leary home stood. How cool is that? 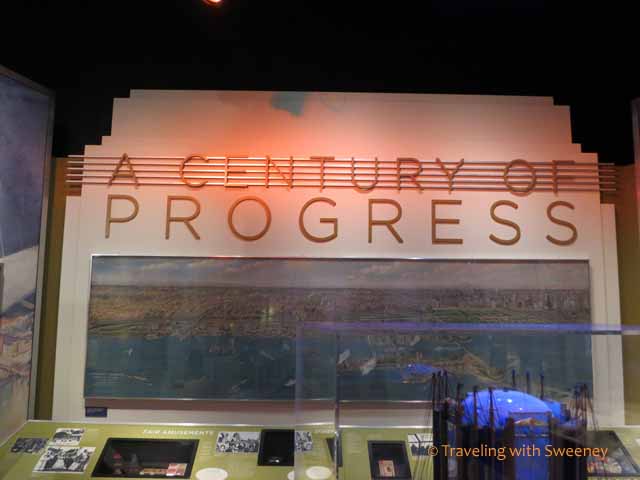 The World’s Columbian Exposition in 1893 was set in Jackson Park and celebrated the 400th anniversary of Christopher Columbus’s landing in America. Many new inventions, such as the Ferris Wheel, were introduced at the exposition and innovative architecture and landscape designs created for the fair are still admired in Chicago today. Forty years later in 1933, Chicago hosted another international fair, A Century of Progress International Exposition, commemorating the 100th anniversary of the city of Chicago. The fair, held on 427 acres along Lake Michigan just south of downtown showcased how business, science and government could create a better future. During a time of economic crisis, this was a big success and popular with the public. In addition to featuring modern advancements and predicting future developments, there were plenty of rides, entertainment, and concessions. My mom and aunt talked often about the thrill of attending the fair as young girls. 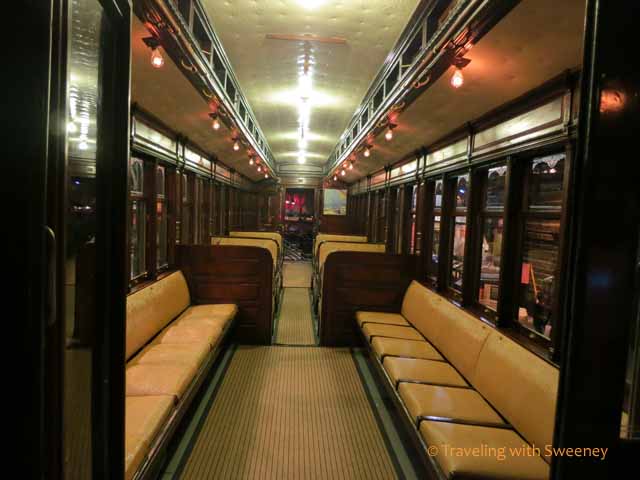 Built in 1892, ‘L’ Car No. 1 was in the first fleet of steam-powered rail cars on Chicago’s elevated railway and carried passengers between the Loop and the fairgrounds at Jackson Park. It was in operation until the 1930s, so its highly probable that my grandparents and mother rode in this very car at some point since that’s on a route they would have taken. I appreciated a little quiet time on board to think about that. 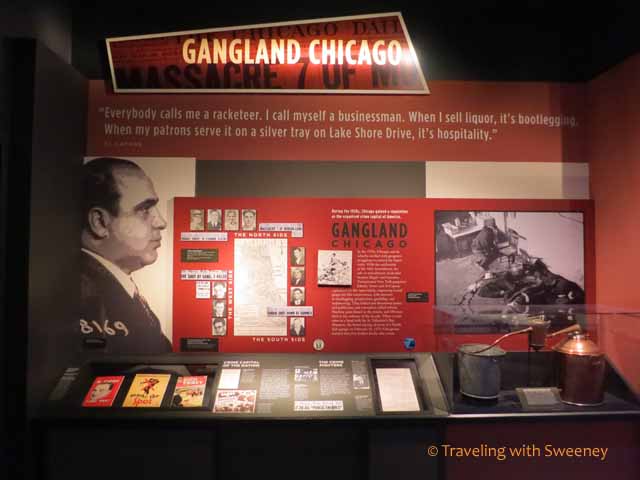 That’s right — Chicago gangsters were not fictitious characters created for movies. Notorious criminals like Al Capone gave Chicago a reputation as a dangerous city where the gangsters, not the law, were in charge. But even Al Capone was eventually brought to justice. 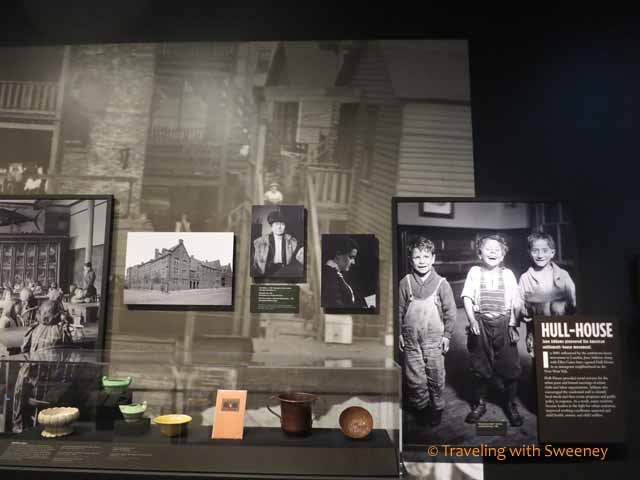 Hull-House was founded in 1889 by Jane Addams and Ellen Gates Starr as a social settlement that offered cultural and educational programs to new immigrants and the urban poor. I was sorry to learn that after so many years of providing services such as child care, domestic violence counseling and senior services, the Jane Addams Hull-House Association recently closed because they could no longer meet the demands for their services. The Jane Addams Hull-House Museum still operates and is located in two of the original settlement house buildings at 800 S. Halsted Street. 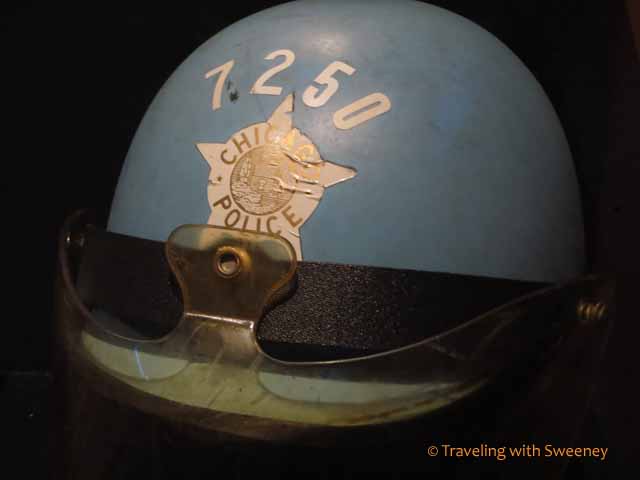 1968 was a year of turmoil and violence with the riots that followed Rev. Martin Luther King Jr.’s assassination and occurred during the Democratic Convention when protesters from around the country convened in Chicago to demonstrate against the Vietnam War. As the engineer of Engine #1 in downtown Chicago, my dad was called in for extended duty during those crises. I don’t think I realized at the time exactly how much danger he was in driving through the downtown streets and battling blazes in that chaotic environment. Much has been reported about these events, the actions of police and protesters, and the consequences. The museum has resources and artifacts available for looking deeper into these and other turbulent chapters in Chicago’s past.

Wait ‘Til Next Year 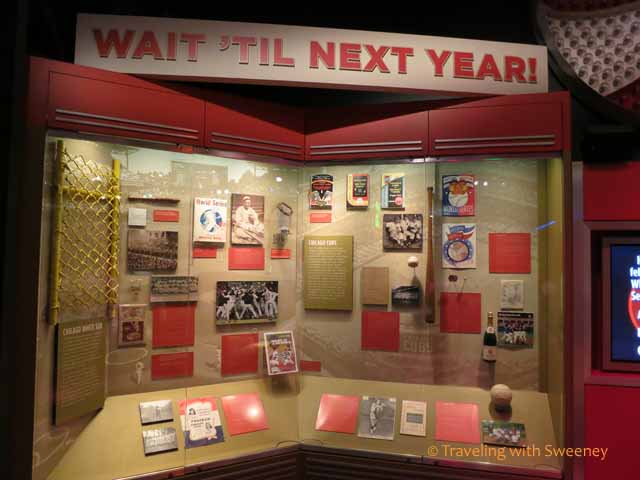 Wait ‘Til Next Year

Chicago is a big sports town and fans will enjoy the memorabilia in this section of the museum. When I lived in Chicago I was an avid Bears fan, even during some of the roughest patches for the team, I loved to watch the late Walter Payton (“Sweetness”) and other greats at Soldier Field a few times. My family comes from the South Side of Chicago where the White Sox rule, but many a Chicagoan has felt the sting of yearly disappointments for the Chicago Cubs. But they’re loyal fans and end the seasons with the adage, “Wait til next year!” 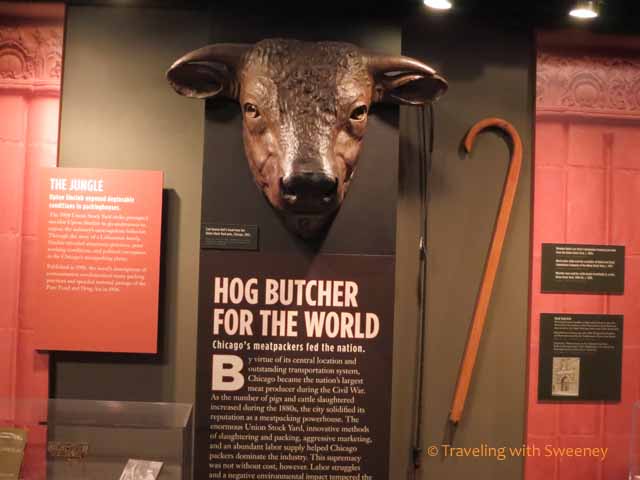 Hog Butcher For The World

The Chicago stockyards were the largest meat producer in the nation during the Civil War and its dominance grew even stronger during the latter part of the 19th century. This was largely due to the city’s central location which made it a major center of transportation. Other industries flourished as well.

Second City? Second to None

Whether it’s music, comedy or other performing arts, Chicago has long held a top spot. The Second City comedy and improv troupe has produced big stars over the years and is still performing in Chicago and around the country. The museum pays tribute to entertainment and broadcasting in Chicago with a wide range of musical instruments, posters and other artifact displays.

Since the 1920s, Chicago has been a capital of jazz and blues. There are many clubs today featuring local talent as well as national headliners. Before Lincoln Avenue became a trendy place to hang out, I lived on a stretch of that street north of Fullerton Avenue that had one of my “smoke-filled room” jazz haunts, Ratso’s (no longer there), and folk music venues. Great blues clubs were also nearby. I could often hear the music from Ratso’s and other clubs while in my apartment just a few doors away. The Back Room, still operating on Rush Street, was another favorite jazz place of mine.

Although the museum’s replica of a club isn’t quite the real thing, the exhibit provides some ambiance and the background on Chicago’s jazz and blues heritage is worth the time. 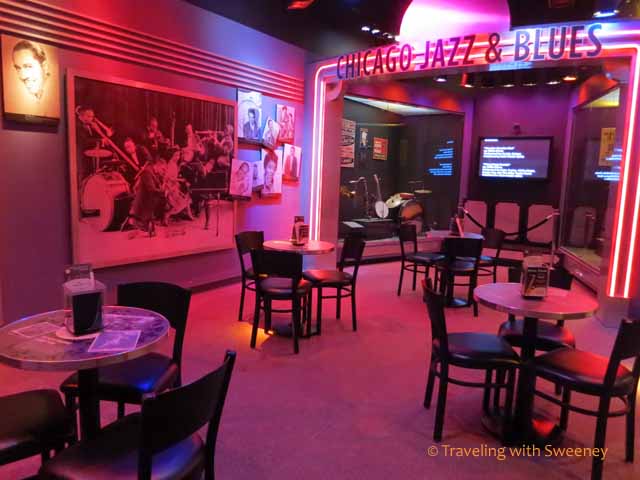 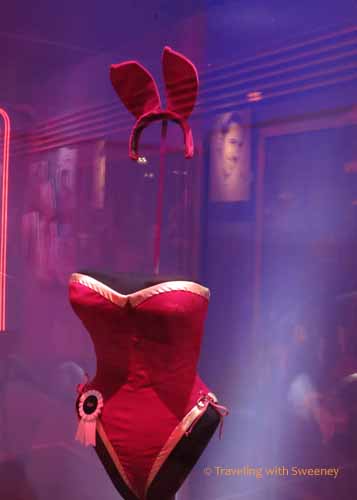 Hugh Hefner founded Playboy Magazine in Chicago in the 1950s and opened the first Playboy Club there in 1960. No matter how you might feel about the man, magazine or institution, Playboy is part of Chicago history. Bunnies working in the clubs wore “bunny suits” like this one on display with bunny ears, collar, cuffs and cottontail.

But there is so much more to examine and explore at the Chicago History Museum, so check it out when you’re visiting the Windy City. If you go:

The museum is located at 1601 N. Clark St. There is a parking lot one block north at LaSalle and Stockton with a discounted rate for museum visitors with validated ticket.

There’s a café next to the Chicago History Museum’s gift shop which looked quite nice, but I recommend that you experience some of the city’s delicious pizza, Mexican Street Food or other local favorites.