I’m not a “native Californian”, a title proudly shared by those residents who have lived in the state since birth. But I’m one of millions who have come here for a wide variety reasons: job opportunities, love, family, sunshine, natural wonders, or searching for fame and fortune. The Oakland Museum of California (OMCA) showcases the state’s history of attracting newcomers from early explorers to recent immigrants, as well as chronicling the lives of the native people who were here before them.

OMCA also presents California’s influence in the world, significant events, art, and natural sciences. There’s something for everybody — native Californians, newcomers, and visitors. 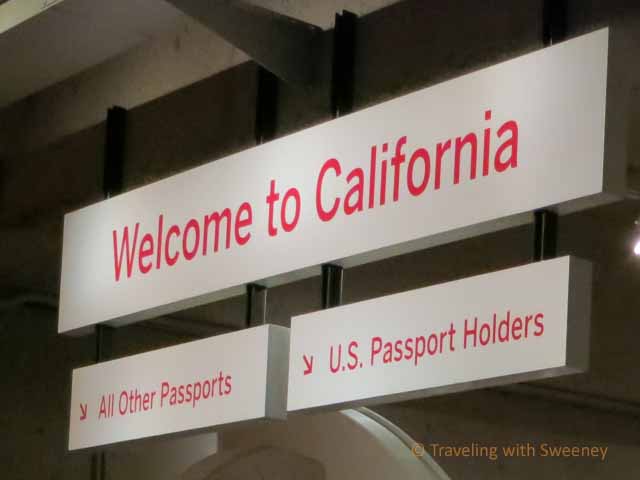 A Tour of the Oakland Museum of California

During a private tour by Oakland Museum of California docent Diana Nugent organized by Visit Oakland, I was impressed with the wealth of information, exhibits, artifacts, art and interactive displays of the museum. They’ve done an excellent job creating a vision of California history that showcases a multidisciplinary collection of 1.7 million artifacts, art works, natural specimens, and photographs. Special changing exhibitions and projects are also ongoing, including the “1968 Exhibit” organized by the Minnesota History Center which runs until November 25, 2012. The museum was created by the City of Oakland in the mid-1960s with the merger of 3 small museums — Oakland Public Museum, Oakland Art Gallery and the Snow Museum of Natural History — to be a “museum for the people”.

In the Gallery of California History, the theme is “Coming to California” with chronological exhibits exploring key historical aspects: the lives of the native people prior to the arrival of the early European explorers, Spanish colonization, independence, San Francisco’s 1906 earthquake and fire, wartime industries, and many others up to the present. The collections are exhibited in theatrical stage settings displaying authentic artifacts of the time. Many exhibits are interactive, allowing visitors to perform hands-on projects and apply their creativity. These are a just a few of the highlights from my visit.

The discovery of gold at Sutter’s Mill, about 35 miles northeast of Sacramento, spurred the California Gold Rush, one of the most famous periods of California history. People came from all over the country and abroad looking to get rich finding gold or starting businesses. Some succeeded and took their wealth to San Francisco, others had moderate success, and some experienced failure. Pictured below are gold nuggets and tools from that time. 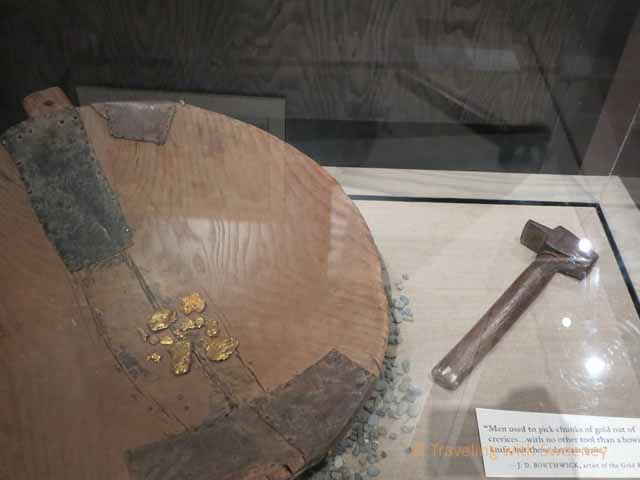 Gold Nuggets and Tools from the California Gold Rush

This exhibit of a typical kitchen in a post-Gold Rush permanent settlement includes authentic furniture, dishware and utensils. The projected image of the woman at the doorway really brings the setting to life. 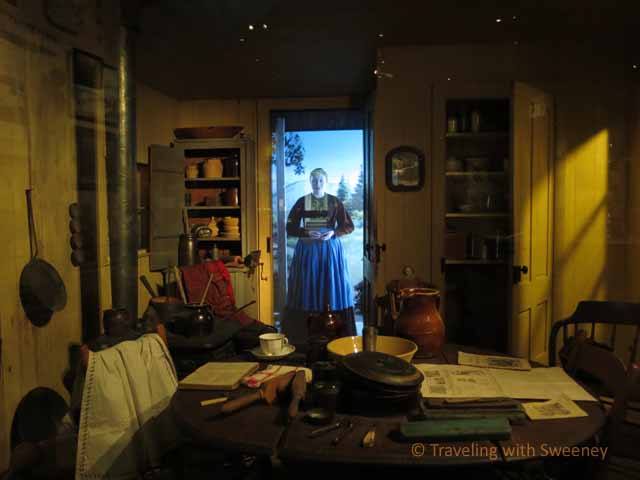 Kitchen in a Post-Gold Rush Settlement

The building of the the transcontinental railroad, which began in the 1860s, made California more accessible and provided additional opportunities. However, it was a very dangerous job for the workers (mostly Chinese immigrants) who built the tracks through the mountains using only basic tools and equipment. 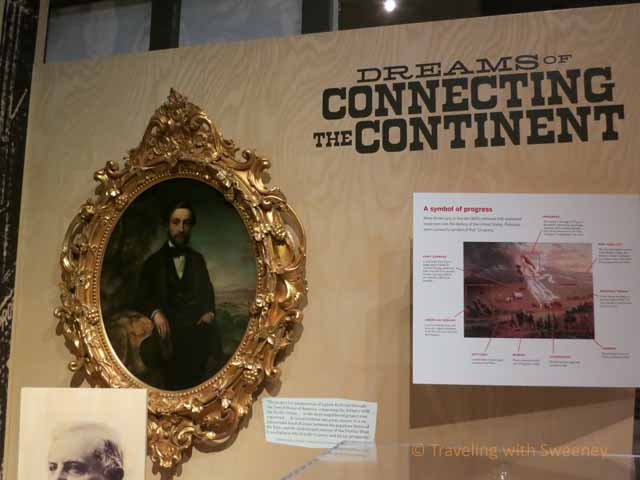 The Depression era brought many people to California seeking jobs and a better life. The Model T Ford shown below depicts how a typical family might have traveled to California. An interesting bit of trivia about this truck is that it was actually donated to the museum in excellent condition and had to be made to look dilapidated, a sort of “reverse restoration”. 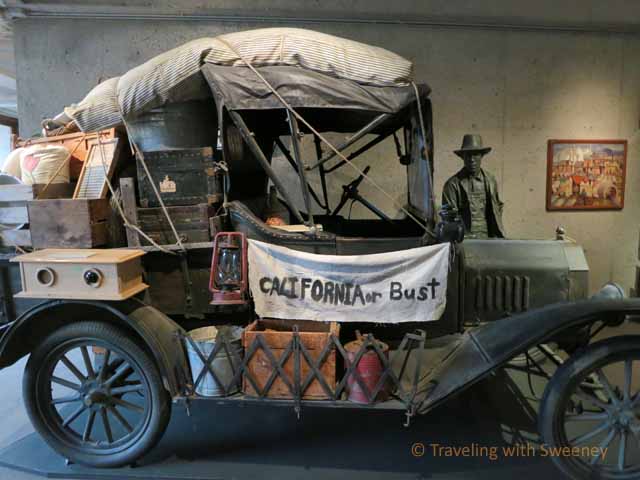 Sadly, many people just found disappointment and poverty when they got here. In Oakland, these concrete sewer pipes served as a refuge for about 200 people living in what was called “Miseryville” or “Pipe City”. One of the many interactive exhibits, this one lets visitors climb inside to get a feeling for what life must have been like for these people. 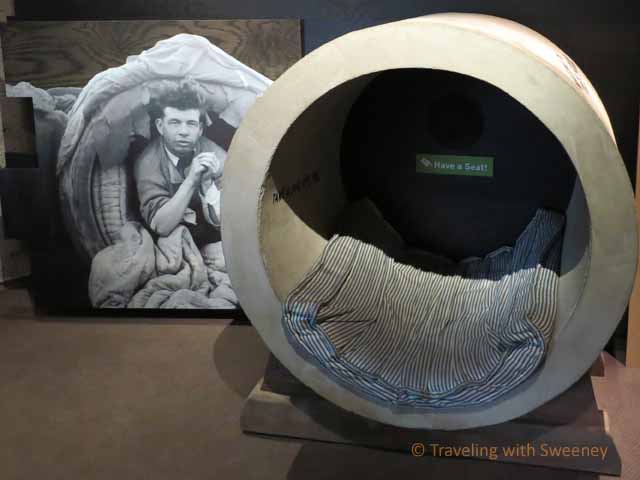 People often associate California with its extensive and complicated network of highways, although bike culture is particularly important and growing here. In the 1910s California had more cars per capita than anywhere else in the country and many people traveled by car from the east to visit the state, some in luxury touring cars like the one displayed. 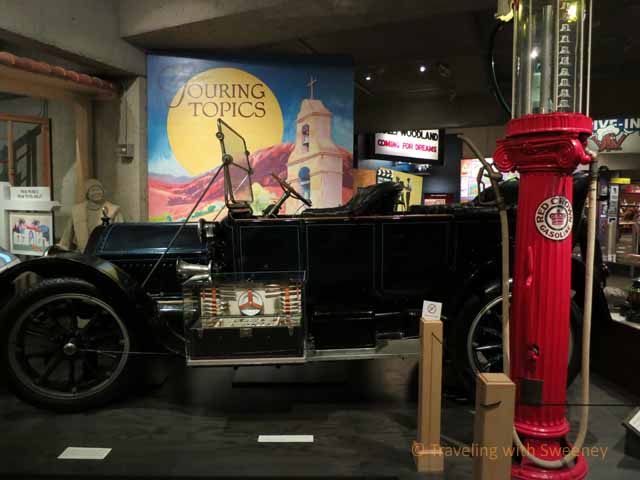 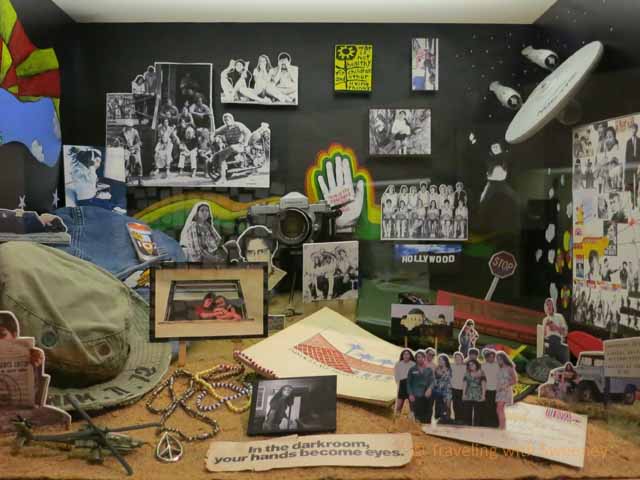 In the Forces of Change exhibit, elements of politics and counterculture from the period of 1960-1975 are memorialized in displays created by twenty-four Californians. Forces of Change reflects both individual and collective memories of those who experienced that era. 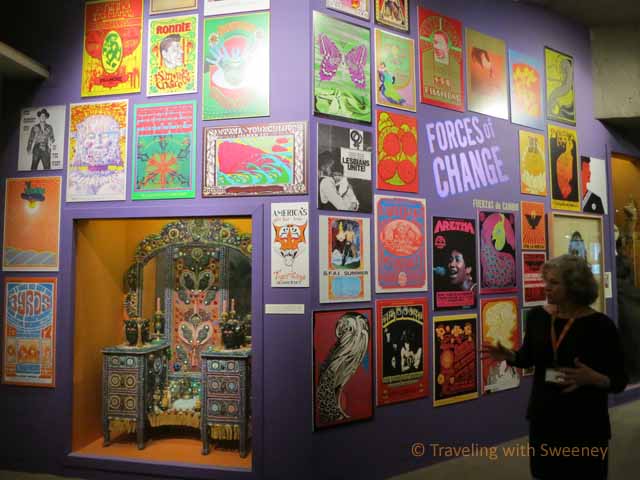 Whether you’ve ever dreamed of being a Hollywood filmmaker or just enjoy the movies, you’ll find the Creative Hollywood exhibit interesting and full of opportunities to test your talents in the animation studio, designing costumes, or adding sound effects to movies.

In addition to the rich history of early immigration to California from many countries, the current issues and questions surrounding our borders and immigration laws are presented in this educational and thought-provoking exhibit. 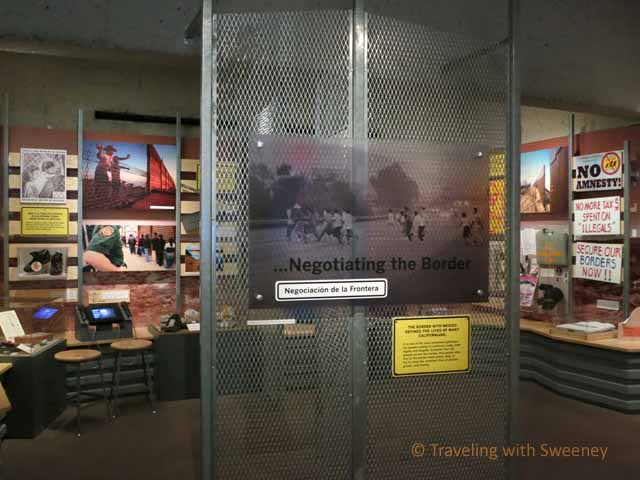 In this large and bright gallery, the disciplines of over 800 art works are diverse and all reflect some aspect of California’s land, people or creativity. Visitors can try their own artistic talents by drawing self-portraits. 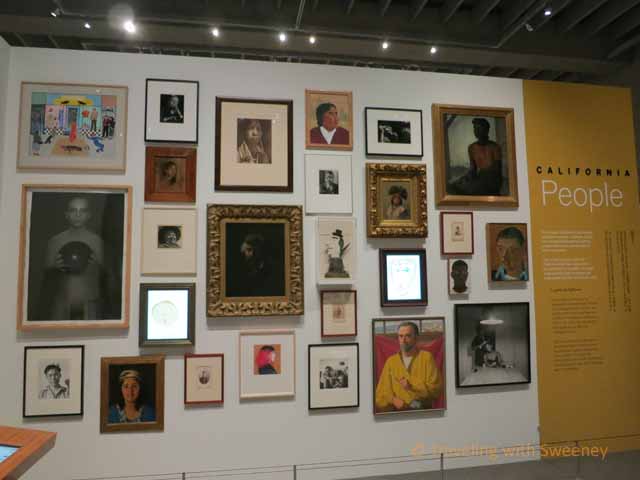 The Oakland Museum of California houses the archives of renowned Berkeley photographer, Dorothea Lange, one of the foremost photographers of the Great Depression. She captured the essence of the extreme hardships of the people during that time. Her poignant photograph, Migrant Mother, Nipomo, California (1936), hangs in the gallery. The archives also include 25,000 negatives, 6,000 vintage prints, field notes, and personal memorabilia. 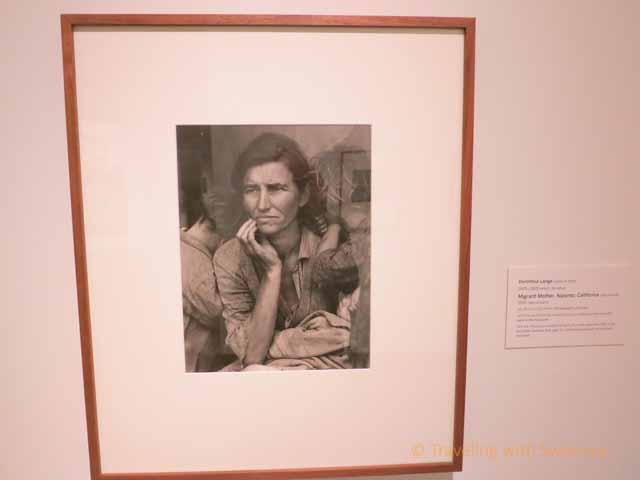 A Place to Think 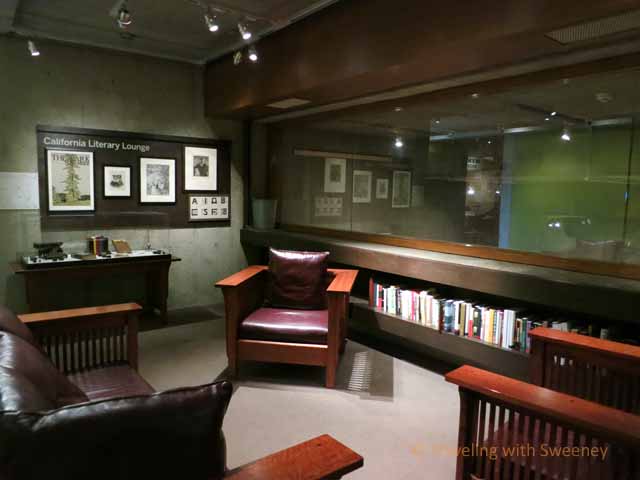 There are comfortable sitting areas throughout the museum, in the outside gardens and at the Blue Oak Café where visitors can rest, discuss the exhibits, have lunch, or just think about California’s heritage. The museum presents a full picture of the good, the bad and the controversial of California including issues that have defined the state, shaped its development and impacted the world — technological advances, culture clashes, suburban development, natural disasters, agricultural bounty, religious influences, war, politics and power. That’s a lot to think about. 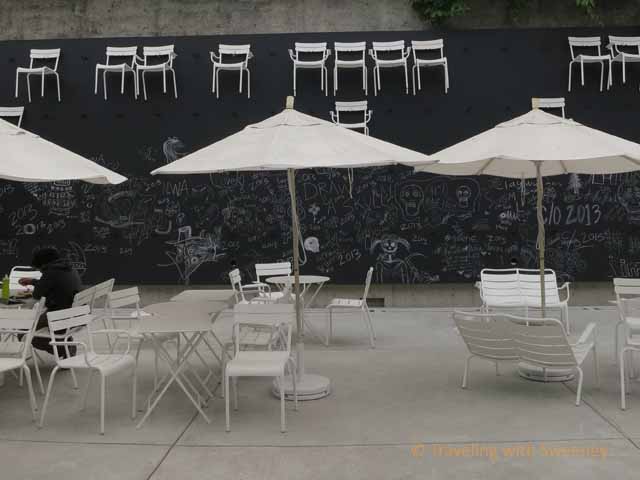 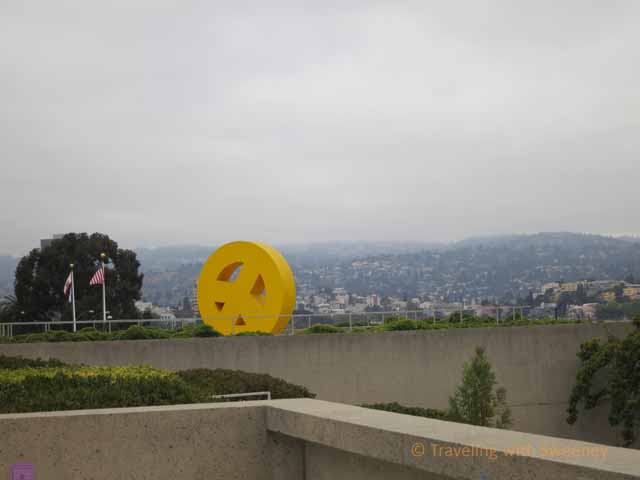 With a backdrop of lush landscapes and views of Lake Merritt and city landmarks, the building and exterior areas of the museum also reflect California’s spirit and style. The building was designed by award-winning architect Kevin Roche to be a community gathering place. The rooftop gardens and arboretum designed by landscape architect Dan Kiley integrate art, architecture and nature while the peace symbol sculpture signifies California’s activist culture.

There’s much to discover here about California’s rich history, culture and natural wonders and I highly recommend a visit to the Oakland Museum of California — whether you’re visiting the San Francisco Bay Area or if you’re a local looking to learn more about our state while exploring what else the city of Oakland has to offer. After 23 years of living in the San Francisco Bay Area, I’m finally discovering more about Oakland’s history, theaters, restaurants and attractions, including the thriving, innovative art scene I recently wrote about.