Things to do in Ferrara, Italy — on a short visit

It was a whirlwind of a day trip to Ferrara, Italy from our base in Verucchio. We started out early for our 2-hour drive to Ferrara, 90 miles to the north (about 30 miles from Bologna). We left the driving to our Italian blogger friend, Alessandra Catania, and so we were able to sit back and enjoy the passing towns and countryside through Emilia-Romagna. As we entered the city limits of Ferrara, we were caught up in quite a bit of traffic in this small busy  city of 135,000 residents, quite a change from the small villages and towns we had been visiting since arriving in Emilia-Romagna several days earlier. But before long, the modern city scenes and wide streets changed to views of buildings from eras past with pedestrians and bicyclists making their ways through the narrow streets and piazzas of old town Ferrara, a UNESCO World Heritage site.

Over a period of several hours, we took in as much as we could, but there is plenty more to do when we return. Come with us on this virtual tour of 5 interesting and fun things to do when visiting Ferrara.

Castello Estense, the bad and the beautiful

Ah, the stories of Medieval and Renaissance passion, treason, power, and torture that this castle holds. Built in 1385 as a fortress  to protect the ruling Este family from uprisings of the people, Castello Estense later became the royal residence. Its architectural details span Medieval and Renaisance periods as enhancements were made through the centuries. The water-filled moat still surrounds the castle.

In the photo below, we’re looking across the moat into the old town center of Ferrara through a loophole in the castle wall . Except for a bit of construction scaffolding and vehicles in view, it was easy to imagine a Ferrara of times long gone by. 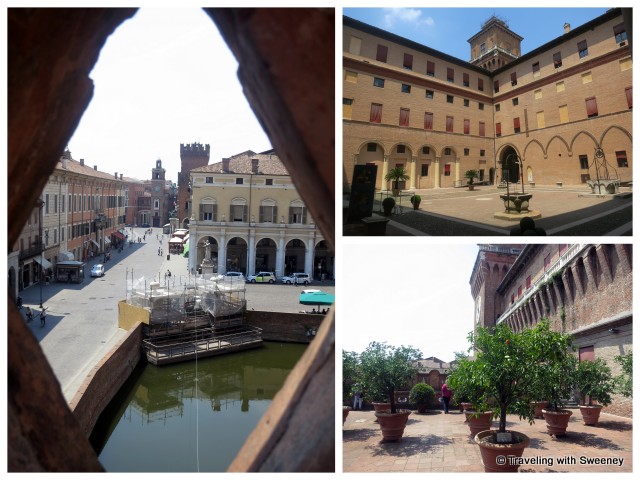 The interior of Castello Estense has many ornate halls and rooms in the noble living quarters on the first floor. It was the gorgeous ceilings that especially captured my attention in these chambers. Pictured below are just a few examples. 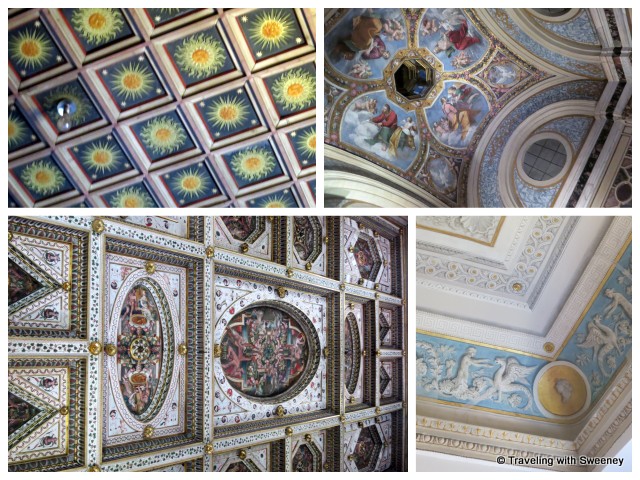 Parts of the castle suffered extensive damage during a major earthquake in May of 2012 so in some rooms the ceilings are speckled with tape used in the restoration process. Their beauty still shines through.

Ceilings damaged by earthquake in the process of renovation

So what could be  bad inside such a place of beauty? Beneath the opulent living quarters of the nobility, dungeons held high-profile prisoners in small cells with fascinating, yet terrifying history.

Imagine being held in captivity in the long, narrow cell in the photo below on the left. In yet other cells, we have the tragic story of the young lovers, Parisina and Ugo, Niccolo III’s second wife and son (Parisina’s step-son). After a period of confinement in the dungeons, they were decapitated at the castle in 1425. They were both 20 years old at the time. Ugo was held in the cell shown on the right below (a toilet was a special amenity in this cell). The ceiling shown in the top right photo shows the marks of prisoners’ writings made with candle smoke in that cell. 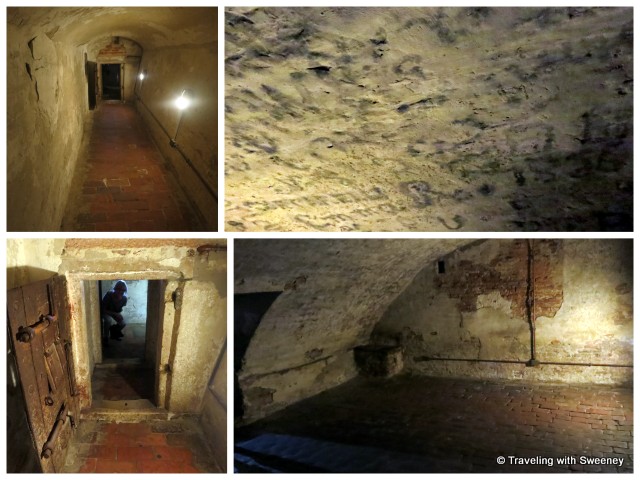 A larger area of confinement, but nonetheless daunting is the one shown below, where Don Giulio and Ferrante d’Este, brothers of Duke Alfonso I, were imprisoned in 1506. They were  accused of plotting against the duke and another brother, Cardinal Ippolito. Both had their sentences commuted, but not until Ferrante had spent 43 years and Don Giulio 50 years.  The release of the 81-year-old Don Giulio was a great surprise to the townspeople who reportedly watched him leave the castle and make his way down the street. 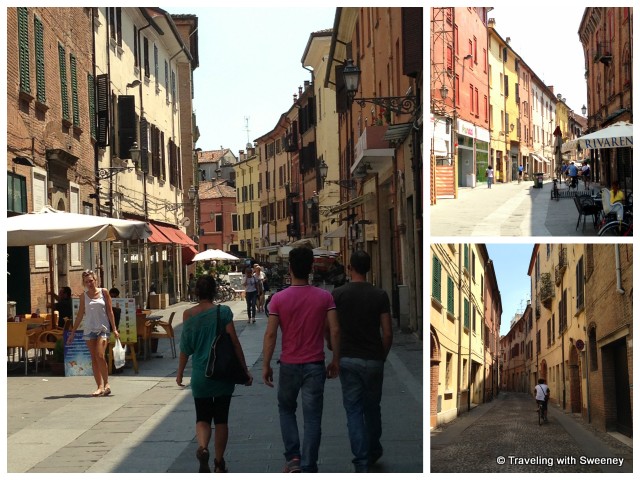 On first entering the former Jewish ghetto of Ferrara, we saw many people bustling in the street or sitting outside at restaurants for lunch. But turning down the side streets, things got much quieter. 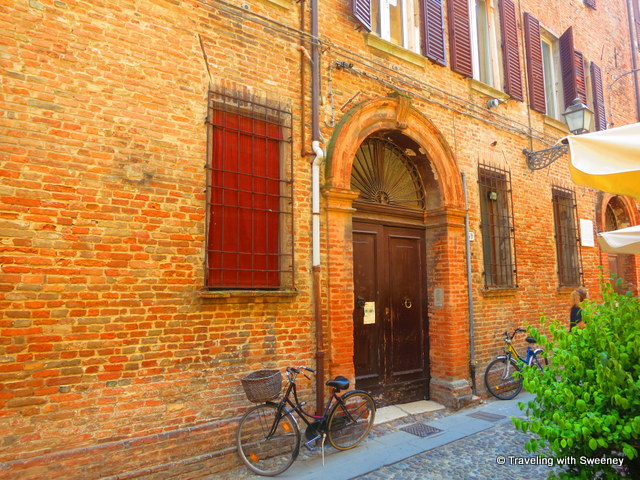 Intriguing building along a narrow street of the old Jewish ghetto

The Jewish community here goes back centuries. Many of the Jews that had been  driven out of their native countries were welcomed in Ferrara. Coming from Spain in 1492, Portugal in 1498, and Germany in 1530, they settled in the city building a strong community. The ghetto was established in 1627 by the papal government, ending the liberal policy of the Este family. 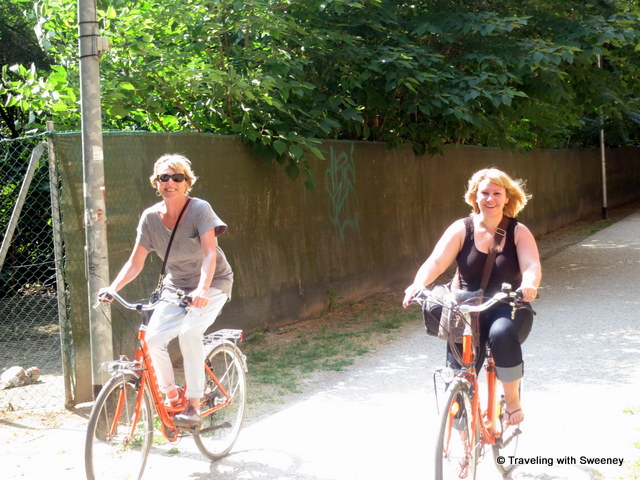 The bike culture in Ferrara is prevalent – residents and tourists alike pedal through the streets, squares and even around the 9k distance of the old city walls. It was a hot day (about 95 F), but I loved it. I enjoy biking, but weaving through the often crowded, narrow streets of a medieval  city, partially along the old walls, was extra special. There are a number of bike rental locations in the city center.

I was amazed by the rich collections of the National Archaeological Museum (MANFE) in Ferrara, located on the first floor of the Palazzo Costabili (also called Palazzo di Ludovico il Moro). The museum’s artifacts include Greek Attic vases, bronzes, jewelry and other Etruscan objects for ordinary use that were discovered in archaeological excavations in Spina, Italy. The close cultural ties between the city of Spina and the Greeks is evidenced by the large number of items with Athenian origins. 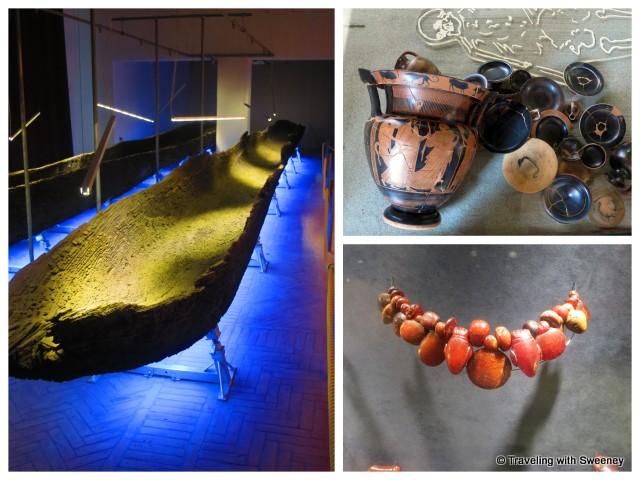 
Although we didn’t tour inside Ferrara Cathedral, we admired it from the piazzas on two sides of the stunning pink and white marble structure built in the 12th century. 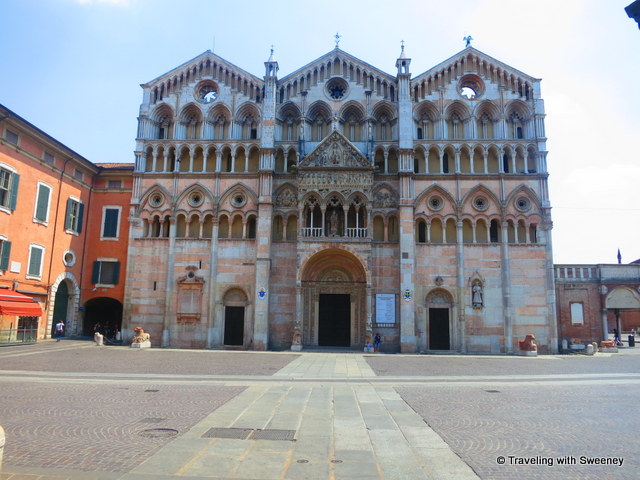 Above the door in the center of the cathedral, there are carvings of  St. George and scenes from the New Testament created by the sculptor Nicholaus in 1135. The lower part retains the cathedral’s original Romanesque style, while the upper part which was built  later in Gothic style. 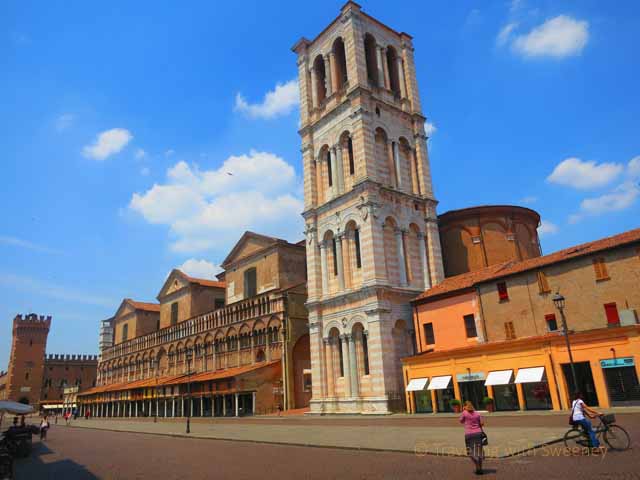 The imposing Renaissance bell tower is an unfinished work of  Leon Battista Alberti on the side of the cathedral facing Piazza Trento e Trieste, once the main town market of Ferrara. To the left of the tower are two galleries and small columns.  On the ground level is the Loggia of the Merchants which has been occupied by shops since Medieval times.

Before heading back to Verucchio for the night, we sat outside at a bar on the Piazza Trento e Trieste to enjoy the sights and aperitivos  – a lovely way to end the day in Ferrara. 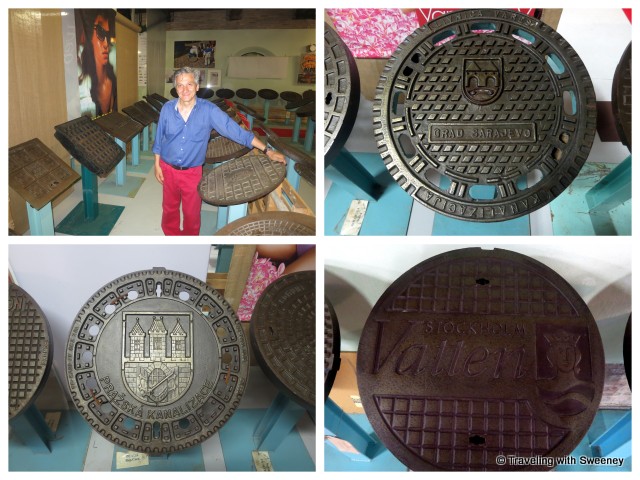 We made an unusual stop on our bike ride at a non-descript building on a quiet tree-lined street. There seems to be a museum for just about anything these days, and I’m usually surprised and delighted by such collections. Did you know there was a manhole cover museum in Ferrara? The International Manhole Cover Museum is located in Ferrara curated by its owner, Stephano Bottoni who has acquired decorative cast iron manhole covers from all over the world showcasing their art and functionality. The museum is open to the public by request only.

What would I like to do the next time I visit Ferrara? 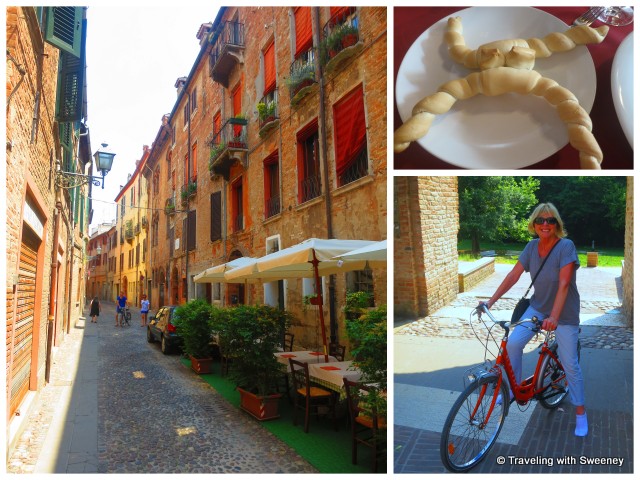 Thanks to Alessandra Catania and Ferrara Tourism for showing us around the city.