Berlin is the perfect place for travelers looking for both history and culture. Once you’ve found somewhere to stay while on your city break to Berlin, you can explore the city’s past and present to your heart’s content. With something happening all the time in the city, here are some of the must-see places in Berlin, a city of old and new.

Traveling Back in Time

The Reichstag is the seat of the German Parliament and is a Berlin landmark. It was destroyed during World War II and was rebuilt initially without the dome, but later redesigned and expanded with the glass dome between 1994 and 1999. You must register if you want to visit the dome and roof terrace.

Another landmark in Berlin is the City Hall. They often call it the “red city hall” because of the building’s red bricks. Inside, the Hall of Arms is where the government hosts important guests to the city, and the Grand Ballroom is used for events such as ceremonies and receptions.

The Brandenburg Gate started life as part of a wall that separated East and West Berlin. Now it’s the only gates of the former city wall and is a symbol of unity since the Berlin Wall collapsed in 1989. Its design is based on the Propylaeum, the gateway to the Acropolis in Athens.

There are more than just a couple of fine museums and galleries in Berlin. The Hamburger Bahnhof Museum für Gegenwart is located in a former main train station built in 1847. The museum has a comprehensive collection of contemporary art. The C/O Gallery is located in an old royal post office and has a brick building dated back to 1881. The main focus of this gallery is photography. Both well-known and up-and-coming artists show off their works in this gallery. 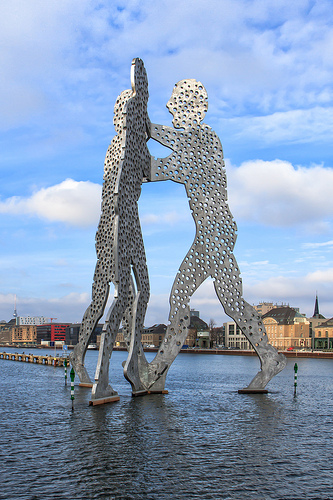 The East Side Gallery, part of the Berlin Wall, features the longest open-air gallery in the world. Following the fall of the Berlin Wall, artists used the East Side Gallery to comment on the political events of 1989 to 1990. You’ll also find lots of sculptures on Berlin’s streets, such as the Boxers in front of the Grand Hyatt Hotel on Potsdamer Platz and the Molecule Man in the Spree River near the Oberdaum Bridge. The Circle Culture Gallery is dedicated to showcasing street art, fashion, design, architecture and graffiti.

Back to the Future

In 2006, Berlin became the first country in Europe to receive the UNESCO City of Design title. More and more people are working in the creative industries and this shaping and influencing the city’s image and appearance. The Berlin Television Tower is an important landmark in Berlin and you can take in the city from there, not to mention take lunch in the tower’s revolving restaurant.

Meanwhile, the five-storey high Hauptbahnhof, the central train station, is a fine feat of architecture. The Humboldt Box is another innovative structure and a glimpse into the Berlin of the future.

Berlin is a marvelous combination of the old and the new that provides something for everyone to enjoy while the creative forces in the city sculpt and shape it, driving Berlin forward. Yet all the time, it’s a city that doesn’t dismiss the past, with something to remind citizens and visitors alike of the days gone by.

These Berlin travel tips are brought to you by expedia.uk.com.

Arthur Morris is a lecturer in European history and culture. When not teaching about culture, he likes to immerse himself in it by visiting Europe’s finest museums. His favorite artist is Salvador Dalí.