A Dash of Brady Street on a Milwaukee Food Tour

Taking a stroll with Milwaukee Food and City Tours on the “Brady Street Walking Lunch Tour” was like going back in time for me. I thought back to the days when Mr. TWS and I lived in Milwaukee and had an apartment on Prospect Avenue just a few blocks from where the tour began on Brady Street. I was glad that I had the chance to get a new look at this neighborhood near our old stomping grounds in Milwaukee and enjoy some delicious specialties of local eateries. 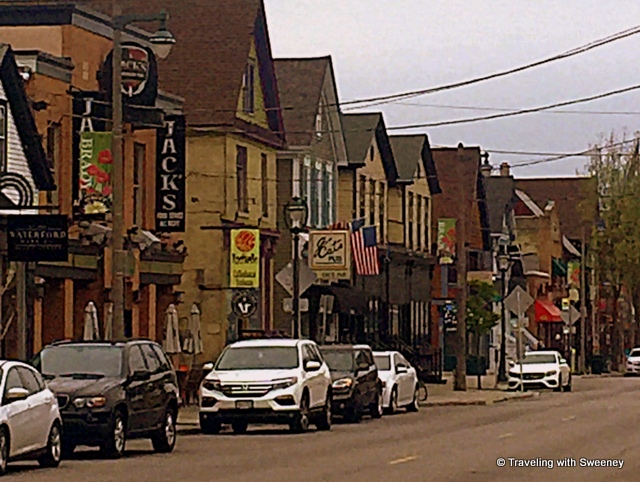 A stroll down Brady Street on Milwaukee’s East Side

Brady Street is a main drag in this ethnically diverse and historic neighborhood near downtown Milwaukee and within easy walking distance to the Lake Michigan shore. From the former speakeasy on the southwest corner of Farwell Avenue and Brady Street to the modern condos being constructed several blocks to the west, the street’s spirited and bohemian ambiance is reflected in its architecture, watering holes, shops, and restaurants. 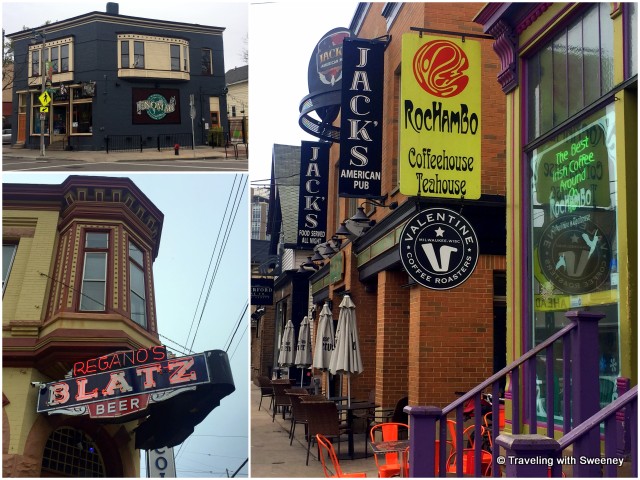 As we strolled along Brady Street between lunch stops on the 2-1/2 hour tour, our guide shared cultural and historical anecdotes about the neighborhood including its early Polish and Italian immigrants as well as the hippie days of the 1960s. Once a gritty area that people avoided at night, Brady Street had a Renaissance in the 1990s that rejuvenated the community while maintaining its eclectic and edgy character. I thought it was interesting that many buildings that looked like original structures of the early 20th century were actually constructed in recent decades with the intention of staying true to the designs of the past and blending in with the old buildings. Our guide also pointed out a few homes that are known as “Polish flats”, a typically one-story, four-room home built by Polish immigrants just beginning to make their way in the city. As they worked and the money came in, the homeowners raised the structure to add another unit below creating a two-family home for generating income as a rental unit. 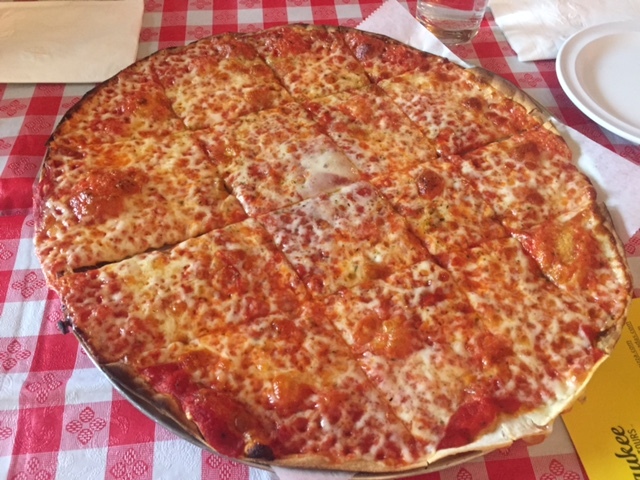 Our first stop on the tour was at Zaffiro’s Pizza, the only place that I’d previously been. It was one of our favorite pizza places when Mr. TWS and I lived in Milwaukee and we’ve often dropped in when we’ve been passing through town. It’s not fancy as you’ll see in a photo from my Milwaukee highlights post, but it’s got great pizza with a crispy cracker-thin crust. The ambiance is totally that of a neighborhood bar of 1954, the year that Zaffiro’s opened, with red and white checked tablecloths on tables in the small restaurant adjacent to the dimly-lit bar. 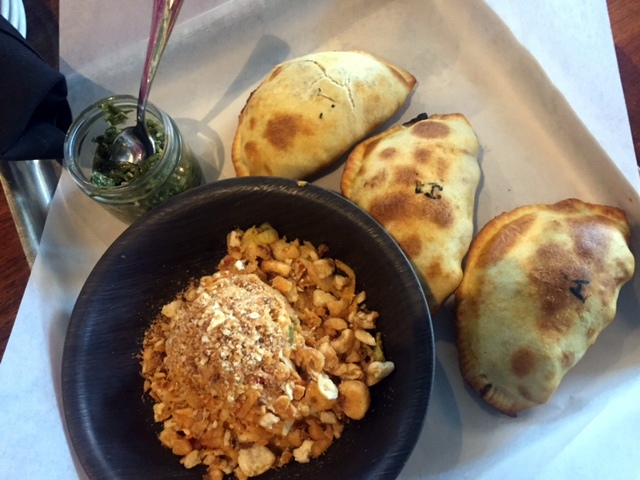 A taste of Argentina at La Mesa Empanada Bar

By the time we walked a couple of blocks from Zaffiro’s, I was ready for the next tasting. We switched our taste buds to Latin American fare at La Masa Empanada Bar, a restaurant opened in 2015 by siblings Megan and Brad Todd. I chose a flavorful Argentine beef empanada made with green olives, raisins, hard-boiled egg, and crushed chilies accompanied by chimichurri sauce and jicama slaw. I could easily have eaten another one or two. But it was quickly time to move on down the street to our next food experience.

Heading further west along Brady Street, our next stop was at Peter Sciortino Bakery. I loved the aroma of fresh-baked bread, pastries, and cookies that welcomed us at this old-fashioned Italian bakery. Peter and Grace Sciortino established the bakery in 1947 and the traditions have been continued with the Vellas, former employees who purchased the business in 1997. A regular customer happened to be making a purchase when we came in and gave our group an impromptu and sincere endorsement of the bakery. 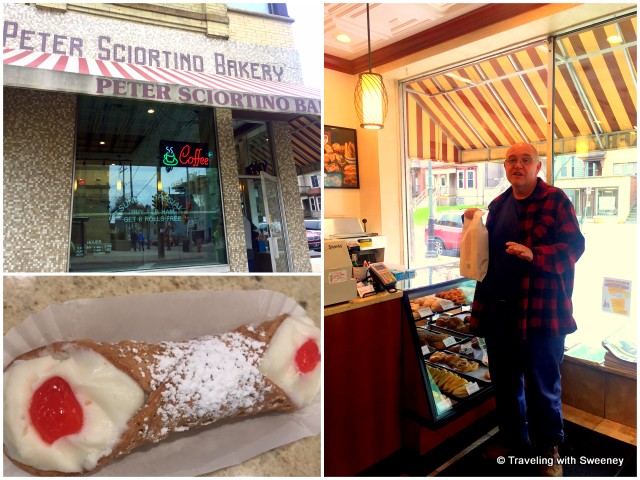 At Peter Sciortino’s Bakery — a satisfied customer and luscious cannoli

Who says that you can’t have antipasti after dessert? The next stop on the tour was Glorioso Bros. Grocery, an Italian grocery store with an extensive selection of Italian products — fresh produce, wines, cheeses, meats, gelato, and other Italian specialty products. In a small area of the store with tables and chairs, our group had a savory platter of salami, olives, provolone, prosciutto and Italian bread for dipping in oil. My favorites were the salami and cheese. Was I full yet? Almost, but not quite. So it was on to the next stop. 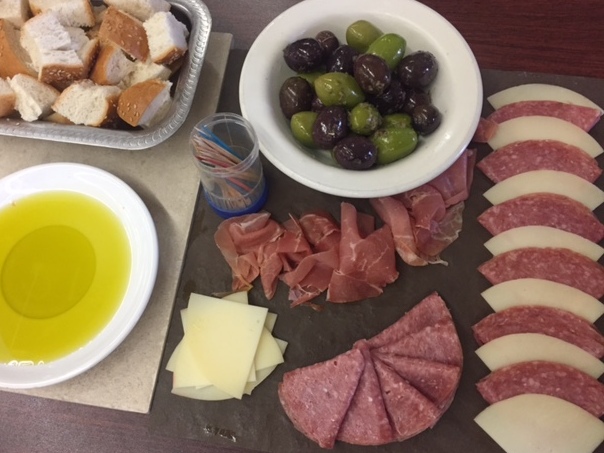 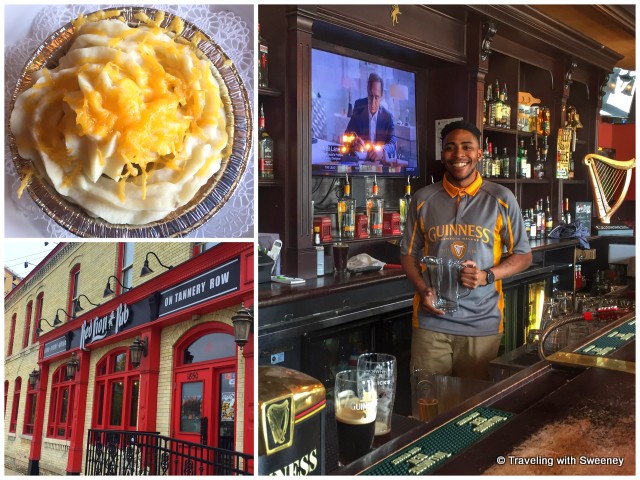 Shepherd’s Pie served with a smile at Red Lion Pub

Look at that smile! The friendly service of the bartender in the photo above on the right added to the nice experience at the Red Lion Pub just three blocks off Brady Street along the Milwaukee River. This area is bustling with conversions of old buildings, including an old slaughterhouse, to condos. The pub serves traditional, made-from-scratch British pub fare and we had a delicious Shepherd’s Pie made with lamb. 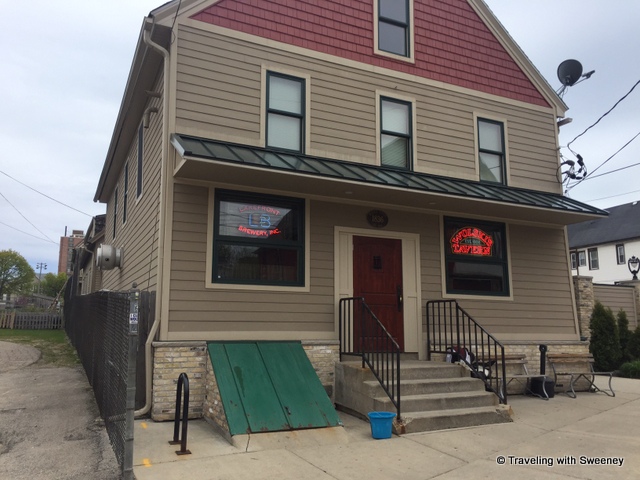 Time for a beer at Wolski’s Tavern

We concluded our tour with local beer and a basket of popcorn on Pulaski Street at Wolski’s Tavern, a family-owned establishment that’s been in business for over 100 years. It’s in bars like these where regulars gather to chat and opine, particularly about sports. As we sipped a cold brew, a customer at the bar stepped over to our group which included three Boston Red Sox fans in full fan attire who were in town for a game against the Milwaukee Brewers. Brewers fans are as loyal as any, so we wondered what would happen. But there was no need to worry because there was only friendly banter between the sports fans of both sides. Keep your eyes open when you travel around the world for “I Closed Wolski’s” bumper stickers. Apparently, it’s quite a thing to get one.

Finally, I was officially and pleasantly full. The Brady Street Walking Lunch Tour is a casual, fun, and tasty experience that will definitely satisfy your hunger pangs and show you a side of Milwaukee that’s still a little under the radar.

Disclosure: Thanks to Visit Milwaukee for providing my Milwaukee Food and City Tours pass.

Enchanted by Lucien Bahaj on Manhattan’s Lower East Side

Wonders of Nature at the Desert Botanical Garden

In Madrid there are so many plazas to love. Plaza

The Alhambra at sunset as seen from the Albaicin n

Looking down … my view of the staircase from my

Arrived in Madrid, final stop on our #triptospain

A few views of Granada, Spain — the third stop o

Mr. TWS loves being in the water and couldn’t wa

Beautiful Valencia! Walking along the paths of Jar

Out and about in Valencia, Spain. Beautiful, breez

Hello from PHX! Another first since pre-pandemic t

Step inside the inviting world of Papa Zouk in St.