I planned to spend an afternoon in San Francisco’s Golden Gate Park and the de Young Museum in the park on Friday, March 11th. But on that day, we were all following the news of the devastating earthquake and tsunami in Japan. In California, including San Francisco, we were on high alert for aftermath tsunamis along the coast and there were warnings and road closures in certain areas. The western end of the park is actually right at the ocean, so I was prepared to change my plans. However, I later confirmed with the de Young Museum that they were open and drove into the city. 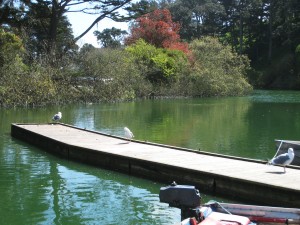 Golden Gate Park attracts tourists and San Francisco Bay Area residents year-round because of its natural beauty, diverse venues, and recreational activities. Throughout the park are meadows, picnic areas, barbeque pits, small lakes, playgrounds and sporting fields. A person can experience as much or as little as they choose.

On Friday, I started with a short walk on the path at Stow Lake. There were quite a few people out walking, jogging, and watching the ducks. Boats and bicycles can be rented at the boathouse and refreshments are also sold there. 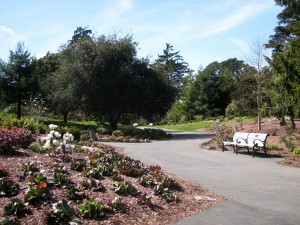 I parked on John F. Kennedy Drive next to the Rhododendron Dell, a very quiet, pretty place with benches along the paths, one of which leads to the Music Concourse area where concerts are held and the de Young museum is located. The area was created for the 1894 California Midwinter International Exposition which was a six month fair aimed at improving the San Francisco economy. 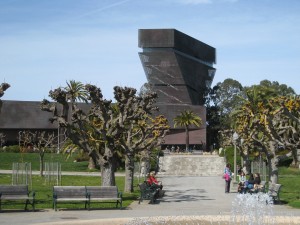 This was my first visit to the de Young Museum, but it won’t be the last. I decided to save the museum’s diverse permanent art collections from around the world for another time. Instead, I focused on the special Olmec: Colossal Masterworks of Ancient Mexico exhibition that includes stone sculptures of colossal heads and other artifacts from the Olmec civilization that began in about 1400 BC. I also went up to the tower’s Observation Floor where there are panoramic views of San Francisco and the bay. 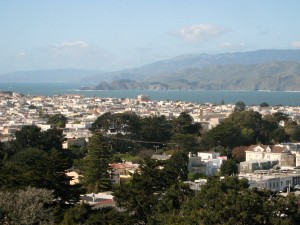 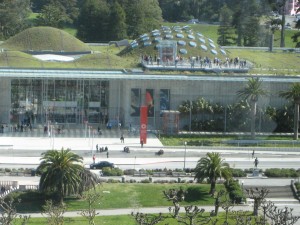 The Café de Young is very pleasant with indoor/outdoor seating and nice menu. I sat at a table by the windows where I could watch people enjoying the sunshine and see visitors exploring the large, grassy “green roof” of the Academy of Sciences across the concourse. The Academy is composed of a planetarium, natural history museum, aquarium, and a rainforest. Next to it is Shakespeare Garden, a small, secluded area where people sat on benches or lay on the grass. On a wall in the garden are passages from Shakespeare’s plays engraved on stone tablets.

A highlight of the afternoon and possibly the most beautiful part of Golden Gate Park is the Japanese Tea Garden. An open-air café, pagodas, bridges and statues are situated along winding paths in a setting of lush foliage and colorful flowers. The peacefulness of the garden was a surreal contrast to the tragic events in Japan that just happened.

The Conservatory of Flowers is the oldest building in the park and is surrounded by beautiful grounds. Weddings are often held in the Orchid Gallery and I attended one there several years ago. Before and after the ceremony, we had full access to enjoy the conservatory. 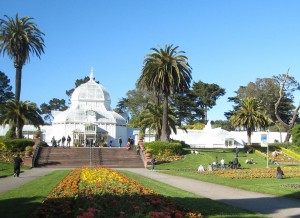 The final part of the afternoon was a drive to the far western end of the park. A server at the café in the Japanese Tea Garden told me that his favorite place in the park was Lloyd Lake, so I stopped there on my way. It’s a tranquil spot with a waterfall, many ducks and a white marble portico called “Portals of the Past” on the edge of the lake. It is all that remained of one of the Nob Hill mansions destroyed in the 1906 earthquake.

Continuing west, I was surprised to find several bison roaming inside a fenced-in area; I learned that they are cared for by the San Francisco Zoo. 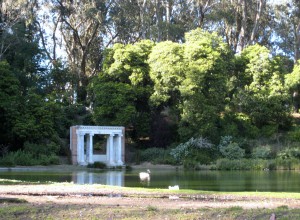 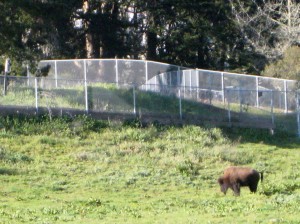 On the northwest corner of Golden Gate Park is the Dutch Windmill, originally built in 1902 for park irrigation, where it stands above the Great Highway and Ocean Beach. Highway access was closed off because the tsunami warning was still in effect. I spoke briefly to the two officers there for public safety. Like many of us, they also had the people of Japan in their thoughts. It seemed hard to believe that the mild waves I saw crashing against the beach could ever develop into such a destructive force. 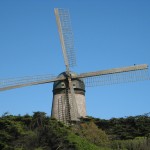 24 thoughts on “Friday in the Golden Gate Park”