Before we arrived at the Grand Wailea Resort in Maui, I had heard that the resort housed an impressive art collection and that they also offered a range of artistic activities and programs. But from the first steps into the lobby, I felt that there was much more to Grand Wailea art than I had imagined.

Japanese developer and original owner of Grand Wailea, Takeshi Sekiguchi, envisioned the resort as an open-air art museum for guests as well as the Maui community. Art was one of the key elements of the original design, which included light, water, flowers, trees, sound and art — each aspect is integrated throughout areas of the resort.

Many fine hotels and resorts display works of art to complement their décor, symbolize their brand and catch the eye of guests. But most of these have done this as part of the interior design of the hotel. However, as Grand Wailea’s Managing Director Matt Bailey described, at the Grand Wailea, “Art is in our DNA”. Here are some of the highlights of our art tour with Grand Wailea spokesperson, Christina Yumul.

Nine bronze cast sculptures by Colombian artist Fernando Botero are centerpieces of the collection. These impressive large bronze sculptures surround the Botero Bar in the lobby. The sculpture below, Mother and Child, shows an earth mother holding a child, but the child is really an adult man and she is also standing on a full-size adult man. 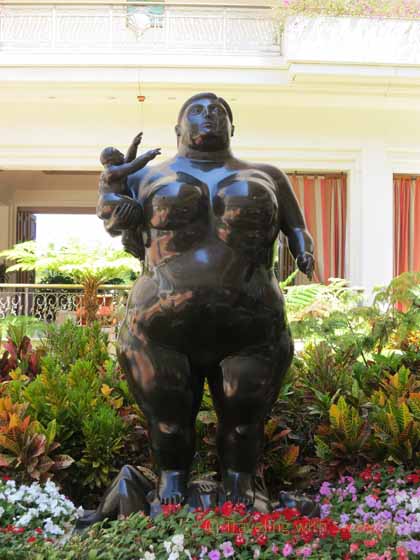 The Botero Sculpture of a woman lying on her stomach smoking a cigarette (pictured below) is the largest in the collection and one of the most valuable sculptures in Hawaii. The Boteros were purchased for $40K/each when they were commissioned in 1989. To speculate on what they might be worth now, a white marble version of Woman Smoking a Cigarette went for $1.6 million in 2007. 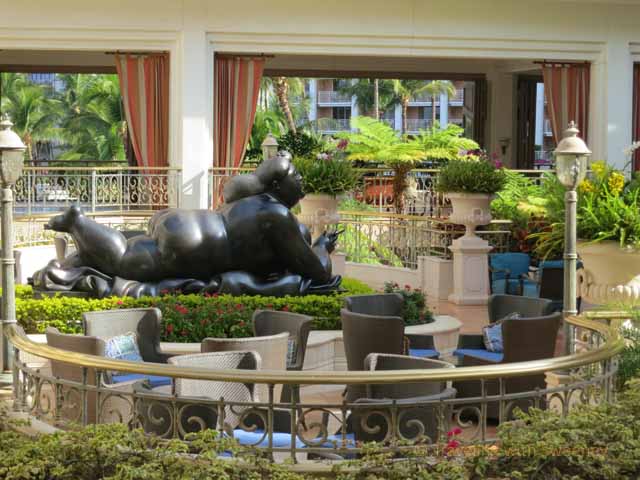 Sekiguchi’s objective was also to make the art accessible to all who visited, so you won’t find roped-off or glass-enclosed exhibits. While refreshing, this unusual accessibility occasionally creates situations to make curators nervous. Christina said that when Michael Gilbert, curator of the Grand Wailea’s collection, got very concerned when he saw children climbing on a million dollar statue, Sekiguchi had reassured him by saying that was the point of the accessibility.

The Spirit of Hawaiian Culture 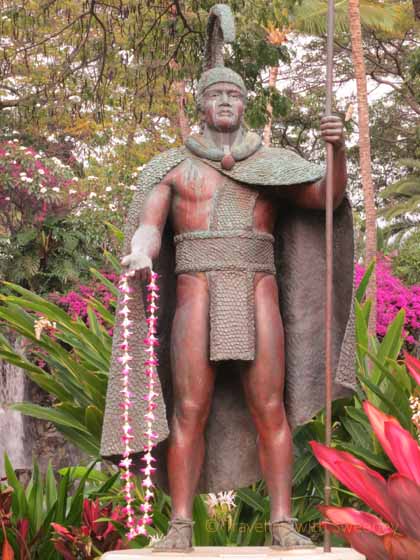 Many of the works at Grand Wailea represent the spirit of Hawaiian culture. Outside at the entrance of the Grand Wailea is one of only five major statues of King Kamehameha I who unified Hawaii and created the Kingdom of Hawaii in 1810. The statue was done by Herb Kawainui Kāne, an important artist and historian and one of the key people in the Second Hawaiian Renaissance in the 1970’s. He also was key to establishing that Hawaii was initially populated with Polynesians who went back and forth between Hawaii and Tahiti in canoes rather than as a result of a one-time accidental landing. Herb Kāne also has many other sculptures at the Grand Wailea. Unique about this sculpture was that there was a concerted effort to make it as realistic as possible. According to Christina, it is the only one of the statues that represents Kamehameha I’s features as Hawaiian rather than Aryan. The statue also uniquely portrays his height as 7 feet. In an effort to be accurate, that height was calculated from the length of his actual cape and pictures of him in the cape. 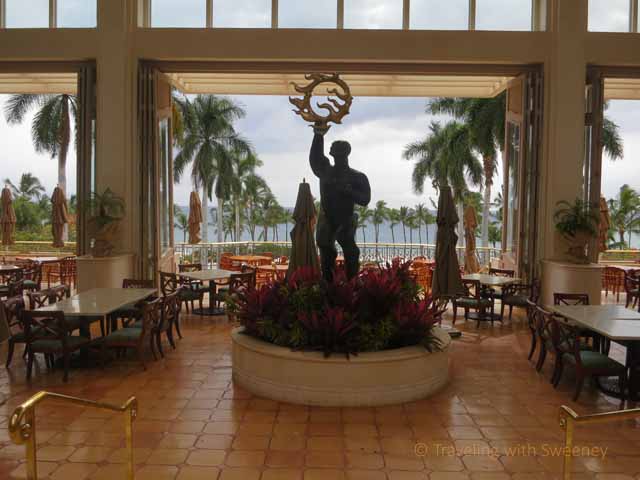 Maui Captures the Sun by Shige Yamada is positioned at the entrance of the hotel’s formal dining room. Christina described the story it tells of the demi-god Maui slowing the sun for his mother so that she could get more work done while it was still light. It is positioned so that the rays of the sun on the vernal equinox (I believe) pass directly through the fiery circle of the statue. 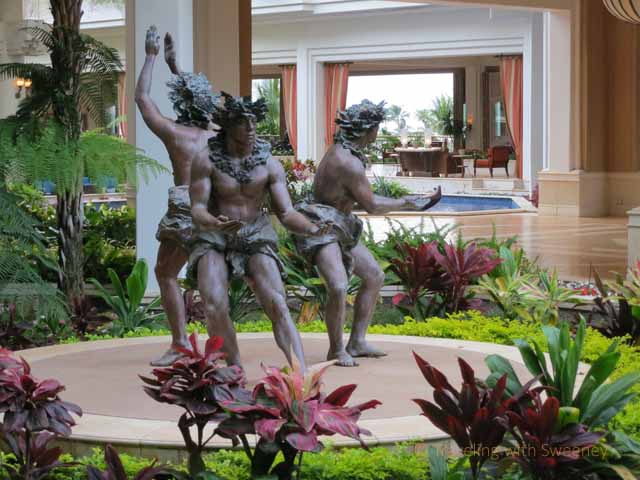 Jan Fisher’s Three Male Hula Dancers is complemented by another sculpture on the property, Three Female Hula Dancers as well as other bronzes of Polynesian men and women throughout the resort.

Art with a History 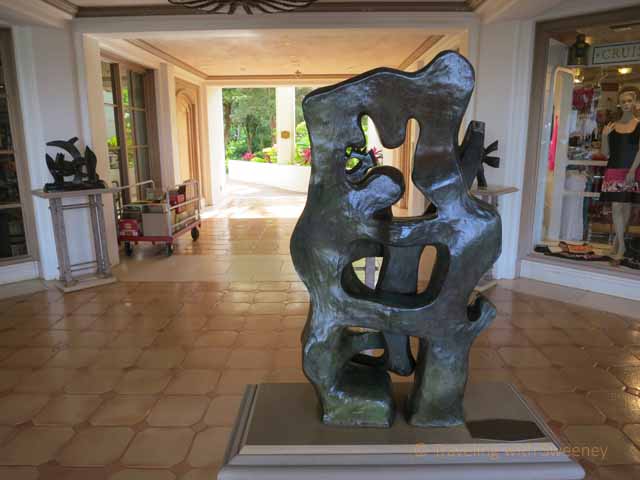 18 bronze sculptures created by French cubist Fernand Léger are also core pieces in the collection and according to Michael Gilbert are probably the most historically significant. La Branche was created in tribute to philanthropist Abby Rockefeller who commissioned him to do some paintings when he first came to the United States from Europe, the start of his lucrative career. 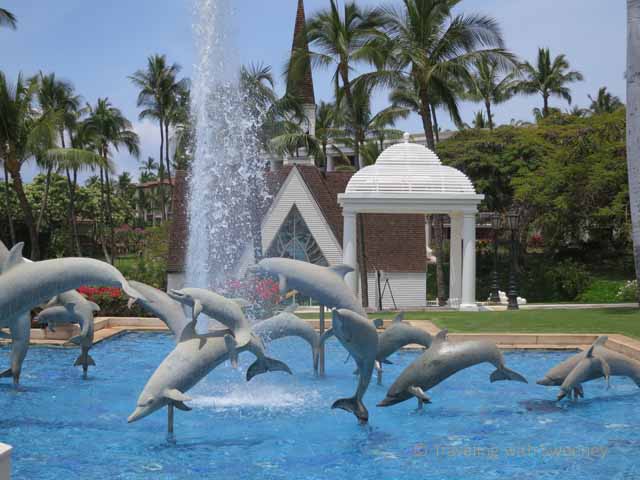 The first thing I heard in the mornings when I awoke and the last before I fell asleep was the sound of the ocean, waves gently lapping at the shore. In fact, Grand Wailea was designed so that water is heard everywhere throughout the resort. No matter where you are, you will hear water from the ocean, the fountains or the babbling brooks — part of the DNA. As such, many of the works are found around and in the water, including Herb Kane’s Child Mermaid with Shell at Humuhumunukunukuapua’a (Hawaiian for pig-snouted triggerfish, the state fish of Hawaii) Restaurant. 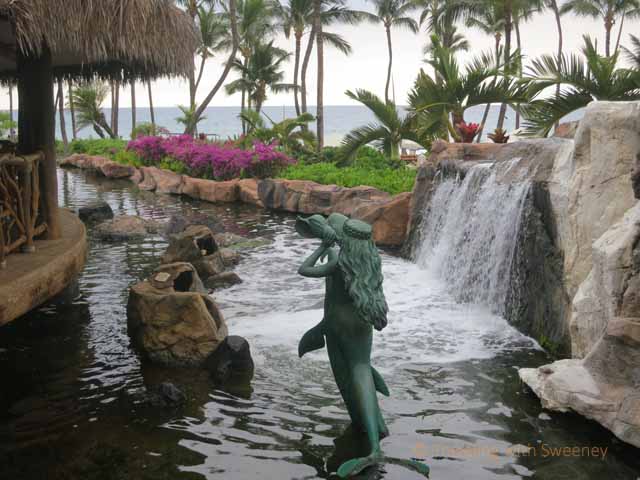 The painting below, Water, is by artist Zhou Ling whose other paintings in the resort include Hawaiian Aloha, Moon, and Fire.

As water is one of the key integrated design elements of Grand Wailea, the exquisite koi in the Grand Wailea’s ponds are works of living art in themselves. I learned that koi are collected as art and a single fish can sell for as much as $50,000. 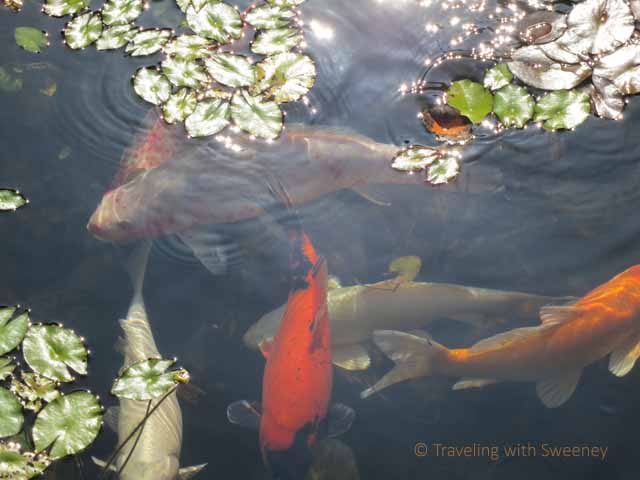 The Art of Glass

Each of the stained glass panels by Yvonne Cheng in the chapel at Grand Wailea depict different aspects of Hawaiian life. Three Murano glass chandeliers in 17th century French design also adorn the chapel. One is visible in the photo below.

And the exquisite glass collection continues in the NaPua Gallery where renowned artist Dale Chihuly’s Ocean Waves compels you to step inside. Made of 135 pieces of hand-blown multi-colored glass, it represents the oceans of the world. The gallery has a library room where art enthusiasts can relax and peruse a wide collection of art books. 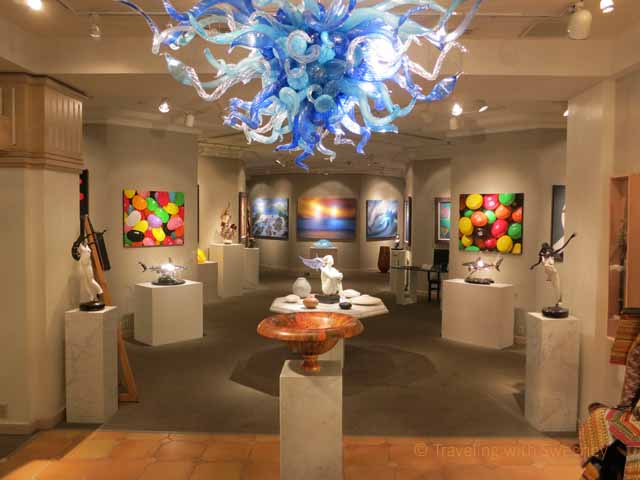 As you stroll along the meandering path among the palm trees and tropical flowers, you may also come across some unexpected art such as this sculpture by Jan Fisher of a half man and half boar creature purposely hidden among the flora so it seems real. I won’t tell you the location so you can be surprised, too. 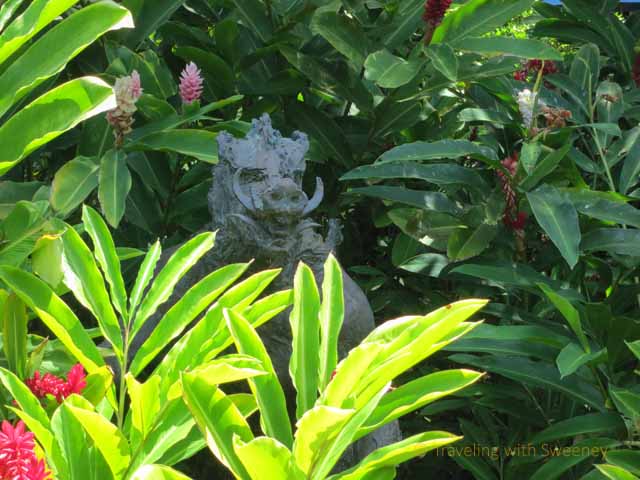 Sekiguchi was also influential in other hotel features, such as deciding to have the main shape of the main hotel structure to be that of a turtle emerging from the sea. Seen from the air, you can make out the shape of a turtle — the intended effect is that the turtle has emerged from the ocean and headed toward Hana, represented by rocks and a waterfall at the hotel entrance.

Art is everywhere at the Grand Wailea from the major overall design of the building and grounds to the individual works of art in the collection, many of them capturing the essence of the Hawaiian spirit.

42 thoughts on “Grand Wailea Art: It’s in Their DNA”