Among the many varied experiences during our recent trip to Maui, one of the most memorable was horseback riding in Hana, on the island’s eastern coast. 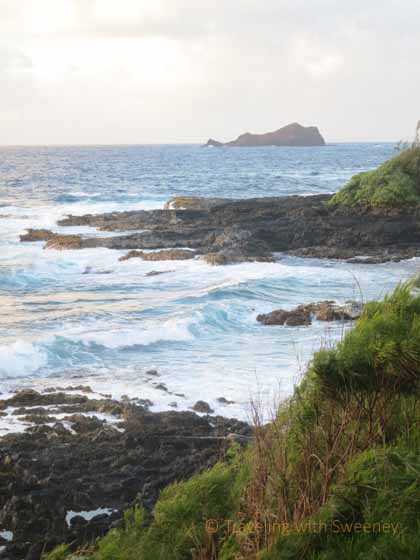 Morning on the Hana coastline

Though Sweeney had done some English style riding years earlier, my experience had been a few rides on a friend’s horse; in that the goal there was not to learn to ride but to survive. There are coastal horseback rides in California very near our house, but we’d never chosen to try, partly because there had been some controversy regarding the treatment of the horses. Both of us were quite happy with the decision to ride in Maui: even with our history, riding was basically a new experience, the views along the coast were perfect and so was the weather, but probably the biggest reason was the surprise we hadn’t expected. 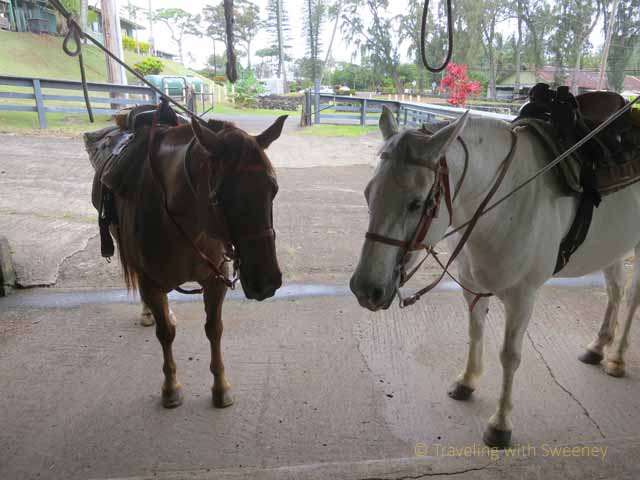 As we approached the Hana Riding Stables, just across Hana Highway from our cottage at Travaasa Hana, we were greeted by our guide, Jolynn Piimauna, who introduced us to Lucky and Cody, the horses Sweeney and I would ride. We were especially lucky to be the only ones taking advantage of the early morning ride. 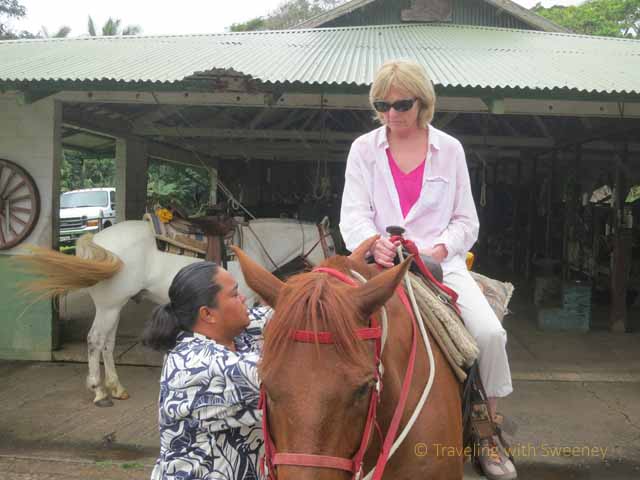 As with anything new, there’s always a little apprehension and a desire not to do anything stupid. Jolynn was very calm and instructive and seconds later Sweeney was up on Lucky. Jolynn provided the basic instructions for holding the reins, leg and body positioning and then basic ways of communicating with Lucky to go right, left and stop. It was here we got our first insight about Jolynn. Sweeney said, “And you’ll be right there with us.” Jolynn said, “No, I’ll just need to go with you to cross the road and then you’ll be on your own for the ride; just be back in an hour.” We were both surprised.

A surprised and frightened rider? 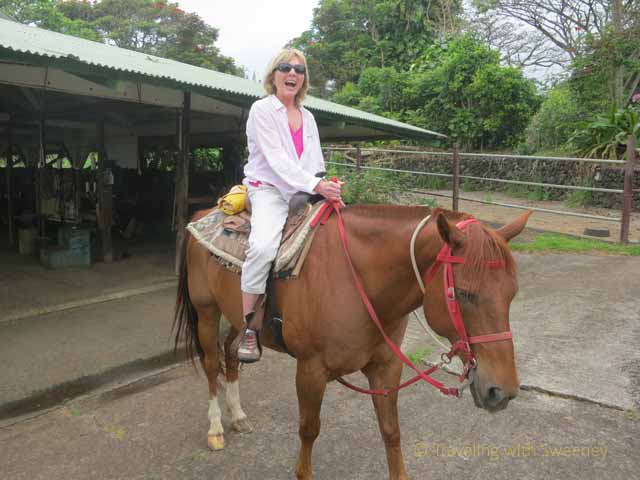 Shocked by the news?

I thought that was unexpected, but pretty neat. Judging by the look on Sweeney’s face, I don’t think she was fond of the concept she but she just laughed and said, “Oh, OK!” (The photo above was just a random shot.) Then quickly Jolynn said, “No, I’ll be with you all the way.” I really appreciate that kind of tongue in cheek humor and have a pretty good radar but Jolynn had taken us both. It was the timing and total believability of her delivery. Seconds later I was up on Cody and after the same instructions, we were off.

We crossed the road and headed into a pasture along the coast. There were other horses there and a younger one was in the path. I assumed Cody would just walk around on his own but headed right for the horse nipping him in the butt as if to say, “Get out of the way, youngster; show some respect.” 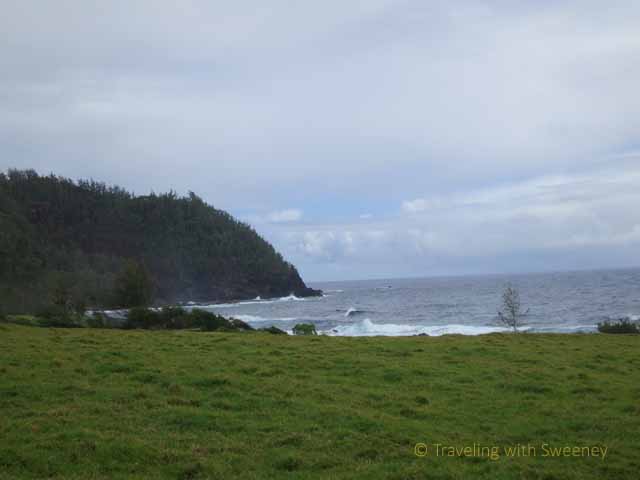 The Hana Ranch owns lots of property near Hana much of it is used for raising cattle. We approached a gate and could see many “cows” on the other side. Jolynn said, “They’re all bulls. They’re used to riders coming through; they won’t bother with us. Just don’t look them in the eye.” It was only when I’d repeated this for Sweeney that she told me she was just kidding. Twice in a few minutes; Jolynn was one of the best at this. 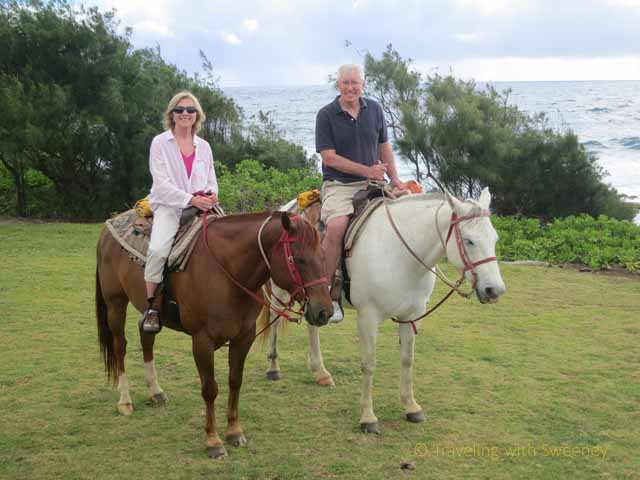 Traveling with Sweeney on horseback

The Hawaiians have a term for chatting and story-telling, “talk story”, and that’s what we did about several different topics during the beautiful ride along the coast just south of the Travaasa property; we learned a lot about Hawaiian (in particular Hana) residents and also about Jolynn who was the surprise of the trip making what would have been a great activity into one that was really extraordinary. She talked of her upbringing as a fourth generation Hana native and her father who trained horses teaching her at an early age. She first rode a horse alone at two. She said she and her four siblings didn’t understand why they couldn’t play and take it easy like other kids but now she is really grateful that her father passed the family business to her siblings and especially her. She was a living representative of the way tradition and lore and know-how are passed generation to generation uniquely in Hawaii.

Along the way, Jolynn pointed to a large house that was far out on a point and said there was a 90+ year-old woman living there. She said that the woman gave back to the community by allowing the locals to use a section of her property for parties at no cost for special celebrations, such as weddings. In return, volunteers donated time to help with the upkeep of her property and house.

Jolynn talked about other ways that people helped each other and how this community of about 1800 residents was a very close knit family. The downside, she said, is that everyone knows your business. She talked of her sister’s house being destroyed by a tsunami. Townspeople on higher ground pulled her mother and sisters from the water to safety after the first wave. The townspeople also worked together in restoring their home, which was completely gone after the wave, and they did it in less than a month. 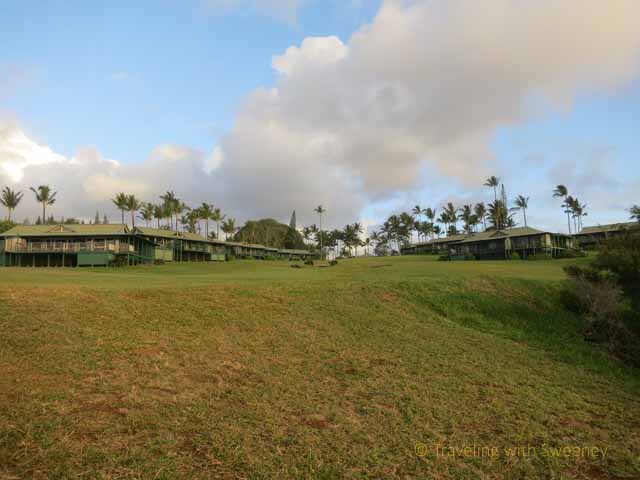 She spoke of the high cost for groceries and the fact that locals would make monthly treks to the other side of Maui to stock up and freeze food and supplies that are far less expensive than in Hana. She said they supplement with meat they get by hunting deer and wild pigs on the freely accessible land as well as by fishing in the ocean. There were also stray cattle that were considered wild.

We had heard that Oprah Winfrey owned property that we would be riding near. We had just assumed an investment but Jolynn described meeting Oprah as she inquired about Hana, and Jolynn also provided the “rest of the story” (as Paul Harvey used to say). She thought Oprah was a wonderful person and described the land deal as something that really helped the Hana Ranch and the community. She also described Oprah’s generosity and friendliness towards her personally.

We asked about other celebrities she’d met and she mentioned a few such as Michael and Janet Jackson, Steven Seagal and Jim Nabors. She particularly singled out Michael Jackson, saying that he was so incredibly nice. When her family heard he was to take a riding tour with her, they all wanted to show up and meet him. When she asked him if it would be OK, he said certainly and was very gracious with his time after the ride, spending hours listening to her sister singing country western songs (a tradition passed on by their mother) and joining in. She said they were all very nice, but did mention one other celebrity who was not so nice and very demanding. However, Jolynn made it clear that she was the boss on the trail ride and the celebrity needed to do what she said. 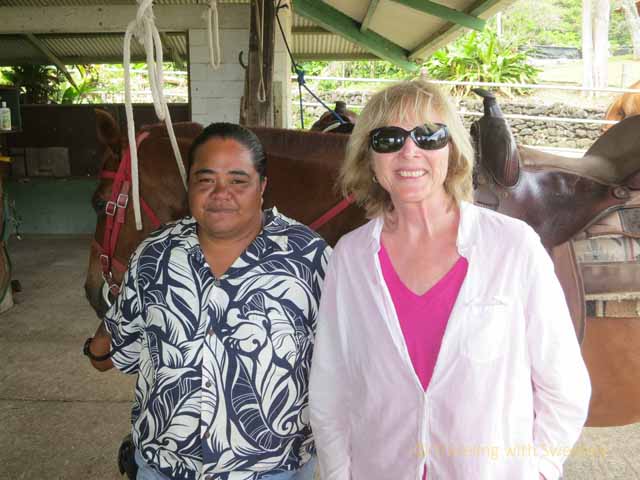 The ride and instruction were great, but the really surprising and unique aspect of the activity was meeting and talking with Jolynn. If you travel to Hana, take the time to go riding with her. Check with Travaasa Hana’s concierge about Hana Riding Stables pricing and reservations.

Talk story with us — what are your horseback riding experiences?

49 thoughts on “Horseback Riding and Talking Story in Hana”

We had a wild weather day here in @scottsdaleariz

Merry Christmas from the Traveling With Sweeney du

I still say that @fsgeorgevparis is one of my top

Charlottenburg Palace in Berlin — As I neared th

I love my old hometown of Chicago and visiting at

It’s that time of year! Shopping for our Christm

I was watching the lighting of the Christmas tree