By Mr. TWS — There are often surprises on a first visit to an area. One of these and something that Sweeney and I really liked about Salzburg was the way the Altstadt (Old Town) was nestled under a cliff and guarded over by Hohensalzburg Fortress (or Festung Hohensalzburg, meaning High Salzburg Fortress) one of the largest Medieval castles in Europe. 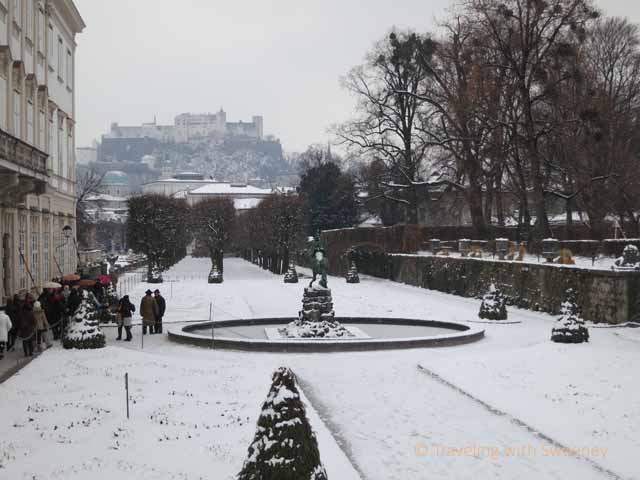 Mirabell Gardens with Hohensalzburg Fortress in the background

Hohensalzburg Fortress is even more dominating lit up at night. Its building began in 1077, and I can imagine that it must have provided a feeling of safety through the years for the inhabitants of Salzburg. The castle was built by the Prince Archbishop of the time and expanded by his successors over the centuries to protect the city and symbolize their authority as the religious and secular powers of the province. 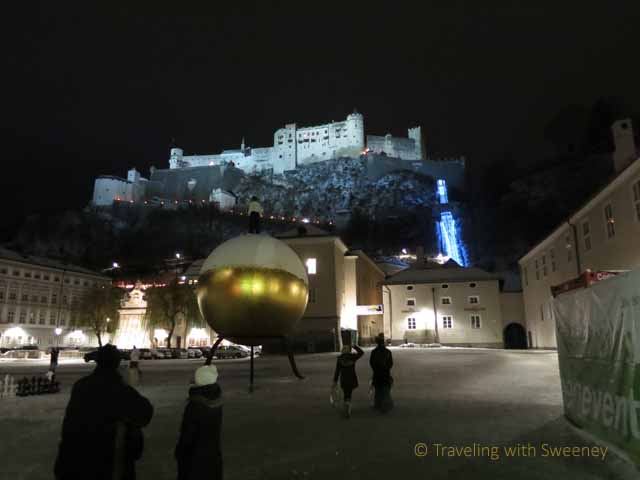 The picture above captures the omnipresence of the fortress keeping watch over the city. But it also provides a scene that is somewhat surprising. The photo was taken from Kapitelplatz (Chapter Square) just off Salzburg Domplatz (Cathedral Square) and abutting the west side of the cathedral.

Covered in snow, the large gold sphere shares the domination of the view. Atop stands the image of an ordinary man in white shirt, black pants, expressionless, gazing into the distance (ironically, not at the fortress which commands the focus), basically so much an everyman that it magnifies the effect. The sphere is characteristic of the modern artwork that springs up in cities with historic beauty, architecture and charm. There is typically controversy – should anything be changed in such a beautiful historic setting? Is it art? And this was no exception. The work is Stephan Balkenhol′s “Sphaera”, one of the 10 works of art that were sponsored annually by the Salzburg Foundation since 2002, and it continues to spawn debate and controversy. Another part of Balkenhol’s contribution is “Woman in Rock”, a similar statue of a woman that is embedded in the stone wall below the fortress at the nearby Toscaninihof courtyard.

Just to the left of the sphere is a fountain, both a watering hole and a horse wash, the less famous of the two working horse washes in Salzburg. The other is in Mirabell Gardens. You can see the small monument on the back side of the fountain. Also notable about Kapitelplatz is that just below the globe and away from the fortress is a giant chessboard on the pavement, covered with snow when we were there, but populated in warmer seasons with large chess pieces about 1 meter in height, used for actual chess matches where contestants lug the large chessmen to make their moves. Imagine how that adds to the eclectic nature of the view.

The funicular illuminated in blue lights in the photo was one of the ways to reach the castle and the next day Sweeney and I took the short steep ride up the cliff face for a tour.

As we walked in, we were treated to a southern view of the Alps, just a taste of the wonderful views of the area the tour would provide. Salzburg is located on the Northern border of the Northern Alps and these were the Alps through which the von Trapp family of Sound of Music escaped to Switzerland. Of course, that was according to the movie and certainly a wonderful romantic dramatization. How do you think they really left Salzburg? (answer below) 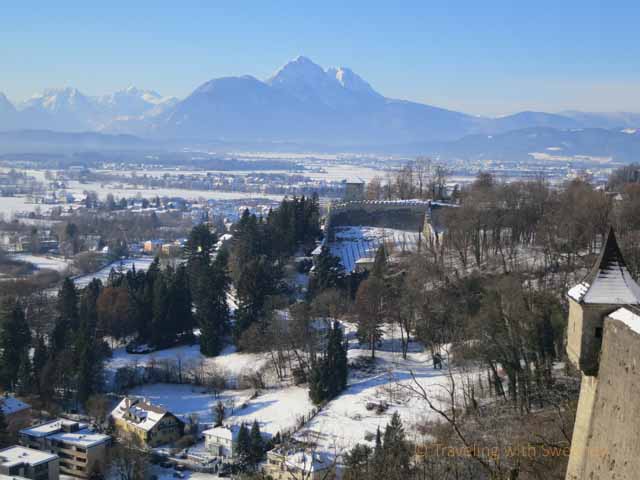 The Alps from Hohensalzburg Fortress

Entering the fortress, the first thing that is evident is the difference in the stonework and architecture representing the changes and additions made over time.

inside the fortress, a short walk from the funicular to the courtyard entrance

As we turned the corner we entered the main courtyard. Since it was early December, one of Salzburg’s Christmas markets was set up here. Though it was small, it had some unique booths and the setting was great. In the summer months, the courtyard also hosts theatrical performances and a medieval festival. Also visible is St. George’s Chapel, with an entrance on the courtyard. 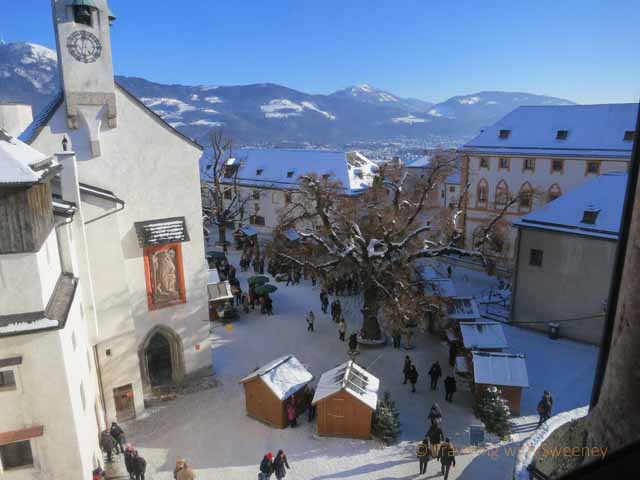 St. George’s Chapel and Christmas market in the fortress courtyard

Built around 1500 by the Archbishop Leonhard von Keutschach, the Gothic chapel was very peaceful compared to the bustle in the courtyard. It felt very cozy and there were numerous features that made it distinct, such as the bas-relief carvings of the apostles on the walls, the altar and the domed ceiling above the altar. 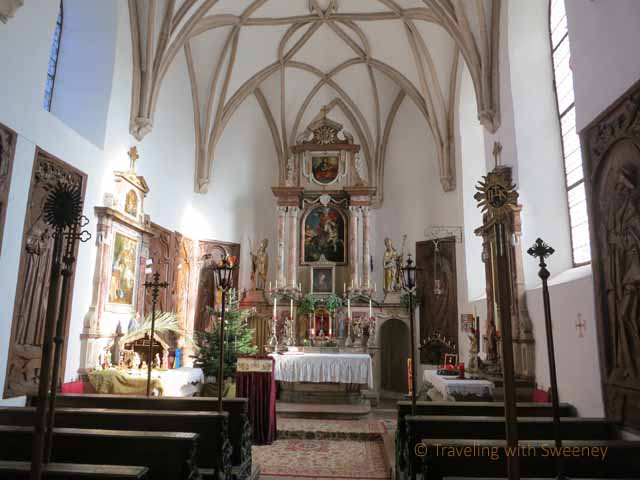 Exiting the chapel, I was again struck by the beauty of the day. Following the previous day’s falling snow which provided its own beauty as we walked around Salzburg, were bright sunshine and a clear blue sky that made the dusting of the snow even prettier. 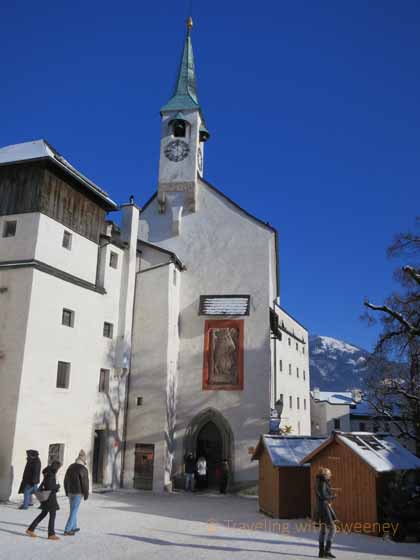 The tour continued inside the castle with a self-paced audio guide. It provided a good description as we walked through numerous rooms on several levels, including the Golden Hall, Golden Room and King’s bedchamber. I thought that the presentation of armor and weapons was nicely done. There was a similar room with display cases of medieval instruments. 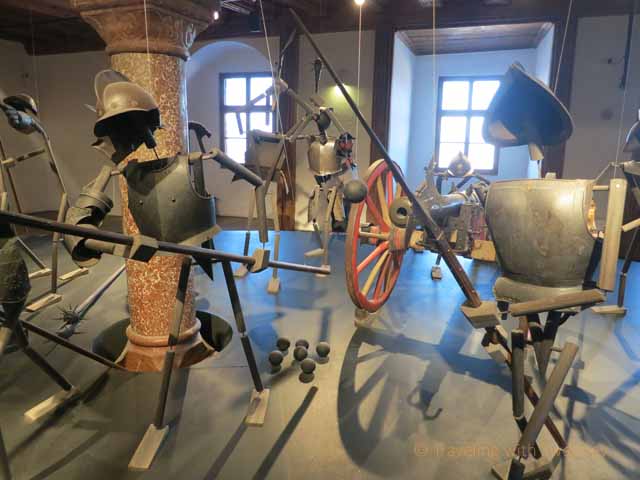 One of the treasures in the castle was a mechanical pipe organ with over 200 pipes that dated back to about 1500. Organs of this type were common in towns and I believe this is the only one to have survived completely intact. It had a long cylinder that looked like the gigantic roll from a player piano. It played a roar three times a day that included the wake-up call for the city of Salzburg and the signal for bed-time. It must have been very loud within the castle to have been used as a communication to the city far below. Later the organ was fitted to play something other than the roar which earned it the nickname “Salzburg Bull” (“Salzburger Stier”). 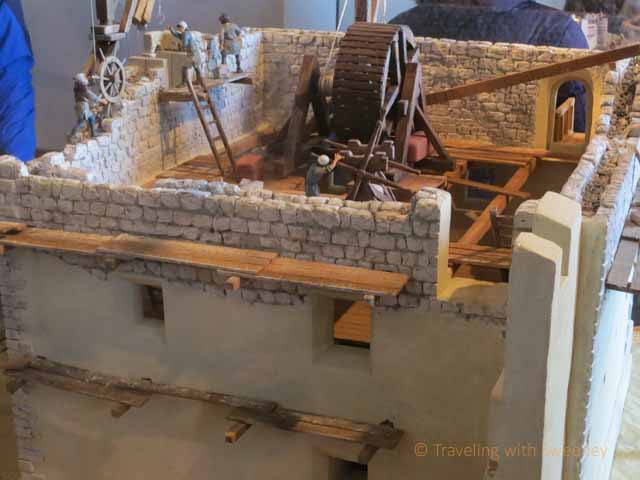 One of the rooms also housed about 20 models of the fortress, representing what it looked like at different times over the centuries, highlighting the various expansions. 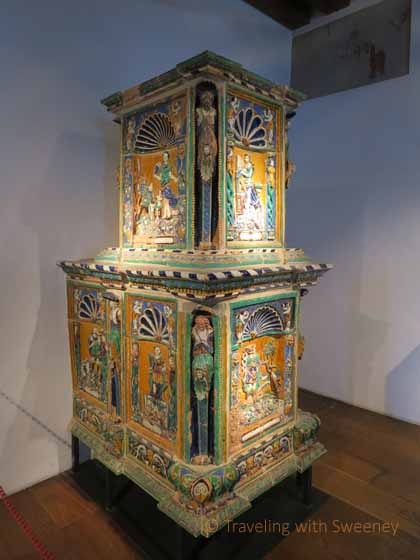 There were almost no furnishings in the castle but this ornate ceramic stove was similar to others we saw in Salzburg.

Used as a fortress and residence, there was also a prison in Hohensalzburg. On display were numerous medieval torture devices and restraints (chains and stocks), though these were brought from some other location and never used in the fortress.

This finally led to what was the real highlight of the tour, the 360 view of the area provided atop one of the castles towers (“Recturm”). With a beautiful clear day we were provided with a wonderful aerial view of the city or Salzburg and the Salzach River. The dominant structure is the Baroque Salzburg Dom with its green dome and green capped towers. 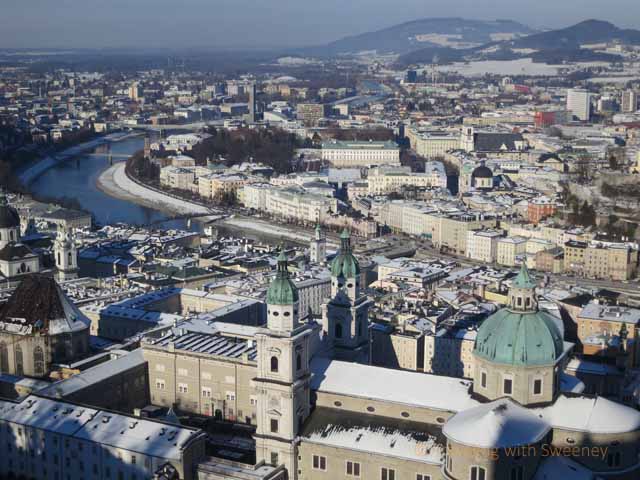 View of beautiful Salzburg and the Salzach River from Hohensalzburg Fortress

In the photo below are the Northern Alps and vast plain to the south. I don’t know the exact story of the lone house in the foreground, but it is incredibly compelling. Imagine living there with the Alps on one horizon, Hohensalzburg on the other, a short distance away from Alstadt in Salzburg, and nearby Lake Leopoldskroner Weiher that was the location for the von Trapp mansion in the movie (though not reality). I believe that the lake is just left of center and below the Alps. 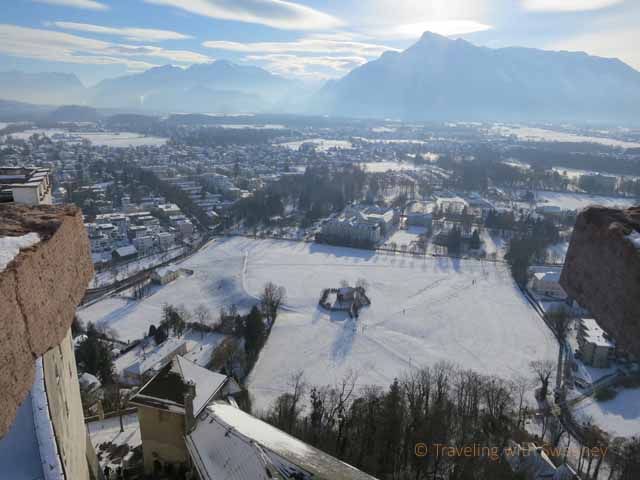 The Alps and home in the meadow

The photo below looking southwest captures an interesting juxtaposition of part of the fortress against the Alps and plain beyond. Obscured and not visible but just to the left in the picture is Nonnberg Abbey where Maria von Trapp was a novice (and also where she was married, though the location for the wedding in the movie was about 15 miles away at Mondsee Cathedral, Mondsee, Austria). 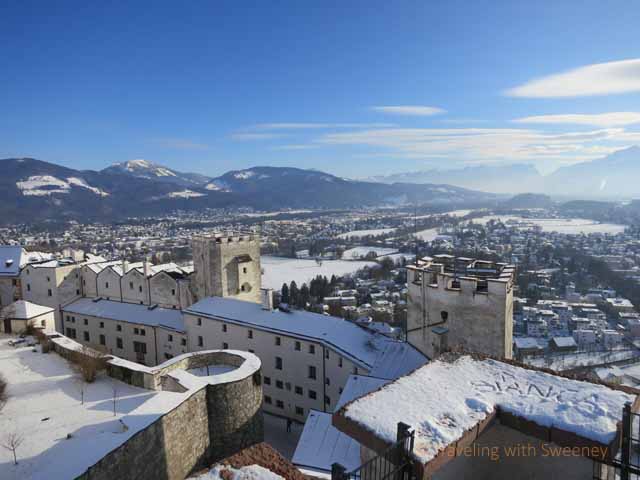 Another view from the top

I don’t know the story of the buildings in the foreground of the picture below, but what a beautiful inviting scene. 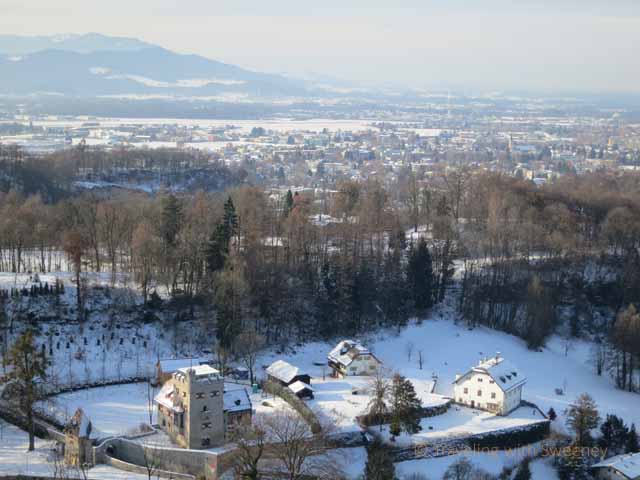 Homes and countryside outside of Salzburg

This view looking northeast shows one of the fortress towers and remains of the northern defense wall in the hills.

As we left the fortress, I was taken by the steep rock wall on which the fortress sits. There are many details from the centuries of expansion and I’m sure there are many interesting nooks and treasures in the wall. 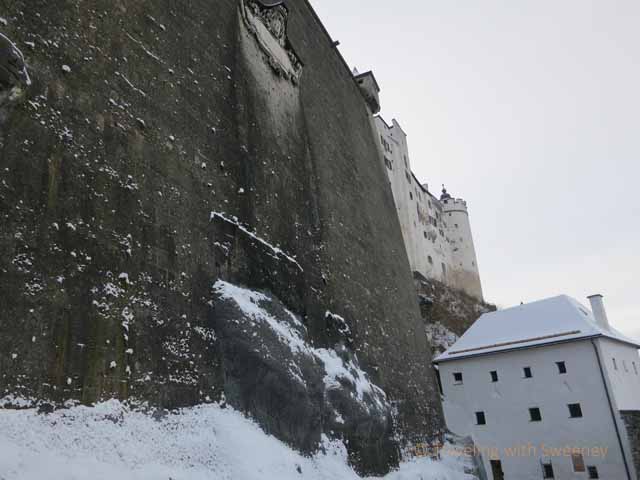 As we descended toward the city, we were provided additional views from a different perspective with Salzburg Cathedral and the rooftops of Altstadt. 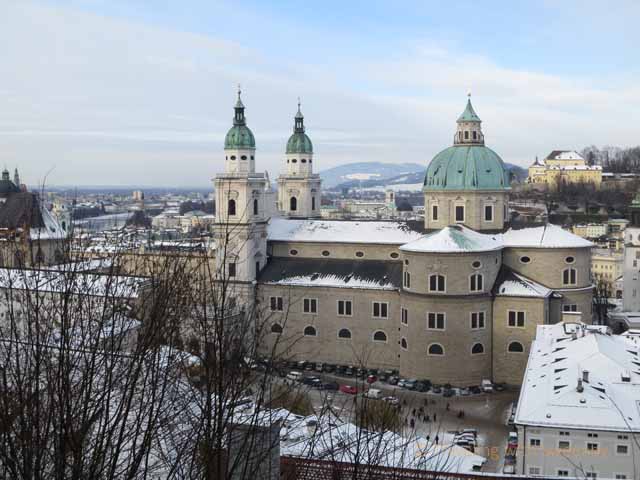 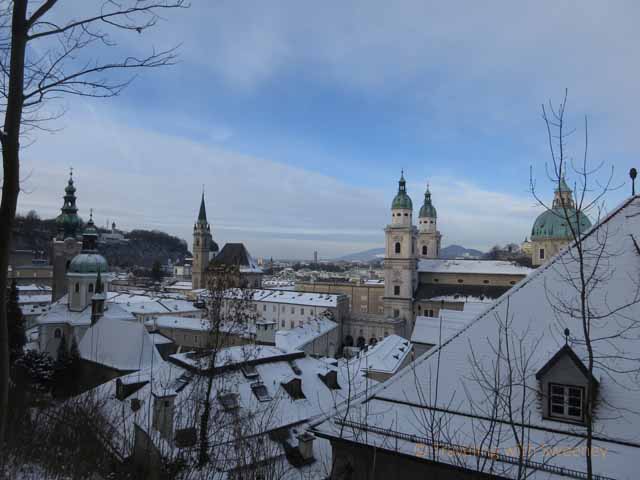 The descent was not difficult but I think that the funicular was a better choice for the way up. The stairs and ramped walkways were quite a trek even on the way down, especially since they were a little slippery. 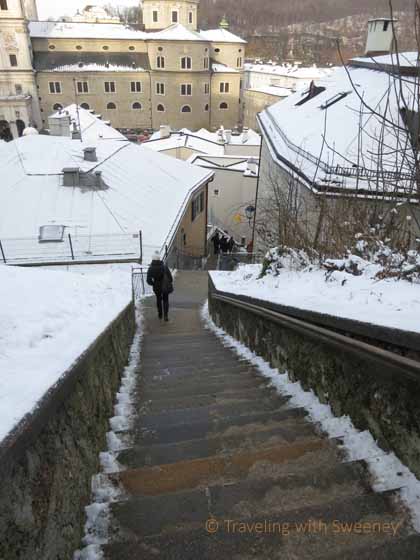 Stairs down to Aldstadt

We only had 2 days in Salzburg and there was lots we didn’t see, but felt that Hohensalzburg Fortress was well worth visiting for a few hours.

So how did the von Trapps leave Salzburg? Sad to say — by train.

Travel tip: Investigate the Salzburg Card for your sightseeing itinerary. It might save you some money on Salzburg attractions.