A tour of King Ludwig II’s Palace on Herreninsel Island

Mad King Ludwig. The Fairy Tale King. Our Cherished King. These were names by which King Ludwig II of Bavaria was known during his short life.

By Mr. TWS — Why was he called “Mad King Ludwig”? Why did he have so many palaces and castles? What was his obsession with a monarch from another country and century? Why was his death mysterious? Why was he popular with Bavarians and other Germans then and now? On our trip to Bavaria in December, we learned more about this enigmatic man on a tour of one of his palaces on Herreninsel Island in Lake Chiemsee, the largest lake in Bavaria.

We began in the small Bavarian town of Prien am Chiemsee, catching a ferry that would take us to Herreninsel to visit Herrenchiemsee, the complex of royal buildings on the island, to tour King Ludwig II’s palace and then later take us to Frauenchiemsee Island for one of our many Christmas market visits of the trip. 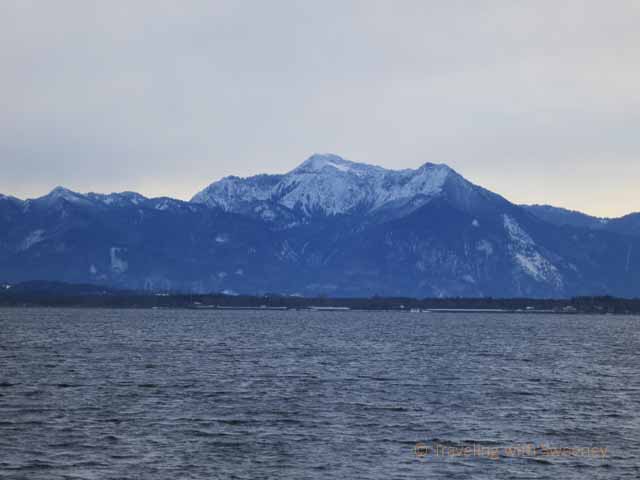 A wintry walk on Herreninsel Island

Even on a cold December day the lake was beautiful with the Bavarian Alps backdrop. The 15-minute ferry ride to Herreninsel had quite a few people aboard for a Friday morning in December because many were headed to the Christmas market on Frauenchiemsee. The island was covered with snow and it was a brisk and refreshing clear day. The lake, the shore and the Alps were visible as we began our walk toward the palace from the ferry dock and ticket office. 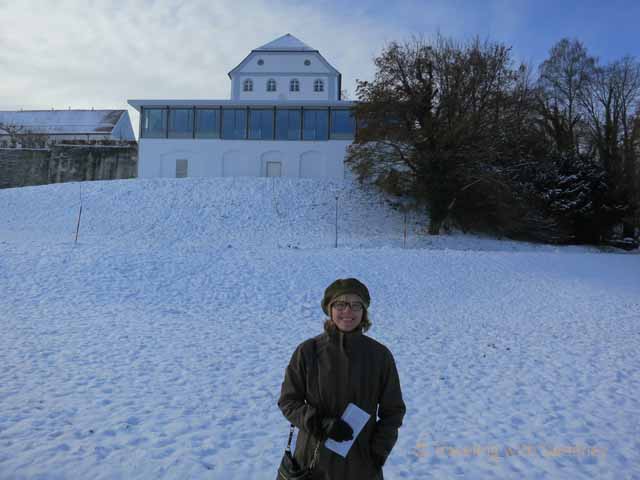 Sweeney and the Herrenchiemsee Abbey on Herreninsel Island

Also visible high above us was the Herrenchiemsee Abbey, built in 765 A.D. Ludwig utilized the abbey as a residence on his visits during the construction of the palace. It is an impressive building itself, but it certainly didn’t prepare us for the splendor that lay ahead in the palace. The abbey had been converted for other uses including a brewery when the island was sold in the early nineteenth century before Ludwig bought the island in 1873. We didn’t have time on this visit to tour the Abbey but I am curious about the history and the fairly modern look of the building from the outside. 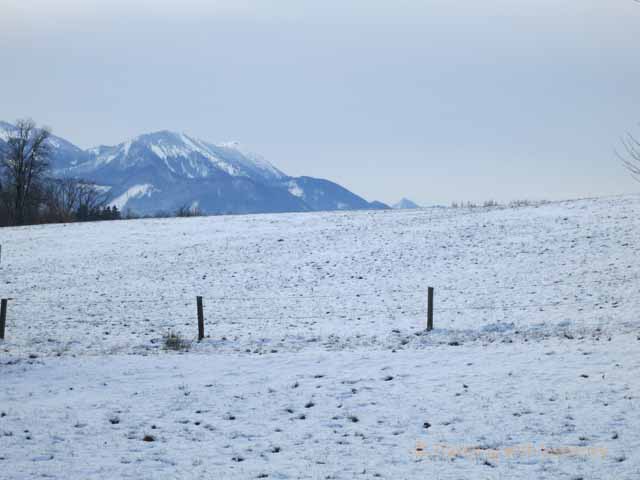 The walk to the palace beneath the abbey and through the woods took about 20 minutes on the snow-covered path. 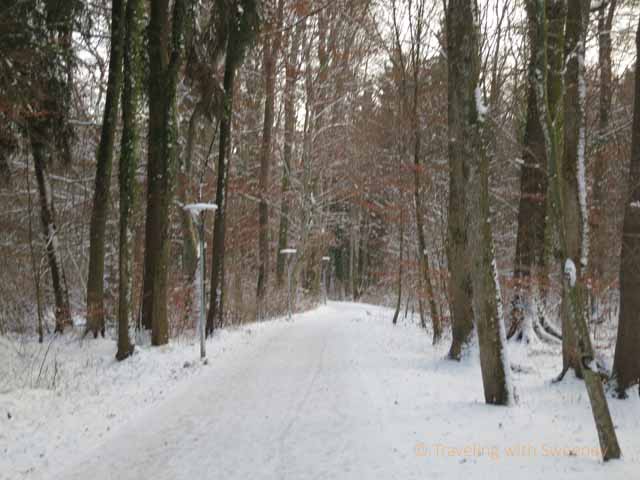 Walking Through the Woods to King Ludwig’s Palace

In April through October a horse-drawn carriage ride is an option. As we walked I could picture a horse drawn sleigh ride but the walk set the mood nicely, giving us some quiet time to take in the scene, especially since we only met two other people along the way. Incidentally, Ludwig was fond of sleigh rides at night and had very elaborate sleighs.

Up a last hill and we had our first view of the Royal Palace of Herrenchiemsee, also called the New Palace (Neues Schloss). This was the third of Ludwig’s palaces/castles and the most costly and elaborate. For those who have visited Versailles, it may look familiar. Ludwig passionately admired Louis XIV of France and set out to build a palace modeled after Versailles but exceeding it. 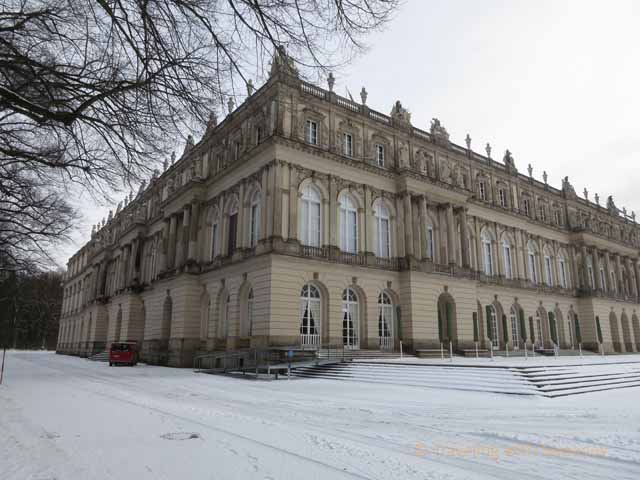 Ludwig II was king of Bavaria from 1864 until his mysterious death in 1886. The “Mad King” reference came from the reason sought by his ministers to depose him claiming mental illness. The ministers’ cause was aided by Ludwig’s focus on architecture and art and dislike of traditional matters of state and the fact that Ludwig’s younger brother was mentally ill. Also, Ludwig’s eccentric behavior, spending extravagantly on the palaces and castle, bankrupted him well before he was close to completing Herrenchiemsee Palace.

He was able to complete the fountains and gardens resembling Versailles in front of the palace face but we were unable to see these since they were covered for the winter. 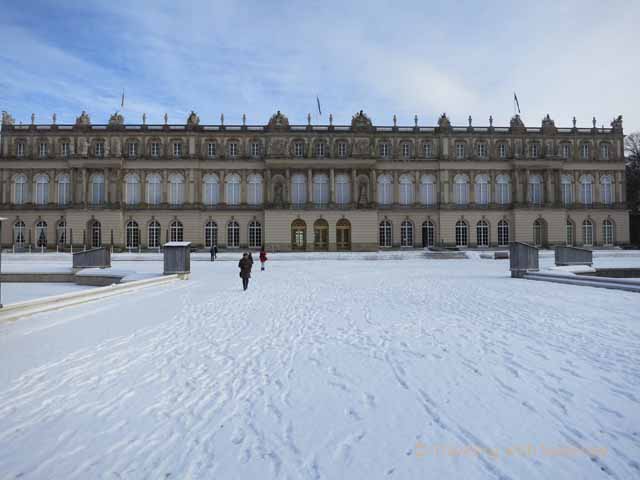 Below is a summer photo taken across the lake. 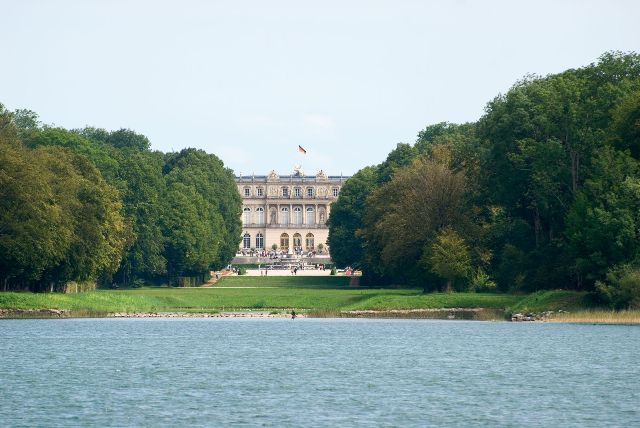 The scheduled tour of the palace was led by a friendly and enthusiastic guide, but since photos weren’t allowed you’ll just have to imagine the opulence of the interior. Only 20 of the 70 rooms were ever finished and of the planned two back wings one was never begun and the almost-completed North Wing was demolished in 1907.

The tour began in the State Staircase, a replica of the Ambassadors’ Staircase in Versailles. However, because the original was demolished over a century before Herrenchiemsee was built, some visitors come here to see what the Versailles staircase was like. The lavishness of the ornate rooms was really overwhelming; it was easy to see how Ludwig went bankrupt.

From the marble to the paneling to the porcelain and gold, no expense was spared and room after room revealed more extravagance — all intended to surpass Versailles. There was so much gold from floor to ceiling in the State Bedchamber in the State Apartment that I was compelled to ask if it was all real gold (of course, it was actually real gold leaf everywhere throughout the palace).

The room I liked best was the Great Hall of Mirrors. It ran 98 meters (25 meters longer than its counterpart in Versailles) along the entire front of the palace with windows to the garden and fountains. With 52 freestanding lights and 33 chandeliers, there were over 2000 candles (the chandeliers could be lowered for lighting). The room was spectacular in day time but I could only imagine what it would have been like at night with the candles lit and light reflecting from the many mirrors in each of the 17 arches on the left (east) wall pictured below. They hold summer evening concerts here and until 1982 still lit all the candles.

Among other interesting aspects of the palace was the bathroom with a swimming-pool-sized tub that was never filled. I think they estimated it would take many servants 20 hours to fill.

I think Sweeney’s favorite story was of the dining room with the “magic table” inspired by the Grimm’s Fairy Tale about the table that would set itself on command. The table could be lowered to the floor below, where it was set and the food was placed on it. Then it was raised to the room above for dining, the table appearing to have magically set itself. The kitchen was never used due to Ludwig’s very short stay. Instead the servants used the abbey kitchen.

Ludwig only spent about 10 days in the palace in September of the year before he died. The fantasy of Ludwig’s life seems very much symbolized in his palaces and castles. He was popular in Bavaria and elsewhere partly because of his youth and good looks and partly because his projects created jobs and prosperity. With the citizens of Bavaria in his time, he was also popular because he often traveled the countryside and spoke with people along the way, repaying hospitality with extravagant gifts. To the current citizens of Bavaria and Germany he is popular because the castle and palaces that he built (bankrupting himself) have been a tourist draw and significant revenue source.

Ludwig stated that he wanted to remain an enigma to himself and others and succeeded partly in that his death is still a mystery. When he was deposed, he was moved to Castle Berg on the shores of Lake Starnberg, south of Munich. The next evening he asked the doctor who had pronounced him mentally ill to take a walk on the grounds. They never returned but during a heavy storm that night were both found dead in shallow water near the lake shore.

I’m including an impromptu and candid video of Sweeney talking about King Ludwig’s Palace at lunch after our tour. I hope that you’ll enjoy it as much as I do.

For more information about Herrenchiemsee Palace and other Bavarian castles:
Bayerische Schlösserverwaltung