Matera: From the “shame of Italy” to European Capital of Culture 2019

Once called “the shame of Italy”, Matera continues its rebirth attracting worldwide attention for its history, culture, and extraordinary architecture and terrain. We spent several hours there on a recent trip to Southern Italy. Take a walk with us through Matera, European Capital of Culture 2019.

Imagine the cities of biblical times and you’ll probably come close to a vision resembling much of Matera in the Basilicata region of Italy. It’s not surprising that the city has been chosen as a location for a number of biblical movies, including The Gospel According to St. Matthew, King David, The Nativity Story, and the 2016 remake of Ben-Hur. In fact, I first heard of Matera because it was the location for key scenes in Mel Gibson’s movie, The Passion of Christ. 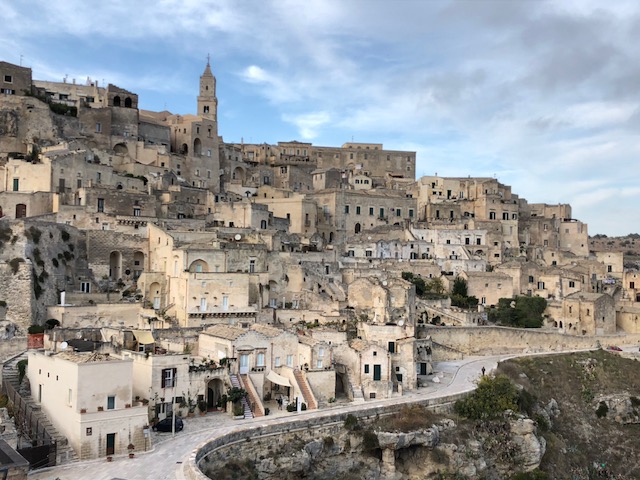 More recently, I’d seen articles about this fascinating city including Lonely Planet’s list of top cities to visit in 2018. Matera, first inhabited in the Paleolithic Age, seemed a city like no other that we’ve visited in Italy. So when we planned our second visit to the Puglia region, Italy’s “heel of the boot”, we decided to make this a day trip from our holiday rental in Ostuni. We expected to be impressed with Matera, but we were actually enthralled — by both ancient and contemporary aspects of the city.

A walking tour arranged by local tourism agency, Agenzia Viaggi Lionetti, with expert and engaging guide Nicola Taddonio, an archaeologist born and raised in Matera, was a perfect introduction to the city. These are just a few of the highlights of the tour.

Our first view (photos top and below) of the Sassi (Italian for the “stones”) di Matera, two districts of the ancient city Sasso Caveoso and Sasso Barisano, was from the panoramic viewpoint (Belvedere Piazzetta Pascoli) next to the Palazzo Lanfranchi. The view from here of the over 1,500 stone facade cave dwellings (including over 130 cave churches) cut out of the limestone hillsides was striking. As we gazed across the panorama, I was taken by the size of the old city and the uneven layers of dwellings built into the rocks in what appeared a helter-skelter fashion conforming to the natural hillside. 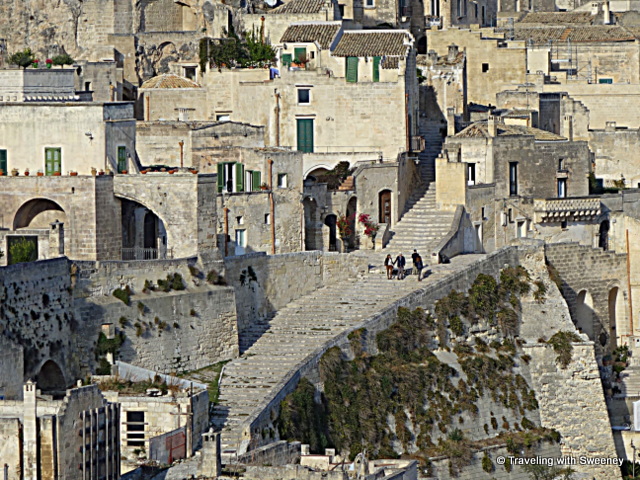 “Anyone who sees Matera cannot help but be awestruck, so expressive and touching is its sorrowful beauty.” — Carlo Levi, Italian artist, author, and anti-fascist activist (1902 – 1975), said of Matera in the mid-twentieth century

The dramatic scenes of crude dwellings built one on top of the other, particularly in the less-developed Sasso Caveoso (below), are reminders of the past when a century ago the city was known as “the shame of Italy”. In those days, the residents of the Sassi, often with large families as well as their animals, were living in conditions of extreme poverty and disease in their damp limestone cave houses. In the 1950s the Italian government displaced about 16,000 people of the Sassi into more modern housing in another part of the town where many had difficulties adapting to the social changes. The abandoned cave buildings in these sections of the city became the secret playgrounds for local children including Nicola who related his own stories. 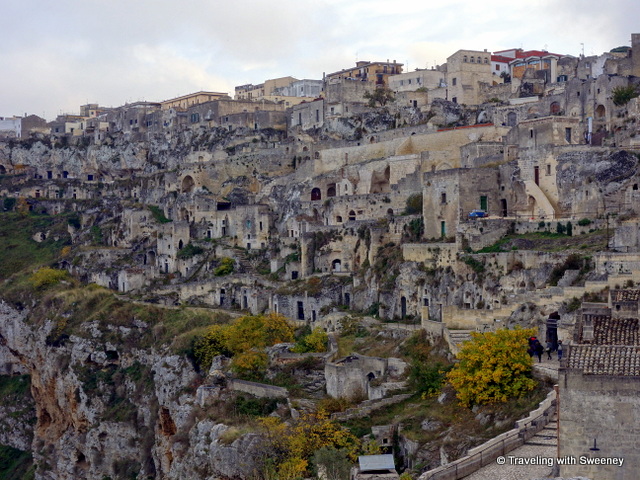 It wasn’t until 1986 that people came to live in the Sassi again. Then in the 1990s, modernization of the Sassi was actively encouraged by the Italian government to promote tourism. This was aided by the designation in 1993 of the Sassi di Matera as a UNESCO World Heritage Site based on its being “the most outstanding, intact example of a troglodyte settlement in the Mediterranean region, perfectly adapted to its terrain and ecosystem.” Entrepreneurs and developers continue to transform the cave dwellings into homes, shops, accommodations, and restaurants bringing progress while aiming to maintain the essence of the city’s unique appearance and history. 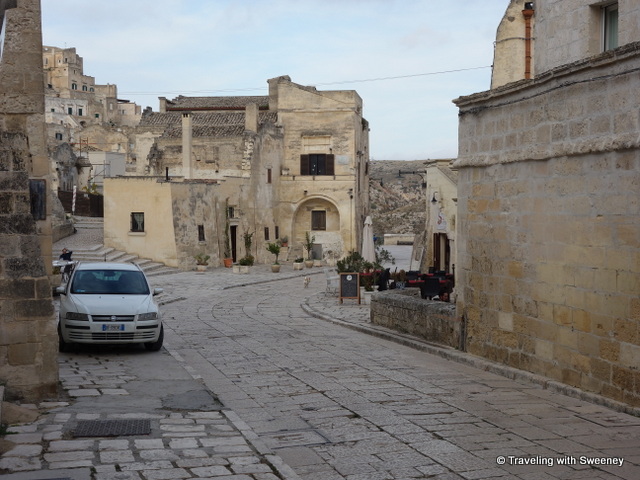 Designation as a European Capital of Culture brings with the title many opportunities for a city’s development, cultural enrichment, and international exposure. Matera, Italy, awarded the title for 2019, joins more than 50 European cities that have been awarded this title since 1985. Mr. TWS and I have visited other cities, such as Marseille, France and Guimarães, Portugal where this important recognition spurred pride in the people of both the city itself and the entire country and enabled many cultural programs and building initiatives.

Matera is now in position to have similar cultural developments and expected benefits. However, Nicola spoke about the concern some of the local residents feel about Matera’s new status as they are now seeing a significant increase in visitors as a result of the media attention and international recognition from being awarded the European Capital of Culture 2019 title. While most of the Matera residents are excited about the proposed developments, they also want to ensure that their city does not lose its soul as a result. 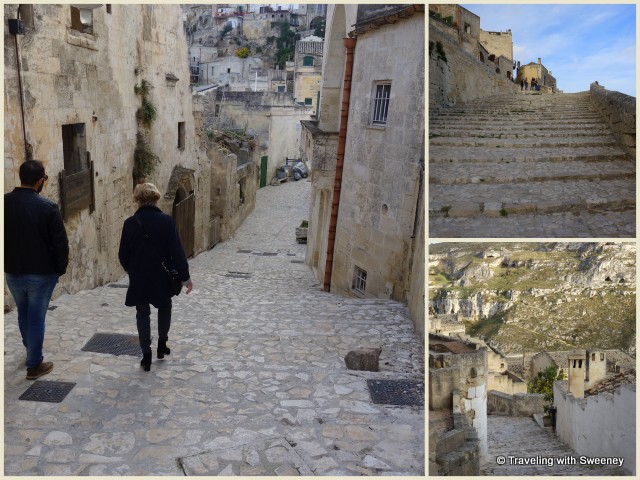 A walk through the Sassi of Matera with Nicola Taddonio

As we explored Matera on foot we were amazed as we wound our way in a sinuous maze of streets that seemed to be transported out of old Jerusalem. I also found fascinating the swatches of color against the raw stone backgrounds — shutters, doorways, pots, and flora. 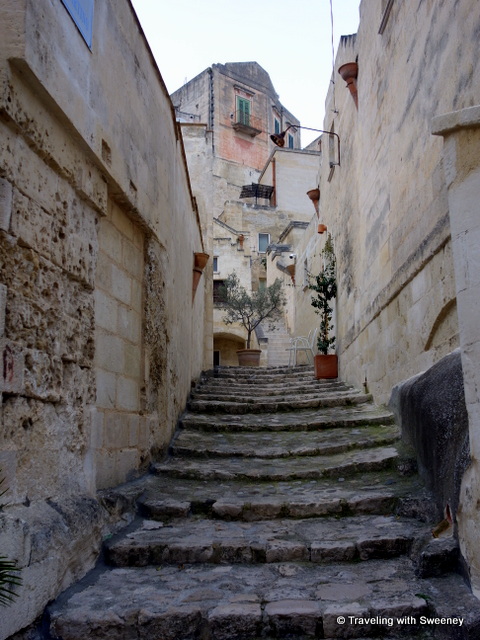 From several vantage points at the panoramic viewpoint and throughout the Sassi we were able to view the stunning sight of the Rupestrian (“built into rock”) Church of Santa Maria de Idris (shown below). 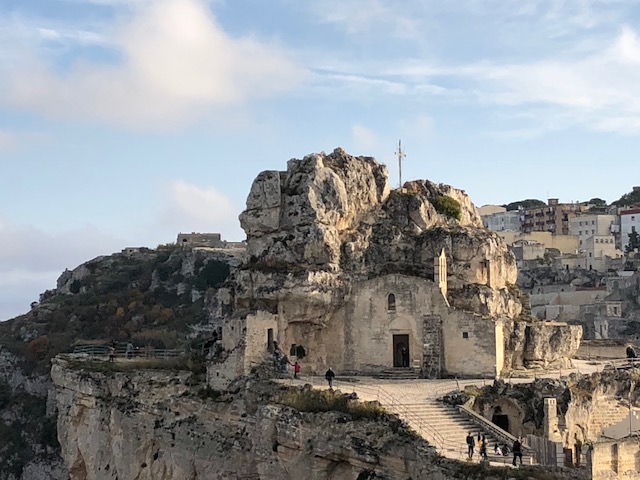 Stunning on the outside, the church has beautiful frescoes on the walls of its cavernous interior. With archaeological work that was performed, the layered frescoes display the styles of the various periods in which they were created. The layers resulted from the frescoes of previous ages being covered during renovations with fresh plaster and new frescoes of that age. (Photos were not allowed inside.) 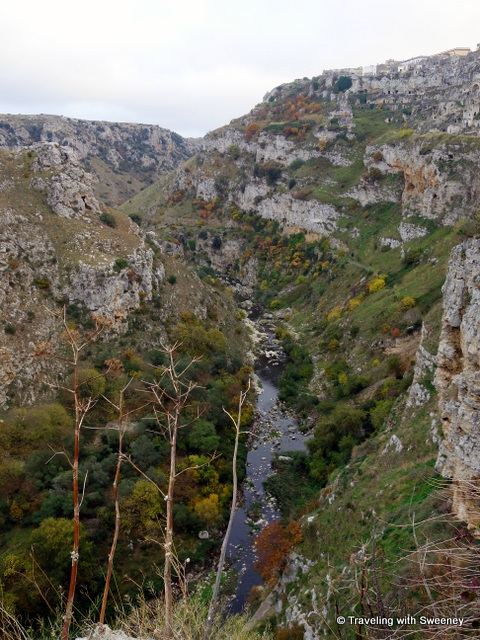 Along our walk, there were many sweeping vistas of cave dwellings and churches on either side beneath the plateau above the deep ravine carved by the Gravina River, which today is a mere trickle. 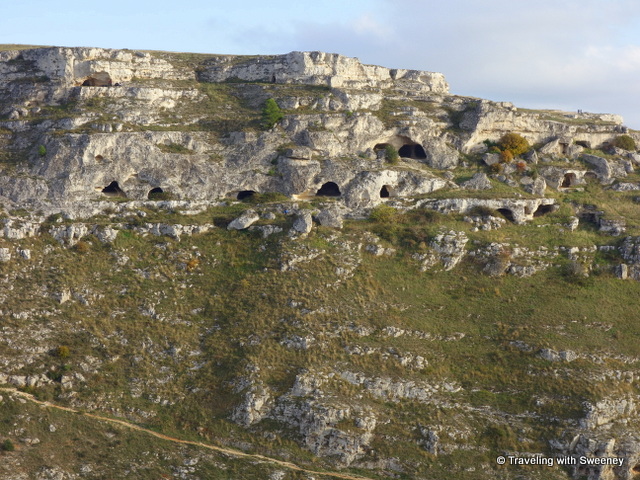 Nicola suggested that the next time we visit Matera, we must drive to the Murgia plain across the ravine from the Sassi where it is possible to hike down to the river, explore the caves, and get additional spectacular views of the Sassi.

With Nicola Taddonio in the cistern of Matera

At the end of our tour with Nicola, he had yet another surprise for us hidden beneath Piazza Vittorio Veneto — an ancient cistern (called Palombaro Lungo), the second largest in the world. Istanbul has the largest. We took many steps deep down into the cistern which was carved by hand in the 1700s to provide water collection for the city. The cistern is part of a wider complex water collection system beneath the city including a number of smaller cisterns. It had been forgotten for several decades in the twentieth century until rediscovered in 1991. Mr. TWS (always the movie buff) said he felt like he was viewing one of the water cisterns within the “sietch”, the cave communities where the Fremen lived in the Dune.

From the depths of the cistern, we once again emerged onto Piazza Vittorio Veneto and modern Matera’s shops, cafes, and restaurants. 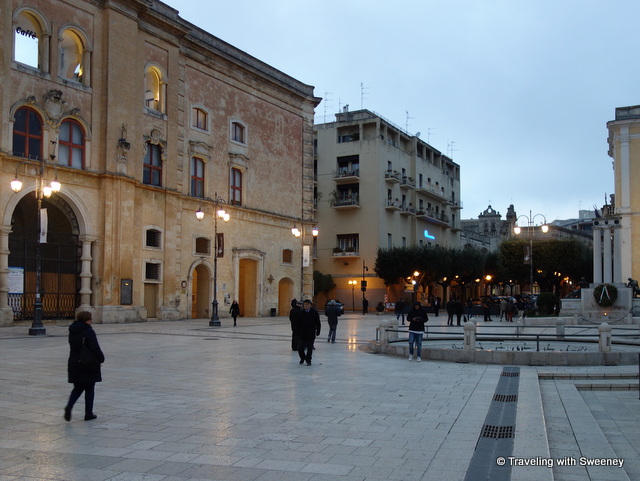 Piazza Sedile (shown below) was quiet on this cool November afternoon. Nicola said that it is often a lively square and his favorite in Matera for enjoying sunshine, coffee, and music. It is anchored by the 16th century Palazzo del Sedile, previously municipal offices and now the Egidio Romualdo Duni National Conservatoire, a national conservatory of music named for a composer from Matera. 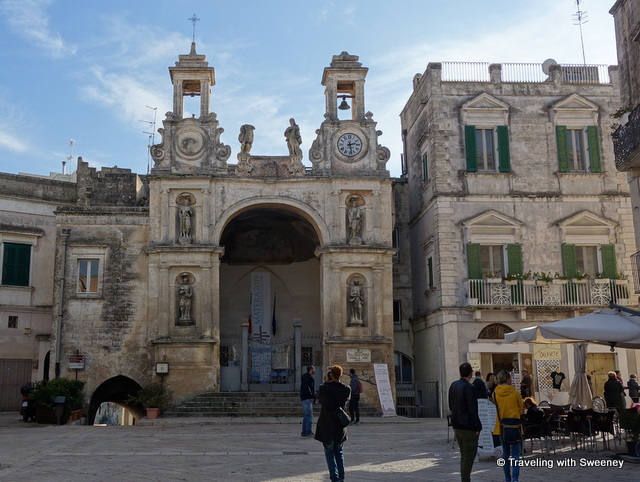 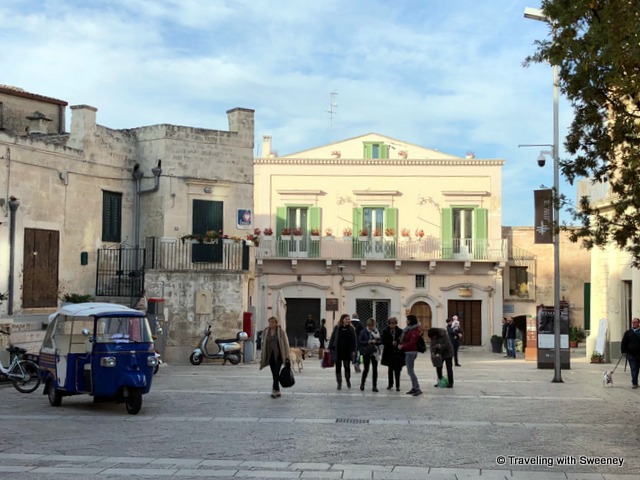 Tourists and shoppers in Matera 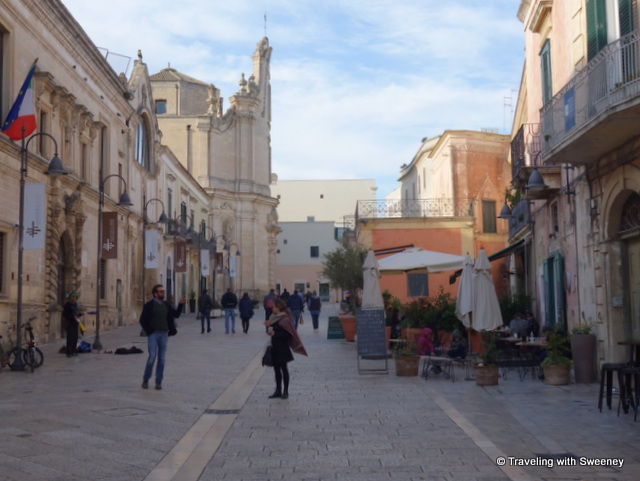 Tucked away adjacent to Palazzo Lanfranchi on Via Casalnuovo, is Area 8, a truly unusual and extraordinary venue for cocktails, food, entertainment, relaxation, and unexpected experiences. Warm and welcoming with its eclectic décor, it feels more like visiting someone’s home. It is a popular place for locals and visitors from all over the world to relax and feel at home. 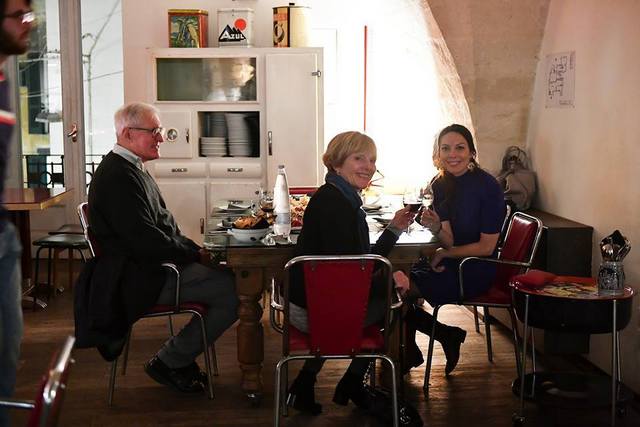 Feeling at home at Area 8 — Photo by Federica Donadi

In the photo above, our Ostuni host Elena, Mr. TWS, and I look quite at home, don’t we? During the day, the space is a tourism agency and media production house operated by Area 8 owners, Gaetano Lionetti and Mikaela Bandini. At night, the lights dim and it is a cafe, theater, gathering place, and creative events venue.  Gaetano and Mikaela were very enthusiastic hosts and we were able to share a fascinating conversation with Mikaela over dinner and wine. Gaetano and she are very passionate about Matera, and important forces in its evolution to a world travel destination. 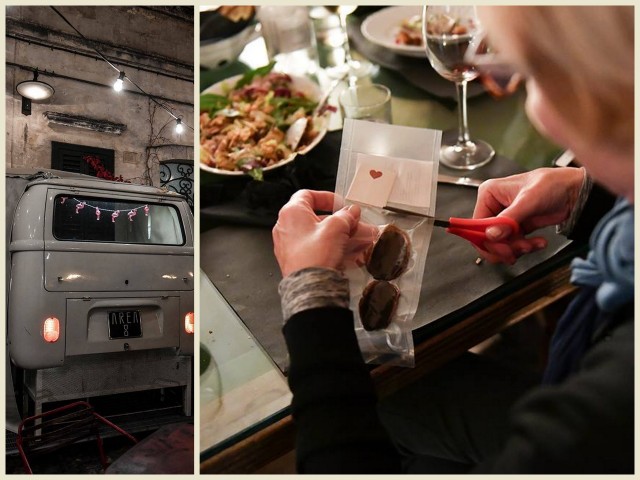 The unexpected at Area 8: Van in wall, opening my fortune cookies — Photos by Federica Donadi

Mikaela chose the Area 8 name after learning about Korbinian Brodmann, a German neurologist who became famous for his definition of the cerebral cortex into 52 distinct regions. Area 8 is a region of the human brain responsible for the management of uncertainty according to his studies. There was much I didn’t expect such as the eclectic decor, the van protruding through a wall, the many interesting activities and events they schedule, the somewhat addictive Tschips (one of Area 8’s signature dishes made with toasted Matera bread slices, olive oil, gazpacho, sun-dried tomato paste, and stracciatella cheese), or the 4 cookies presented by Mikaela that held fortunes for Mr. TWS and me (see below).

I’ll keep you guessing about those. 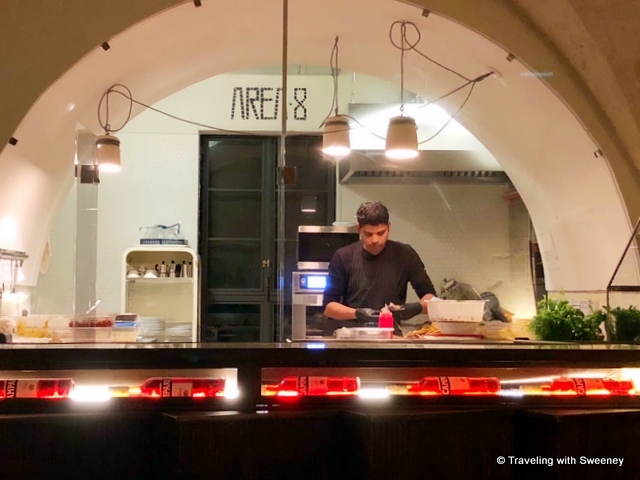 Before heading back to Ostuni for the night, we took another look over the rooftops of the Sassi from the panoramic viewpoint. At night, Matera takes on an even more mysterious look particularly on this night as a light fog hovered over the Sassi. 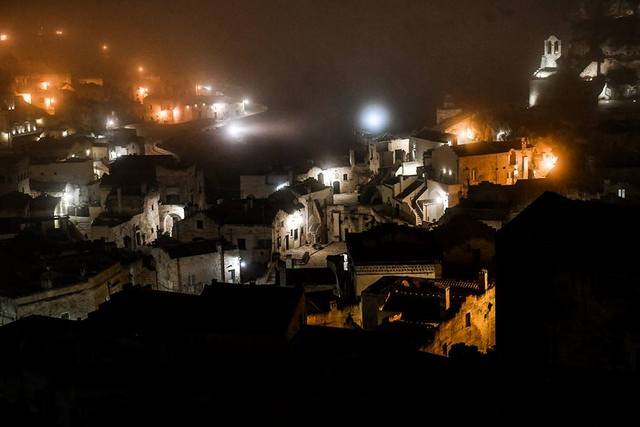 In the short time we visited, I got a sense that Matera will not lose connection with its past and history as it experiences the increase in tourism and interest around the prestigious European Capital of Culture award for 2019. The people we met are committed to seeing that doesn’t happen as they enjoy the benefits of progress and international exposure — building on Matera’s strengths and showing the best of the city with pride.

When you visit Matera, we highly recommend a tour with Nicola and a visit to Area 8 in the evening. Thanks to Agenzia Viaggi Lionetti and Nicola Taddonio for the fantastic tour and Area 8 for their generous and warm hospitality.