Viking cruises are destination-oriented and offer a wide variety of included and optional excursions at each port. We’ve found the included  tours to be very good with high-quality guides, but we also recommend considering a few optional excursions for your cruise itinerary. Many of these provide a more immersive experience and often go beyond the main attractions of a place that might be featured on an included tour.

A popular post on the TWS blog — “Viking Shore Excursions, Should You Take Them?” —  offers our readers advice, tips, and examples of our favorite excursions on our previous ocean and river cruises. After our recent Viking ocean cruise, I’ve got a few more recommendations for those considering the optional excursions on the Mediterranean Odyssey cruise or other Viking itineraries that include the same ports.

Wining and dining in Corfu and Tuscany

Sumptuous lunch on a hilltop in Corfu

This tour begins with a walking tour of Old Town Corfu, a UNESCO World Heritage Site, and includes time strolling along the narrow streets and a guided visit to Casa Parlante, a museum depicting aspects of life in a house of 19th century nobility, and other landmarks. But the main event is just a short drive by coach up into the hills to the Villa of the Roses overlooking Kommeno Bay. 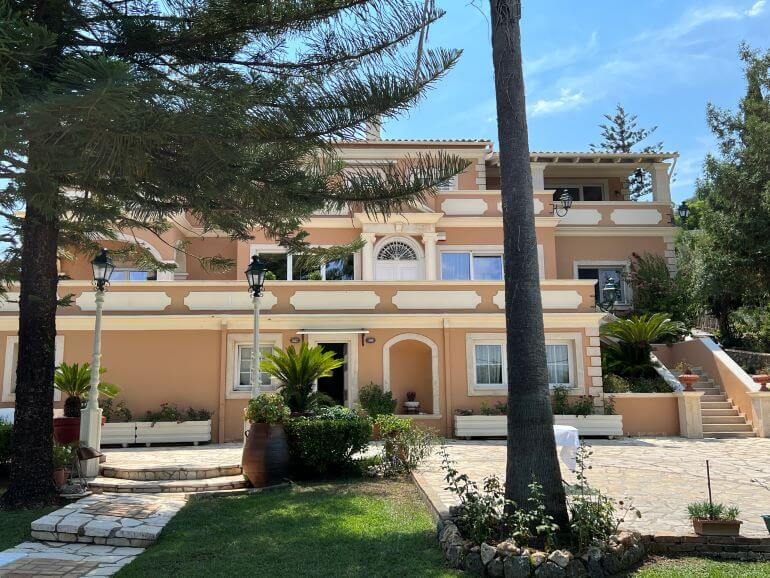 Villa of the Roses, Corfu

Here we were treated to a cooking lesson by our engaging host and resident chef of the villa followed by a leisurely lunch on the lush garden terrace. Although the weather was quite warm in the crowded town below, refreshing breezes cooled us we watched, learned, and then savored our meal and wine while enjoying conversation with others in our small group of under 20 people.

Our host and resident chef at the villa in Corfu

Our meal consisted of yogurt dip for spreading on bread as an appetizer, Greek salad (of course), traditional beef moussaka with béchamel sauce for a main course, and baklava for dessert. It was all delicious! 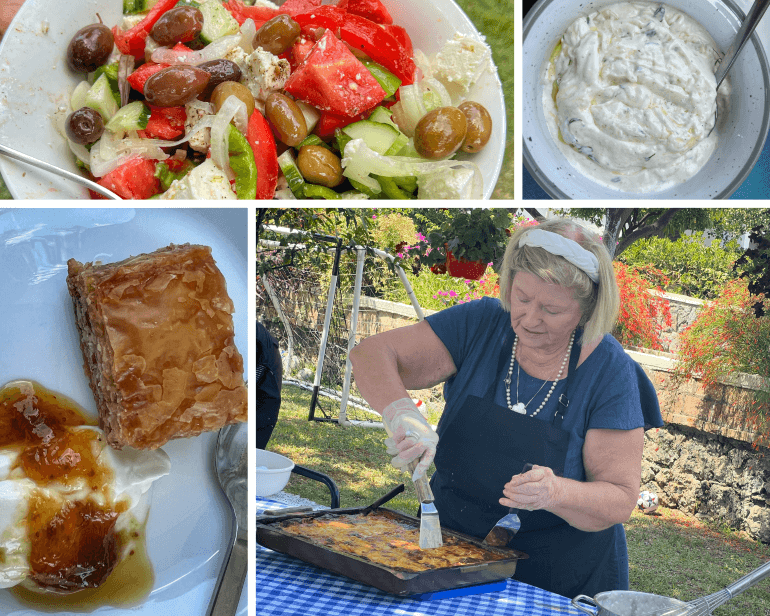 Our host also served us a Corfu specialty, a kumquat liqueur, and joined us in a toast. It was a delightful way to end a lovely afternoon. 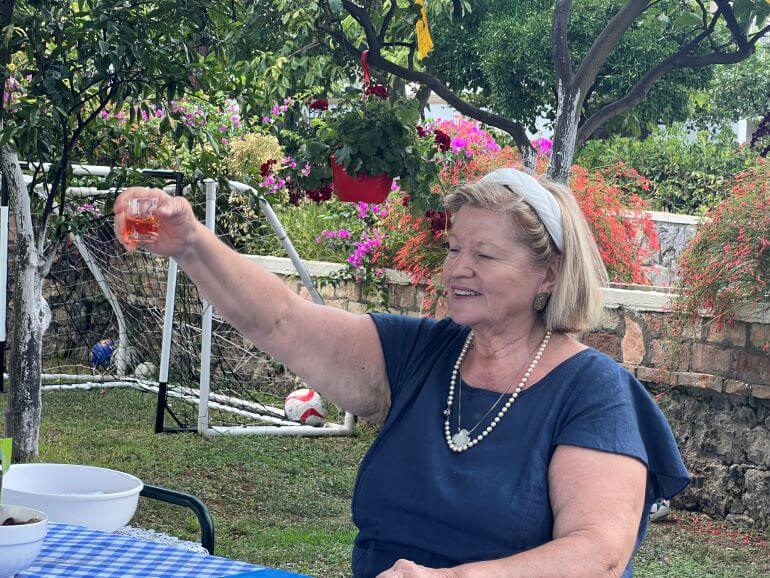 A return to Tuscany

We were excited to return to Tuscany, one of the captivating regions of Italy that we’ve had the pleasure of visiting before. I don’t think it’s possible to have too much of Tuscany — or many other places in Italy, for that matter. 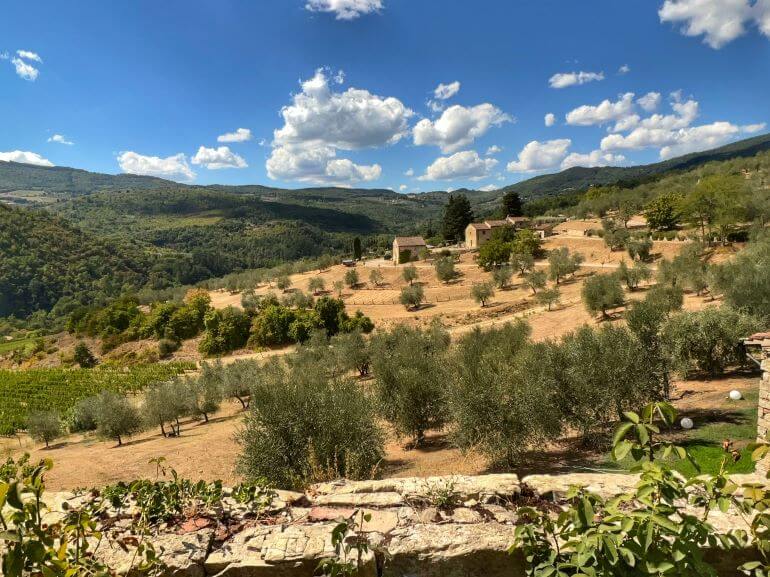 The beauty of the countryside and cultural highlights of cities like Lucca and Florence are reason enough to entice one to visit Tuscany, but the experiences are totally enhanced by enjoying the region’s food and wine delights. To get a chance to have a cooking lesson, followed by a wonderful meal in a castle surrounded by vineyards and olive trees, is an experience made even better. 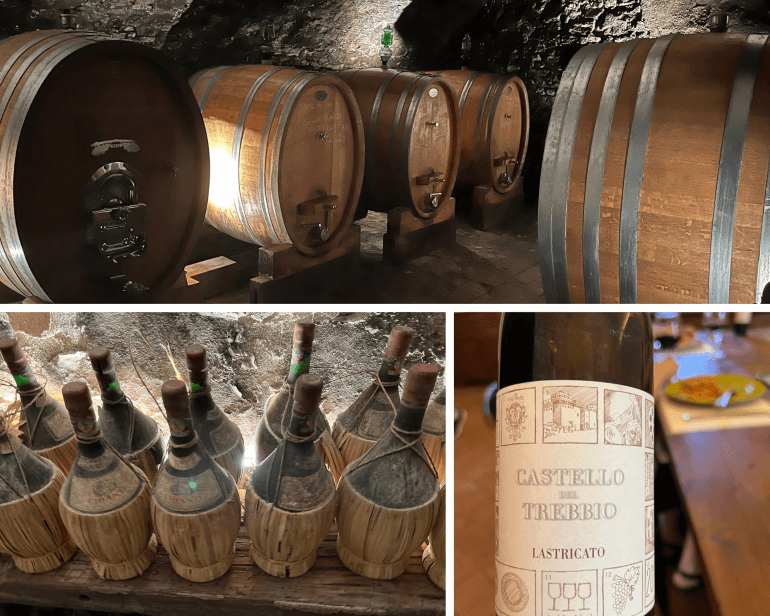 Originally owned by the Pazzi family of Florentine nobility, Castello del Trebbio is now owned and operated by the Baj Macario family. During the tour, we were guided through the wine cellars and parts of the family living quarters, including the room that is notable as the location where the planning of the failed “Pazzi Conspiracy” (the plot to remove the Medici family as rulers of the Renaissance) took place. 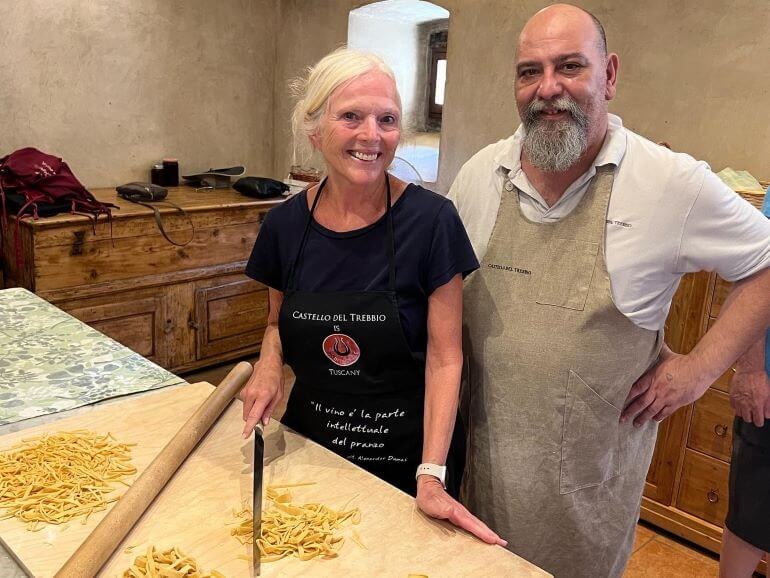 With the chef in the kitchen at Castello del Trebbio

And then, it was into the kitchen to meet the chef, don an apron, and get ready to learn about pasta making and preparing traditional Tuscan dishes with fresh local ingredients. The meal itself was the highlight served at a long table in the dining room and paired with estate wines, including a very special 100% Sangiovese wine. It was interesting to learn that all of their wine production uses Biointegrale® methods of ethical agriculture. 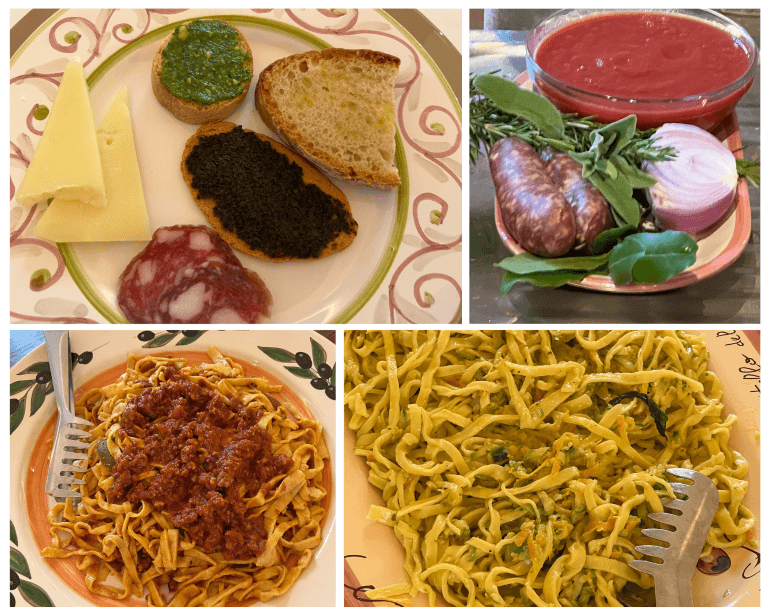 We left feeling fully satisfied with our afternoon at a Tuscan castle and made a promise to ourselves to make it back to Tuscany again. 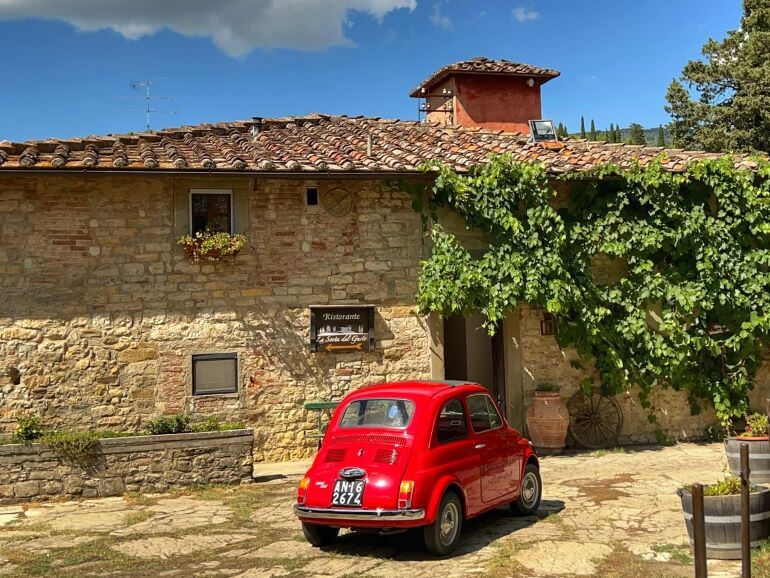 Back in time to ancient Rome

When in Rome … go to Ostia Antica

Viking excursion option: “Picturesque Ostia” 5 hours (We highly recommend this tour for guests who have previously visited Rome and are interested in digging deeper into ancient Roman history.) 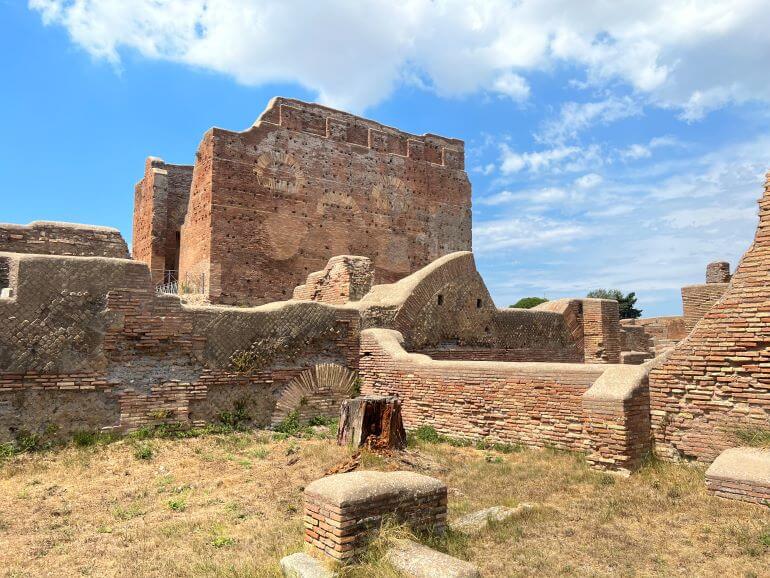 The Capitolium, a temple dedicated to Roman gods

I  didn’t know about Ostia until I was considering shore excursion options prior to our cruise. We’ve been to Rome twice and experienced the grandeur of the major Roman sites and enjoyed time in less touristed neighborhoods, so I was looking for something a little different. The excursion to the impressively well-preserved and well-maintained Ostia Antica (Ancient Ostia) was perfect and since its not well known to most tourists, we felt like we had the place to ourselves. So let’s keep it our secret. 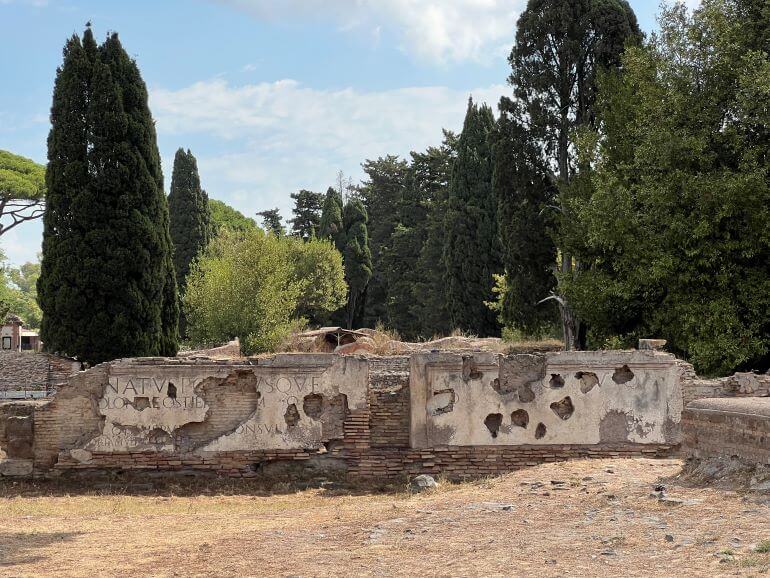 Inscription on the wall of the city gate

I read that the inscription on the old city wall shown above gives credit to Rome’s leader for the reconstruction in the 1st century AD and is generally translated by experts as:

The Senate and People of Rome
gave walls and gates to the colony Ostia.
Marcus Tullius Cicero made and oversaw it.
Publius Clodius Pulcher completed the work and approved it.
The gate, deteriorated because of old age, … 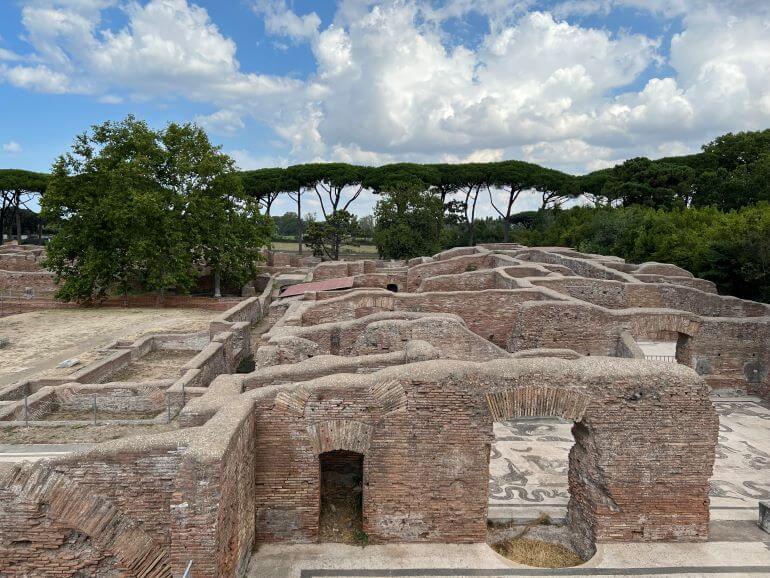 Baths of Neptune at Ostia Antica

Positioned at the mouth of the Tiber River, Ostia was established around 620 BC originally as a naval base, but in the 2nd century became Rome’s major port and a key trading center on the Mediterranean trade routes. For centuries, Ostia was a wealthy and thriving community, and the city’s vast ruins are excellent representations of the lifestyle and culture of the people who lived and worked there during ancient times.

We were able to walk along the ancient Roman streets and among many significant excavated areas of the 300+ acre site. The excavation, ordered by Mussolini for a World’s Fair, was done between 1938-1942. There is still about two-thirds of Ostia to be excavated. Imagine what additional treasures will be discovered someday. 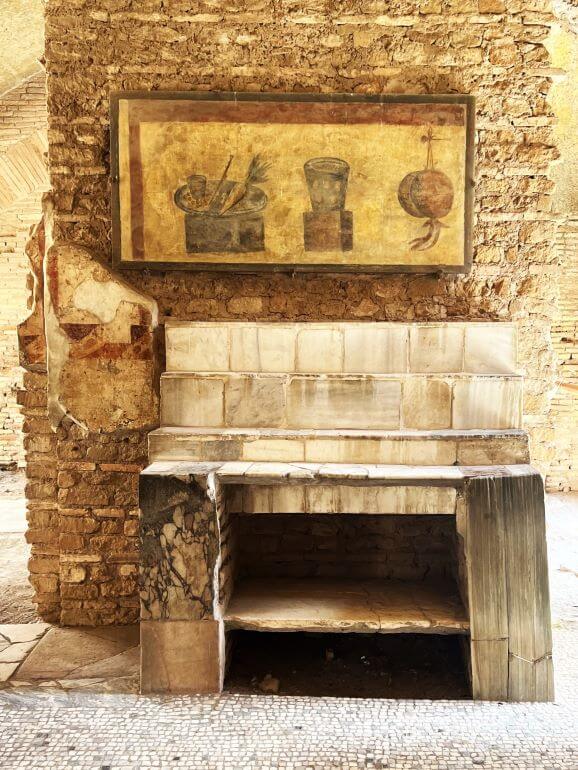 There are about 50 identified key areas in the ancient community including temples, shops, residential complexes, public baths, public latrines, tombs, a 4,000 seat theater, bakery, fountains, a “House of the Wine Bar”, and a fulling mill (area where clothes were cleaned and dyed). You might be as surprised as we were that urine (collected in publish urinals) was used as bleach. 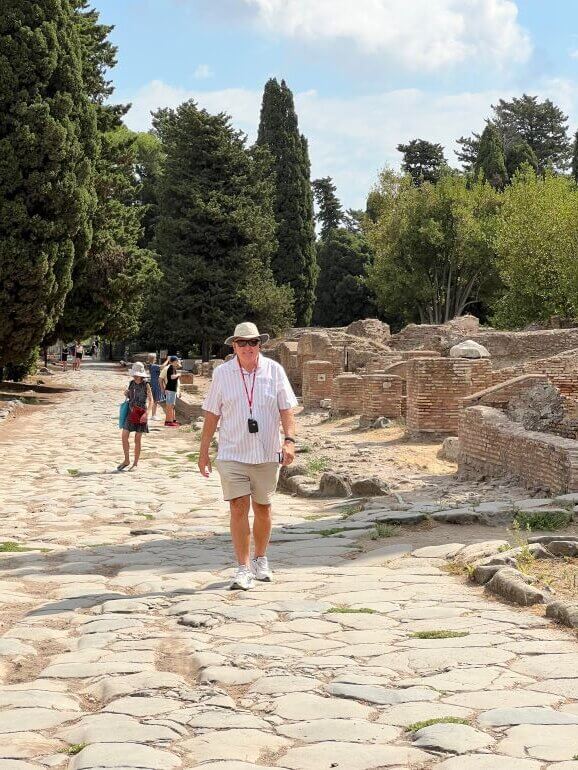 Mr. TWS on the ancient Roman road in Ostia

Walking along the ancient Roman road (the main street is shown above) there are even some markings that still show the ruts of the carts that once traveled across them. 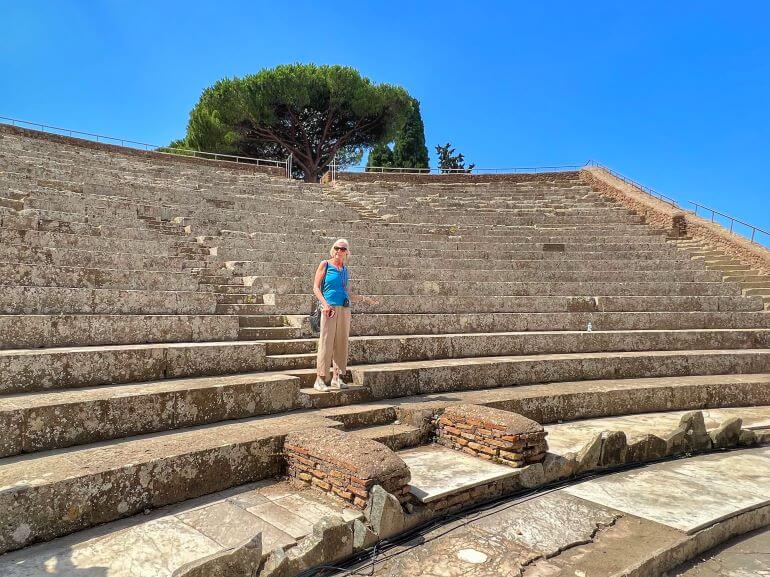 Small section of the 4,000 seat theater of Ostia built in 1st century BC

After centuries of economic problems, pirate attacks, invasions, and other historic events, residents left the community and it was completely abandoned by the 9th century AD. Although silting caused by the Tiber River created two miles of land between the city and coast, ending its days as a major harbor port, the silt ultimately protected the site giving us this amazing place to visit today.

We’ll have more to tell you about other experiences, destinations, and activities from our cruise in future posts.

Do you have favorite Mediterranean cruise shore excursions to recommend? 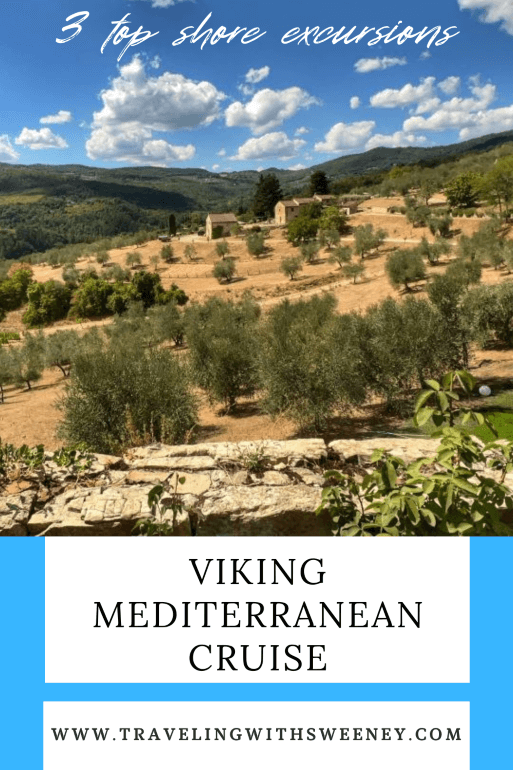 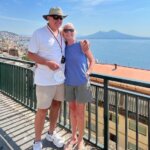 4 thoughts on “Wine, Dine, and Back in Time on Mediterranean Cruise Shore Excursions”