Editor’s recommendation: Although we can’t be traveling during the COVID-19 pandemic, we can immerse ourselves in the history and beauty of faraway places by virtual tours. Here’s a good one from Get Your Guide: Virtual Tour of Ancient Rome

Rome: The Eternal City — How do you begin to take in 2,500 years of civilization during a short visit?

With only three nights to spend on our first visit to Rome, we needed to figure out how to make the most of our time in order to see the major sites, and yet be able to wander and explore on our own. 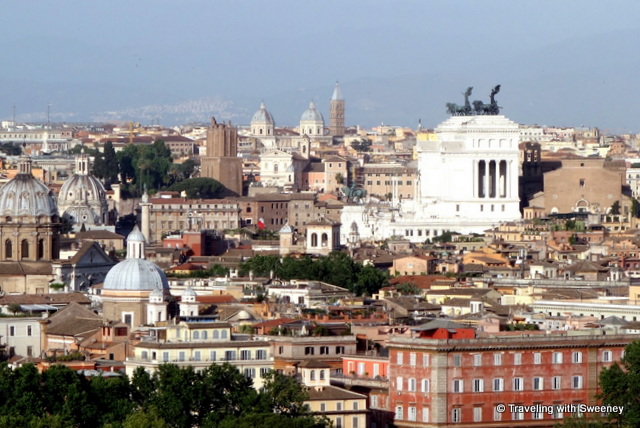 A hilltop view of Rome: The Eternal City

I decided to check out what might be available through Walks of Italy because I’d heard a lot of good things about the quality of their tours. “Rome in a Day” sounded like just what we needed. On this six-hour tour (a combination of their “Best of Rome with Colosseum and Historic Center” and the “Highlights of the Vatican” tours) we hit many of Rome’s most famous attractions with our knowledgeable, friendly, and very entertaining guides. So come along as we share some of the highlights. You may be surprised at all that we were able to see in just a few hours.

As we walked around Rome viewing dramatic scenes of ancient ruins and famous landmarks, the old cliché that “Rome wasn’t built in a day” really hit home. Remnants of Rome’s grandeur remain in the many ruins of the city. There are the well-known sites and there are also those that appear unexpectedly — bits of façade or columns exposed in excavations, some of which are quite recent as new archaeological finds continue. 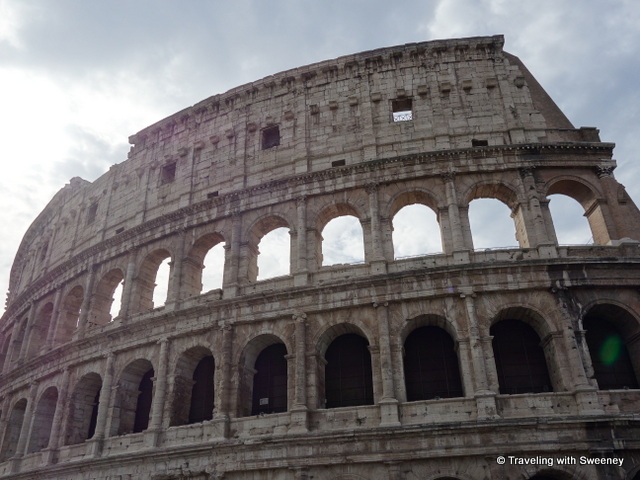 Probably the most iconic of the ancient Roman sites, the Colosseum impressed me more than I expected after a lifetime of seeing photos. It really does represent the grandeur of Rome perfectly. I’m sure my positive impression of visiting was enhanced by the fact that we had privileged access as part of the Walks of Italy tour group allowing us to bypass the long lines for tickets and entry.

It’s amazing to think about the events that took place in this amphitheater, the largest one in the Roman Empire, built in the 70s AD.  We entered through the imposing arches (there are three levels of them) that provided access to the seating areas where 50,000 spectators would witness gladiator fights, gruesome public executions, and other “entertainment”. We learned that the seating areas were assigned depending on social class and women were relegated to the least desirable seats at the top. The efficiency of the design amazingly enabled clearing the 50,000 through the 80 exits in just a few a few minutes. We also learned that a retractable canvas top was used to cover the seating area. 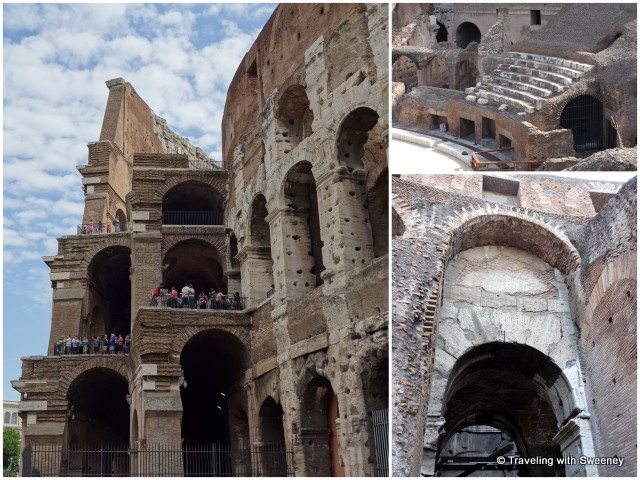 Though I’d seen representations in movies, I was still surprised that the elaborate mechanisms beneath the wooden floor of the arena for moving stage effects or raising animals or combatants actually existed. Legend even speaks of the flooding of the arena floor for mock water battles — the Cirque du Soleil effects of ancient times. The grim fact that the sand that was put on the floor not just to reduce slipping, but to soak up the blood of combatants made the reality of some of the horrors strike home for me. The barbarism that went on here seems such a contrast to the architectural beauty and grandeur. 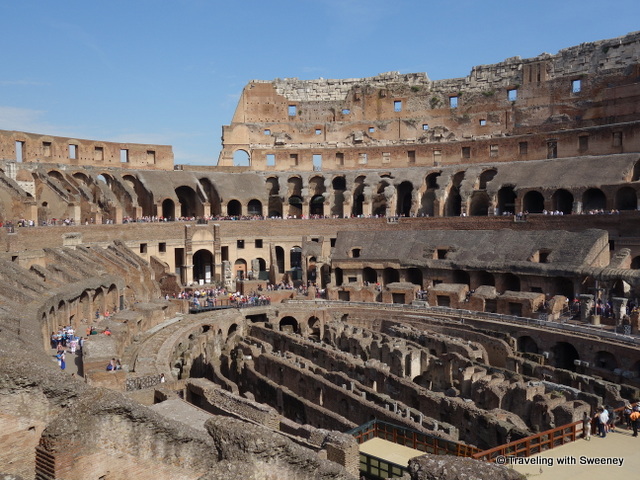 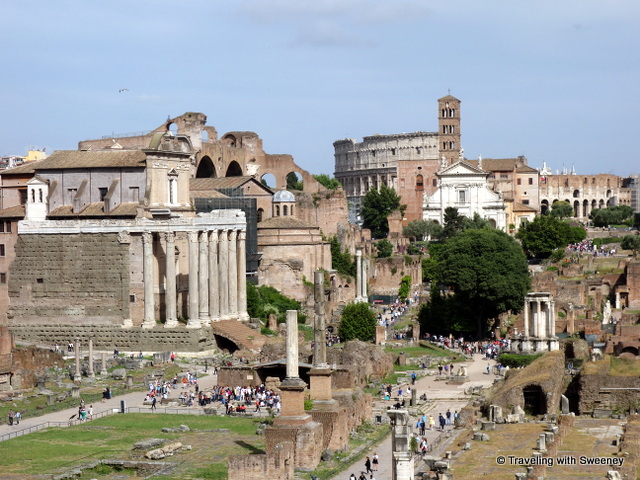 As a first-time visitor to Rome, I was in awe of the sights we were able to see as we walked along from the Colosseum, passing by the Roman Forum (which we did not tour, but the Walks of Italy ticket allows entry on your own through the next day). This was a central area of basilicas, temples, squares, and government buildings where business was transacted, people congregated, and nobility ruled.

We had taken a walk the previous night that took us by the Pantheon after opening hours. I loved the dramatic effect of the subtle lighting on the facade as we stood in the Piazza della Rotonda. 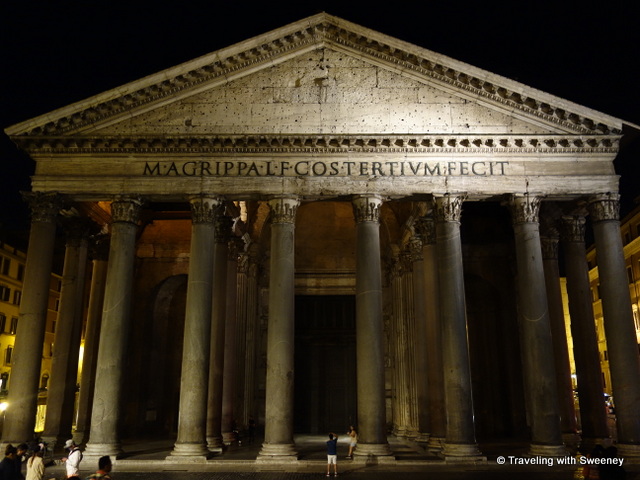 The columns of the Pantheon portico at night

During the tour, we went inside. The 1900 year old Pantheon, the best-preserved ancient building in Rome, was built between 70 AD and 82 AD as a temple to the seven deities of the seven planets. It has been a Christian church since the 7th century. The concrete dome is the largest unreinforced dome in the world. The open oculus lets in natural light and during heavy rain storms there is momentary flooding of the floor until it’s emptied shortly after by the efficient draining system. 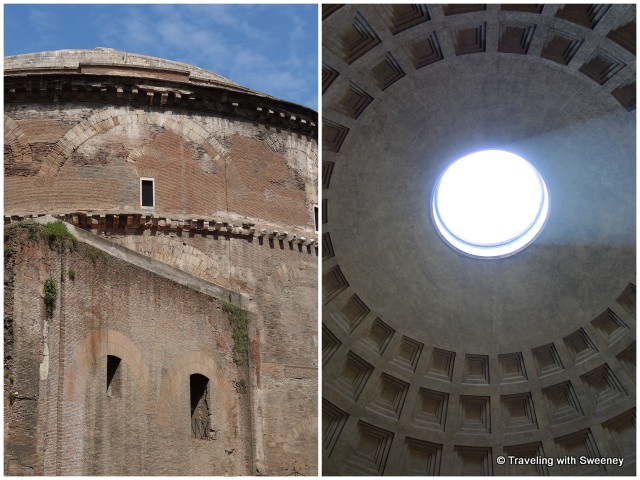 The Column of Marcus Aurelius 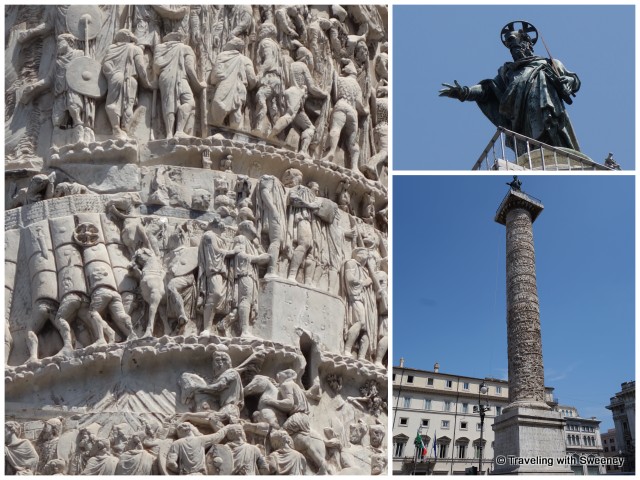 The Column of Marcus Aurelius

This Roman victory column in Piazza Colonna was built about 180-190 AD in honor of Roman emperor Marcus Aurelius to commemorate his military campaigns. Made of 28 blocks of Carrara marble, it features a spiral relief with incredibly detailed carvings telling the stories of various battles, including the Roman Danubian Wars.

Legend says that in 19 BC a virgin helped technicians locate a source of pure water about 8 miles from Rome. That scene and others are depicted on the facade of Palazzo Poli, the Trevi Fountain’s majestic backdrop. The fountain which was built in 1732-62 commemorates the arrival of the water.

I didn’t expect to get close enough to the Trevi Fountain to toss my coins into the water, so I wasn’t disappointed by the crowds as we passed in front of it. I was prepared for that but not that the fountain was undergoing restoration, but I guess in order to keep these treasures around, that must be done from time to time. I had learned from a 60 Minutes piece that numerous restoration projects under way in Rome are funded by patriotic moguls from the Italian fashion industry. The trend was begun by Diego Della Valle of Tod’s who donated 25 million euros for the restoration of the Colosseum, spurred by his Italian pride. Other fashion industry moguls followed suit donating funds to finance repairs for other Rome landmarks, including Fendi for the Trevi Fountain and Bulgari for cleaning and repairing the Spanish Steps. 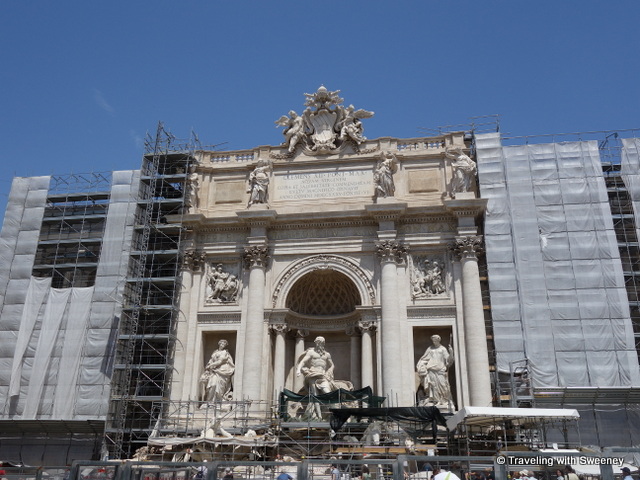 Of the many fountains in Rome, it is the largest and probably the most famous, in part for it being a prominent feature in movies, such as Three Coins in the Fountain, Federico Fellini’s La Dolce Vita, and Roman Holiday with Audrey Hepburn. I used my imagination to envision the fountain in a more romantic light as portrayed in those films and hope to come back sometime after restoration and in the early morning before the crowds.

At the Piazza di Spagna (Spanish Square), tourists flock to the Spanish Steps — 135 stairs up to the Piazza Trinità dei Monti. Our guide provided historical background and interesting stories, such as how and why the building of the Spanish Steps in 1723–1725 was funded by the French to link the Bourbon Spanish embassy in the piazza below to Chiesa della Trinità dei Monti, the French church above the square which was commissioned by the King of France. The Spanish embassy is still located in the Piazza di Spagna. It was fun to see the location in person after seeing so many pictures and prominent film appearances such as in Roman Holiday.  We’ll go back at a quieter time to experience sitting on the steps. 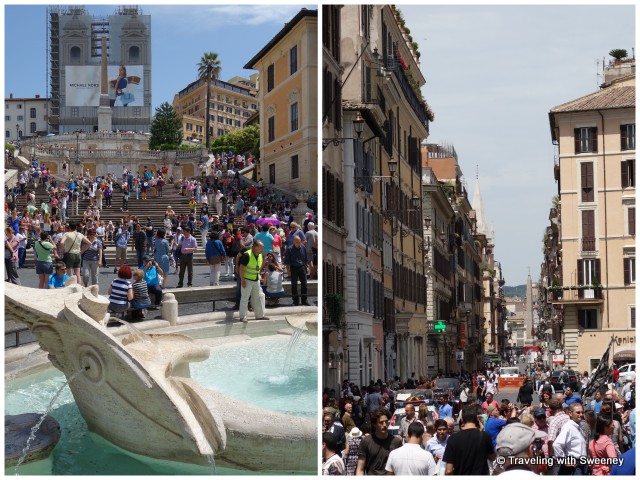 There were many sights to catch my eye as we walked along the streets of Rome from one attraction to the other, such as the shopping areas pictured below. 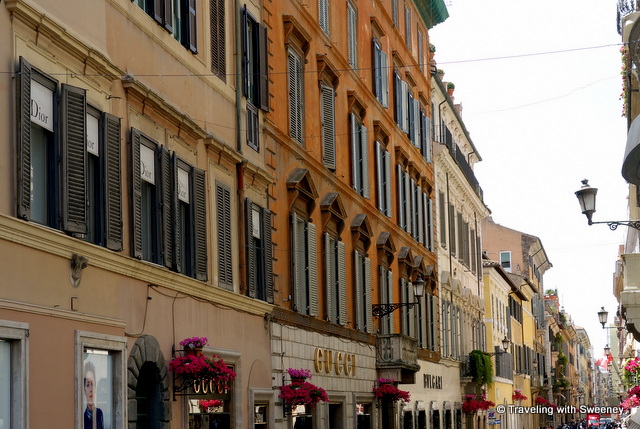 Designer shops on Via Condotti

While the well-heeled are shopping at Dior, Ferragamo, Gucci, Bulgari and other high-end designer shops on Via Condotti, members of the clergy are window-shopping for ecclesiastical garb and wares along Via dei Cestari. As we walked, I glimpsed a young priest admiring the wares in De Ritis, one of the oldest and most popular shops in the area. Until the tour, I never thought about where clergy members purchase their clothes. With the huge number of priests, seminarians, nuns, and novices who spend time in Rome, it makes sense that there would be so many shops with a religious specialty. Among them are shops that provide clothing and accessories for the pope himself. It’s not as common a sight in U.S. cities to see such a high percentage of priests and nuns, so it often made us take note – especially as we saw them walking around with full religious attire but accessorized with cell phones, earbuds, and shopping bags. 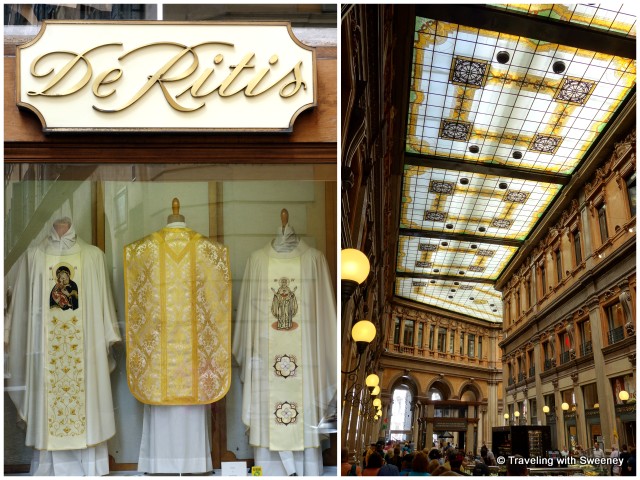 All tours should include gelato!

A generous serving of gelato is included as part of the tour. After our visit to the Pantheon, we stopped at Della Palma gelateria which is just a very short walk from there on Via della Maddalena. The timing was perfect; we were ready for a treat. The gelateria has 150 kinds of gelato, so it took a while to investigate them and choosing was a challenge. I ultimately decided on my go-to flavor, chocolate.  Mr. TWS had pistachio and deep, dark, chocolate. It was really good, but I have no way of knowing if it’s one of the best in Rome. Any gelateria suggestions for our next visit? 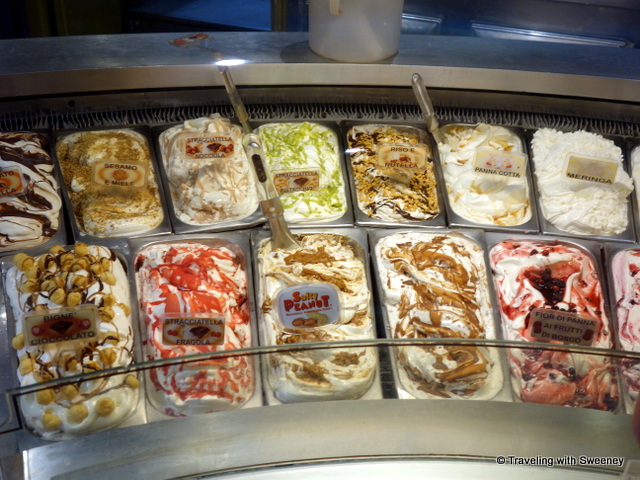 A few of the 150 flavors available at Della Palma gelateria

We were very pleased that the tour had met our objectives so well. Our guide secured taxis for each of us, took care of payment and we were on our way over the Tiber River for the second part of our walking tour of Rome in Vatican City.

This map isn’t an exact representation of our tour, but is meant to give you a general idea of the locations and routes of the “Rome in a Day” walking tour.

Our “Rome in a Day” tour was hosted by Walks of Italy, but our opinions and perspectives are totally our own — as always.

As an affiliate of Get Your Guide, we will earn a small commission (at no extra charge to you) if you book and complete their tours.

45 thoughts on “Rome in a Day: The Grandeur”