Mr. TWS always looks forward to visiting historic places, especially those in which his interest had been sparked many years ago as a young boy in northern Wisconsin. Such was the case with Pompeii. So I’ve asked him to share his perspectives about our day trip from Rome to Pompeii and Sorrento on a tour with Walks of Italy.

A fascination with history

I think the beginning of my love for travel stems from my interest in and love for history. My interest in history bloomed in the sixth grade with my excellent teacher who enthusiastically spoke of ancient history and inserted many fascinating stories and personal feelings into his absorbing narratives. Particular stories really had a lasting impact and among those was the story of the apocalyptic destruction of ancient Pompeii by the eruption of the Mount Vesuvius volcano in AD 79. The thought of the instantaneous destruction that froze people in place was both frightening and fascinating to me. 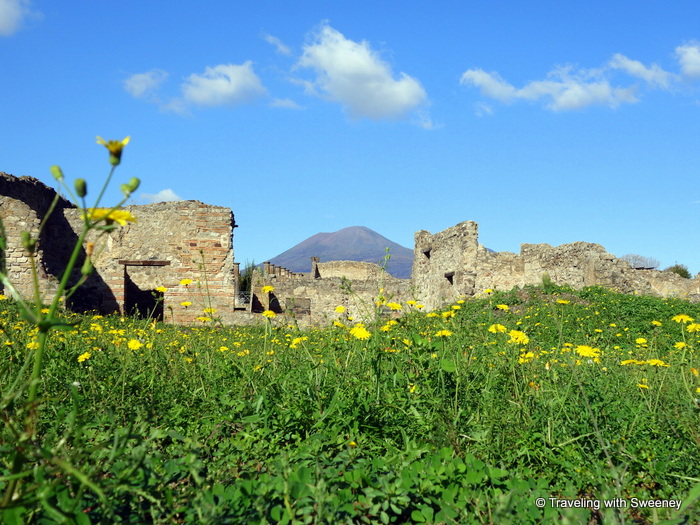 The walls of Pompeii with Mount Vesuvius looming in the background

Pompeii tour with Walks of Italy

Our tour began in Rome early on a clear sunny morning. As we traveled by coach through the beautiful rural areas of the Campania region, our guide provided an interesting narrative pointing out key viewpoints and important historic locations. For example, she mentioned the Appian Way (another tidbit from my teacher that had intrigued me and now has regained my attention as a place to explore on a future trip) and pointed out vistas of the Apennines and picturesque landscapes. Nearing our destination, we saw Mount Vesuvius looming over the area.

Highlights and surprises of Pompeii

The archaeological discovery of Pompeii revealed many details of the way of life within the Roman Empire at that time so perfectly preserved by the volcanic ash that covered the city. What an amazing place to visit and see this window in time revealing a thriving city during a fascinating period in history, the Pax Romana. 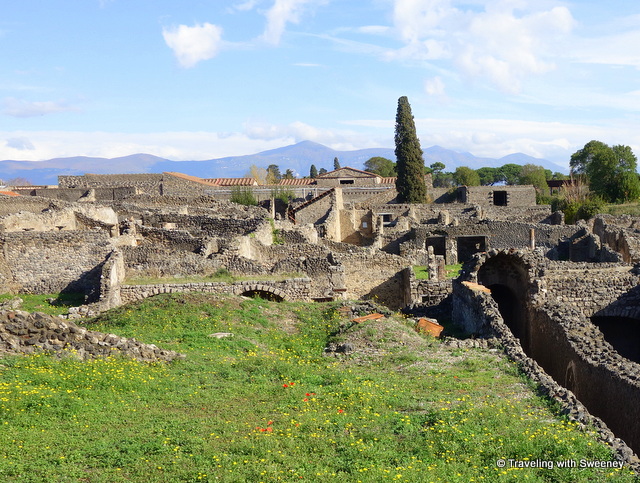 It occurred to me that with Vesuvius still an active volcano, we were potentially vulnerable to Pompeii’s fate. The thought quickly faded as I sighted the ruins of Pompeii and became excited with thoughts of what we were about to see there today.

Mount Vesuvius looming over Pompeii and the surrounding area

Our expert archaeologist Walks of Italy guide was very knowledgeable and enthusiastic about all aspects of Pompeii, its history, and archaeological findings as she led us on an informative and enjoyable walking tour of Pompeii. My first impression as we began the tour and had our first glimpses of the city was that Pompeii was a much larger city that I had expected. I had always envisioned more of a village, but in the first century Pompeii was a thriving city populated by around 11,000 people (or more depending on which estimate you use — the surrounding area brought the total to at least 15,000). 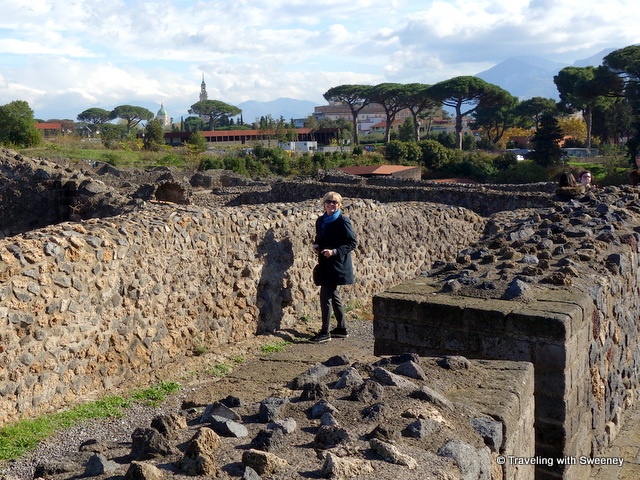 Sweeney walking Pompeii streets during the Walks of Italy tour

We walked along the many streets of Pompeii stopping at key buildings along the way, especially ones that displayed particular aspects of Pompeii life, structures, art, or implements. Our tour was well-paced, enabling us to get questions answered and cover and explore most of the large area.

I was also surprised at how much of Pompeii had been excavated — about two-thirds of the area of the city. Its wide paved major streets, an expansive forum, and a large amphitheater were among the highlights that show that Pompeii was a city of significance at the time of the devastating eruption. Many important Romans owned houses there and it was also a vacation destination for other Romans. 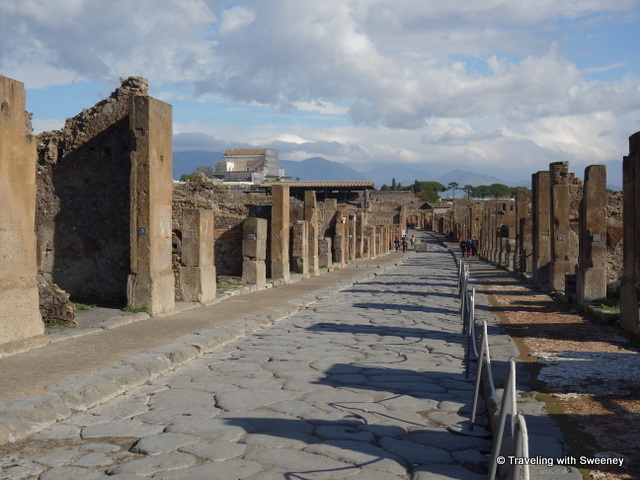 The amphitheater was one of my favorite aspects of our tour. It is believed to be the first Roman amphitheater to have been made of stone. It is the oldest surviving Roman amphitheater (built about 70 BC, it is over 100 years older than the Coliseum), and seated somewhere between 12,000 and 20,000 people. 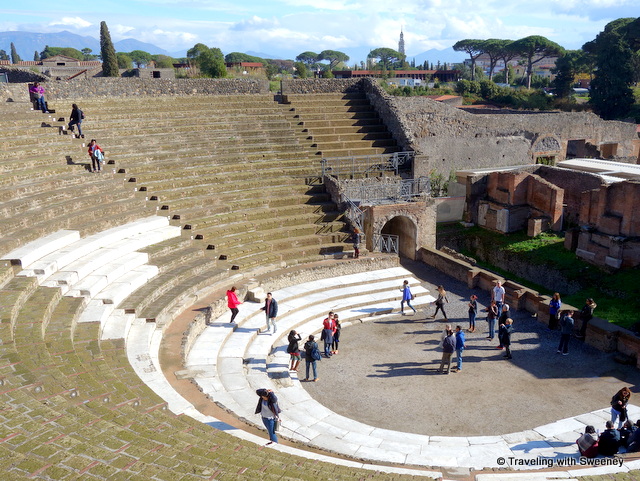 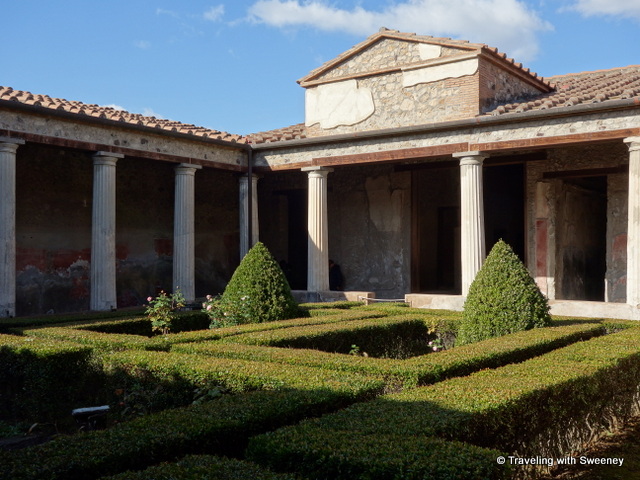 Garden courtyard of a Pompeii residence

Sweeney and I were both struck by one large wealthy family’s home which included courtyard gardens and colorful murals. 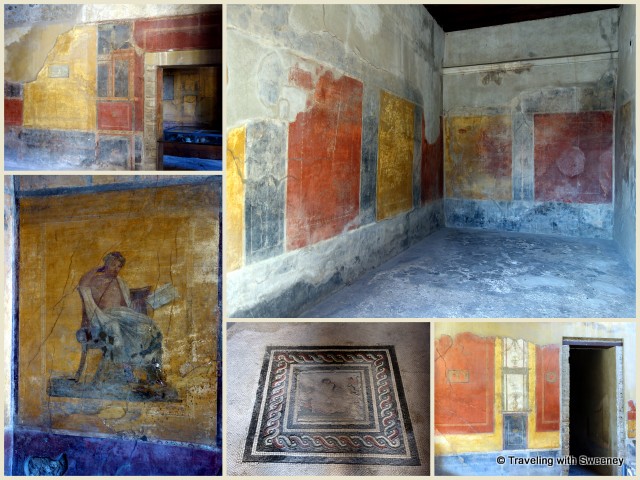 Another interesting aspect about Pompeii lifestyle was the row of brothels. In addition to graphic adornments on the front of each small chamber that identified the business, there were well-preserved murals depicting the services available to facilitate selection — particularly helpful because there were many different languages among clients and workers.

Graphic depictions of services rendered at the brothels

The forum was another impressive aspect of our tour. It was immense with numerous structures, aspects of life in Pompeii, and art. The aspects of the forum that remain enabled us to get a vision of what it might have looked like before the eruption. On the north side facing Vesuvius are remains (walls and columns) of the Temple of Jupiter, columns of the two-story arcades that flanked the west and east side, the Temple of Apollo, and the Basilica. 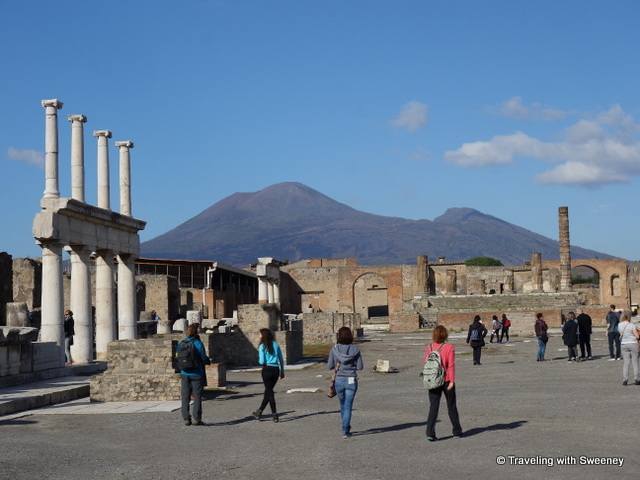 The forum of Pompeii

The baths were impressive for the level of restoration, its murals, and the impressive technology they used so long ago. 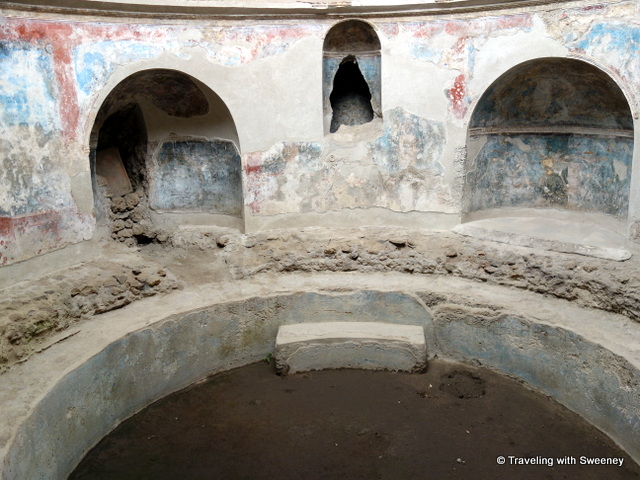 The frigidarium (cold bath room) of the Stabian Baths

The final part of the tour was emotionally moving. We were able to see displays of plaster casts that were formed by filling the cavities left by decomposition of the bodies of people (and animals) frozen in the volcanic ash. 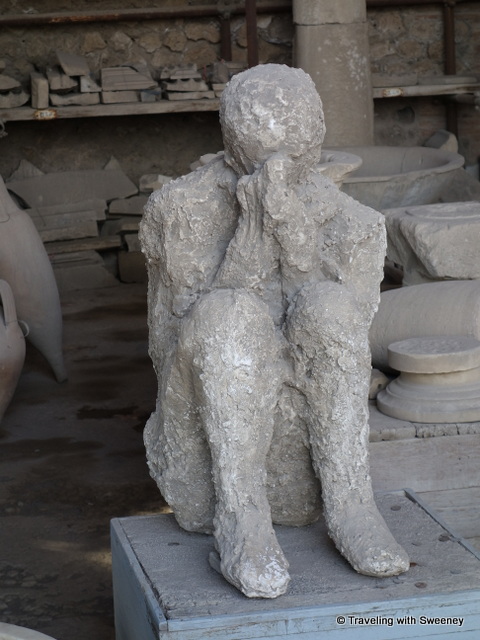 One of the plaster casts of a Pompeii victim

It really emphasized the speed with which the disaster struck though I was surprised to learn that it wasn’t as instantaneous as I had thought. Many in the city were actually able to escape.

I kept this recollection of the Pompeii tour quite high level and left out many sites and details. But hopefully, you can get a sense of what there is to see and you will get a chance to visit sometime to take a tour.

On the lighter side … 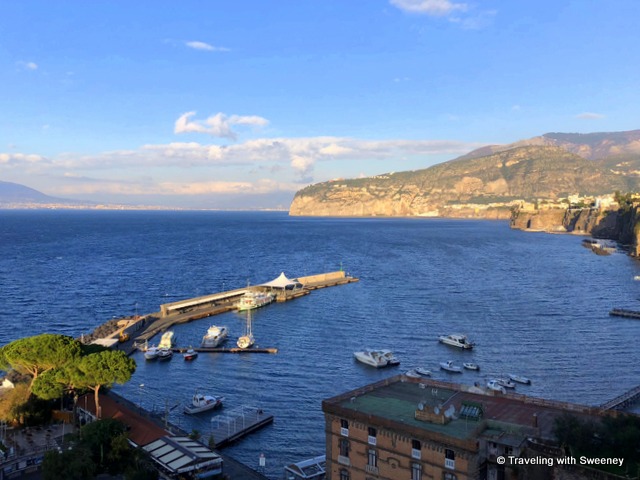 View of the Bay of Naples from Sorrento

After our immersion into the deep and intense history in Pompeii, a drive of less than an hour south along the coast on the Bay of Naples gave us a chance to enjoy the beauty of this area. During peak season, the tour includes a stop in the town of Positano on the Amalfi Coast. During the off-season (November to March) when we visited, most businesses there are closed, so the beautiful city of Sorrento on the Bay of Naples is on the itinerary instead. Although not on the Amalfi Coast itself, Sorrento is a great base location for those wanting to enjoy the Amalfi Coast drive and towns such as Positano. 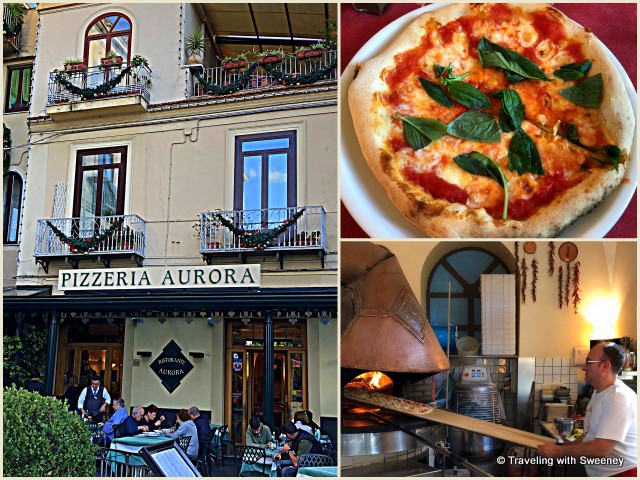 After a lunch of pizza (of course), we strolled the town high above the Bay of Naples taking in the panoramic views and cliffside buildings. 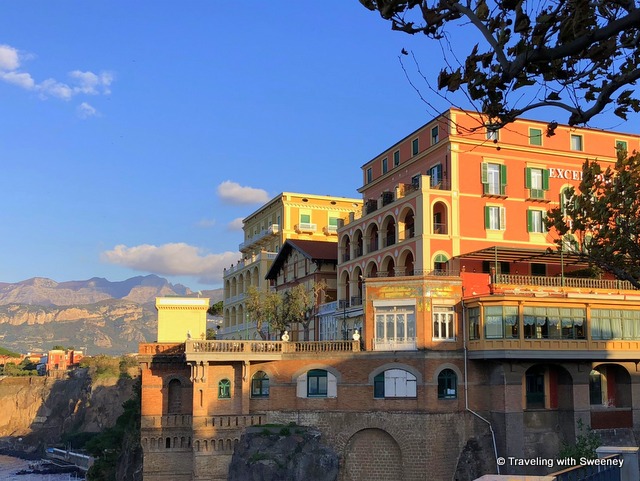 The narrow streets are lined with gift shops selling local specialties, especially all things lemon — from limoncello to ceramics painted with lemons. 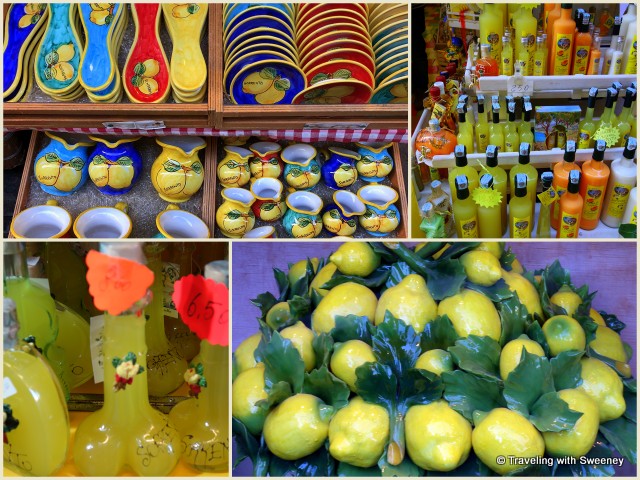 And then it was back to Rome where over the next few days we continued to be immersed in ancient history worthy of the fascination instilled by my former teacher.

Disclosure: Our Pompeii and Sorrento day trip from Rome was sponsored by Walks of Italy.