This is the first of Anita Finlay’s articles about her Mediterranean cruise.

Cruising the Mediterranean — The story begins in beautiful Barcelona!

Bleary eyed after a twenty-hour journey from Los Angeles, we retrieved our suitcases from Barcelona airport’s carousel and aimed ourselves at the nearest cash machine to stock up on euros. Armed with travel tips gleaned from Rick Steves’ Mediterranean Cruise Ports, my hubby, our friend, and I opted to haul our cruise wear onto a shuttle bus into the city, avoiding an expensive cab ride. We stood all the way and held on for dear life — not unlike bull riding in a bumper car.

Arriving at the famous Plaça de Catalunya early Sunday morning, we corralled our luggage, trying to figure out where the heck our hotel was. Like us, many other visitors were wheeling their bags through the streets. Unlike us, they seemed to know where they were going.

As usual, my husband and I fell into our vacation backwards. Eight months of anticipating a luxurious Mediterranean cruise did not involve any prep that was useful on our part – like learning conversational Spanish! Our friend, on the other hand, was a better and far more experienced traveler. But even with her colorful street map, we were confused. I thought I’d better pick up my slack so I told them to hang with the luggage while I foraged for our hotel without our large spinner suitcases in tow. Thinking my swell sense of direction couldn’t work in a strange country, I nonetheless headed in what seemed a logical direction, then made a less logical right turn. Two blocks and many questions of shop owners later, I found myself in front of the NH Calderón Hotel. 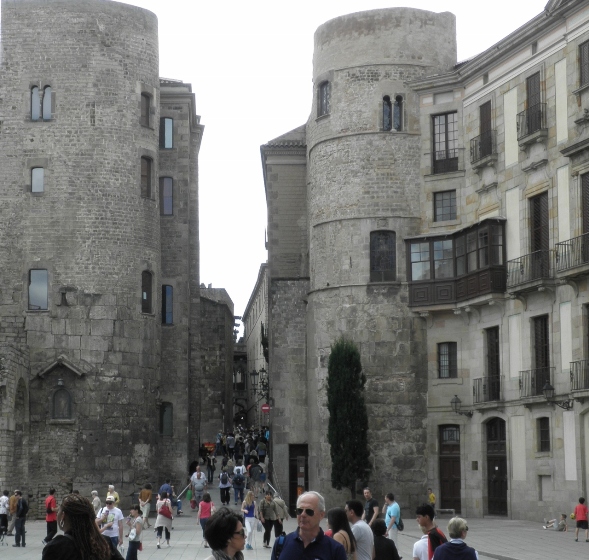 Victorious, I raced back, praying that when we went to ask after our rooms, the hotel clerk would take pity on weary travelers arriving six hours in advance of check-in and give us our keys anyway. She did. For a reasonable price, you got a smallish but modern, utilitarian room with a view and a fabulous breakfast. “But you cannot get the free breakfast today. Only tomorrow…with the room,” she said.

I laughed. “We’re not greedy.” We thanked her in English and used the catch-all (and one of our only Spanish words) — Hola!

I hated to admit that I first felt like a fish out of water. We couldn’t even figure out how to get the lights to work in our room. Desperate, I used my smartphone as a flashlight to find my way to the toilet. I then had to return to the lobby and bother the clerk to “turn on the electricity.” She looked at me like I was daffy. Then she told me to insert our key card into a wall slot by the light fixture to get the power to come on – a smart energy saving feature now commonplace in Europe, apparently.

Grousing all the way back to the hotel room, I felt like the accidental tourist, and a pissy one at that. We were not off to a great start. I forced myself to remember what we were there to do. Relax. Learn something new. Discover a people and culture we did not know. Stop expecting this to feel like home and make it home – at least for a little while.

Unfamiliar amenities notwithstanding, we were grateful to be allowed to park ourselves early and everything felt better after a hot shower. 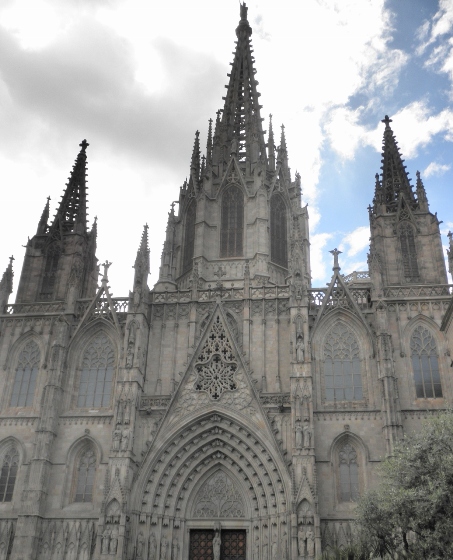 Freshly scrubbed, we met up with our pal and headed for Barcelona Cathedral to watch the noon time patriotic Sardana dances, where hundreds of locals formed circles in the large square, jumping and dancing almost in slow motion to live music in front of the stately church. We photographed the inside of the stunning cathedral and its majestic statues and sculptures, not to mention swans grooming themselves in the colonnade. 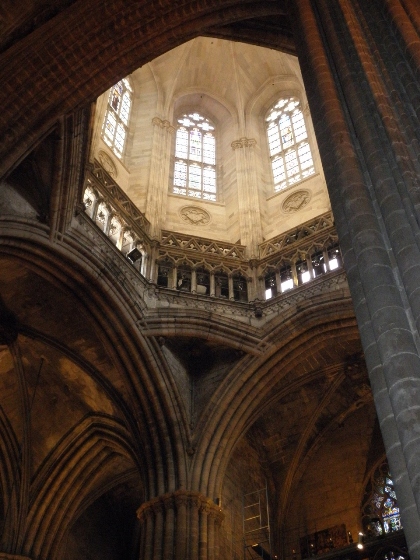 Then, making our way through romantic and picturesque side streets of Barcelona to La Plaça Reial in the Gothic Quarter of Barcelona, we had lunch at a place called La Crema Canela. Eat there. That’s all I can say.

We ordered tapas family style and picked at each other’s plates. I had pesto risotto (risotto cremoso de pesto con queso cheddar) garnished with sun dried tomatoes and white cheddar along with the house white wine. This was the most piquant and richest bowl of comfort food I have had in ages. We fought over the last bite.

The rest of the city was likewise sumptuous and charming with its winding, narrow streets and old world architecture. We wanted to make the most of our day and a half in Barcelona before boarding the Celebrity Equinox for our cruise but got caught in an afternoon rain shower and hurried up the Ramblas back to our hotel. Yes, we actually walked in the rain in Spain. 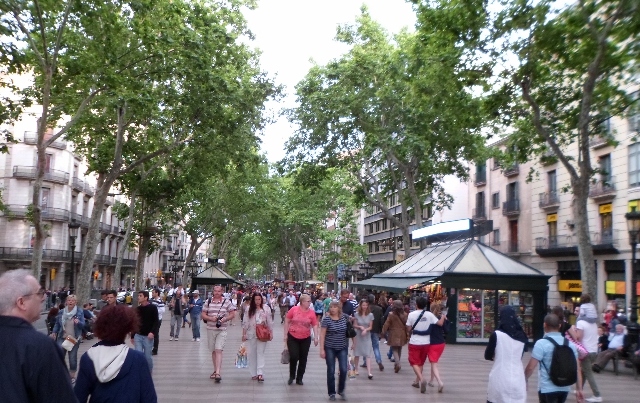 Walking down the tree-lined Ramblas

Napping away our jet lag, we didn’t head back out until almost 8 pm, where the sun was still bright in the sky. Bathing in “golden hour,” we went in search of another of Mr. Steves guidebook recommendations – a snack of churros in hot chocolate – cheap, decadent and not to be missed. After walking the Ramblas all the way to the Waterfront and back again, we took in the beautiful port and, along with throngs of tourists and locals, enjoyed the “human statues” that speckled our walk. Don Quixote was our favorite. His glowing cloth costume had his “horse” attached to him and when you graced his bucket with a coin, he and his steed would rear up suddenly, scaring all onlookers. He was quite the show.

When it was finally dark at 10 pm, we sat at a sidewalk café for some paella and sangria, chatting with the friendly staff and watching the world go by.

We made our way back to the La Plaça Reial, a gorgeous esplanade with high ceilinged apartments and French doors nestled atop restaurants and cafes that spilled out onto the plaza where only pedestrians were allowed. While my husband and our friend busied themselves with their cameras, taking pictures of every lovely angle of the place, I wandered around the quad, tearful and joyous. Breathing in the warm night air, I slowed down enough to realize I was halfway around the world and at the beginning of a fabulous adventure. The giant palm trees swaying in the plaza offered a touch of the familiar. It finally sunk in that we were on vacation.

By midnight we figured we’d better aim toward our hotel. The bed in our room was like sleeping on a soft brick, but my husband and I were so exhausted, we ignored it. 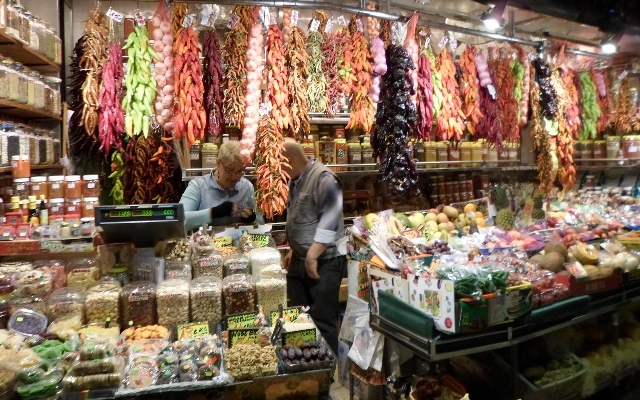 The next morning, after a generous breakfast at the hotel, we made our way to La Boqueria, an open air market where shop owners displayed fruit and local delicacies so artfully, we planned to make a calendar of the pictures we took of their colorful wares. 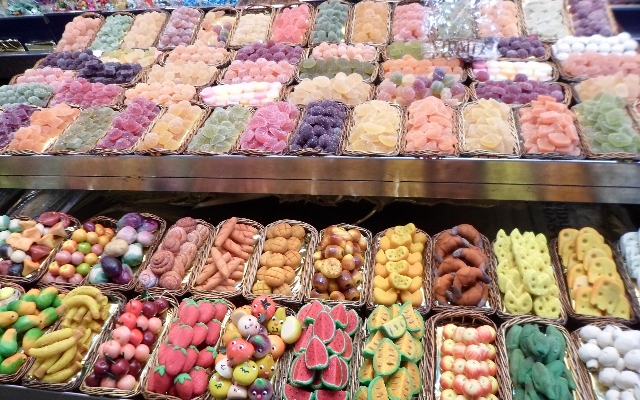 Their pride of presentation made every teacake a work of art. The first chocolatier we came to offered interesting goodies the likes of which we had never seen. We bought a few treats for the ship!

It sounds like all we did was eat. I can assure you we did not gain an ounce in Barcelona, or during the entire cruise for that matter. Every port we visited, there was not one hill we did not climb, no nook or cranny we did not investigate.

Late into the morning, we forced ourselves to leave the Ramblas and head back to our hotel. Checkout took all of three seconds. We stuffed ourselves and way too much baggage into the world’s tiniest taxicab. Picture twelve clowns getting out of the miniature car at the circus and you’ve got the idea. It was our only cab in a two week vacation. Our cabbie was a delight and no matter how limited his English, with a few well-chosen words, he was able to give us his views on a great many things, political and social. 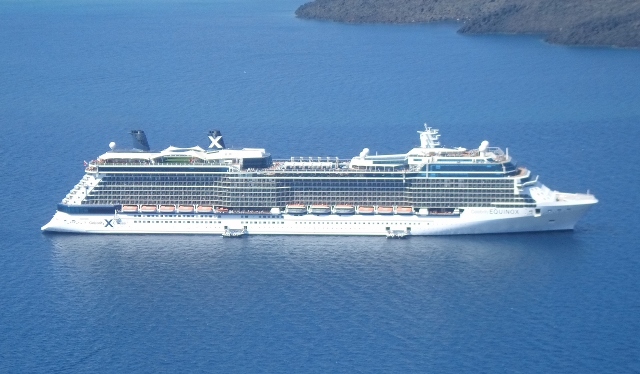 No sooner did he drop us in front of our ship than the staff of the Equinox whisked our luggage away. In less than 30 minutes, we were checked in and aboard, sitting in a beautiful atrium with champagne, toasting the journey to come. 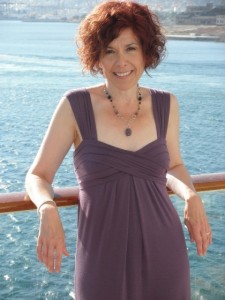 About the author:
Anita Finlay is the author of the Amazon bestseller Dirty Words on Clean Skin in which she shares the nasty truth of contemporary misogyny and tells it like it is for women aspiring to power. Anita is a frequent commentator to the top syndicated Jerry Doyle Show, ARNN, Epic Times and The New Agenda. She has also frequently been named editors’ pick on BlogHer.

Food and Culture on the Camino de Santiago
Note: This post may contain affiliate links. If you make a purchase through these links, I will earn a commission at no extra cost to you. Thanks!