For years, I’ve envisioned Milan with celebrities attending exclusive designer fashion shows, models posing in glamorous locations, and stylish residents dining in exclusive restaurants. The allure of Milan style has intrigued me and I’ve long wanted to visit. But until last month, Milan was still on my must-see list. 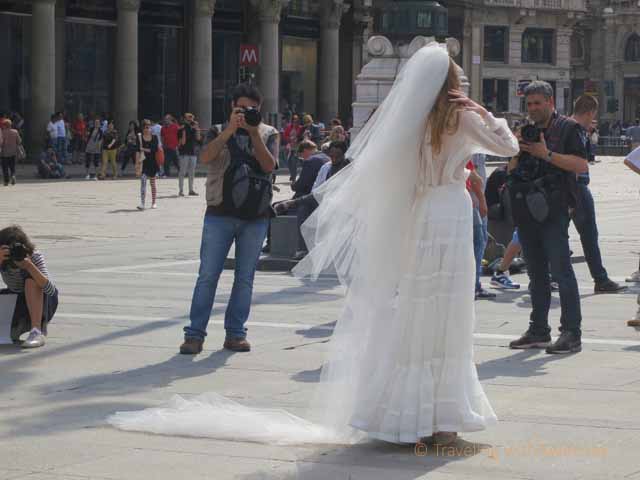 Before heading to the Emilia-Romagna and Puglia regions of Italy for blog projects, I had my chance to visit this cosmopolitan city, one of the fashion world’s capitals and the second largest city in Italy, known for history, culture, architecture and style. In person, I now got a glimpse of Milan style. The model in the wedding dress (shown above) caught our attention at the Piazza del Duomo. We also saw well-dressed Milanese of all ages appearing poised, ready for the limelight, but not ostentatious. Business people confidently rode bicycles and motorbikes through the streets wearing sharp suits and accessories. 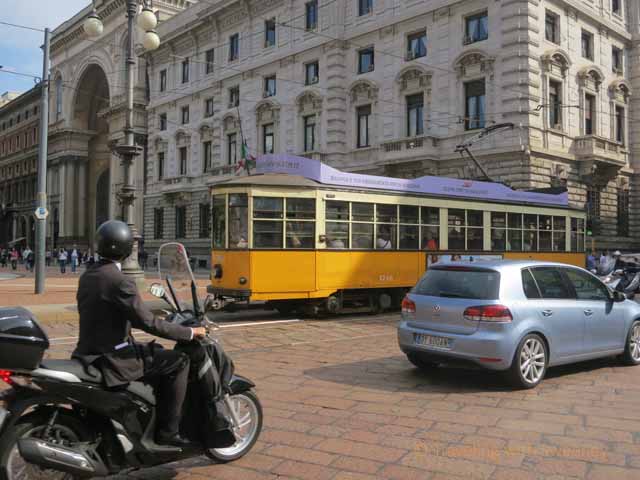 In style on a motorbike in Milan

Although I wasn’t mingling with the rich and famous during Fashion Week or sipping Prosecco at a villa at nearby Lake Como, I got a wonderful sampling of Milan style during my stay at the Four Seasons Hotel Milano.

The Four Seasons Hotel Milano exuded luxury and style matching my expectations. The hotel is a beautifully restored 15th century cloistered convent with 67 guest rooms and 51 suites. Portions of 18th century frescoes can still be seen in the lobby (center left in the photo below) and in some of the guest rooms. 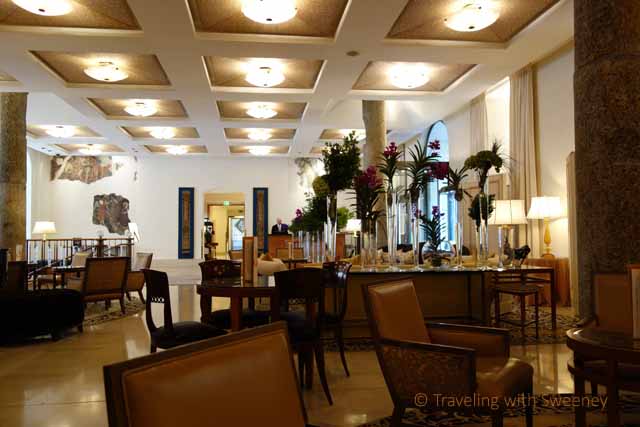 Perhaps my favorite design feature of the hotel is the oval spiral marble staircase that goes from the lower level to the 5th floor. 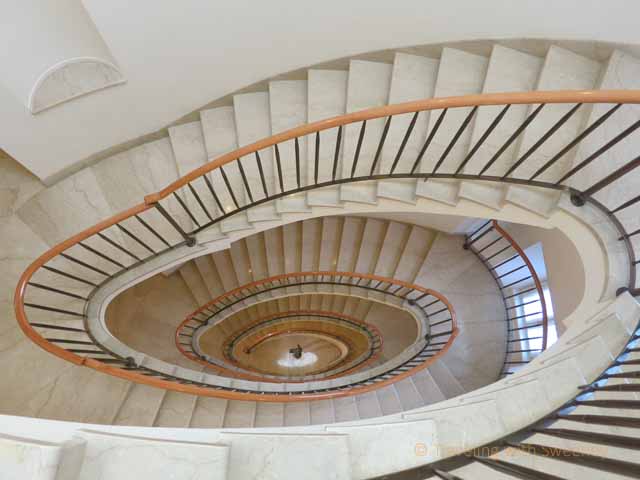 We had arrived earlier than expected, but the hotel made every effort to accommodate us. While waiting for our room, we enjoyed perfectly-prepared and presented lattes in Il Foyer, the lobby lounge. We had a lovely conversation with our server, Roberto, who represented the Four Seasons well with his pride in the hotel, enthusiasm for his work, and friendly demeanor. His friendly, helpful personality was consistent with other staff we met. 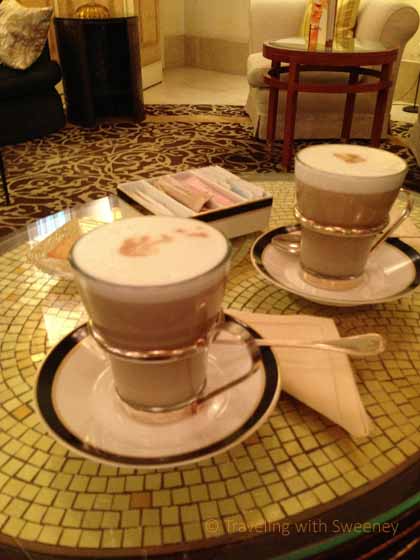 The Four Seasons is located in the heart of Quadrilatero della Moda, the premier fashion district mainly bounded by Via Montenapoleone, Via Manzoni, Via della Spiga and Corso Venezia. Many of the top designer shops are at most just a few minutes walk from the hotel. The world famous Teatro alla Scalla (La Scala), Galleria Vittorio Emanuele II, and Duomo di Milano (Milan Cathedral) are also in easy walking distance (about one half mile). 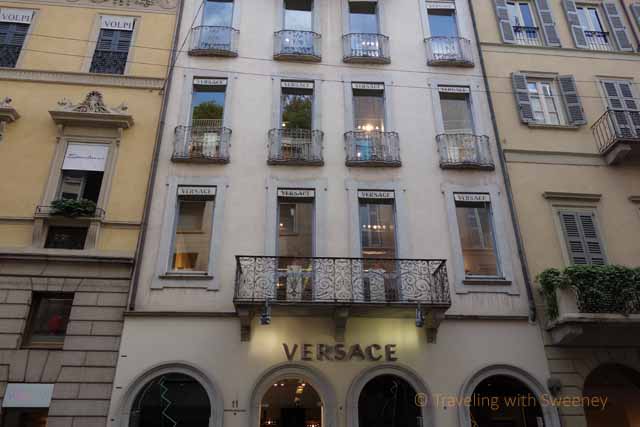 Versace on Via Montenapoleone

Alberta Ferretti on Via Montenapoleone 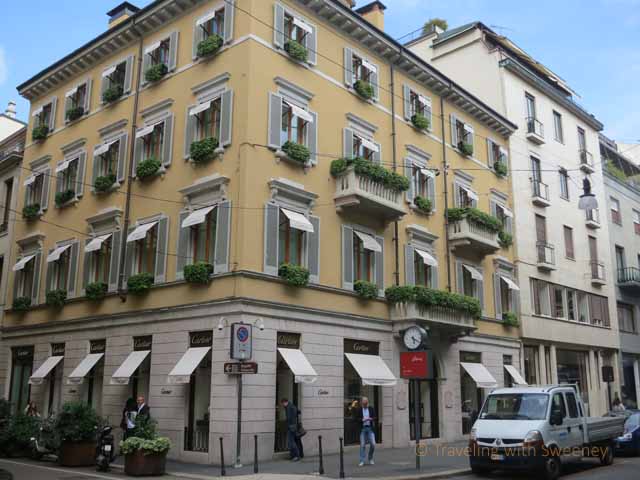 Cartier on Via Montenapoleone

Mr. TWS and I window-shopped the designer showrooms such as Armani, Prada, Alberta Ferretti, Dolce & Gabbana, Versace, and Tincati (an exclusive men’s boutique directly across Via Gesù from the hotel). I admired the shopping bags embossed with famous brand names in the hands of passersby. But we were traveling very light on this trip, so I didn’t give in to the many purchase temptations. 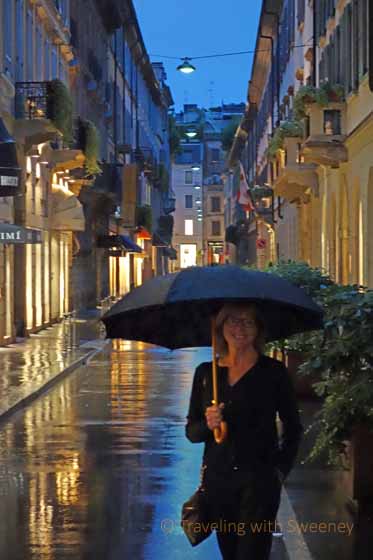 On Via Gesù by the Four Seasons in the rain

So convenient to the city center, Duomo and Galleria, the Four Seasons’ location made it easy to see it all — in fact, multiple times! We went back late one evening to enjoy a stroll in the warm rain, see the sites without the crowds and capture some night photos, which we’ll be posting soon (along with much more about Milan).

Our deluxe room looked out onto to a peaceful view of the courtyard (shown below). The view of courtyard garden, with birds chirping and church bells ringing in the distance, was an oasis amid a bustling large city. All the excitement of the city, as well as its historic attractions and extensive shopping and dining options were right at hand, but the ambiance inside was serene and elegant. 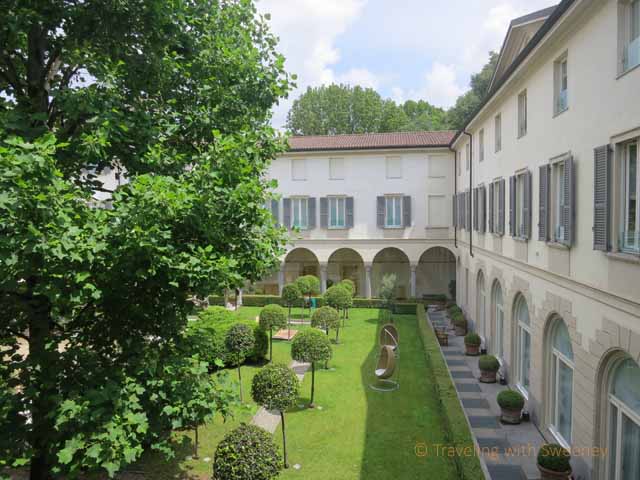 Lovely courtyard view from our room 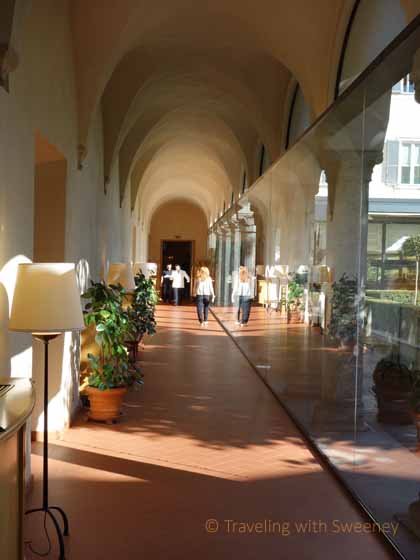 Glass-enclosed hallway looking out to the courtyard

After a day of walking miles around the city center, visiting the Galleria Vittorio Emanuele II (the world’s oldest shopping mall), walking throughout the Duomo and on its rooftop, exploring the nearby upscale residential neighborhoods, having a spritz at Terraza Aperol, and much more, it was a pleasure to come back to the luxury of the hotel and the comfort of our room. 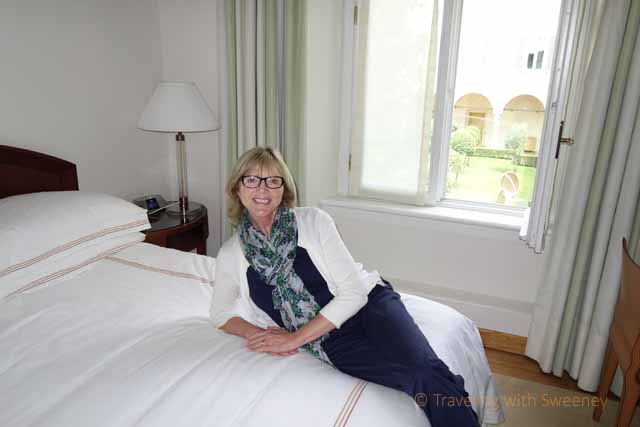 Enjoying the comfort and luxury

The two large windows opening onto the courtyard let in plenty of natural light and fresh air perfect for enjoying the fresh fruit and tasty chocolates that had been delivered to our room. The spacious room and furnishings were also conducive to getting some work done in this office away from home. 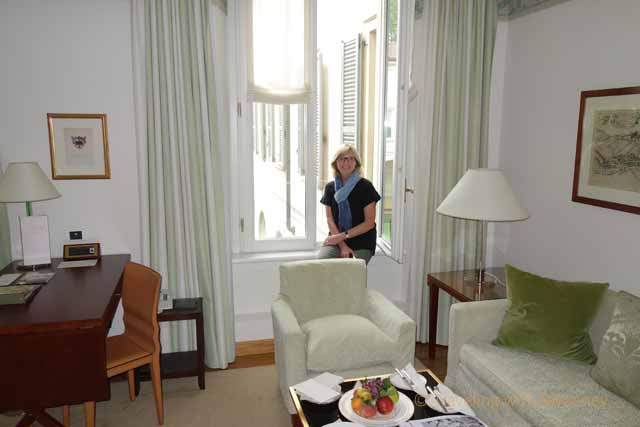 We twice enjoyed the full American Breakfast in La Veranda, a bright and unpretentious restaurant that looks out to the main courtyard. In keeping with the quality expected at a Four Seasons hotel, he buffet selections (pastries, meats, cheeses, fruit and more) and a wide selection of à la carte entrees including omelettes, pancakes, and Eggs Benedict were a great start to our days. 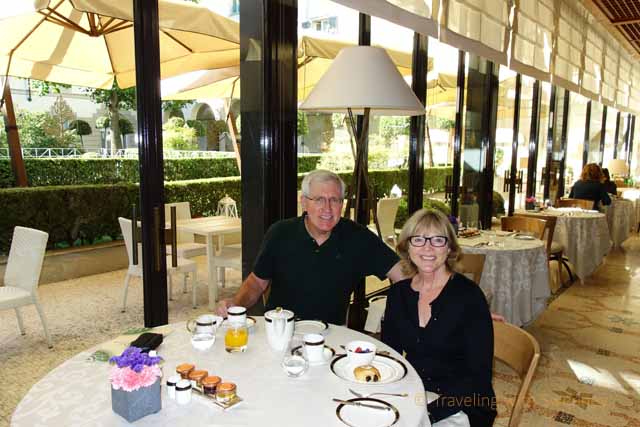 We admired the interesting and diverse art and decor, tastefully placed throughout the hotel and in keeping with Milan style. 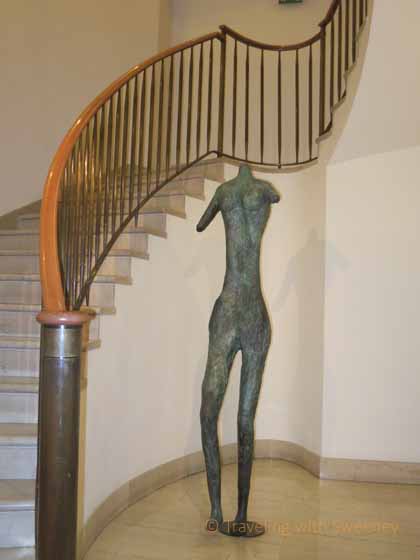 Fresh flowers enhance the ambiance throughout the hotel, including these in Il Foyer. 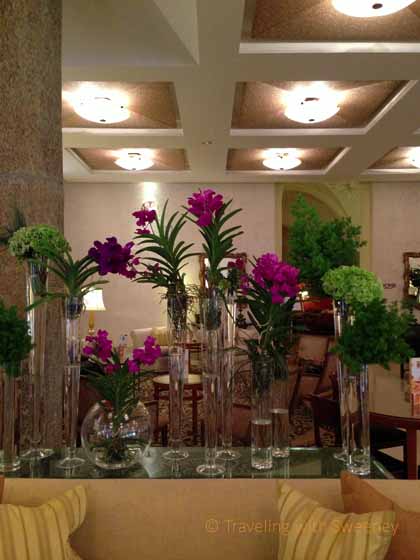 The lovely lobby of the Four Seasons Milan 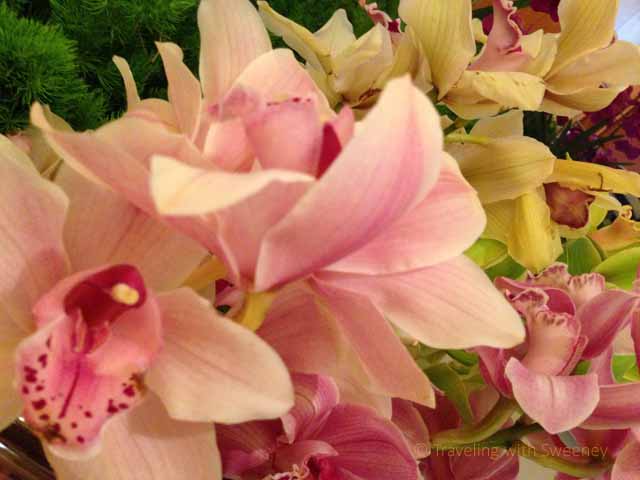 Floral displays at the Four Seasons

With only two nights to get acquainted with the city, our stay at the Four Seasons Milan was short, but very enjoyable. Our tour of the city let me experience a good touch of Milan style leaving me with a craving to bask in the glow of Milan again. I’ve told Mr. TWS that the next time we’re in Milan, I’d like to dress in Versace or Ferretti, attend an opera at La Scala, take a day trip to Lake Como, and stay at the Four Seasons again — just for a bit longer. 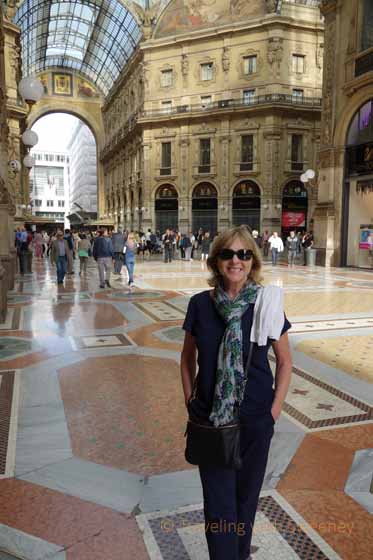 Disclosure: Our accommodations in Milan were hosted by the Four Seasons Hotel Milano, but the opinions about our experience are totally our own — as always.