I’d heard of truffle hunting before and understood the concept, but for whatever reason I always pictured the practical joke called “snipe hunting”. When we had a chance to try truffle hunting in a place where truffles are treasured and commonly hunted, I was excited by the opportunity. Our guide for the truffle hunt was Matteo Cameli of the family that had “adopted” us during our stay in Portico di Romagna. 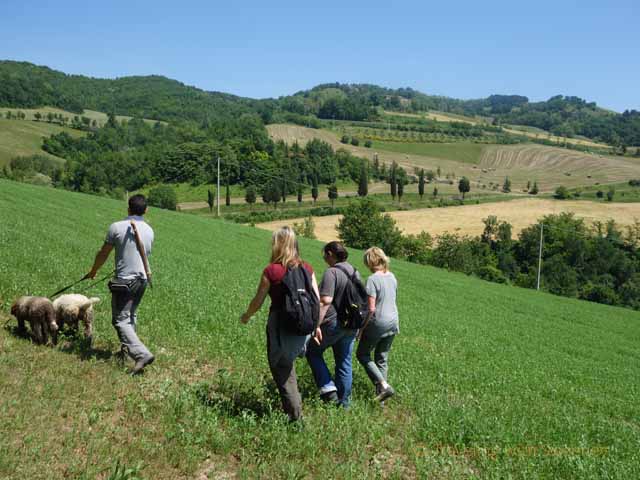 Like many of the activities we had there, we were able to see the beautiful Apennine hills and we were also able to get in some much needed exercise to slightly compensate for the delicious course-after-course meals at Al Vecchio Convento. Additionally, we were able to learn about these activities that were far less familiar to us. 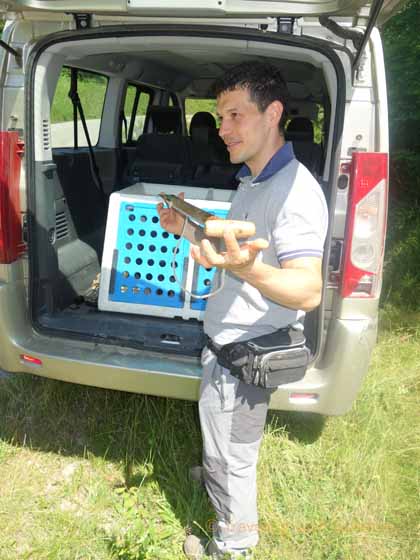 We arrived at the site of the hunt and Matteo patiently began introducing us to the activity, above showing the tool he would use to dig the truffles, if we found any. Then he introduced us to Otto and Rex, the stars of this show. They had been silent in their cages in the back of the van but now emerged frisky and ready to run. They are a special breed of Italian retriever, the Lagotto Romagnolo, that are bred and trained for truffle hunting and are the preferred breed of truffle hunters in this region. (Lagotto Romagnolo is Italian for “lake dog from Romagna”. All water retrievers are believed have been their descendents and they have been used for hunting for many centuries.) Rex has white fur white and is the oldest. Although Otto might be faster in finding some truffles, Matteo said that Rex was more reliable; if Rex appeared to locate a truffle, there was always a truffle there, while Otto had occasional false alarms. 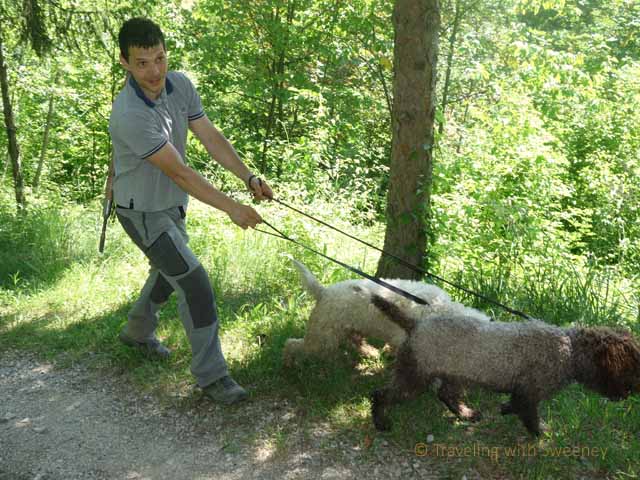 Matteo and his dogs, Otto and Rex

Rex is about four years old and Otto about three. They each have more than ten years of hunting left. This type of dog can be purchased young and untrained or they can be purchased when they are older and trained. The price varies as you would expect based on lineage, age and whether they were trained. Buying a trained dog provided the additional advantage of eliminating risk of whether the breeding held true and they were useful for truffle hunting. Though Matteo had never entered them in competition, he had been told that Otto would be sure to win based on his appearance. (There are competitions of two kinds, one for appearance as a typical dog show, one for their ability to hunt truffles.)

But back to our hunt.

We continued down a path through the woods as Matteo told us more about truffles.

Matteo and a group of fellow truffle hunters belong to a cooperative that has truffle hunting rights issued by the Italian government. Anyone else caught hunting there will be arrested. The area was chosen by the cooperative because it has conditions that are conducive for truffle growth. Trees of the right type are quite important. There is a unique symbiosis between the fungus (of which truffles are the fruit) and the tree. In addition to the correct initial conditions, the cooperative had cleared sections of the land as shown below to make the conditions even more ideal for truffle growth. 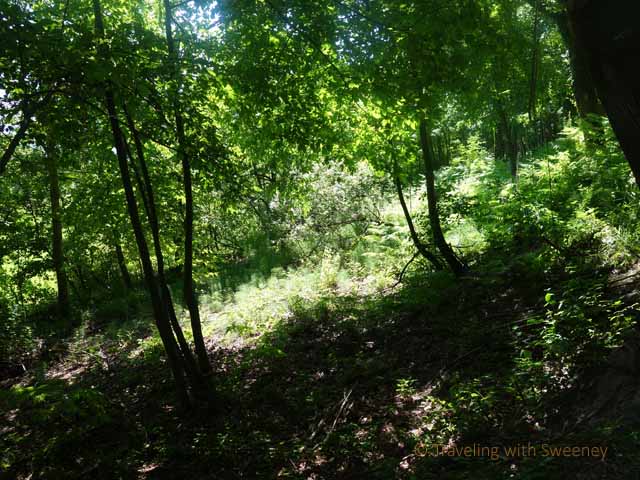 Into the woods – a cleard area for better truffle-hunting

Matteo also set our expectation. He said it would be fortunate if we found one truffle. Others in our group of 4 bloggers felt we would find none, I felt a weak hope for 2 but Sweeney, ever positive, felt highly confident about finding five truffles. Then it was time for the hunt to begin. Matteo got set to release Otto and Rex…

… and they were eager to get at it. As soon as the leashes were off, they bolted into the forest with a purpose. 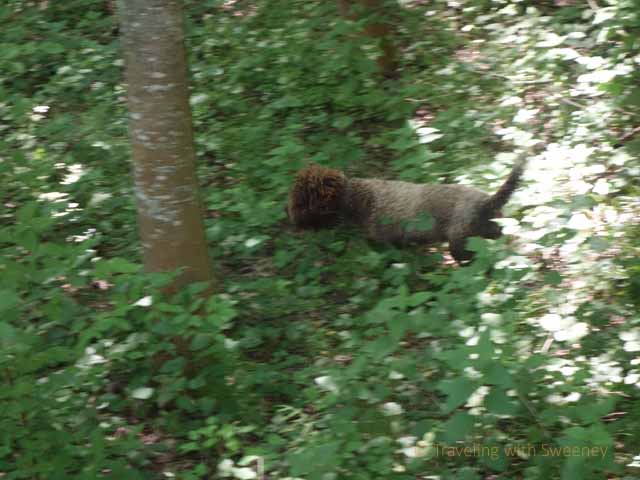 Matteo whistled subtle commands when Otto was distracted. He kept them from going to the area much more likely to have white truffles, which would not be in season until October. We were seeking the in-season black truffles today. (By season was meant not a government mandated time, like deer hunting in the U.S., but the time when edible truffles would be found}.

All of a sudden, Matteo sprinted toward Otto. He was digging for a truffle. Matteo quickly knelt by his side, checked for pay dirt and rewarded Otto with a treat. Then, holding Otto at bay, Matteo got ready to investigate. (The dogs like to eat truffles too, though not nearly as much as pigs. I had previously thought that pigs were usually used for truffle hunting, but that’s not correct primarily because pigs are more likely to eat the truffles than dogs.)

The video below shows what happened next.

Matteo used his digging hoe to carefully dig around the truffle and extract it. Then he handed it to Sweeney who sniffed, observed and passed it to the others. Everyone was surprised. The look and scent weren’t quite what we expected. It smelled subtly of garlic.

Within a minute, Matteo looked up and this time really bolted in pursuit of Otto. We hesitated, and then scrambled in hot pursuit. When we arrived, Matteo was already holding a second truffle. Apparently, this one was much closer to the surface. Both of the truffles that had been found were good size. Matteo continued to educate as he talked about the sizes and prices. They’re more expensive per gram when larger and the white are considerably more expensive than the black ones.

We were all excited, vicariously taking part in the success.

With their work done, Rex and Otto were free to romp in the beautiful setting.

Ah, but the proof of the pudding is in the eating. I have had truffle sauces but don’t think I’ve ever had fresh truffles alone on anything. I was curious what it would be like. For breakfast in the restaurant the following morning we had scrambled eggs on which Matteo had grated one of “our” truffles. 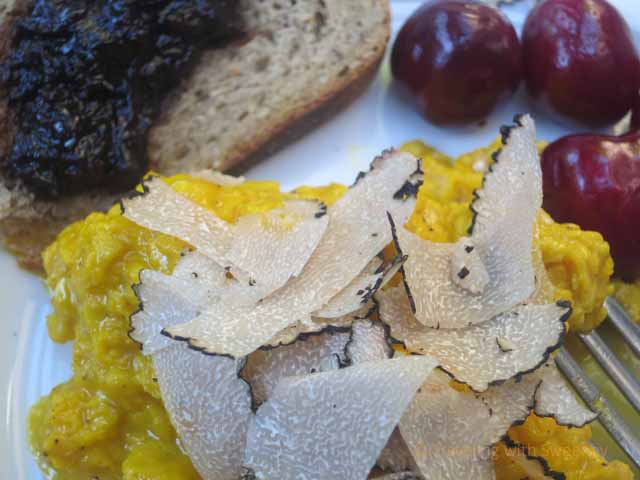 This is our contribution to Travel Photo Thursday at Budget Travelers Sandbox.

Our thanks to the Associazione Nazionale Alberghi Diffusi for making our Emilia-Romagna experience possible.

48 thoughts on “Truffle Hunting in Emilia-Romagna”