The taxi barrelled out of Suva and the city lights faded behind us. And there I was, seated next to Niteshni, my new best friend of 15 minutes, headed for her uncle’s going away party. I wasn’t sure whether he was a UN peace-keeper or a mercenary, but either way he was shipping out in three days. Further, I had no idea where we were headed or who would be there when we arrived. No, my mother didn’t know where I was and neither did anyone else in the world. I was living in New Zealand and had gone to Fiji for a working-holiday.

On a meander around in the early evening, I’d strolled into a bar, always a great place for a solo traveller to meet people. Once there I’d casually mentioned to the young woman I’d just met that I wanted to try Fiji kava while I was in the country. She squealed with delight, grabbed my hand and piloted me into a taxi.

Ah yes, there was no choice but to go with the moment. After miles of bad road we arrived at our destination village. We stepped precariously and we approached a house. Niteshni flung the door open and the women seated on the floor looked up at us.

The food – dalo (starchy carbo), miti (coconut cream with onions and chillies), palusami (corned beef mixed with garlic and onions and wrapped in taro leaves) and fish in coconut milk – was spread out on a plastic cloth and no cutlery was required. The aunties invited us to help devour the remains of the feast. The men, of course, had already eaten. Then Niteshni stood up and announced we were going to the kava house. We made our way to the house next door without streetlights or a flashlight. She opened the door slowly, almost on tiptoes, and we walked in.

The entire room was circled with men in various states of dress and undress, remember Fiji is in the tropics. In the centre of the room sat the kava-brew master with his wooden urn, a striking stick, and a coconut shell.

Fortunately the ritual started to his left and went clock-wise. So by the time the communal coconut shell got to me I knew I had to clap once, hold the shell with both hands, skull the contents, pass it back to the brew master and clap three times. Kava tastes rather like horrible earthy-type herbs mixed in warm water. Apparently nobody — even the regular drinkers — actually enjoy the taste.

While I knew that kava wasn’t hallucinogenic, I wasn’t sure what the effect would be. So I sat there and waited. Nothing much, but then my tongue started to feel thick. “You mean that’s it?” I asked. “No,” Niteshni replied, “if you drink enough you start to feel relaxed and maybe a bit sleepy.” But why would you want to bother if it doesn’t have more of a kick to it and tastes so bad, I wondered?

As I settled into the ambiance of the evening I noticed that the men sort of mixed and mingled – or didn’t. Some just sat there and read newspapers until it was time to down the next shell of kava. From time to time a woman would wander in, but she would not sit down or stay long.

I chatted with various men and spoke at length with the guest of honor. The uncle was, indeed, a UN peace-keep headed out for a stint. He invited me to return the following evening for the final night of the party. About midnight I said my goodbyes, was escorted to the road and caught a taxi back to Suva.

When I returned the following evening the greetings were totally different. The first night I was treated as a foreign visitor bordering on a dignitary; the second night I was welcomed as a family friend.

As I see it, if I hadn’t been on my own, chances are I would have had to go to a tourist tasting to try kava, rather than mixing with the locals. How perfectly dull. 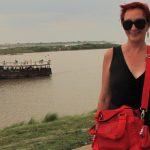 Jody Hanson is an insufferable travel junkie who currently lives in Cambodia. To date she has visited 107 countries, lived in eight and holds passports in three. Her – some would say irresponsible – retirement plan is to keep going until she drops. At that time she wants a Muslim burial: wash the body, wrap it in a white sheet and plant it by sundown. In the meantime, Hanson continues to have more than her share of adventures and misadventures, both of which she embraces equally.

2 thoughts on “My Fiji Kava Caper”