What a day for a Maui road trip through diverse terrain with scenic views and surprises. 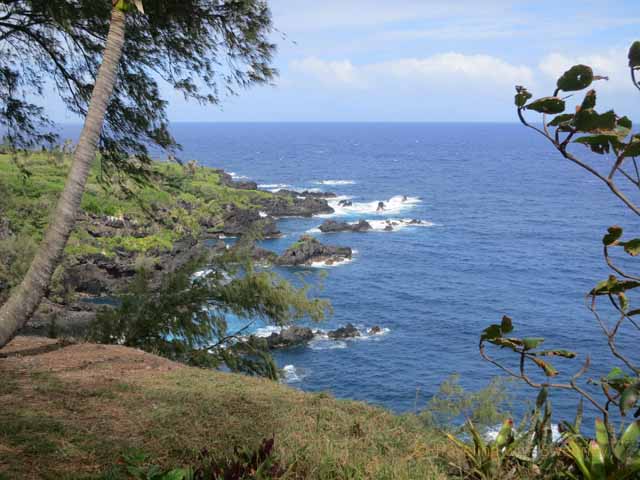 During our last morning in Hana at Travaasa Hana we took a horseback ride along the coast and got a great tip from our guide, Jolynn Piimauna — to take the road along the backside of Haleakala instead of backtracking on the Road to Hana. Mai Tais, swims in the pool, walks on the beach and dining on Hawaiian natural cuisine have cut into some of our blogging time. So, although our day was full of sights and activities, in this post I’ll share just a few of the sights and an amusing anecdote from the drive from Hana in East Maui to Napili on the northwest shore of West Maui. 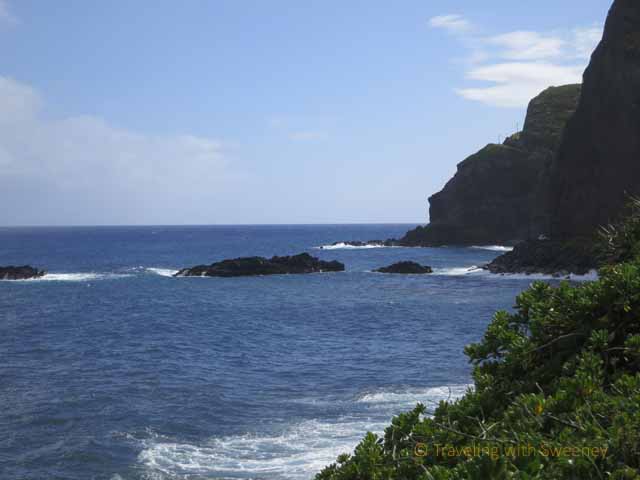 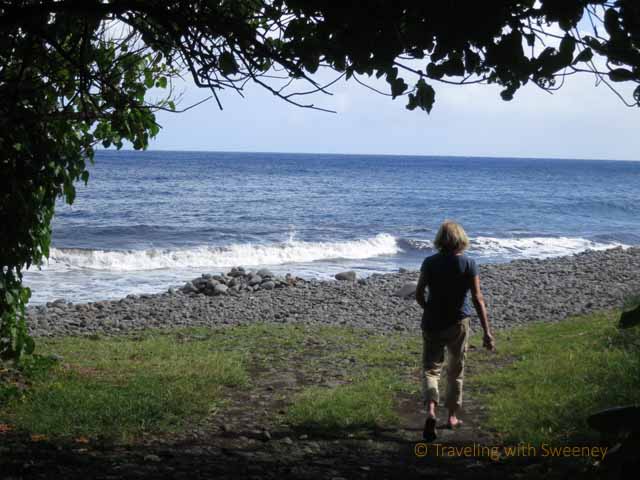 Sweeney on a rocky beach

The northern route to Hana is a great drive but a lot has to do with the stops and hikes; on the Haleakala backside route, there were beautiful vistas and mountain views along the whole drive.

We’d read a lot about the roughness of this route but it seemed from things we’d read online this was a thing of the past with recent paving. The road was a bit rougher in spots but also wider and smoother, particularly where recently paved. We’d read ( I thought jokingly) that the dangers included possibly running into cows, so I was surprised and amused to find a stray calf wandering in the middle of the road. Sweeney was driving and stopped abruptly, though we were probably going 15 mph at the time. 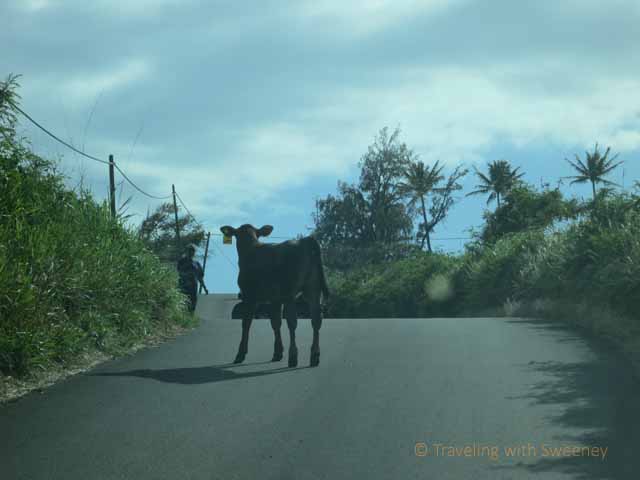 She inched forward to get past the calf without spooking it, but as she got closer, the calf kept moving ahead. As we moved forward, we saw a Hawaiian cowboy (paniolo) with an ATV. We’d learned just that morning from Jolynn that cows were no longer herded by horseback riders but rather ATV drivers.

Who knew there was a running of the bulls in Hawaii? We caught it at close range.

We assumed the paniolo had heard of the wayward calf and was in pursuit; however, passing the calf, we found that the paniolo was blocking the road with his ATV and looking up the road (away from the calf). We stopped the car and waited, expecting for help to show up so that he could let us pass; however, the time dragged on. 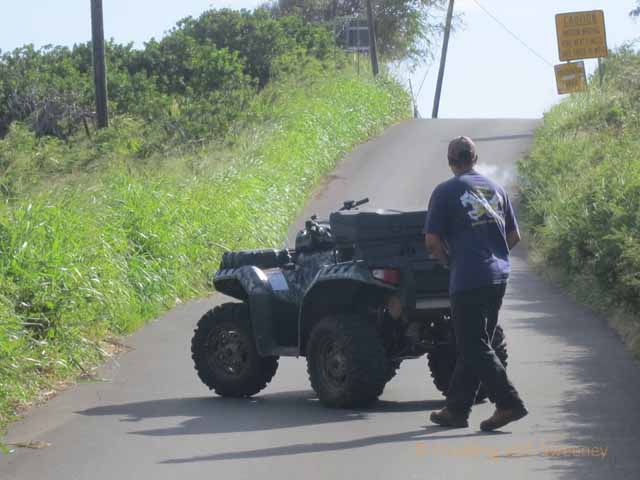 Rancher and his ATV

As the cars gathered behind us, people parked and I got out to shoot some pictures. Then Sweeney suggested I go ask what was happening. I approached the cowboy and he said that he was stopping traffic because they were bringing the bulls down the road for mating. We chatted for a bit and I started back to rejoin Sweeney. She began screaming for me to get in the car and pointed up the hill. I whipped around and saw bulls stampeding over the hill. That may seem an overstatement but it is exactly what it looked like; the running of the bulls headed right at me.

I ran back toward the ATV, I guess, to get a closer picture. (Isn’t that what zooms are about?). Perhaps it was to share the minimum cover the ATV provided. The stampede seemed to stop itself; the bulls knew where the gate was and they seemed excited to get inside. I didn’t get a photo or video of the stampede, but this short video shows the aftermath (not our voices in the background, by the way).

While I was up talking to the cowboy, several people approached Sweeney (in the driver’s seat of the lead car) and asked her what was going on. One woman asked: “Well, what’s going on?”, as though Sweeney was in charge of the delay and the woman wanted to know why. Then even more amusingly, an impatient young man approached the “person in charge” (Sweeney) and said agitatedly: “So how long is this going to take?” Of course, Sweeney replied: “I don’t know.” He retreated muttering to himself. I’d love to have heard how each of them relayed the message to their travel companions. 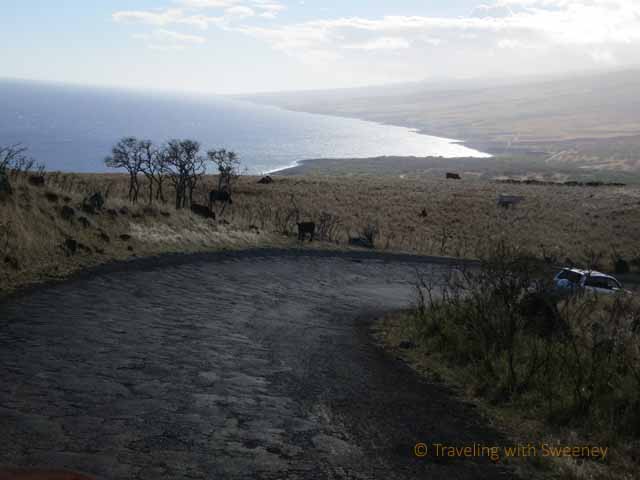 Beautiful scenery along the way 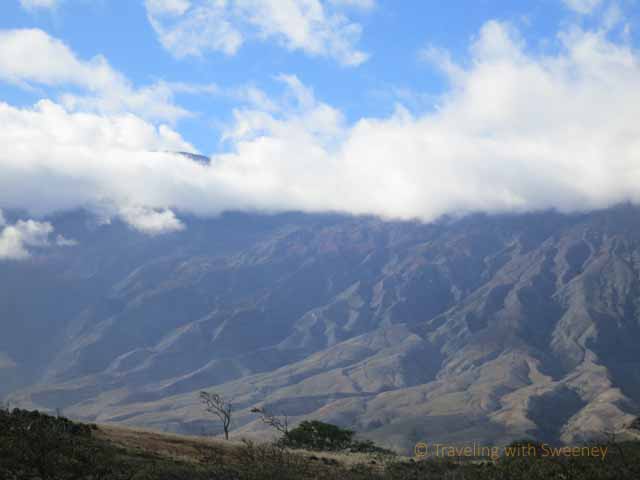 Stay tuned — there will be much more about our Maui exploration in upcoming posts, including the horse ride and the rest of the drive to Napili.

52 thoughts on “Maui Road Trip: Running of the Bulls”