Merry Christmas 2016 from the TWS duo 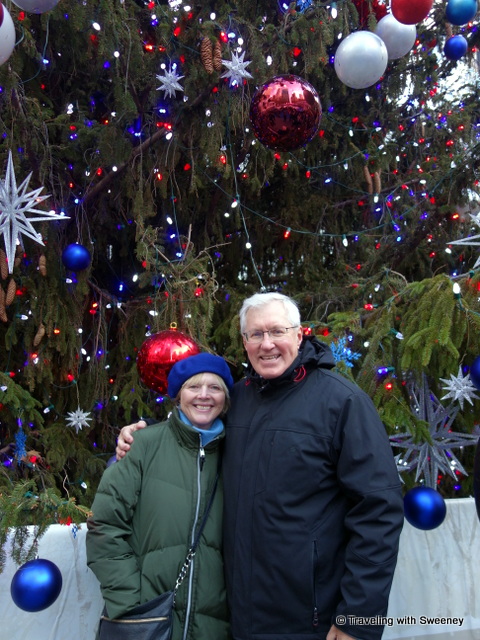 Sweeney and Mr. TWS in front of the Christmas tree at Bryant Park

Sweeney and I kicked off our Christmas season a little differently this year because our relocation to Scottsdale, Arizona from the San Francisco Bay Area was still in progress. Instead of getting our Christmas tree and decorating just after Thanksgiving before heading off to Europe for a holiday trip in early December, it seemed getting to New York City for a few days was the perfect plan. We had commented several times recently that it had been too long since we had been to New York and the visit relieved our itch for seeing the city again but also got us in the Christmas spirit. So this brief sharing of our few days there is also our Merry Christmas greeting to you all. 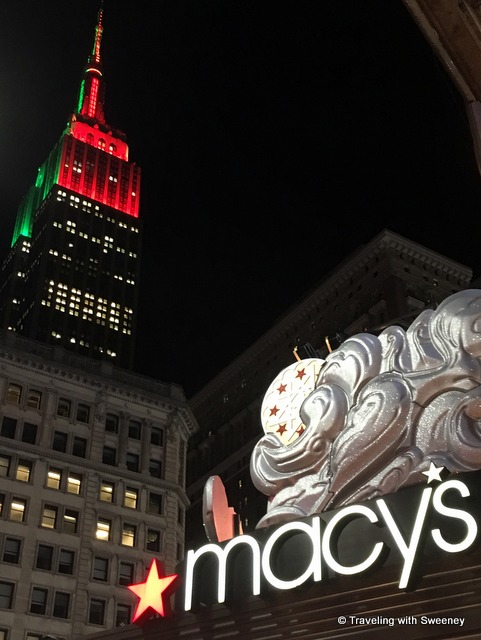 For me, the Empire State Building epitomizes New York at Christmastime, particularly with its red and green lights (though the colors schemes varied while we were there). The iconic New York site was in view just outside our Murray Hill hotel. On 34th street between 3rd Avenue and Lexington Avenue, the hotel was a great central location for experiencing Christmastime in New York City.

We arrived at the hotel just after dark and after checking in walked a few blocks to another icon of New York City at Christmas — Macy’s. If its Christmas window displays, eagerly-anticipated by most New Yorkers and visitors, aren’t enough to warrant that distinction, its particular prominence as a setting in Miracle on 34th Street, one of the all-time Christmas movie favorites surely does. The displays, a few pictured below, were impressive but not quite as Christmas-y as ones we’d seen before. It was a good start to our visit as was the walk in the brisk air, which seemed especially cold to us as temperatures in Arizona had been in the 80s and 90s (F) during October and much of November. 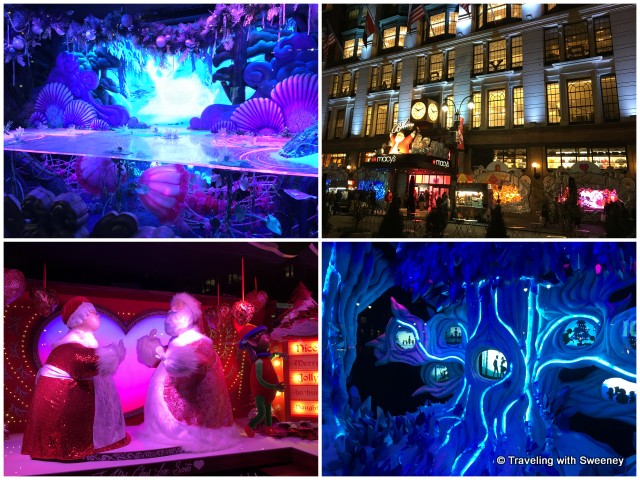 The next morning, we began the day with brunch at Penelope on Lexington Avenue, a popular nearby restaurant with delicious breakfast comfort food. It was well worth the wait of just under an hour.

From there we headed to nearby Madison Square Park to see a real life-sized gingerbread house (this time we didn’t wait in the line — about a block and a half long — to see what was inside.) While there, we also enjoyed the other festive decorations and appreciated the sheer beauty of the park and surrounding skyscrapers. 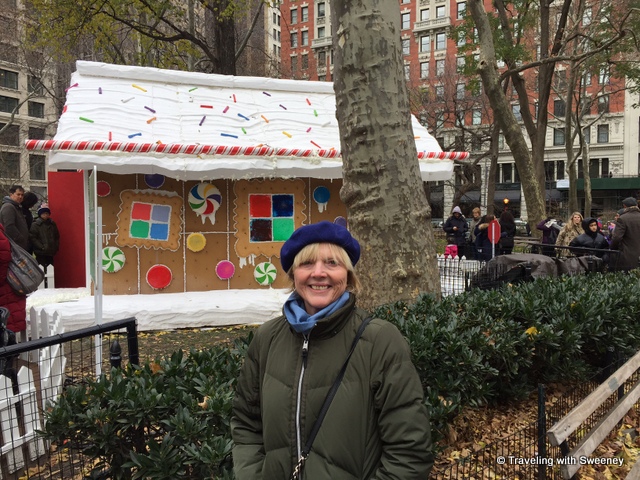 It was across the street from the park near the landmark Flatiron Building that we got our first glimpse of revelers dressed in Santa gear gathering for SantaCon, the annual pub crawl with frivolity and imbibing continuing from morning to late night. At about noon, we were amazed to see the line for 230 Fifth, a rooftop bar on 5th Avenue. The line stretched at least a block and a half (we couldn’t see around the next corner to see how long but guessed another block) with Santas. 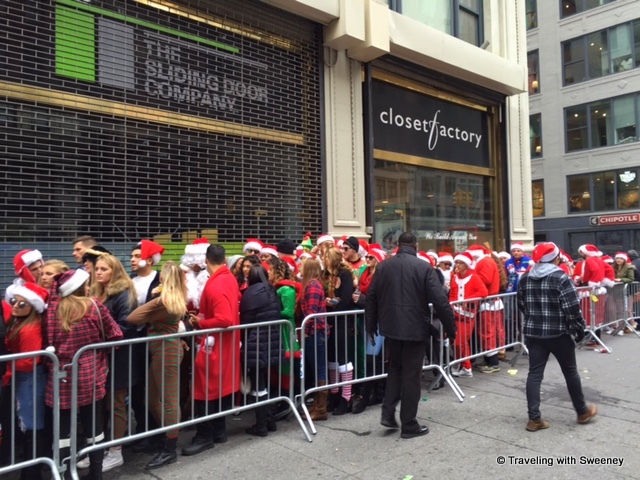 Ho Ho Ho! It’s SantaCon! Revelers line up to get into the 230 Fifth rooftop bar

Throughout the day we encountered clusters of the party-seeking Santas as we walked around the city. We learned that many locals aren’t particularly fond of SantaCon, but we didn’t personally witness any of the predictable downsides of a day-long drinking event. 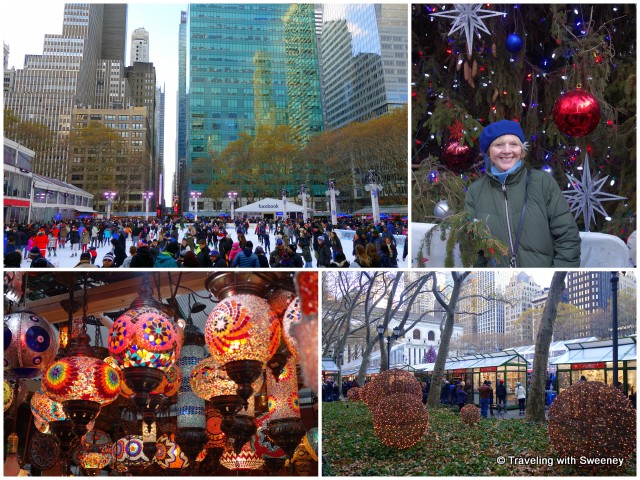 Heading north to Bryant Park, one of our favorite places in New York, we enjoyed the walk, Christmas scenes along the way, and energy of city. Bryant Park has a great skating rink and a Christmas market in a wonderful setting next to the New York Public Library surrounded by fabulous architecture. 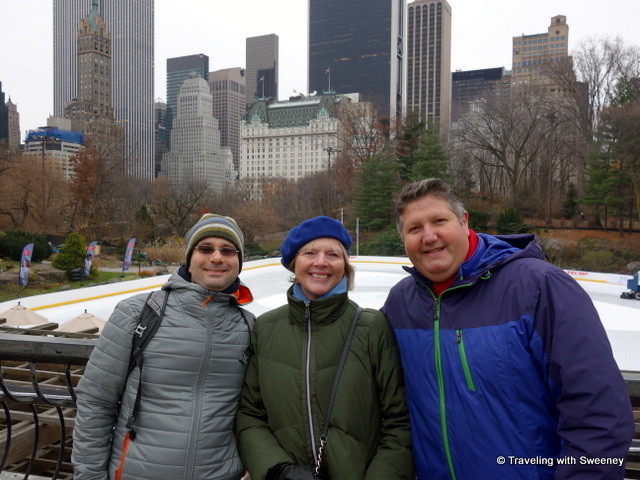 On our second morning, we headed back to one of our old haunts for breakfast (it was one of our favorite breakfast spots just blocks from where we had an extended stay in Midtown East several years ago. After a hearty breakfast that was just like those we remembered, we met two blogger friends, Aaron Heflich Shapiro and Jeff Dobbins with whom we enjoyed a nice walk in Central Park. Our friends pointed out spots we’d never noticed before in the park, like the plaques in the sidewalk that commemorate donors who adopted trees in Central Park. In particular, we came across one that was dedicated to Natasha Richardson, the late actress who we’ve always admired.

Wine, cheese, and lively conversation at a cozy Upper West Side cafe topped off a great New York City afternoon. 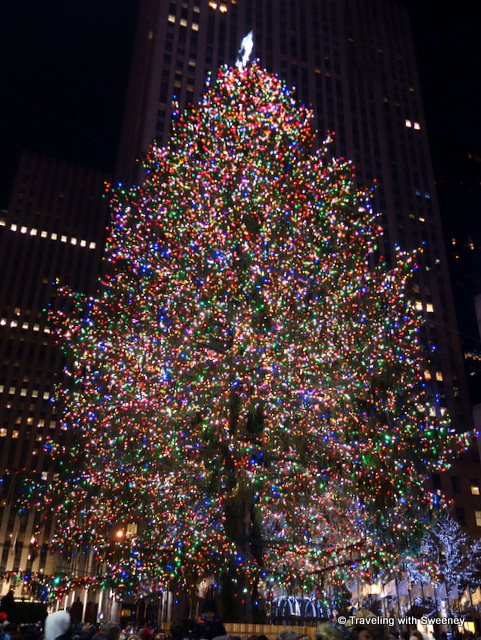 From there we headed to another iconic NYC area, one especially associated with Christmas — Rockefeller Center with its enormous Christmas tree and inviting skating rink. The lights of Radio City Music Hall were dazzling as well. 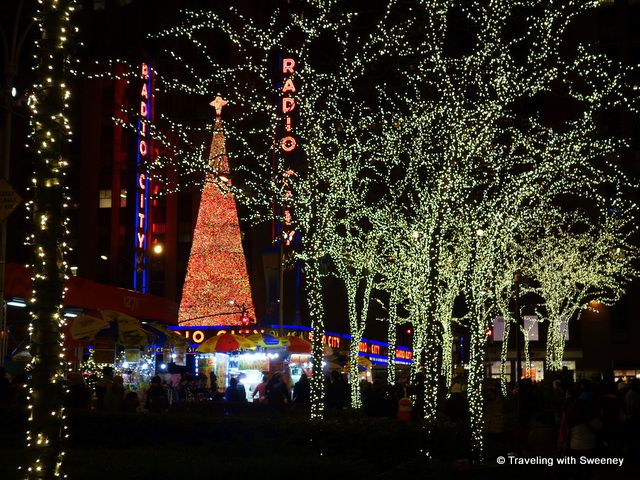 Also along Fifth Avenue, many extravagantly decorated hotels and department stores drew huge crowds. The light show on the facade of Saks Fifth Avenue accompanied by Trans-Siberian Orchestra’s Carol of the Bells was mesmerizing. Don’t miss the performance and displays at Saks Fifth Avenue at Christmastime. 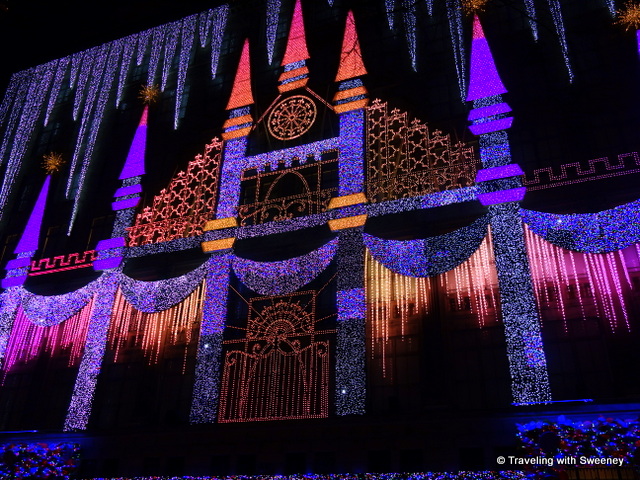 Wending our way back to our hotel at the end of a full day, we appreciated the beauty of the gorgeous red Christmas ball decorations at the pool on Sixth Avenue and the giant Christmas lights decoration a block south. 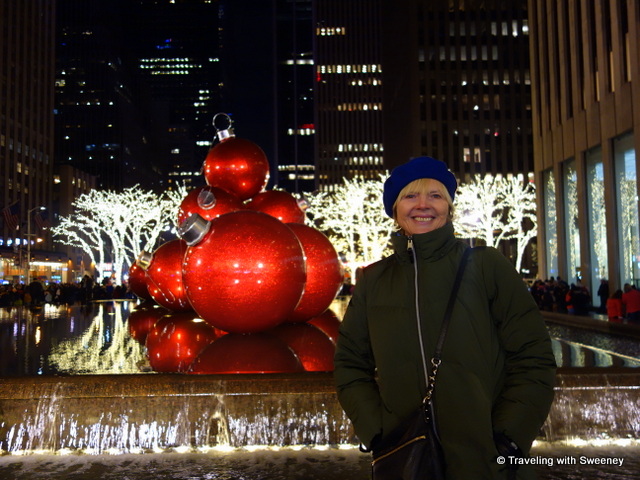 It all added to the magic of the day and the trip. 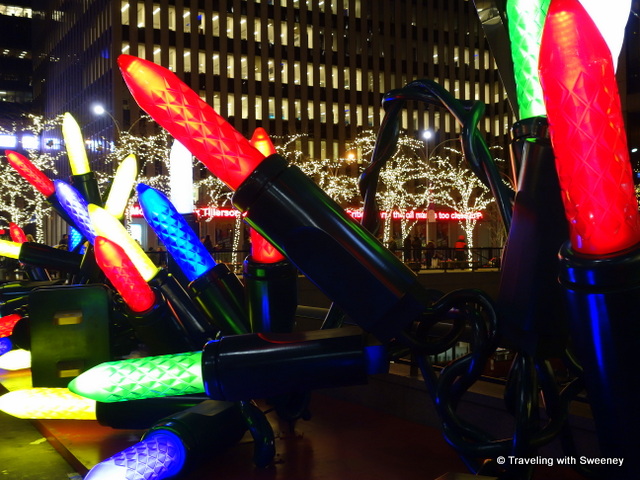 We enjoyed many other New York sights, but I hope these few highlights of kicking off the holidays in New York capture a bit of our enjoyment.

Merry Christmas to you all and our best wishes for a year filled with peace, health, happiness, laughter, and travel!

2 thoughts on “Our Christmas Card from New York City”