Cultural Traditions at the Native Trails Festival in Scottsdale

I remember butterflies. A snake coiled up in the desert. Birds surround you.

The simple words of Derrick Suwaima Davis of the Hopi and Choctaw Nations describe inspirations from his youth that were his calling to dance. Today, he is the artistic director of the annual Native Trails festival in Scottsdale, and he is also the only adult seven-time World Champion Hoop Dancer. Each year, he and the other festival performers bring their talents and cultural expressions to the festival, sharing their passion and pride in their movements and voices with people of all cultures. This year’s festival focuses on the concept of unity among people of diverse cultures — dispelling stereotypes, finding commonalities, and encouraging cooperation. 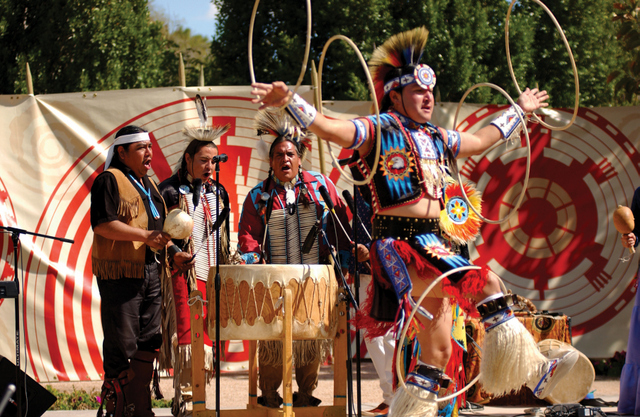 Last week, at a performance under clear blue skies at Scottsdale Civic Center Mall, I eagerly took in the Native American cultural traditions and was impressed with its deep meaning and symbolism. Expressing these traditions through song, dance, and storytelling, Native Trails is now in its 15th year. It is sponsored by the Fort McDowell Yavapai Nation and produced by the Scottsdale Center for the Performing Arts. 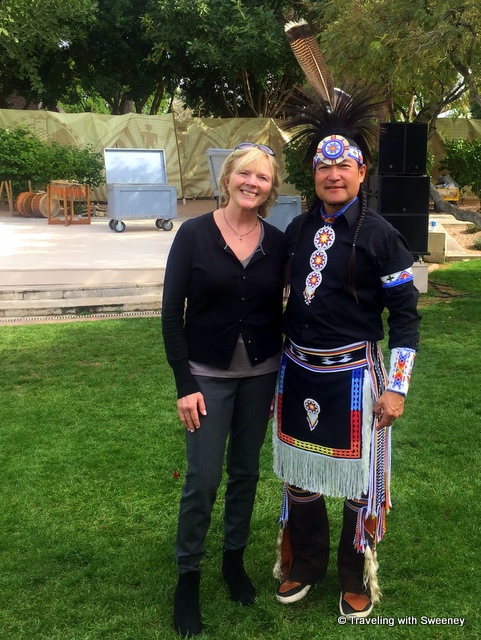 The early part of a new year is a perfect time for the festival as it is in keeping with the Hopi tradition of putting away musical instruments in December as the animals are asleep. After the new year in January, the instruments are sounded again. 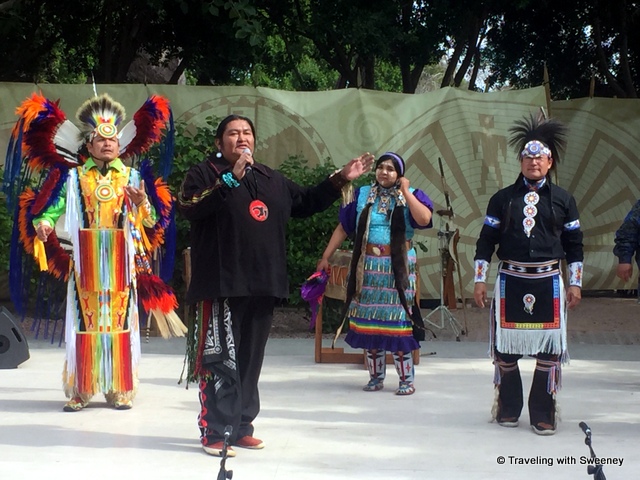 Expressions of cultural unity in song and dance at Native Trails

For one hour, we enjoyed vibrant dances that are a combination of specific symbolic movements and inspired improvisation. Each performance was introduced with enlightening and entertaining explanations. Many audience members listened and watched from their lawn chairs and picnic blankets. Others stood at the back or just stopped for a few acts as they strolled the mall. It was clear that they really enjoyed and were immersed in the music and dance. The many young children attending happily moved with the rhythms and enthusiastically applauded with the adults as each song finished.

A few of the very popular dances we watched were the “Eagle Dance”, “Men’s Lance and Shield Dance”, “Fancy Dance”, “Women’s Jingle Dress”, and “Fancy Shawl”. A lovely song called “Bluebird” was a highlight for me as well. I also thoroughly enjoyed both the colorful clothing, in many cases specially made for this festival, and learning about the significant amount of symbolism in the dances.

The finale was a great way to end the show and emphasize the theme of unity. The interactive “Round Dance” enabled all of us to join in. As the musicians formed in the center on the lawn, members of the audience held hands and moved in a circle around them. 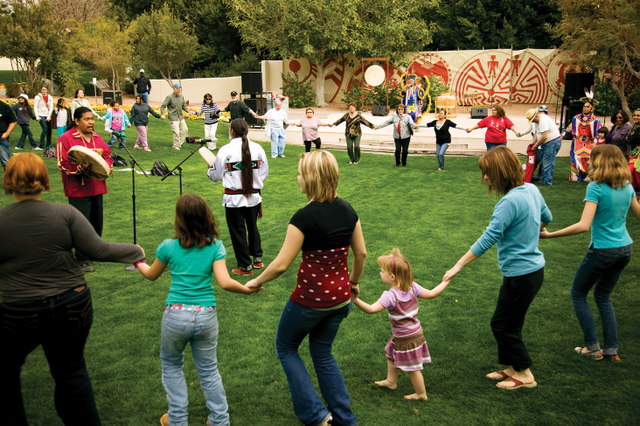 After the performances, the audience is invited to mingle and talk with cast members whose passion for their traditions and pride in their culture is evident in their eagerness to spend time sharing their knowledge and stories. 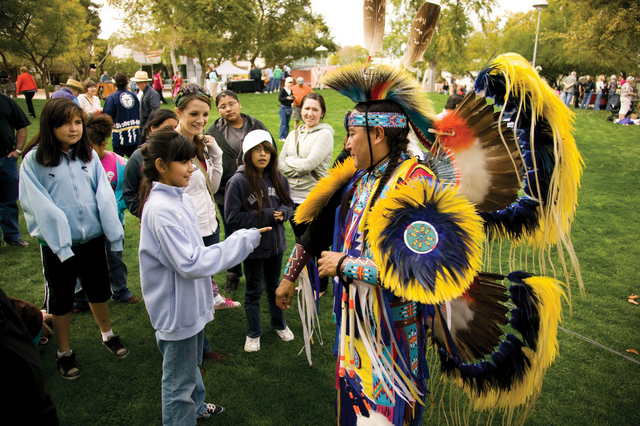 If you go, be sure to take advantage of the opportunity to speak to the cast. I loved listening to Derrick’s thoughts about the importance of music to the people of Native American nations. He described music being all around and part of their lives starting from the time they are in the womb. The music they make with their instruments establishes and maintains a balance with nature while asking the questions of creation and life that have been asked for thousands of years.

And there are lessons for all, such as the importance of respecting nature and other people and cultures. The young learn from the old and the old can learn from the young. We can all benefit by taking to heart messages instilled in the tribes and represented in the Native Trails festival.

Although we may come from different cultural backgrounds, as part of the same human family, we hold many common values. There is more that unifies us than divides us.

6 thoughts on “Celebrating Unity at Native Trails in Scottsdale”