Both Mr. TWS and I had looked forward to seeing the historic places of D-Day (June 6, 1944) in the Normandy region of France. These are the sites where the military forces of the United States, Great Britain, and Canada executed the largest amphibian invasion in history beginning their fight for the liberation of Western Europe in World War II. Although we’d heard much about how moving it is to visit these sites, we felt emotions even more deeply than expected. These are my top 5 recommendations for D-Day and Battle of Normandy sites to visit.

5 top D-Day and Battle of Normandy sites to visit

“Soldiers, Sailors and Airmen of the Allied Expeditionary Force. You are about to embark upon the Great Crusade, toward which we have striven these many months. The eyes of the world are upon you. The hopes and prayers of liberty-loving people everywhere march with you.”
— Dwight D. Eisenhower addressing the troops before the invasion of Normandy

It’s a humbling experience to visit the Normandy American Cemetery, 172 acres of land in Colleville-sur-Mer granted the United States by France in perpetuity. The cemetery is located on the site of the original burial grounds established by the U.S. Army on June 8, 1944 to bury their dead. On a tip from another traveler, we made a point to be at the cemetery in time for the daily flag-lowering ceremony. As we watched, there was a gun salute, taps were played, and two military jets flew across the sky above us. The ceremony added a special dimension to the moving experience. (The ceremony took place at 4:00 pm when we visited in early October, but the time may vary in winter and summer.) 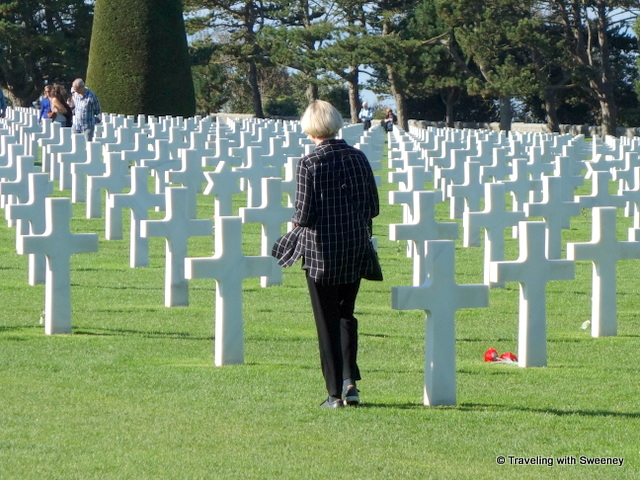 Quietly, we walked among many of the 9,385 marble markers of the graves of U.S. military who died during the D-Day invasion and the ensuing three months of the Battle of Normandy. We stepped from one memorial to the next, reading the inscriptions on the stones identifying the brave soldiers from all over the United States. 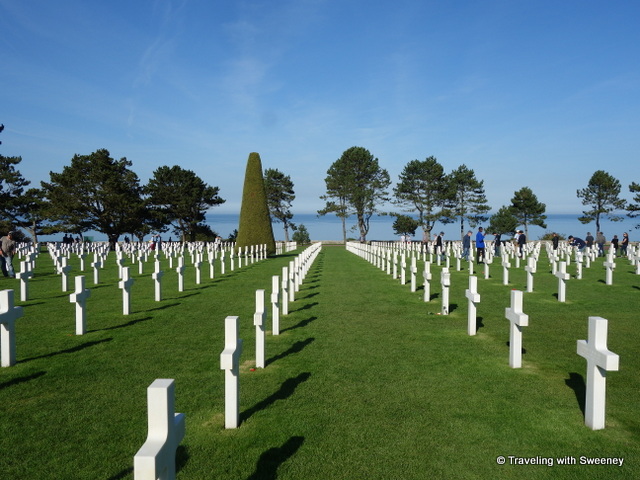 View toward the English Channel from the American Cemetery 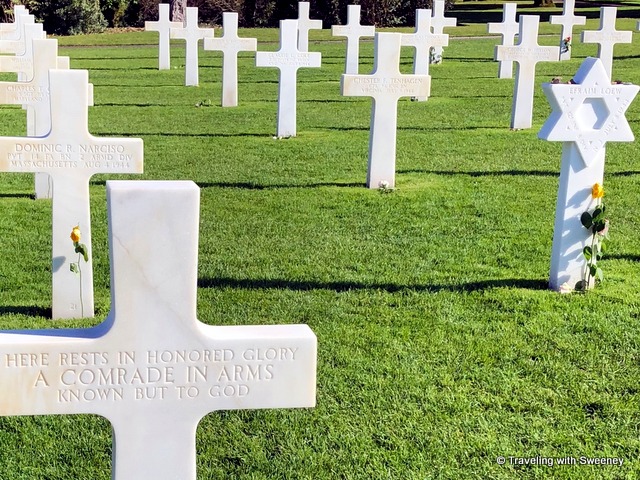 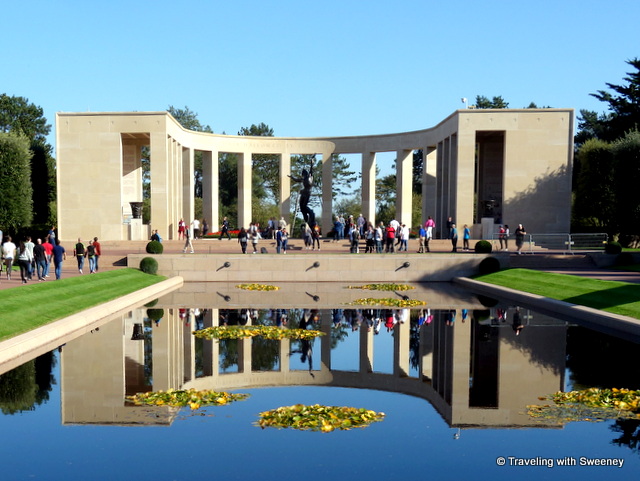 Monument at the Normandy American Cemetery

A semicircular monument and reflecting pool occupy a prominent location adjacent to the grave sites. In the center of the memorial is a 22-ft. bronze statue, The Spirit of American Youth Rising from the Waves by Donald De Lue, that is dedicated to the soldiers who were not found or couldn’t be identified.

Filled with emotion, we stepped onto Omaha Beach in Vierville-sur-Mer, walking at low tide on the same wide expanse of sand that U.S. troops crossed on D-Day. Of the five D-Day beaches (Omaha, Gold, Juno, Sword, and Utah), Omaha Beach saw the greatest casualties with about 2,400 troops killed, wounded, or missing in action. 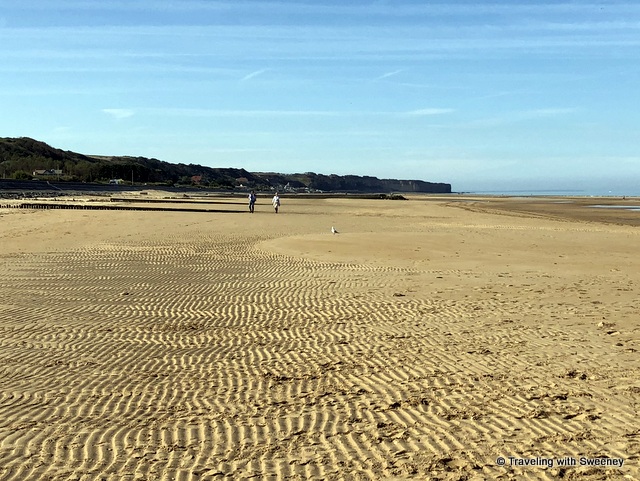 Les Braves (The Brave) sculpture was created by Anilore Banon (shown in the photo below) to represent three elements — The Wings of Hope; Rise, Freedom; and The Wings of Fraternity. 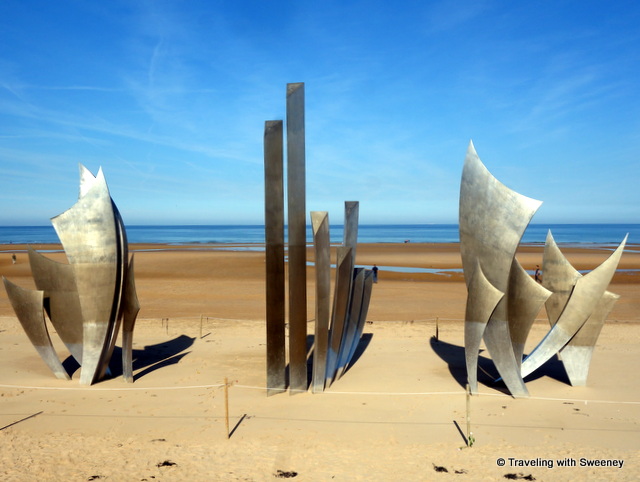 “It was unknowable then, but so much of the progress that would define the 20th century, on both sides of the Atlantic, came down to the battle for a slice of beach only six miles long and two miles wide.”  — President Barack Obama at a ceremony at the American Cemetery in Normandy marking the 65th anniversary of the D-Day invasion. 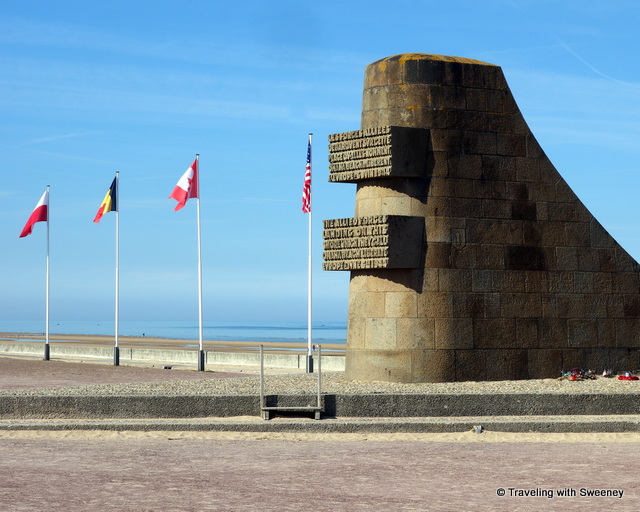 Omaha Beach Monument to the Allies

Our first stop of the day was at the village of Arromanches, a key location for D-Day operations. Standing on the clifftop above the village, we took in the vistas of the English Channel and remnants of the concrete caissons that formed the Mulberries, the artificial harbors built by the allies to facilitate getting vehicles and equipment to the shore. 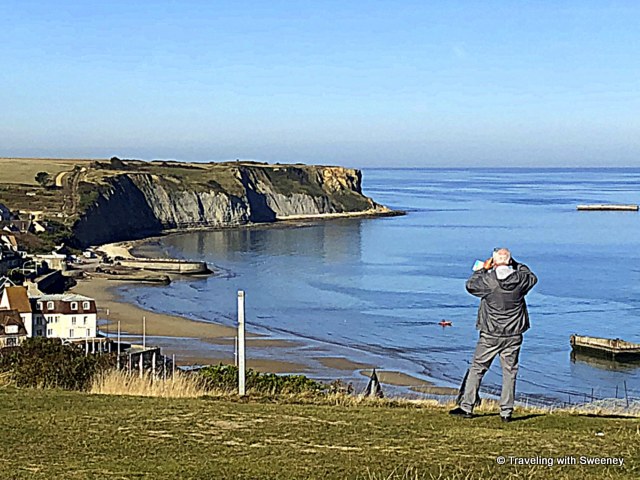 Mr. TWS on the clifftop overlooking the village of Arromanches and the English Channel

Looking in the opposite direction, we were able to view Gold Beach (shown in the photo below), one of the British landing beaches on D-Day. The British also landed at Sword Beach. In the photo, you can see a few of the concrete caissons to the left. 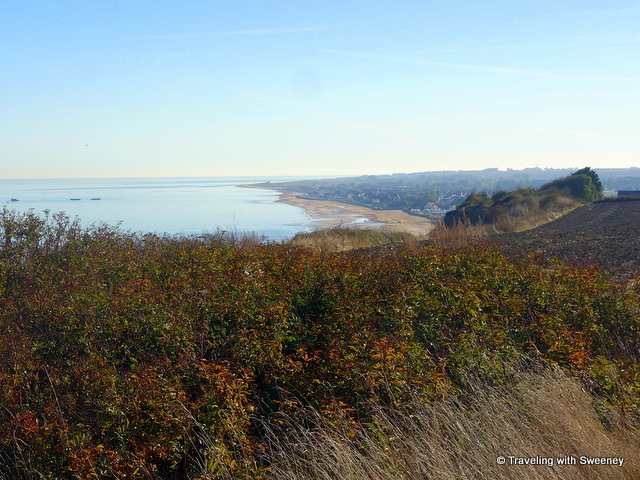 In the village of Arromanches next to the port, is the Musée du Debarquement (D-Day Landing Museum), a museum with interesting and well-displayed models, photos, and exhibits relating to the construction of the Mulberry harbor.

Driving between Arromanches and Omaha Beach, we stopped near the village of Longues-sur-Mer where we explored Batterie Allemande de Longues-sur-Mer, a German gun battery consisting of four artillery casemates and one lookout bunker strategically positioned for their views of the English Channel and Allied forces. We walked around, on top, and inside the concrete batteries built into the landscape. 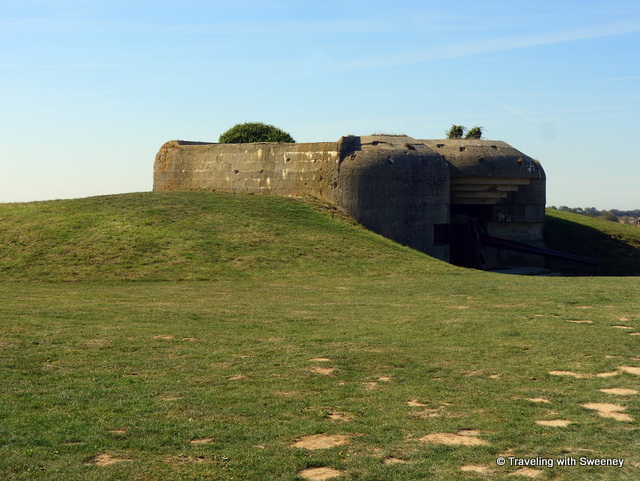 It’s chilling to stand inside a bunker next to a massive piece of artillery that had once been aimed at the Allies approaching on the channel. 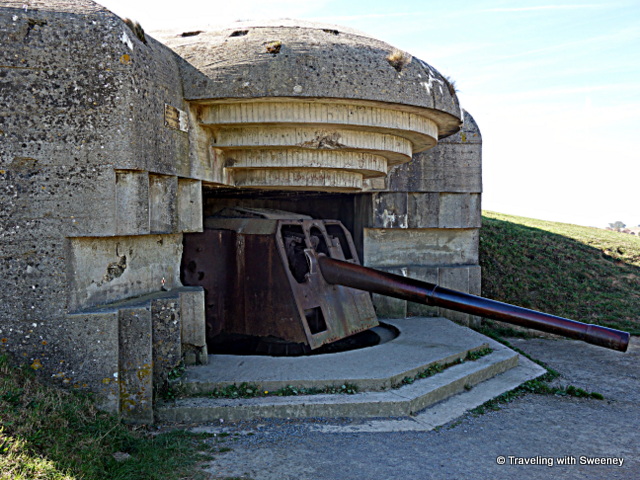 Bayeux was spared destruction during World War II and was the first French town to be liberated by the allies on June 7, 1944. Convenient to the D-Day beaches, Bayeux is a good place to use as your base as you explore the area. There are also interesting attractions to see here, too. 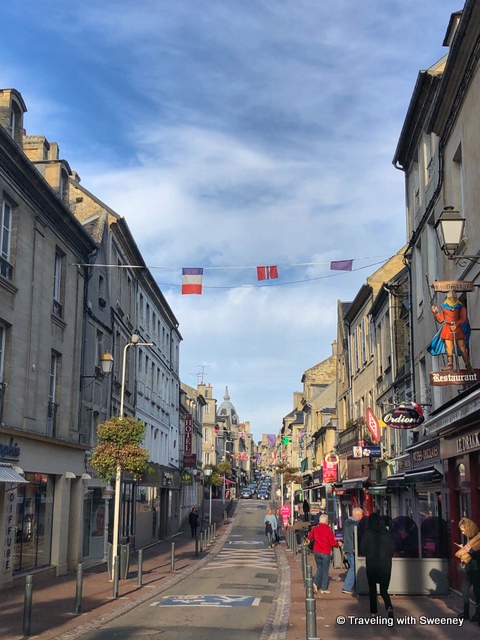 A quiet Saturday morning on Rue St. Jean in Bayeux

The Musée Memorial de la Bataille de Normandie (Memorial Museum of the Battle of Normandy) in Bayeux has a wide range of wartime gear of all kinds — uniforms, weapons, communications equipment, vehicles, and articles of the everyday existence of Allied and Axis soldiers. A film offered at the museum is a great introduction to the history of the D-Day invasion and liberation of Normandy. Nearby is the Bayeux War Cemetery with 4,848 graves of soldiers, mostly from the U.K. While in Bayeux, be sure to visit the Bayeux Tapestry (the famous 11th-century 68.3m long embroidered tapestry) and the Cathédrale Notre Dame (Cathedral of Our Lady). 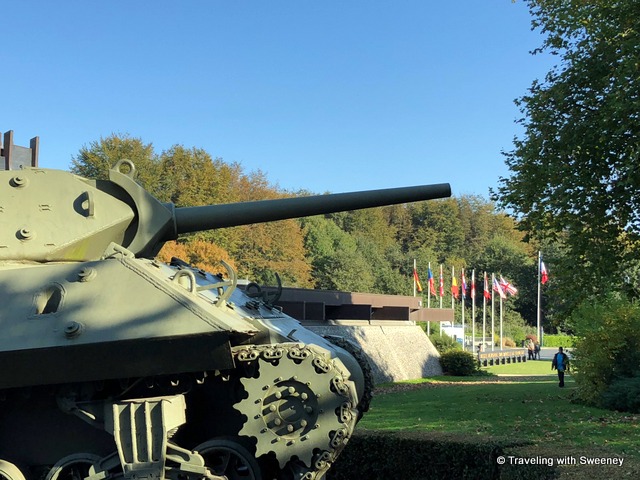 Of course, there are several other significant D-Day and Normandy sites to visit, such as Utah Beach (the second important American D-Day landing point), as well as several other museums in tribute to the military, civilians, and events of the Battle of Normandy and liberation of France. But we feel that we were thoroughly immersed in history, tragedy, and victory of this period of World War I with the important sites we experienced.

Accommodation tip: We stayed in Bayeux at the Hotel Lion d’Or. It is said that this was General Eisenhower’s favorite hotel when staying in Bayeux. We had a nice meal at the restaurant here on our first night. Mr. TWS still raves about their signature apple dessert.

Dining in Bayeux tip: My favorite meal in Bayeux was at La Rapiere, a small restaurant serving wonderful regional dishes in a charming building on a side street off of Rue St. Jean.

Bayeux social tip: La Gitane on Rue St. Jean is a good place to stop in for a drink and friendly conversation with the locals after a day visiting the D-Day sites. It was just a few doors down from our hotel.

Lunch in Arromanches tip: The Hôtel de La Marine is a lovely location next to the beach for enjoying lunch outside on the terrace.

Car rental tip: We rented from Hertz car rental at the Total Access petrol station in Bayeux (and returned it a few days later in Brittany). A taxi ride from the hotel cost about 8 euros.

You may find that a different sequence and timing fits your needs better, but this worked well for us.

7 thoughts on “Honoring Our Veterans and Fallen Soldiers in Normandy”