Look up the word “charming” in the dictionary and you’ll find a picture of Dinan, France.

Just joking, of course. But Dinan is, indeed, a town where “charming” is somewhat of an understatement. That’s why I’ve added this irresistible small town in the Brittany region of France to the list of my favorite places in Europe. This was our first visit to Brittany and based upon our experiences there, we’ll be back to explore more and possibly find more charming towns like Dinan. 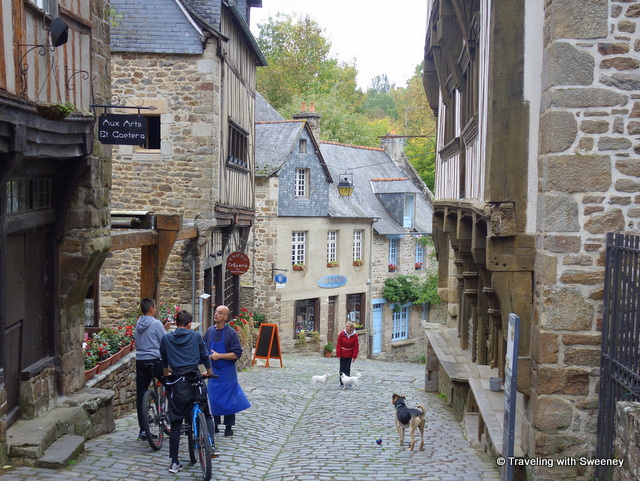 Locals going about their day on Rue du Jerzual

About 600,000 tourists visit the city of about 11,000 residents each year, most of them in the summer. I’ve heard that Dinan is also a popular weekend getaway destination for Parisians. Although we were not the only tourists during the first week of October, we mainly observed locals who were going about their daily routines, stopping to chat with shopkeepers, and walking their dogs.

7 of our top things to do in Dinan, France 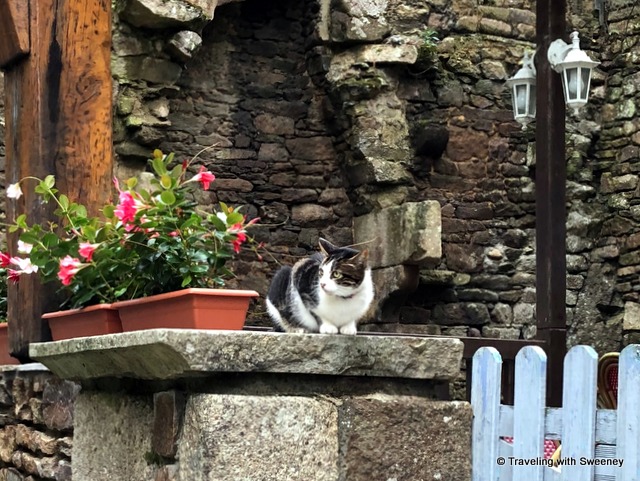 We had a number of memorable experiences in the short time (2 nights/1 full day) we had in Dinan, and I am happy to recommend these interesting and fun things to do in Dinan when traveling to Brittany.

Walk the cobbled streets and ramparts

Wear your most comfortable walking shoes for a day of walking in Dinan because that is the best way to see the most significant features of the town itself — the stone houses, half-timbered buildings, churches, the old port, ramparts, and paths along the river.

Walking around town seems almost magical and you are taken back to medieval times — the first mention of Dinan in historic documents goes back to 1040 AD. Dinan was fortunately completely untouched by WWII destruction. 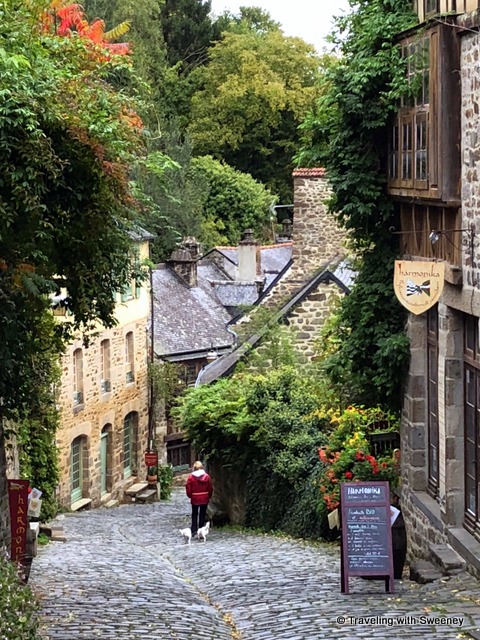 A woman walking with her dogs down Rue du Jerzual

We took our time walking down the steep cobbled street of Rue du Jerzual which turns into Rue du Petit Fort when you reach the port. The pretty decor of houses beneath the dense foliage and trees created one beautiful scene after another.

The 3km-long ramparts of Dinan consist of 5 gates and 10 towers. For some great views of the city and surrounding are, walk atop the walls and let your imagination go medieval! 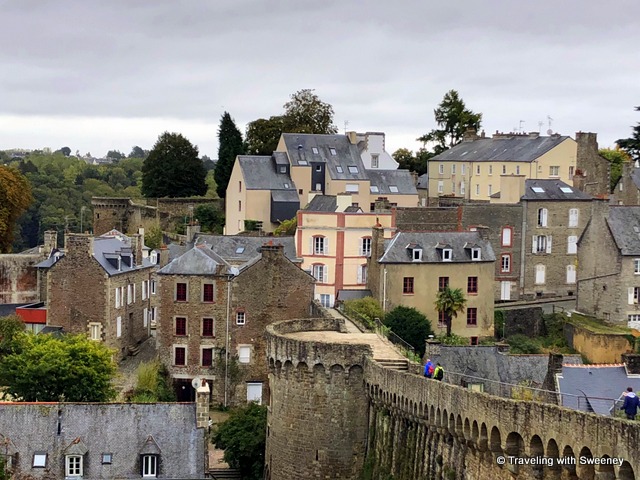 Walking along the ramparts

The half-timbered and stone building decorated with colorful shutters and flower boxes are a pleasure to admire as you soak up the charm of Dinan. 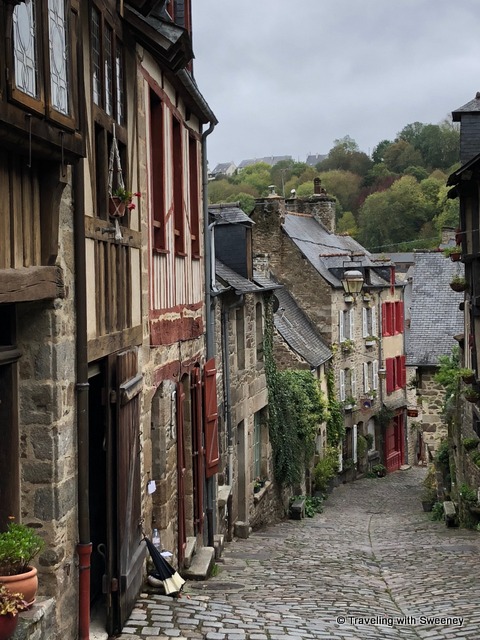 To feel a little serenity while walking around Dinan, spend a few minutes admiring the Basilique St. Sauveur, a blend of Gothic and Romanesque architecture, on Place St. Sauveur.  I particularly liked the interior with beautiful stained-glass windows and a 14th-century gravestone covering the heart of Bertrand du Guesclin, a 14th century knight who hated the English and battled to expel them. 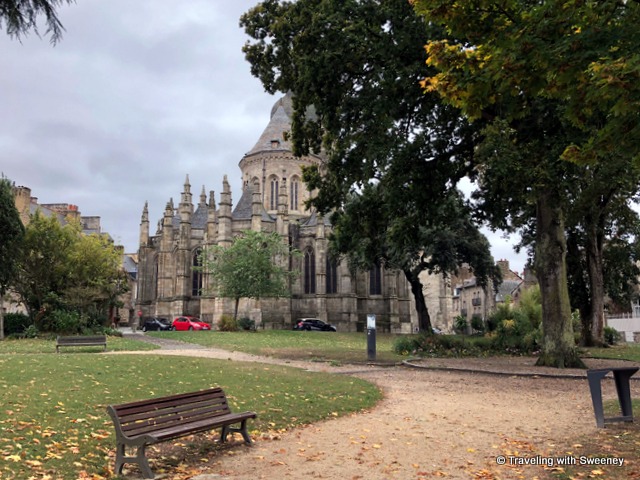 Just behind the church is the Jardin Anglais (English Garden), a lovely park that was once the church cemetery. I love parks like this in the autumn when leaves fall from the trees and settle onto the path.

Browse the galleries and shops

Dinan was awarded the designation as a Ville d’Art et d’Histoire (Town of Art and History) in 1986 by the French Ministry of Culture and Communication largely due to the prevalence of artists, sculptors, bookbinders, and glassblowers who live and showcase their works and the pride of the residents in their heritage. 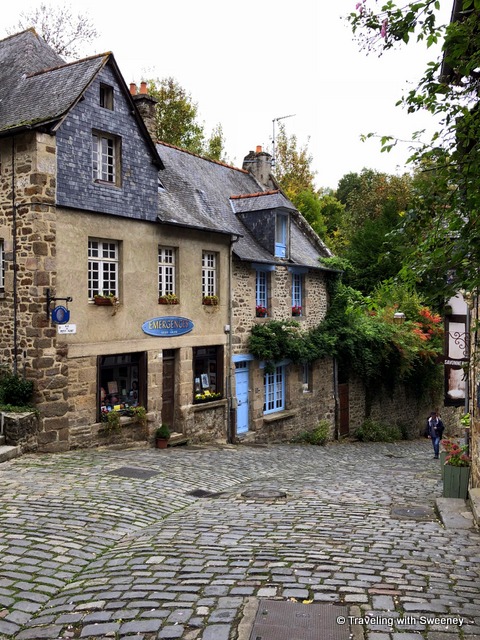 Antique shops and galleries capture your attention and tempt with their wares while you’re admiring medieval architecture.

Fashion design tip: Since 2016, the International Festival of Young Fashion Designers has been held in Dinan.

Take in the views

The Tour Ste. Catherine is a 16-meter high tower just past the English Garden where there are great panoramic views of the Rance River and the Port of Dinan. 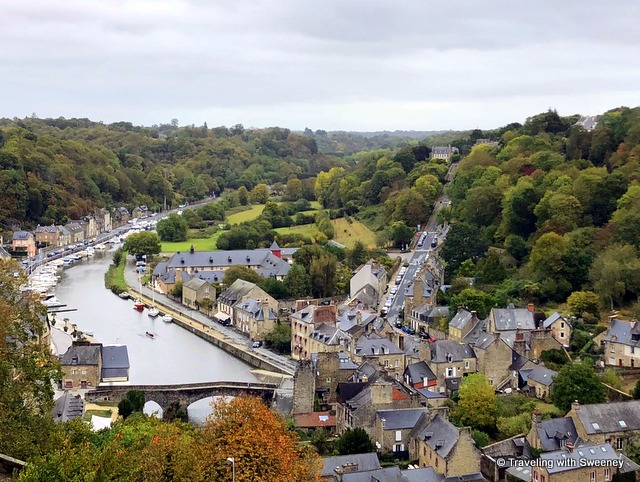 From various parts of the ramparts are wonderful views of the city (such as seen in the photo below). La Tour de l’Horloge (the clock tower) seen from the ramparts below is a 15th-century clock tower in the old city center. Visitors can climb the steps to the top for vistas of the city and surrounding area. 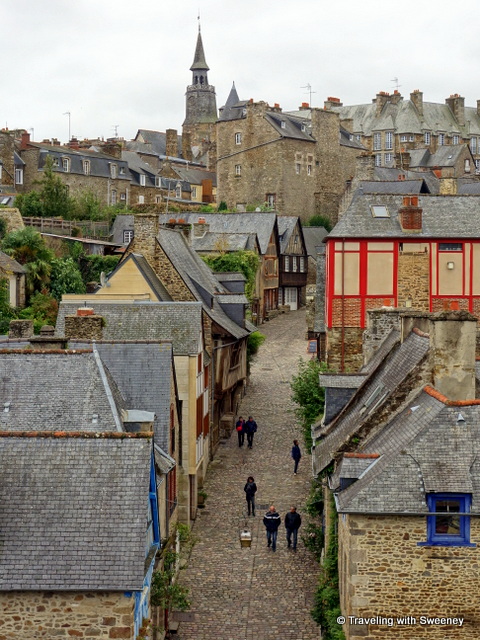 Stay in a medieval half-timbered building

One of the favorite aspects of our visit was our stay at La Maison Pavie, a bed and breakfast located in a historic 15th-century half-timbered house that was the birthplace and family home of a famous Dinan resident, French explorer and diplomat Auguste Pavie (1847-1925). Refurbished in 2010, the five guest rooms (each named after a town in Asia visited by Pavie) located on three floors are spacious and beautifully-decorated with elegant contemporary Asian themes. We thoroughly enjoyed our room, Angkor, which overlooked Place St. Sauveur and the basilica on one side and the inn’s garden on the other. 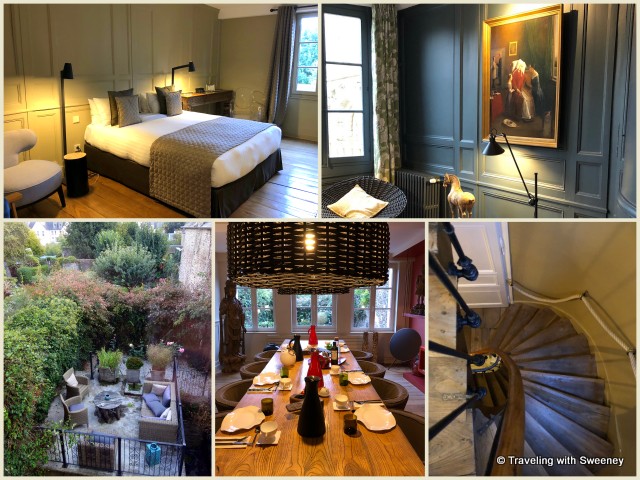 One of Jérôme’s suggestions, for which he made reservations for us, was at an intimate restaurant just a few minutes’ walk from the inn. It was really a romantic evening — appropriate since this trip was an anniversary gift to us belatedly celebrating our 27th wedding anniversary and a few days early celebrating 30 years together. It seemed extra romantic walking to and from the restaurant in a light rain. 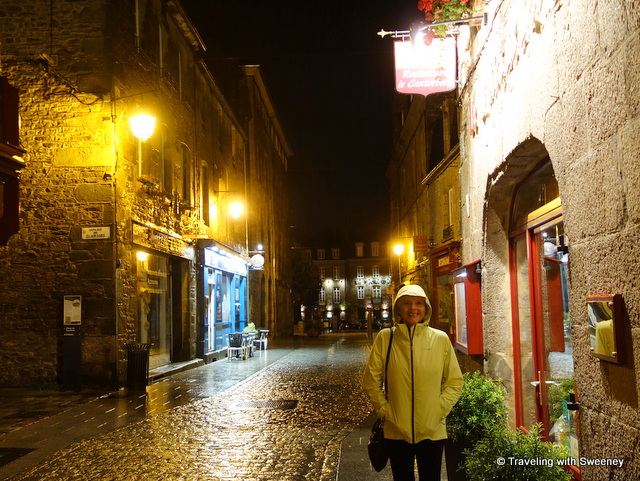 There was a welcoming feeling at Le Cantorbery as soon as we entered this 17th-century house on a quiet street near the old town square. We passed the full tables on both levels to ours by a flower-box window upstairs overlooking the narrow picturesque street below as a light rain was falling.  Entering the restaurant, we were warmly greeted and led to a window-side table upstairs as we enjoyed the aromas coming from the open fire oven. 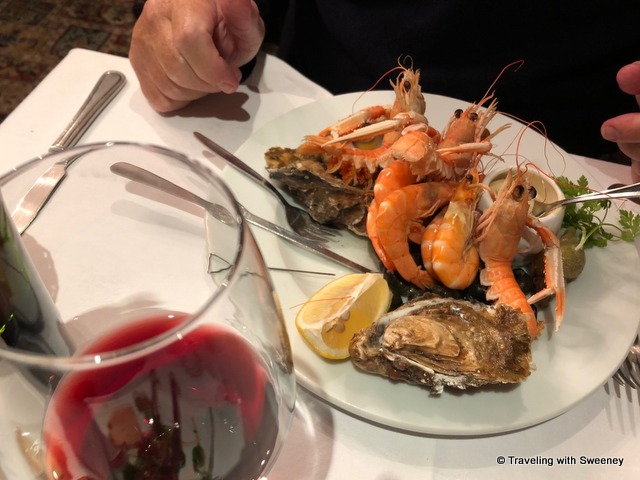 I chose other specialties of Le Cantorbery — a starter of foie gras, followed by main course of filet de boeuf (a tender filet grilled on the open fire). Although quite satisfied with the main two courses, we each had a creamy white chocolate glacé for dessert.

There are many crêperies, cafés, and bistros in the old town, along the cobbled hillside streets, and along the quay. While we strolled along the riverfront, we stopped for lunch on the river at an inviting-looking bistro, Les Terrasses. Our omelettes and salads accompanied by a glass of Muscadet were perfect on this overcast but warm day for fueling us for our activities 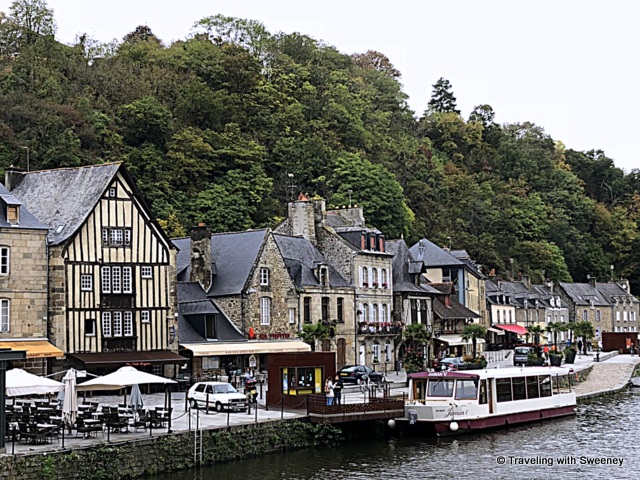 Pub tip: For a pint of Guinness or a glass of Bordeaux, stop into the lively Pub Saint Sauveur on Place St. Sauveur. The city of Dinan has a significant British expat population, so you’ll hear a mixture of voices speaking English and French as you sip your drink.

Walk the path to Léhon

Following another Jérôme tip, we took a beautiful walk along the Rance River to Léhon, a neighboring village of about 3,000 residents (and actually part of the commune of Dinan since the beginning of 2018). 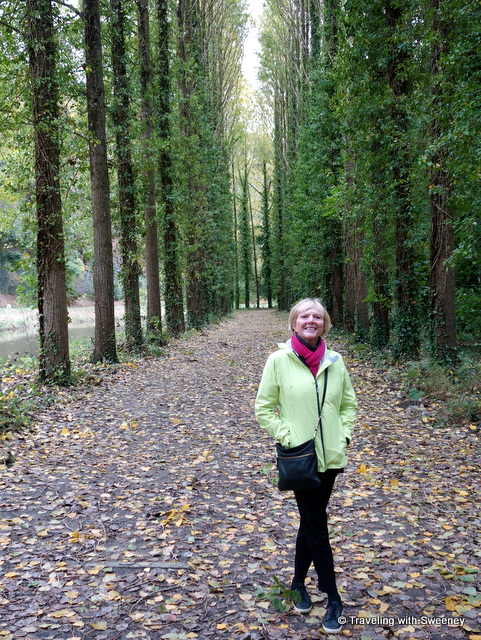 Along the tree-lined riverside path from Dinan to Léhon

In one direction, we walked on the dirt, leaf-covered path between the tall trees where we encountered only a few other walkers. Later, on the way back to Dinan, we took the path on the other side of the river which had more pedestrian traffic because of the smoother surface — each provided different perspectives and lovely views.

It was a nice addition to our activities, peaceful and providing beautiful views of the countryside and an approach to Léhon. 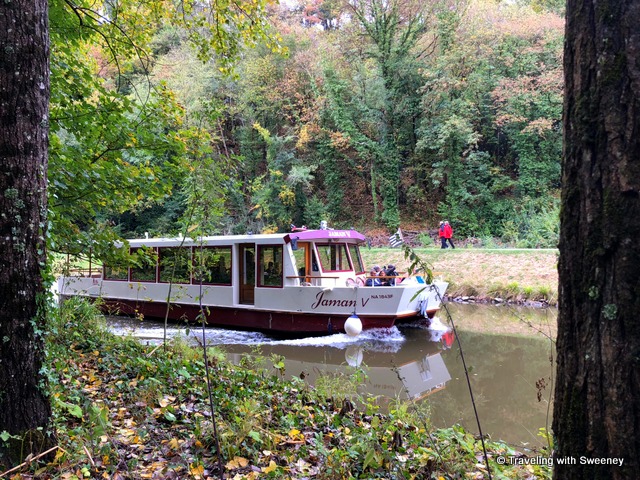 Tour boat on the Rance River

Boat tour tip: Along the way, a tour boat, the Jaman V, passed by. The one-hour tour begins at the Port of Dinan and cruises past the abbey. It looked like a relaxing and comfortable way to see the area.

Cloister of the Abbey of Léhon

The main attraction to visit in picturesque, medieval Léhon is the abbey, Abbaye Saint Magloire de Léhon, and its church, gardens, and cloister, presenting a combination of Gothic and Romanesque features. The original abbey structure was founded on this site by six monks in the 6th century, then rebuilt in the 12th century. It was further rehabilitated and rebuilt at various times and under varied ownership over the turbulent centuries. We walked through the gardens and cloister before entering the abbey where an art exhibition with an extensive collection of modern ceramics was taking place. The works were placed throughout the abbey (such as in the refectory seen below). 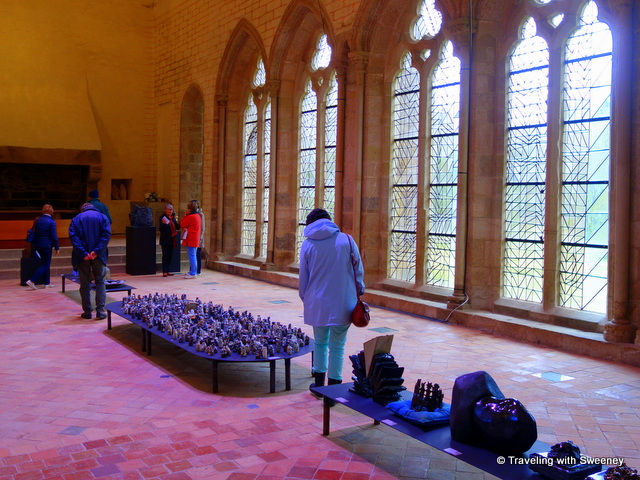 The remarkable stained glass windows of the refectory were created by Gérard Lardeur, sculptor and master glass maker. They were part of a refectory restoration between 1987 and 1991. 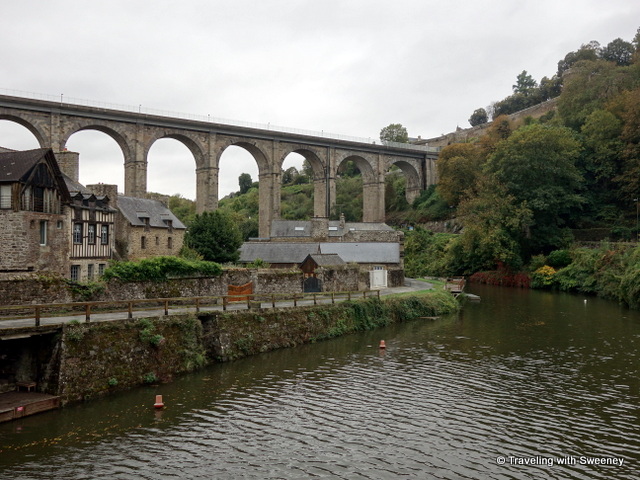 Returning from Léhon, we passed under the Viaduc de Dinan, the impressive 19th-century viaduct connecting Dinan to Lanvallay, on our way back to the Port of Dinan.

Take day trips to nearby cities and attractions:

We felt satisfied that we were able to see the highlights of Dinan, but know there’s more to do there (bicycle routes, festivals, day trips, etc.) warranting a return and longer stay. Here are a few day trip suggestions.

Mont St. Michel (about 58km) — We stopped at this famous island with a Gothic Benedictine abbey surrounded by a medieval village on our way by car from Bayeux (Normandy) to Dinan.

Perros-Guirec (135km) — We visited this area known as the Pink Granite Coast upon leaving Dinan to explore more of  Brittany. It is a wonderful place to hike and admire the Breton coast.

Since we only had one full day we decided to keep the car parked and stay in Dinan, so we did not personally take other trips outside of town, but would definitely try to include these cities and other nearby locations on a future trip: St. Malo (about 35 km), Dinard (about 25km), and Rennes (about 52km).

Train travel tip: Although we mainly traveled throughout Brittany and Normandy by car, many cities are easily accessed by train. Check out the official Oui.sncf website for information.

Festival tip: Get dressed up and celebrate medieval times for the Fête des Remparts which is held two days in late July every even-numbered year.

12 thoughts on “Charmed by Dinan, an Irresistible Town in Brittany”